"It is deeper than sadness": Thousands mourn at vigil for slain police officers in Dallas

After 15 hours of tension and horror, this one hour was a time to pause, reflect and mourn 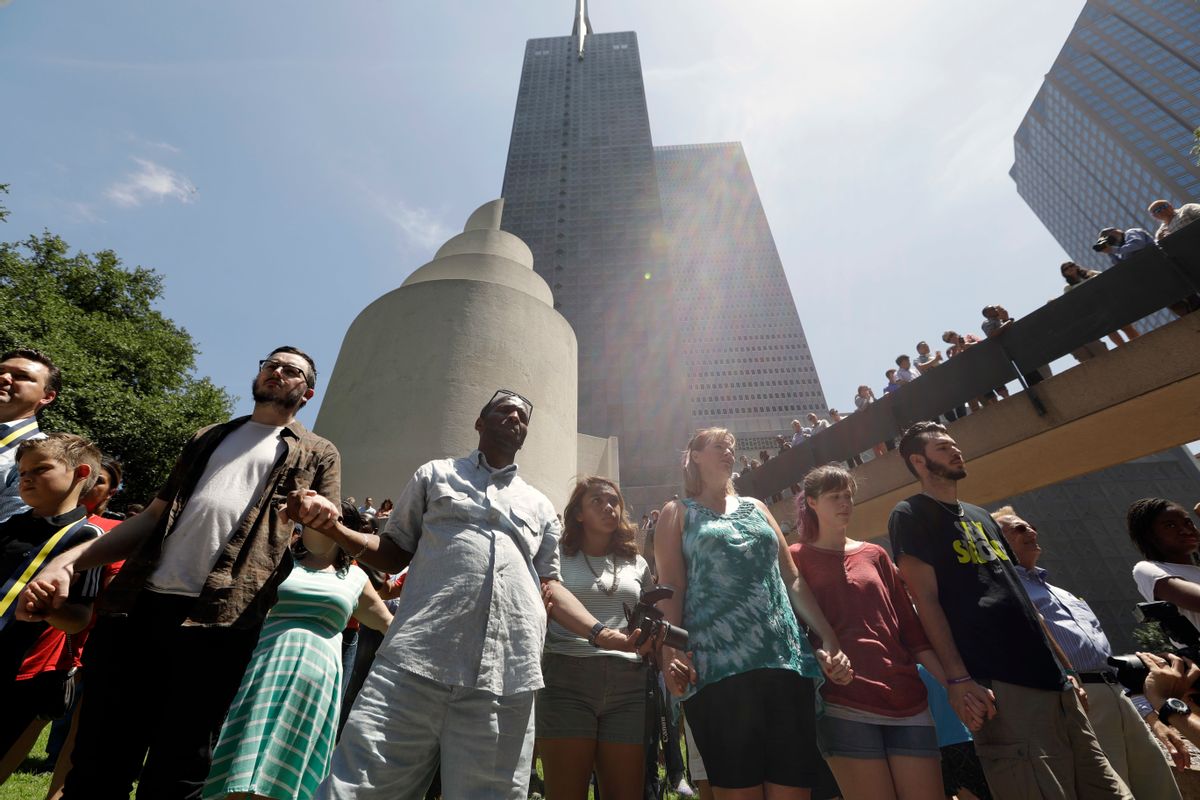 People join hands as they take part in a prayer vigil at Thanksgiving Square, Friday in Dallas. (AP)
--

Thursday night, Willie Range was watching TV at home in Oak Cliff, just a couple miles from downtown Dallas. Range, the chaplain of the Dallas Fire Department, saw a report that an officer had been shot. He immediately walked out his door, got into his car, and drove to Parkland Hospital, where several of the victims were being taken.

Over the next few hours, Range had the burden of telling two families that their loved ones — police officers — had been shot and killed by snipers in downtown Dallas.

The only way he can describe those moments: “Pandemonium.”

Range attended a prayer vigil at Thanks-giving Square on Friday afternoon, just a few blocks from where the pandemonium originated.

The sound of the helicopters flying overhead drowned out most of the notes of "Amazing Grace" being played by a band and many of the remarks and prayers from the speakers. The temperature climbed past 90, and Range was joined by an ever-growing crowd. Among the sea of news cameras and bodies were those who had been working the peaceful protest, which was followed by shooters targeting police officers. The officers’ long day finally ended in the early morning hours when the department sent a robot in to detonate an explosive, killing the gunman, 25-year-old Micah Xavier Johnson. So far, four Dallas Police officers and one DART officer were killed and seven other officers and two civilians were wounded.

For the city of Dallas, the past 15 hours had been filled with tense moments. For the crowd gathered at Thanks-giving Square, this one hour was a time to pause, reflect and mourn.

One of the first speakers was Dallas Police Chief David Brown, who has faced a great deal of criticism this year. The Dallas police force morale has been low, and many new recruits have left to take jobs in neighboring communities with better pay. But none of that showed when he stepped up to the mic.

“In the police profession, we’re very comfortable with not hearing thank you,” he said, but was then interrupted by a chorus of “thank yous” from thousands of people gathered around him. “So, today feels like a different day. Dallas is a city that loves. We’re hurting, and we need this community.”

Tanya Ragan, a downtown Dallas resident and local-business owner, was among the crowd. Over the past few years, Ragan has collaborated with the police department in her work growing downtown Dallas from a commercial center to residential neighborhood. “In the last several years, we’ve experienced a lot of growth, and during that time, we have relied so heavily on our police in transitioning to an urban city,” she said. “With that growth has come a really, really close relationship with the police. We really consider the police our family.”

Like most people in the audience, Ragan had only received a couple of hours of sleep as she worked through the night to calm neighbors’ fears and check in on friends. “These officers were out at a friendly protest, protecting our citizens, and they’re attacked from behind and targeted. It’s really difficult to even get your mind around how that is possible,” she said. Mayor Mike Rawlings took part of the blame for our country’s current poor racial relations. “This is on my generation of leaders,” he said. “We have led the next generation down a path of rhetoric that has pitted one another against each other.”

“So the Dallas Police Department officers being shot and killed and injured just amplified the feeling of sadness and grief,” she said.

Robinson’s office is on the second floor of the Jack Evans Headquarters. She left the vigil and went back to her office to answer calls. From her window, she watched the memorial in front of the headquarters grow. She said she’s spent time crying. She’s been angry. And there have been a few cuss words. She had yet to hear the names of all those killed and injured. When asked how that made her feel, she went silent, and her eyes welled up with tears. “It is deeper than sadness,” she said.

The No. 1 question she’s received today: What’s next for Dallas?

Ragan, who’s been working with city staff and the police department, asks that people not plan any more gatherings. Gatherings require resources from an already-taxed group of people. She recommends donating to organizations, such as Assist the Officer Foundation.

Back at the vigil, as the crowd left, a passerby placed a bouquet of roses on a running police car. Across the street, a police officer gave an interview to a local news station. Tears ran down her eyes. The reporter stopped, and they hugged. Next door, local restaurant, Café Izmir, offered free lunch to all officers. Down the street, a small crowd gathered to honor their fallen brethren. And at Jack Evans Headquarters, Robinson watched the memorial grow even bigger.

“We need to deal with some things that have been festering within our society that we have been trying to avoid,” she said. “Poor race relations are real. That’s not just black and white. That’s not just Hispanic. That’s not just majority and minority. That is a culture of a variety of people from various backgrounds. We have to learn how to get along here on this one planet Earth that we’ve been given. That is how people can help moving forward.”