Philando Castile becomes a tragic statistic in death, but to the people who knew him he was so much more 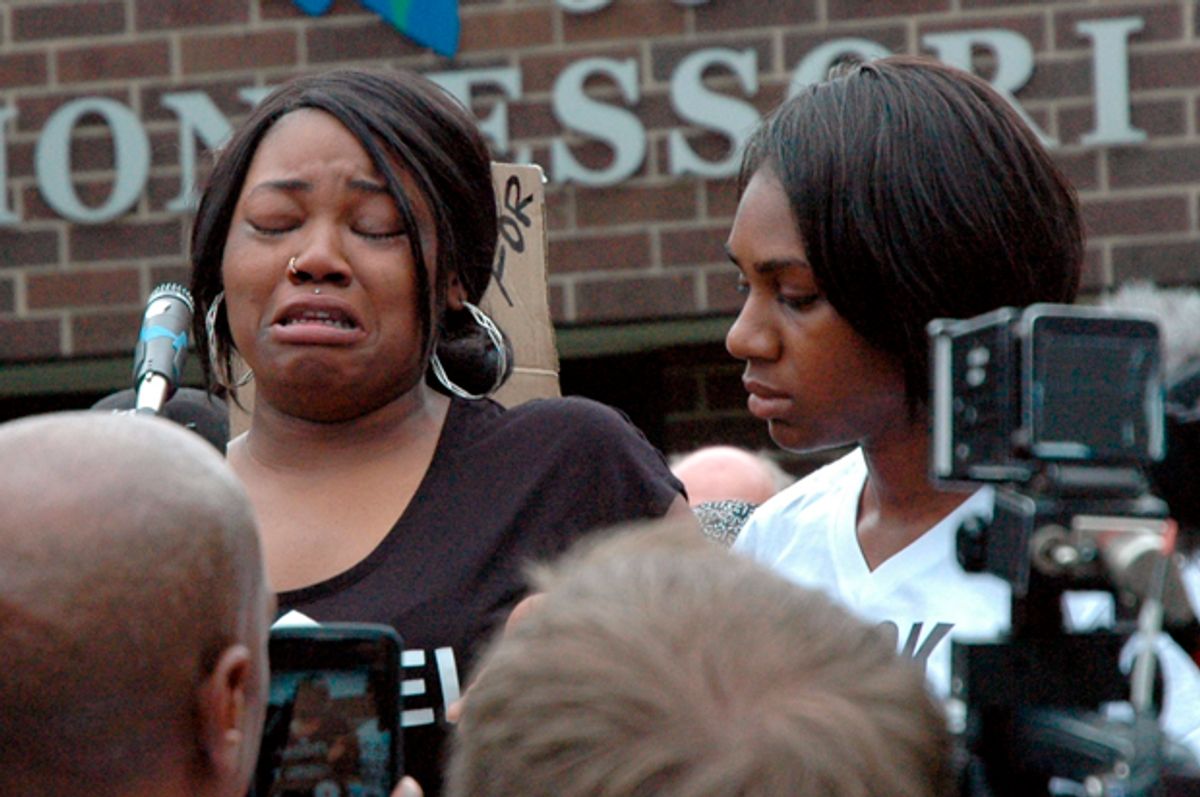 Allysza Castile, the sister of Philando Castile, who was slain by a police officer, speaks at a rally in St. Paul, Minnesota (Sheila Regan)
--

His name was Philando Castile, but the students at JJ Hill Montessori knew him simply as Mr. Phil.

Castile, 32, worked in the cafeteria and was known as a kind-hearted man who always had a smile on his face, and was always looking out for the children of the school, before he was killed Wednesday evening by a police officer at a traffic stop.

Coming just a day after the death of Alton Sterling, who was killed by police on July 5 in Baton Rouge, Castile is the latest in a long line of black men killed by police. With his death, he becomes an all too common statistic, but for the people that knew him, he was so much more.

If there was a kid that didn’t have much money in their account, he’d let them go through anyway, according his co-worker, Yagauma Meadows.

“He knew each and every one of the kids,” she said. “He knew their names. He was quiet, but he was really good with these children.”

Meadows was one of the thousands of people that gathered at JJ Hill in a vigil honoring Castile’s life on Thursday evening. After speeches by Castile’s family members, parents and staff of the school and district, friends and city leaders, the crowd marched to the governor’s mansion, demanding justice. Castile’s death drew immediate outcry after his girlfriend, Diamond Reynolds, who was in the car with her daughter when Castile was shot, posted a video in the immediate aftermath. She said her boyfriend was killed as he was reaching for his identification.

According to a statement from the Minnesota Bureau of Criminal Affairs (BCA), the agency conducting an independent investigation of Castile’s death, a squad car video of the incident has been collected as evidence, but that has not yet been released. St. Anthony Police Department officers do not wear body cameras, the statement said.

The St. Anthony Police would not respond to questions about the incident, and referred media to the BCA.

According to Reynolds, when you are licensed to carry a firearm you have to let officers know when you are armed. “The officer did not ask if we was armed, they did not ask if there were weapons in the car,” she says. “He asked for license and registration.” Castile reached for his license, she says, and stated that he had a concealed weapon, at which time the officer began to shoot, while saying “Don’t move!”

The BCA statement said that according to the Hennepin County Medical Examiner’s Office, Castile died of multiple gunshot wounds at 9:05 p.m. on Wednesday. His death followed a traffic stop in Falcon Heights, when St. Anthony Police Officer Jeronimo Yanez approached Castile’s vehicle from the passenger side.  “At one point during the interaction, Officer Yanez discharged his weapon, striking Castile multiple times. No one else was injured. A gun was recovered at the scene,” the statement reads. Officer Yanez as well as Officer Joseph Kauser have both been placed on standard administrative leave, according to the statement.

Sally Rafowicz, whose 9-year old daughter attends JJ Hill, calls Castile “Mr. Rogers with Dreadlocks.” He was the kind of person that could calm things down when there were behavior problems, she says. “He’s a very peaceful, gentle man.”

Tony Fragnito, the chair of the Parent Teacher Organization at JJ Hill, says that one teacher told a story of how Castile came through one day when she forgot to turn in her order for field trip lunches.

“He rose to the occasion because it was for the kids,” Fragnito says. “Everything Mr. Phil did in this school was for the kids. He had a way to bring up the student that needed to be brought up. If that kid walked in the building with a frown on his face, when he walked through the breakfast line, Mr. Phil was there to make him smile and put a little bounce to his step.”

Jeannine Coulombe, whose daughters both attend JJ Hill, says when her daughter, Bella, heard her school on the radio, she had wanted to know what happened. “I tried to find the words to explain it, but it was hard.” Bella had wanted to know more facts, so Coulombe found a news article that didn’t have images. “But he wasn’t just a black man,” her daughter had said in response to the news article. “He was loved by 500 kids!” While Coulombe found talking to her nine-year-old daughter about this tragedy heartbreaking, it was also necessary. “A part of me thinks that things are only going to change when more white folks are forced to explain things like this to their 11-year olds,” she says.

“I tried to find the words to explain it, but it was hard.” Bella had wanted to know more facts, so Coulombe found a news article that didn’t have images. “But he wasn’t just a black man,” her daughter had said in response to the news article. “He was loved by 500 kids!” While Coulombe found talking to her nine-year-old daughter about this tragedy heartbreaking, it was also necessary. “A part of me thinks that things are only going to change when more white folks are forced to explain things like this to their 11-year olds,” she says.

Philando Castile was the kind of person who, during a power outage at the school, made sure that children were still able to get food. “He didn’t freak out,” said teacher Anna Garnaas. “He says, ‘Come on, kids, get your food’ and he pencilled down every single six digit number of every single kid who wanted lunch and put it in later. He didn’t care. He loved those kids so much. He fist bumped them. He knew them by name. He gave them high fives.”

Castile was a father figure, not only towards the students at JJ Hill, but to his family as well. His sister, Allysza Castile, says that because she didn’t have a father, Castile took on that role.

“He wasn’t able to have any of his own before his passing, but every child here at JJ Hill was his child and I know that he loved them,” she said. “If you knew him you would love him. He just had a smile that would light up the room.”

Castile’s mother, Valerie Castile, called for a stop to violence by the police.

“He lived by the law, but he died by the law,” she said. “And it’s got to be a time where we all come together as a nation of people and demand that this stop.” Castile described herself as not someone used to speaking to crowds, but with her son’s soul inside of her, she found the strength. “Our nation is in trouble,” she says. “Our black children are on the endangered species list. Believe it our not, they are. They’ve been trying to kill us from a long time ago.”

Both the mayor of St. Paul, Chris Coleman, and the governor of Minnesota, Governor Dayton, offered apologies to the community for Castile’s death.

Dayton meanwhile, offered condolences to Castile’s family and friends, according to a press release. “I extend my deepest condolences to the family, friends, and community of Philando Castile. Our state today grieves with them,” the statement reads. The governor has also requested the U.S. Department of justice conduct an independent investigation.

Protesters chanted and held signs at the governor’s Mansion until late into the night Thursday evening.