"To break the shackles of gravity": How women's gymnastics captures our imagination every 4 years

Salon talks to the author of "The End of the Perfect 10" about the past, present and future of the Olympic sport 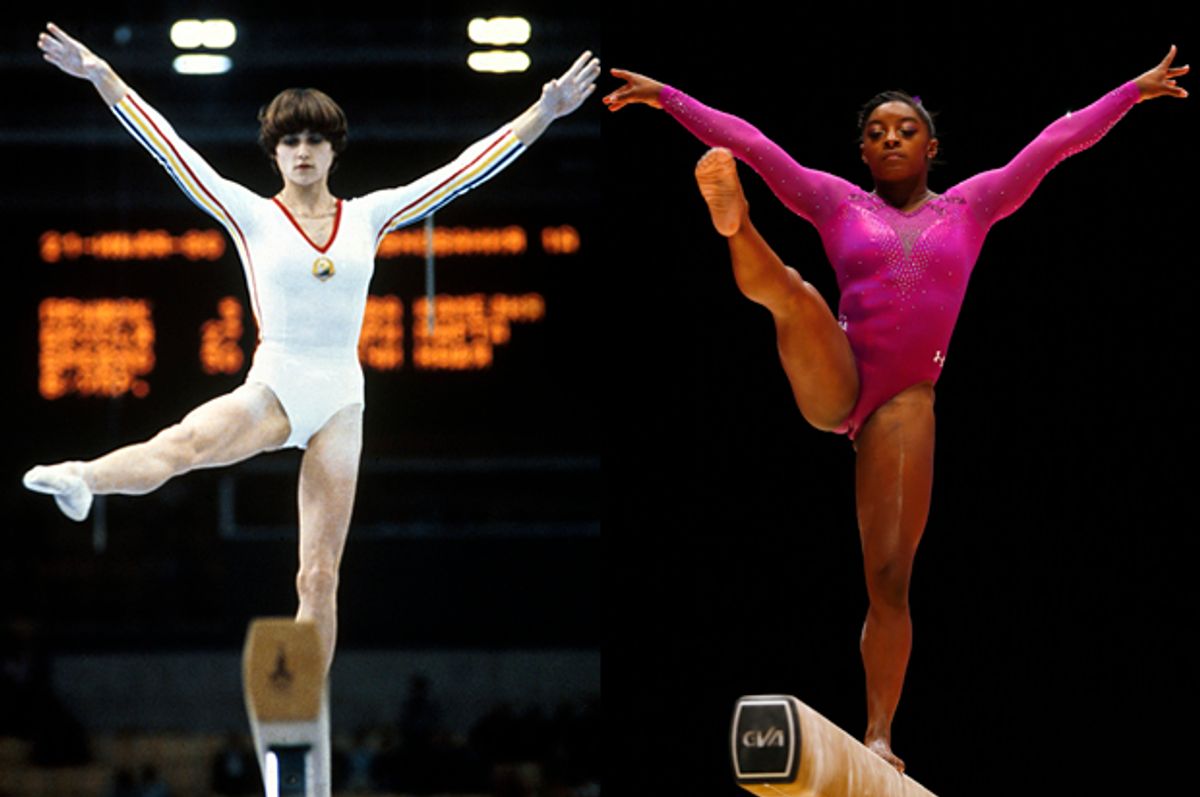 Dvora Meyers’ impressive and fascinating debut "The End of the Perfect 10" lands just in time for the this year’s Olympics. The 33-year-old Brooklynite and former gymnast became obsessed with the sport when she was 6. Gymnastics and break-dancing were unlikely pastimes for a nerdy Orthodox Jewish girl, perhaps why she dedicates the book to her mother, for driving her to practice early every Sunday morning. That dedication paid off,  not with medals but with a winning story about women like her, who were empowered by athletics.

Meyers, who covered the Olympics for Jezebel and Deadspin, explores the crucial time after Nadia Comaneci was the first to receive a perfect 10, the post-modern gymnastics world, and how this changes the sport’s international landscape. In the post-Comaneci era, the women’s sport is less focused on art and perfection, and more on athleticism and strength.

The first of its kind, "The End of the Perfect 10" contextualizes Olympic gymnastics, taking it beyond the marginalized category of "women's sport" to its deeper political relevance.

Salon spoke with Meyers about how women have shaped gymnastics and why she fell in love with the sport.

Though gymnastics is one of the most popular Olympic sports, there's little serious analytic reporting on it. Why?

I’ve often wondered why it hasn’t been taken seriously. I think because first of all it’s an Olympic sport, so it doesn’t, at least to outsiders, have this annual season and cycle. It’s something you pay attention to once every four years. Therefore the majority of sports writers and people writing about it for the Olympics may have only a passing knowledge.

I think what ends up happening is that you recycle the same stories of who’s big this year, who’s the new champion. It’s sometimes hard for people to get past that if they’re only paying attention to the sport once every four years, or even just once a year during a major competition, as opposed to really following it closely the way other sports, like football and baseball, are followed throughout the year.

I would also say that to some degree, it is a sport identified primarily with women. As a result, at least historically, that also gets trivialized. Then add the fact that the main practitioners of gymnastics are very young women, another group that may not get taken as seriously.

How does this shape the narrative of gymnastics?

It certainly shapes the narrative in that it’s seen as an Olympic sport. Earlier this year, when the UCLA gymnast Sophina DeJesus’s floor routine went viral, the majority of the articles about her stressed whether or not she had wanted to go to the Olympics, even though the NCAA has been around for a very long time, and it has its own competitions, set of rules, and priorities. It’s a head-scratcher, because they really don’t have much to do with one another, but that’s because people generally understand gymnastics through the prism of the Olympics.

What effect did changing the scoring system have on the sport?

One of the problems of the 10 is that often, because of the normal impulse to push boundaries, athletes took higher risks than they needed to, and weren’t being rewarded for it. The scoring approach is catching up to what athletes are doing. It’s interesting because if you look at Nadia in 1976, and Olga Korbut in ’72, in many respects the rules lagged behind the athletes. It was the athletes driving the rules forward.

Nadia did more than she needed to do, certainly, to win. There were few requirements when she was competing. Back then, there was this feeling that if you could do a little more, you should, because it will make you stand out. Even though she didn’t have to, she went for it anyway. In that respect, she and her coaches were pushing the sport forward. They had caught up to whatever the rules were and they went beyond that point.

There’s this impulse in high-level athletes to push the envelope as much as they can.

Do you think gymnasts will eventually reach a limit to what the human body can do?

I do think there is a limit. Will we see more difficult dismounts off the balance beam? One Olympic gymnast said to me, “I guess if you made the balance beam a little wider you could launch off of it with more power.” Some changes will depend on if there are any improvements to the equipment, and there have been a lot of developments over the years: springs in the balance beam, springs in the floor.

Many of the advancements in skills have come from a better understanding of training methods and injury prevention — though we still have a lot of injury. If there are more improvements in preparation methods you’d see some increases in difficulties.

Something I took away from speaking with Simone Biles is, even though she’s unique since she can do these mind-blowing skills, a lot of gymnasts do things in their gyms they’re never going to compete with. I hesitate to say we’re at the edge because I know that in training bases gymnasts are experimenting with more difficult skills.

Can gymnastics be enjoyed purely at an aesthetic level?

There are different levels of enjoyment. I would never say that it couldn’t, but I do think a lot of people are fascinated by gymnastics and are curious to know more than they’re getting from the typical TV coverage, which is not geared for that type of analysis.

That makes sense. Even as a former gymnast, I still wonder if I’m missing the real significance of the routines because I don’t know what it takes to do these tricks.

This is something I thought about because I’ve always wondered why some sports are more relatable than others. Gymnastics is one of those sports that’s not particularly relatable to the average viewer. With other sports, the difference between me to the professional is a matter of degree.

But most people have never done flips. So it’s not a matter of degree that separates the viewer — it’s on a whole different plane. That’s what makes it difficult for the average viewer to understand. When we watch other popular sports, they incorporate movements we all do.

Even a low-level participant of gymnastics who knows a lot still can’t fathom what that upper level looks like; we all struggle to understand that. There’s an element of the metaphysical — flying, and the desire to fly.