Before Tony Soprano, there was "Seinfeld": "It turns out we love nothing more than terrible people, but at that time it was unheard of"

Salon speaks to the author of "Seinfeldia" about the show's slow start, eventual rigor and continuing influence 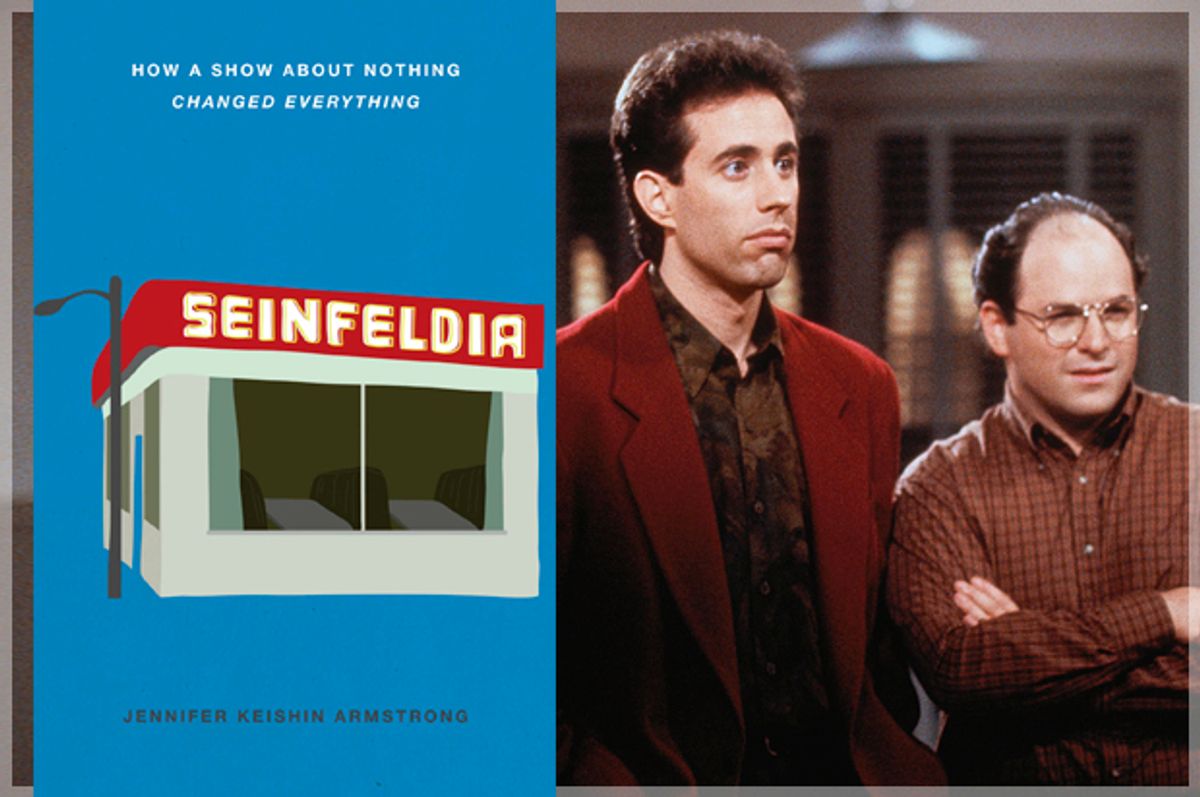 It went from unlikely and invisible to being one of the most written about – and for a while, overhyped – television shows in history. But now, almost two full decades after its final season, we have enough distance to assess “Seinfeld.” Jennifer Keishin Armstrong's new book “Seinfeldia: How a Show About Nothing Changed Everything” takes a detailed look at the making of the show, as well as the afterlife of its actors and fans.

“Seinfeldia” examines how the comic energy between Jerry Seinfeld and Larry David led to them scripting a show they dreamed up as a TV version of Samuel Beckett: Seinfeld described it as “Two guys talking.” In some ways, the show never changed – even if it became four people talking – but it also ended up subverting a number of television traditions during its nine seasons.

Salon spoke to Armstrong, a former Entertainment Weekly staffer who has also written a book about “The Mary Tyler Moore Show,” from New York. The interview has been lightly edited for clarity.

It’s funny looking back: “Seinfeld” is hugely popular, hugely influential. But when it started out, people were kind of worried that it would even survive at all, not just its creators but people at the network. What were they worried about and how long did they worry about it?

If you go back and watch the pilot episode, with no disrespect meant, I think you can see what they were worried about. It’s a little… It’s not all there yet. It’s funny, but it’s a lot quieter, the characters aren’t fully developed yet. And it doesn’t really seem like it has that specific point of view that we came to know as “Seinfeld.” It really was what they pitched, which is, you know, they said it’s two guys talking. It’s a lot more “two guys talking” and not a lot else. So, that’s the thing they were worried about.

But they liked Jerry Seinfeld, they knew that, that’s why they signed him. They felt like it was funny, they felt there was something there. If you go back and look at the show dates, it’s like there was one episode the first year ["The Seinfeld Chronicles," as the pilot was called, was released in 1989, almost a year before the next episode would air as "Seinfeld"], four episodes the second year, 12 the third. They were very cautious. So they were worried for some time in that sense. They were hedging their bets. They made the first season, and put them out in the middle of the summer to see how it went.

Specifically, your book says that they were worried it was too New York Jewish, right?

Yes, yes, exactly. It does have that. If there is a sensibility it has, it is, for lack of a better way of saying it, it is very specifically New York Jewish guys kind of talking about their neuroses. There's a lot of Woody Allen feel to the early ones especially, to the point that Jason Alexander said he auditioned as Woody Allen because he didn’t know what else to do. So that was what they were worried about, but it turns out, at least as the show developed, it really transcended [that]. I think that the more specific you are as a character and setting, as long as you’re doing a good job, the more universal it ends up feeling because it feels real. And I think that’s what came through to people.

The famous line about the show is one that you use in your subtitle — that it was “a show about nothing.” Where did that term come from and was it fair?

So that is from one of my favorite parts of the show, which is the arc when Jerry and George pitch a sitcom within a sitcom that is quite clearly, “Seinfeld.” But it’s called “Jerry,” and they pitch it to NBC, and they kind of use a lot of their own origin story in this plot. And “the show about nothing” really comes from what it is essentially a pithy, cleaned up, more zingy version of their original pitch, which was “two guys talking.” “Two guys talking” isn’t as funny to say.

But they came up with this idea that it was a show about nothing, it was about just your daily life. By all accounts of the people I talked to, it seemed like there were some regrets on this side of the show, that that phrase stuck so much. But you never know, and that really does sum up the show in one way. It’s what made it different. I mean, it did get a little wacky, but it wasn’t like “I Love Lucy” where they put her in these extraordinary situations that would never happen. It was about the irritations of everyday life. And that’s really what they meant by that.

That said, I think the reason a lot of people didn’t like the catchphrase is that they tackled a lot of issues. It was about real life, it was inspired almost exclusively by things that had happened to the writers, and so it doesn’t feel like nothing to [them]. That’s the whole point of the show, that it blows up these tiny things to be these epic storylines because that’s how they feel to us when they happen to us.

You describe the writing and the craft that went into every episode. I guess each episode was about 22 minutes if you take the commercials out, and it seems like the process was incredibly rigorous. Was there something different about the way the show was put together that made it successful, in other words, beside the fact that you had good actors and smart people writing it? Was there something else that contributed to it becoming the biggest comedy of the last quarter-century?

It had a really weird writing process that I don’t know if any other show had. They didn’t have a writers' room where everybody would get together and bounce things off each other. A writer would have to get four different storylines, one for each character, approved first. You’d have to catch Larry and Jerry, pitch them, and get then approved. Then you have a storyline, and you have to map them together. Then you have to bring them together at the end, which was kind of their signature thing.

Larry and Jerry would take your first storyline and smoosh is down: You had what you thought was 22 minutes of material, and they say, “This should all take place in the first third. Now go figure out the rest of the show.” That meant it was super densely packed with stuff. It moved and moved and moved.

Where do you see the influences of “Seinfeld” these days in shows that are popular? In the age of “Game of Thrones,” is "Seinfeld" still relevant?

I love thinking about it, especially shows like that next to each other. They’re both television. That’s weird.

Right, they really do seem like totally different art forms.

Yeah. “Seinfeld” wasn’t the first to do this, but it’s among the best, and it really elevated the form of television. Period. Larry David said, “I think this can be an art form. Not just stupid, throwaway trash.” So that’s the first part; he wanted to do something really smart and he proved that smart was mainstream, and that was a hard thing that NBC was resisting. They never liked to say it that way. It happened back in the ’70s too. They never have faith in America. America likes to feel smart, and this show helped do that and helped usher in an era where everything is trying to be smart, and art, almost to an exhausting degree.

So there’s that, and there’s also things like the antihero, which is a mainstay of our TV right now. It turns out we love nothing more than terrible people, but at that time it was unheard of. And this is four terrible people; let’s keep it real, you know?

They’re sympathetic in some ways but they’re sort of selfish and unpleasant as well.

Right. Tony Soprano gets most of the credit, but they proved it first that America is fine with that. In fact, they showed why it’s fun to have unlikeable characters: it’s because they can do things that you wouldn’t do. That’s why we like Tony Soprano, but that’s also why we like George Costanza.

I think there’s a self-consciousness to the show about TV and consumerism. Do you see that as well?

Yeah, for sure. I think in terms of the ’90s, it’s a real Gen X kind of show. We just loved that show. Even though it was made by Baby Boomers, it’s like the first that Gen X could sort of claim. That’s a very Gen X and ’90s approach, to have that super-conscious media-saturated feeling to it.

We were just talking about that arc where they make the show that is the show you’re watching. We see that constantly now — “30 Rock” — but at the time, that was another thing that wasn’t done as much. And now we’re so aware of television and how it works and we’re so proud of ourselves for being so smart, but this really did that first.

It also reminded me of another thing, which is that I think Larry David is among our first name-brand showrunners. People didn’t even know that word before. “Showrunner,” that’s a crazy word. The cool kids knew who Larry David was before “Curb Your Enthusiasm.” That’s something that’s now very common. We know who makes all of our shows, but that wasn’t as common back then.

Do you have favorite episode?

One of my favorites is a pretty early one called “The Jacket,” where Jerry’s jacket lining is pink and white stripes. There’s so many great things about this episode. It has the added bonus of having the only appearance of Elaine’s father. It’s true of all parents, when you get good parent characters — they kind of explain a lot.

And he has the added bonus of being based on the writer Richard Yates, too.

Yes, yes! That is the greatest part. He’s a cantankerous old author; what I love about it is the way it plays his masculinity against this new generation. “Why are you having a Coke? Real men drink Scotch!”