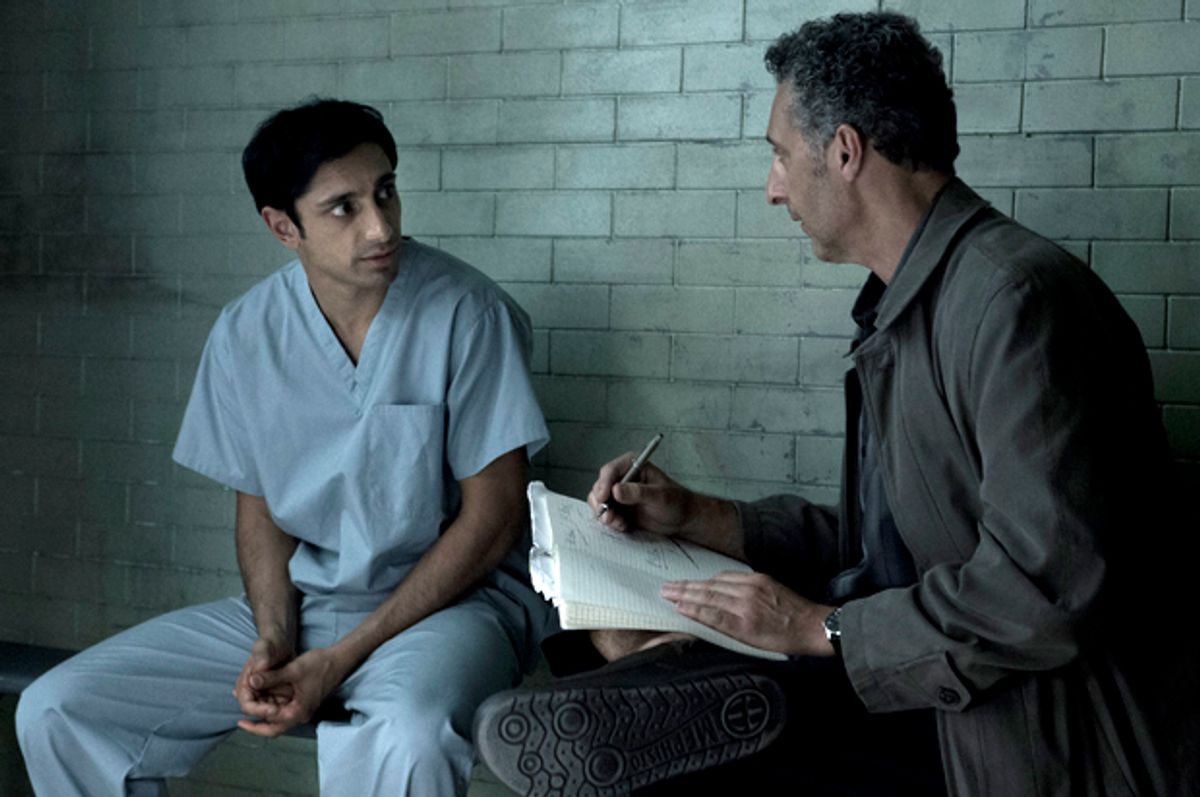 Riz Ahmed and John Turturro in "The Night Of" (HBO)
--

Aspects of HBO’s limited series “The Night Of” are reminiscent of TV’s recent glorious past, when the so-called Golden Age of TV was newly hatched. It’s part premium cable homage to one of the medium’s perennially popular genres, the police procedural, but also a nod to the glory days of the network itself. The miniseries’ co-creator Richard Price wrote for “The Wire,” in which “Night Of” castmembers Michael Kenneth Williams and J.D. Williams also starred.

Before a viewer connects those dots, though, a different and more familiar name pops up in the opening credits: James Gandolfini. Tony Soprano himself has an executive producer credit.

Gandolfini played a huge role in making HBO the standard-setter for quality television drama, and “The Night Of” was meant to be his return to television, this time as rumpled, luckless attorney Jack Stone, as opposed to a mobster with anger management issues.

Had he lived to star in “The Night Of,” which premieres Sunday at 9 p.m., adding to the schedule may have proven to be a neat feat of programming kismet, seeing that HBO is in desperate need of a decent drama to step into the chasm “Game of Thrones” leaves whenever it’s not on the schedule. The channel still has brand cachet going in its favor, but suffered a blow to its rep when “True Detective” flamed out in season two after a bright freshman round, and “Vinyl” died out of the gate. It’s about to bid farewell to “The Leftovers,” which was more of a critical favorite than a hit with viewers. In essence, HBO needs its next great drama. Frankly, it needed it yesterday.

When Gandolfini died in 2013, “The Night Of” was put on hold, seemingly fated to float in development limbo (where, until recently, “Westworld” also hovered). Robert DeNiro briefly signed on to take Gandolfini’s role, but ultimately had to depart the project, leading producers to cast John Turturro – an actor whose build and comportment are nothing like the man for whom the part was originally intended.

Yet Turturro’s portrayal of Jack Stone helps to elevate the emotional and cultural complexity woven throughout this eight-episode limited series, making “The Night Of” into something much more than a cop drama with premium cable aspirations.

Place special emphasis on the word “helps” in that previous paragraph. Turturro may be the most recognizable face in the ensemble, but he’s not the whole show. Without Riz Ahmed’s riveting performance as accused murderer Nasir “Naz” Khan, the opening episode could have been pedestrian, even barely watchable at times.

“The Night Of” follows Naz, a first-generation American born of Pakistani parents, from the moment he makes the life changing decision to sneak out to a party. It's a seemingly innocuous act for a young man, save for the fact that he takes his father’s taxi without obtaining permission.

His plans change when a beautiful girl (Sofia Black D'Elia) gets into the cab’s back seat and persuades him to spend the night with her instead. Their intoxicated interlude ends with him blacking out and waking up in her kitchen, only to discover that his one-night stand has been savagely stabbed to death. Every panicked decision Naz makes afterward buries him more deeply as the cops, led by legendary Detective Dennis Box (Bill Camp), gather more evidence implicating his guilt.

Ahmed, a relative newcomer, plays Naz at first like a calf rushed toward slaughter, blindly shuddering and stammering his way through the night in question and every moment that comes afterward. Circumstances crush him into something harder, but infinitely more lost.

That happens long after Turturro shuffles onto the scene, near the end of the pilot. From the moment he and Ahmed come together, “The Night Of” gains propulsion, powered by each actor’s respective talent for evoking poignancy. They’re deeply affecting in partnership, while also ably shouldering their respective halves of the story as the story progresses.

“The Night Of” is inspired by the five-episode first season of BBC’s “Criminal Justice,” which was created by screenwriter Peter Moffat, though it trades in a British kid for a wide-eyed business major living with his parents in Queens. Many structural elements remain the same, in that it takes us through a murder from every angle, from the beat cops and detectives building the case to the prosecutors and defense attorneys doing their best to destroy or free the accused.

The most moving moments take us into the lives of Stone and his client, Naz. Both Naz and the UK character upon which he was based (played by Ben Whislaw) come from working class families and fit the classic good boy archetype. He’s hard working and awkward, well-liked but socially on the fringes.

Turturro’s Stone lives with a terrible skin condition that makes him unable to wear closed shoes, adding to his abrasive personality. He’s accustomed to being underestimated; his ruddy, peeling feet and cheap outfits disgust people before he even starts talking, and his knowing this colors every interaction. Even his son is embarrassed by him.

But Stone and Naz are of a kind, both lost causes most are reluctant to champion, let alone touch. That Stone lands Naz’s case at all is chalked up to being in the right place at the right time. Meanwhile, Naz being a Muslim in post-9/11 New York adds a level of cultural and political fallout to his nightmarish journey, a facet lacking in the UK version.

“The Night Of’s” premiere clocks in at about 25 minutes longer that the first installment of “Criminal Justice,” which one could chalk up to the premium cable channel’s penchant of allowing auteurs to reveal character and plot detail at a luxurious (some would say plodding, if this weren’t HBO) pace.

But in this instance, there’s tremendous value in seeing Naz interact with his loving parents (Peyman Moaadi and Poorna Jagannathan) before he decides to sneak out in his dad’s cab. The crime he’s suspected of committing is a headline generator: a young man of Middle Eastern descent driving a cab suspected of butchering a rich white girl in one of Manhattan’s nicer neighborhoods.

Not only does Naz land a starring role on the cover of New York City’s tabloids, but Nancy Grace relishes passing judgment on him every night. Worse, it makes him a celebrity in Riker’s Island, where he falls into the hands of a convict at the apex of the jail’s social structure (Michael Kenneth Wiliams). The trial’s annihilating impact on his family only deepens the tale’s pathos.

In the midst of all this are a few humorous and humanizing elements, many of them involving an odd, somewhat symbolic subplot involving an abandoned cat that nobody wants, yet somehow insinuates itself into a main part of the story.

HBO subscribers can currently view “The Night Of” premiere on the channel’s online streaming service HBO Go, a smart tactic on HBO’s part given the episode’s deliberate pacing. Price and his co-creator Steven Zaillian (best known for writing “Schindler’s List”) lead us through every minute detail — every pause, misunderstanding and random interaction — that conspire to become the worst night of Naz’s life.

Zaillian, who directed the premiere, demonstrates an obsession with process that plays out in each episodes visuals. The camera hovers closely to Naz at every passing moment, at times glancing away for tight shots on the faces of passers-by who may or may not matter later on, or changing perspective to evoke a sensation of car crash voyeurism as Naz makes one bad decision after another.

The extra time Price spends guiding us into Naz’s life before the crime works pays off in later episodes, when the viewer is forced to confront the notion that the doe-eyed Naz might not be everything he initially seems to be.

Then again, maybe he is. That’s the trick “The Night Plays” on us; are we so keen to empathize with Naz that we don’t realize that his perspective might be unreliable? Or is the prosecution, led by a hardened district attorney (Jeannie Berlin), simply doing a great job of persuading the viewer and the jury to see things her way?

Immensely satisfying performances from the ensemble cast make this sense of ambiguity even sharper, particularly Camp, who plays Detective Box with a subtlety that leaves the viewer wondering as to his true feelings about his primary suspect. Glenne Headly also stands out as a polished, high-powered attorney who sees a PR opportunity in Naz’s case, which makes her only slightly less sharkish than Williams’s convict, whose designs on Naz grow more sinister with each passing chapter.

Tremendous portrayals by top-shelf talent are part of the HBO’s brand identity, key ingredients that made its finest dramas stand out on television. “The Night Of” has all the markers of being a drama evocative of what’s best about the medium. Even if it is a miniseries, it at least proves that HBO is still capable of delivering something distinct, powerful and true.