Marketer-in-chief: Is Donald Trump only running for president to exploit the business opportunities? 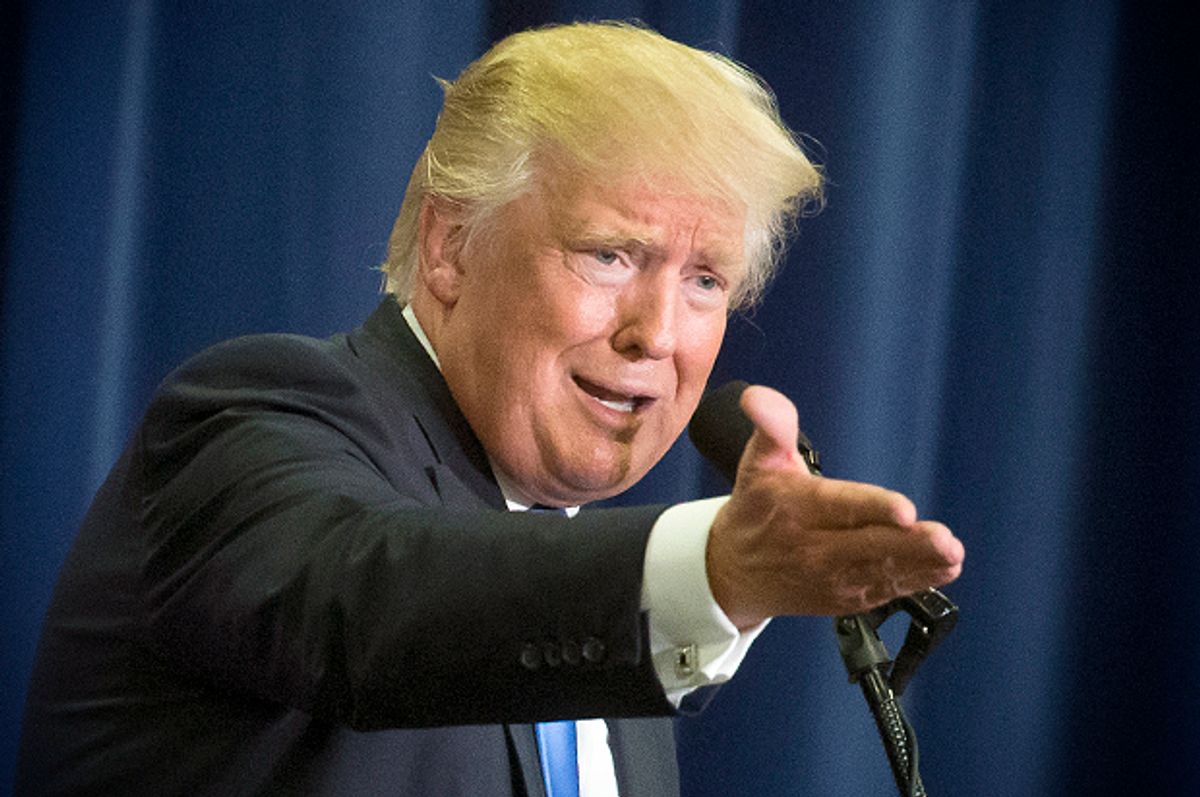 Could it be possible that Donald Trump’s entire presidential candidacy was cooked up out of a grand marketing scheme?

It sounds like a wild conspiracy theory. But then there it is, right before our very eyes. Again and again, we see Trump standing before the global media cameras knowing full well that he would receive wall-to-wall coverage, and instead of talking about policy, he shamelessly hawks his own Trump products.

This may be the greatest free marketing campaign of all time.

A recent example of this was on full display with Trump’s surreal news conference at his golf course in Turnberry, Scotland. Trump was not in Scotland to meet with any foreign dignitaries. No, nothing like that. Trump flew to Scotland to attend the opening of his golf course.

Only hours before, Britain had plunged the world into turmoil with the Brexit vote to leave the European Union, but Trump had more important matters to announce to the world. Trump stood before the global media assemblage and delivered a lengthy sales pitch all about the luxury features of his new golf course.
“The hotel is built to the absolute highest standards of luxury,” he declared, “and the course is built to the absolute highest standards of tournament golf.” He described the new “incredible” luxury suites. “You should try and get to see the suites,” he continued, “because they are two of the most beautiful suites you’ll ever see.” He described the brand new sprinkler system and the several redesigned golf holes in his typical superlatives like “spectacular,” and “the greatest par 3 anywhere in the world,” and on and on.
He sounded like a used car salesman pitching brand-new tires and a recent paint job. But from a marketing perspective, Trump’s sales pitch for his new golf course reached millions of people all around the world, for free.
This spectacle was eerily similar to the bizarre infomercial press conference Trump put on a few months ago after his primary victories in Mississippi and Michigan. Trump took the podium in front of the media, but this time, he was surrounded by display racks filled with Trump products that are for sale to consumers. Cases of wine from the Trump Winery were on display. Crates of Trump bottled water were stacked up. Cuts of Trump steaks were carefully arranged on a wooden cutting board. Copies of Trump magazine were on hand. And then Trump crassly began hawking his products. He held up before the media cameras a recent issue of Trump magazine and proclaimed it to be “great.” He pointed to the racks of wine bottles and claimed that he makes “the finest wine, as good a wine as you can get anywhere in the world.” He declared that his winery is “the largest winery on the East Coast” and that it is “one of the great vineyards of all time.” Never mind that Trump himself does not drink alcohol. On display for all to see was a real huckster eager to sell anything to anyone who is gullible enough to fall for the sales pitch. Here was a guy who was simultaneously selling bottled water along with a presidential candidate.But perhaps Trump has in mind an even larger marketing strategy.Trump’s next major real estate development project is the October grand opening, just in time for the presidential election, of a new luxury hotel right in Washington, D.C., in the old post office building on Pennsylvania Avenue just down the way from the White House.What better way to guarantee a stampede of customers for his new hotel than to be elected president? Just think of the possibilities here.

If Trump were elected president, the hotel bookings would be through the roof. Anyone and everyone traveling to Washington, D.C., to conduct official government business would, of course, wish to curry favor with the president of the United States, and one convenient way to achieve this would be to lodge their entire visiting delegation at the very hotel owned by the president.

President Trump would certainly know who was staying at his hotel – and who was not – and thus he would know full well who was or was not favoring his establishment.

Nothing needs to be said. No arrangements need to be made. No express quid pro quos are necessary. It's simply obvious. Everyone will know that if they desire favors from President Trump, they must patronize Trump properties and buy Trump products. And just think of all the possibilities for large events at the hotel. What a fantastic opportunity for lobbying groups, industries, corporations and even individuals to funnel money to the president by selecting the president’s hotel for industry conventions, corporate functions and personal weddings. Come to think of it, these wonderful opportunities would not be limited to only Trump’s one hotel in Washington, D.C., but would apply to all of Trump’s properties around the nation. And around the world as well. President Trump would certainly know who was and was not booking events at his properties nationally and internationally. In fact, these wonderful opportunities would not be limited to only Trump’s hotels and golf clubs, but would apply to all of Trump’s products. National restaurant chains could begin offering Trump wines and steaks, retailers could start selling Trump ties, and just about anyone could start stocking Trump bottled water. The possibilities are endless. Perhaps Vladimir Putin could make a deal to begin importing Trump products into Russia. It is a marketer’s dream.Trump says that there would be no conflict of interest with his businesses if he were elected president because he would officially step down from his company and his adult children would run the business.Seriously? Does anyone actually believe this? The company is a private, closely held family business, and the money from the business would still flow into Trump’s immediate family. Does anyone actually believe that President Trump would have no idea what was going on inside his cherished business being run by his very own children?C’mon.
Anyone who falls for that pitch deserves President Trump.