Not Quite "Brazil": Meg Ryan, plastic surgery and my mother’s augmentation 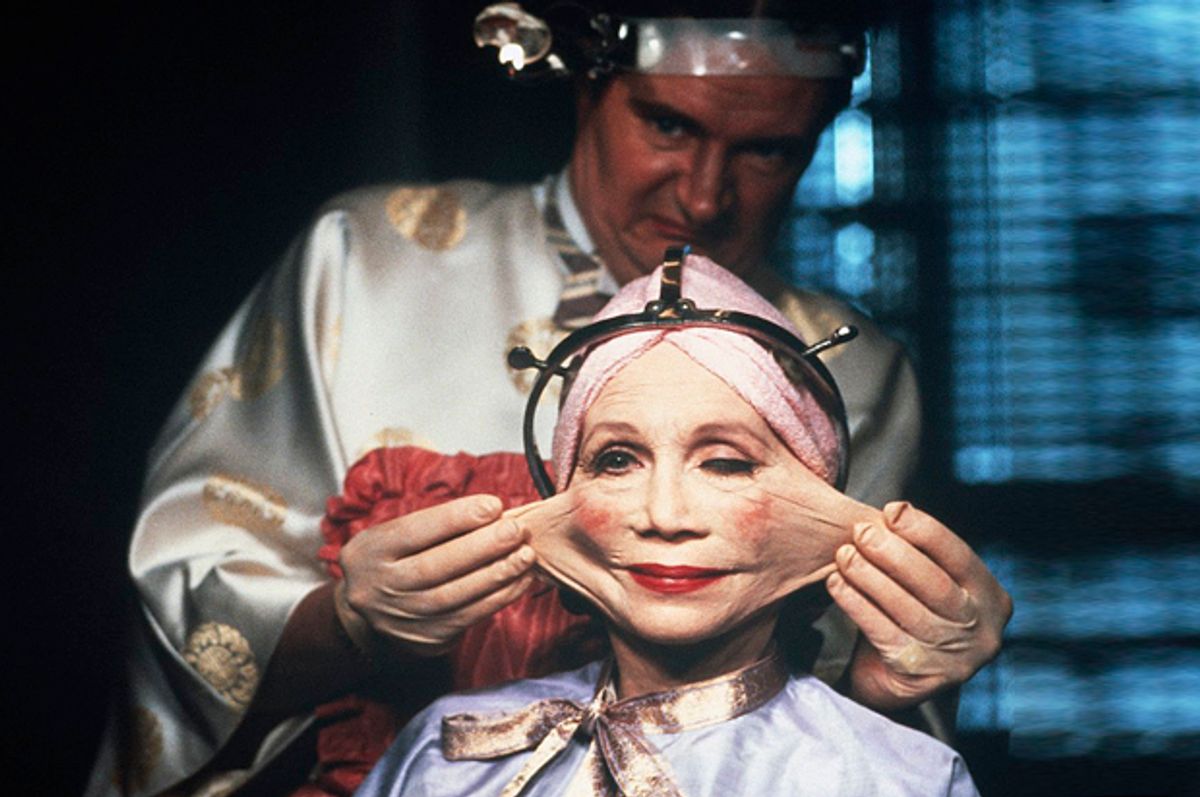 In the movie  "Brazil," the main character’s mother purchases repeated plastic surgery until she becomes something grotesque, a symbol of our vanity gone monstrous and absurd.

In the celebrity world, plastic surgery is alive and well, as is the criticism flung toward those who use it. Meg Ryan’s recent “new look” has garnered a vitriolic critique on social media. Having never been anyone whose face would was the subject of social media, I can only assume that there is intense pressure in Hollywood to appear youthful. It’s true that we have a culture that puts enormous pressure on women to look young, and to have bodies that curve in a specific way. And yet, our society judges us for giving in to that pressure.

In my younger days, I was vehemently against any kind of body alteration, feeling that it was giving into valuing the superficial. I had read Naomi Wolf’s "The Beauty Myth," and resented spending any money in the beauty industry. I stopped shaving my legs in protest, and rarely bought makeup However, I colored my hair, wore earrings in my pierced ears, and shoved contact lenses into my eyes. It was during this contradictory time that my mother got breast implants. My mother had been a flower child who hitchhiked across Europe, but that was years ago and she was in a different world now. One that involved a new husband, evenings out, and a new set of jugs. My siblings and I liked her new husband, Marv, although he was unlike anyone she’d dated before. For one thing, he had money. Something my mother had never had. And he had a terrible hairpiece, but we thought we could look past that.

My mother and I are both small breasted women, which has its challenges. Stylish shirts gap in the wrong places. Low cut sexy dresses hang loose. I have spent a fair amount of money on push up bras, “Miracle” bras, and inserts to shove into my bra to fill out certain styles. I don’t get to wear low cut shirts to show off my sexy cleavage, because isn’t any to show. This had bothered my mother her whole life. She took part of her savings, combined it with some of her husband’s money and bought herself implants.  My sisters and I figured she paid for one boob and Marv paid for the other.

I drove the four hours to stay with her and help her recuperate from the surgery while Marv was at work. She was sick, weak and in pain, her skin stretched mercilessly over her implants. I felt helpless trying to take her pain away, bringing her Jell-O, hot tea, a Percocet. I brought her icepacks which she held delicately over her swollen and disfigured chest. It was hard to imagine it looking normal, ever. At her follow up appointment with the surgeon, I glared at him with disgust. He didn’t wear a doctor’s coat, but a slick suit jacket. I loathed his tan skin. He reached his two hands out casually and forcefully adjusted my mother’s new breasts, causing her suck in her breath and stumble into me. On the way home I pulled over so she could vomit. I couldn’t figure out why she should do this to herself.

A few weeks after my mom’s surgery, my sisters and brother and I got together at my mom’s for the 4th of July.  My brother and I rolled our eyes at my mom’s low cut shirt and booty shorts.  When she and Marv walked out to the pool together he whispered, “Here come Rugs and Jugs." Mom gathered my sisters and I up and dragged us into the bathroom where she flung off her shirt to show us her new tatas.

“What do you think?” she asked while I ducked my head to avert my eyes from my mother’s giant breasts.

“Do you think one is larger than the other?” she asked anxiously.

“Geez, Mom” said one sister. “When you do something, you go all out."

I wasn’t interested in comparing sizes. I tried to make my way to the door, but it was too crowded to move in the bathroom. I glanced in the mirror and my mother’s breasts were looming.

“Don’t cremate me. My boobs will explode.”

“I think Marv’s boob is bigger,” announced a second sister.

Later that night, while we were drinking wine out by the patio, my sister asked me how I was doing. I was confused.

“I was just worried that you might be feeling insecure about your own body, since Mom got her new boobs. I mean . . .” she stumbled awkwardly and then smiled at me over her own ample rack. “You’re boobs are just fine on you. You know you don’t need to get anything bigger.”

“I’m good,” I said. “Mom is insane, you know that.”  Although for the first time, I did suddenly feel like my breasts had been insulted.

I mostly like the convenience of small breasts and when I need a push up bra, I just put one on. However, I do wax my eyebrows and upper lip, which hurts like hell and leaves my skin red and puffy for hours. I have spent precious time and money at the salon to color my hair. I don’t judge my mother as I once did, for changing her body. It’s been years since my mother’s implants.  She doesn’t regret them, although she did stop wearing booty shorts and crop tops, thank god. I may not have understood her decision, but at the core of the issue is that it’s my mother’s body. What she chooses to do with it is her prerogative. Although she does still feel that one boob is bigger than the other. I still haven’t looked that closely.

Although the drive to remain youthful in Hollywood is frequently blamed for actors’ choices for to go under the knife, Meg Ryan’s “new look” doesn’t appear to be about looking youthful. Her face, in my opinion, doesn’t look younger or appear as though she’s trying to look like she’s 25, it’s just different. It’s as if she’d gotten tired of long hair and given herself a shag cut. Regardless of the motivation, the question remains – why do we care? Do we care because we love the face of "Sleepless in Seattle" or "When Harry Met Sally"? Have we so absorbed these movies into our consciousness that we feel we own the actor in some way? Somehow, we feel that her face belongs to us in some way, and Ryan’s choice to alter it feels to us as though she’s taken something from us. When my mother bought herself some new breasts, it felt a little like the hippie mother who took me to Renaissance festivals and sold ceramics was gone. But my mother’s body belongs to me no more than Meg Ryan’s face. So, let’s pass on the judgment. Get the boobs. Rip out the hair. Botox the lips. Or don’t. Whatever. Frankly, we should all have more important things to think about.

Naomi Ulsted is a fiction and memoir writer from Portland, Oregon where she also directs an educational training program for at-risk youth.