The fight is far from over: Pro-choice advocates now must battle the mushrooming lies spread by media

2 goals for pro-choicers: Focus on changing TRAP laws and reorienting a biased media narrative on abortion 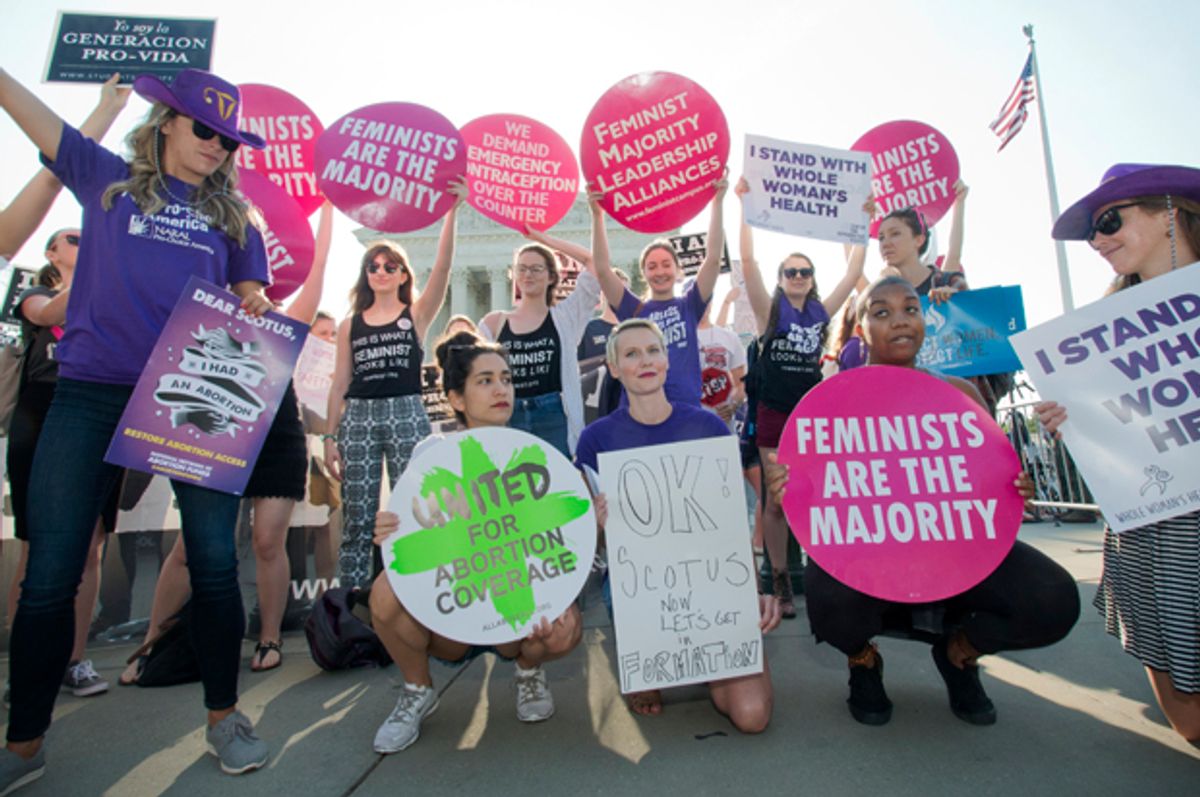 It’s been nearly two weeks now since pro-choice advocates celebrated a decisive victory in the Supreme Court, when the 5-3 decision in Whole Women’s Health vs. Hellerstedt struck down both provisions of Texas’s House Bill 2 (HB2), one of many TRAP (Targeted Regulation of Abortion Providers) laws that have swept the nation in the last five years. If left standing, HB2 would have closed the majority of abortion clinics in Texas, as it required abortion providers to have admitting privileges in a hospital no more than 30 miles away, and for abortions to only be performed in ambulatory surgical centers. Both of these requirements are not only

Both of these requirements are not only unnecessary for patient wellbeing, but also almost impossible for abortion providers to comply with, due to the expense of their implementation. And even worse, both provisions of the law were disguised as concerns for women’s health, but only served to advance an anti-abortion agenda. Pro-choice advocates rejoiced on June 27th because the Supreme Court recognized HB2’s false pretenses and put a stop to them, not just in this case, but in all similar cases to come.

In his opinion on behalf of the majority, Justice Stephen Breyer stated that, “neither of these provisions offers medical benefits sufficient to justify the burdens upon access that each imposes. Each places a substantial obstacle in the path of women seeking a previability abortion, each constitutes an undue burden on abortion access, and each violates the Federal Constitution.” Breyer’s words establish a precedent that any law that prevents abortion access under the guise of protecting women’s health is unconstitutional. Pro-choice advocates could not ask for a better outcome in this case, but what comes next? One thing is clear: the fight for reproductive rights for all women in America is far from over.

According to the Guttmacher Institute, there have been 107 TRAP laws passed in various states in 2016 alone and “from 2011 through 2015, states added, on average, 57 new [abortion] restrictions per year.” So HB2 is clearly one of many “undue burdens” on women’s reproductive rights. Justice Ruth Bader Ginsburg’s concurrent opinion in Whole Women’s Health vs. Hellerstedt attacked TRAP laws with her scathing dismissal of the proponents of HB2: “In truth, ‘complications from an abortion are both rare and rarely dangerous…Given those realities, it is beyond rational belief that HB 2 could genuinely protect the health of women, and certain that the law ‘would simply make it more difficult for them to obtain abortions.’”

Ginsburg makes it clear that HB2 was passed specifically to decrease abortion access, not to protect women’s health, as it claimed, and this combined with Justice Breyer’s assertion that HB2 did nothing to protect women’s health sets an important precedent that will affect other state’s regulations on abortion providers. Hopefully, this precedent will give those who are challenging many other TRAP laws, in many other states, the legal upper hand they need to strike them down.

It also finally changes the playing field: for the first time in decades, anti-abortion groups must play defense, as this case’s precedent throws dozens of similar state regulations on abortion into question. Since 1992’s Planned Parenthood of Southeastern Pennsylvania v. Casey ruling set the precedent that abortion restrictions are okay as long as they don’t impose an “undue burden” on abortion access, anti-abortion advocates have used that as a justification for ever-increasing and increasingly outrageous abortion regulations. Whole Women’s Health vs. Hellerstedt finally clarified the meaning of an “undue burden” upon abortion access, destroying the anti-abortion campaign’s argument in the process, and giving pro-choice advocates a clear advantage in similar court cases to come.

With that in mind, the precedent this case sets is obviously huge, and its implications are already being seen: in the two weeks that have passed since HB2 was struck down, Alabama’s Attorney General ended an appeal to enforce an admitting privileges law very similar to HB2; the Supreme Court denied Mississippi and Wisconsin’s appeals to restore their also very similar admitting privileges laws; the Center for Reproductive Rights filed a lawsuit challenging seven (again, also similar…see a pattern here?) abortion regulations in Louisiana; Planned Parenthood has launched a campaign to take on similar laws in Arizona, Florida, Michigan, Missouri, Pennsylvania, Tennessee and Virginia; and a particularly outrageous set of abortion restrictions that would have banned all abortions of fetus’s with a disability or genetic abnormality in Indiana were blocked, and other restrictions in Indiana, including an ultrasound requirement for all abortions, are being challenged. If we can accomplish all this in just two weeks, then the legal tide must be turning. But the fight to turn the tide of public opinion is still vital and ongoing, as long-ago debunked myths about abortion are still accepted by many as facts, and the Supreme Court’s decision in Whole Women’s Health vs. Hellerstedt won’t change that overnight. Why are there still so many people who think abortion providers sell fetal tissue or that birth control can cause an abortion?

Part of the reason for widespread misinformation about abortion can be blamed on its media coverage, that too often presents myths as facts. Since 2011, there has been an unprecedented attack on abortion access from numerous TRAP laws, and public outrage has been stymied by the mass outpouring of inaccurate information about abortions. The religious right’s campaign against abortion access has been unfairly supported by the mainstream news media, who are supposed to provide the public with factual, unbiased information, but instead, have been consistently providing us with just the opposite. A Media Matters study of evening and prime-time news (on Fox News, CNN, and MSBNC) over a 14 month time period found that due to the dominance of anti-abortion speakers on mainstream news broadcasts, there has been more inaccurate information spread about abortions than ever before.

For example, Media Matters found that 70% of appearances on Fox News (including hosts, guests, etc.) identified as anti-choice or made anti-choice statements; out of all appearances on MSNBC, Fox News, and CNN, 40% identified as anti-choice, 62% were male, and only 17% of all appearances on all three networks identified as pro-choice. Even more shocking is this finding: “705 statements containing inaccurate abortion-related information aired on Fox News,” whereas only 158 statements on Fox News contained accurate information. Essentially, the news coverage on abortion props up TRAP laws by spreading inaccurate information about abortion-related issues. How can we hope to remove the unfair stigma attached to abortion if the public isn’t even given the correct information?

You wouldn’t know it from the biased media coverage, but public opinion on abortion has changed significantly over the years. A recent Bloomberg Politics national poll that found that 67% of Americans agreed with a woman’s right to choose and with the 1973 Supreme Court decision in Roe v. Wade, and in a VOX/PerryUndem poll, 70% of respondents believed that more Americans identified as pro-choice than pro-life. But still, the mainstream news media is telling a different, inaccurate story. As we move forward, pro-choice advocates need to be mindful of this media bias and the problems it creates. 1 in 3 women have abortions, and the time has come to end the stigma of the procedure.

The only way to truly protect women’s reproductive health rights is to end abortion stigma by changing the popular narrative about abortion, and the only way to do that is to ensure that news outlets provide factual information to the public. Until the general public has consistent access to accurate information about abortion, then how can we truly have widespread access to abortion rights? The pro-choice movement should now focus its efforts not only on repealing TRAP laws in other states, as it has already begun to do, but also on changing the narrative about abortion, and that starts with holding the mainstream media accountable for their biased, inaccurate coverage.