A frightening precedent: Can we talk about the Dallas police using a bomb robot to kill a man? 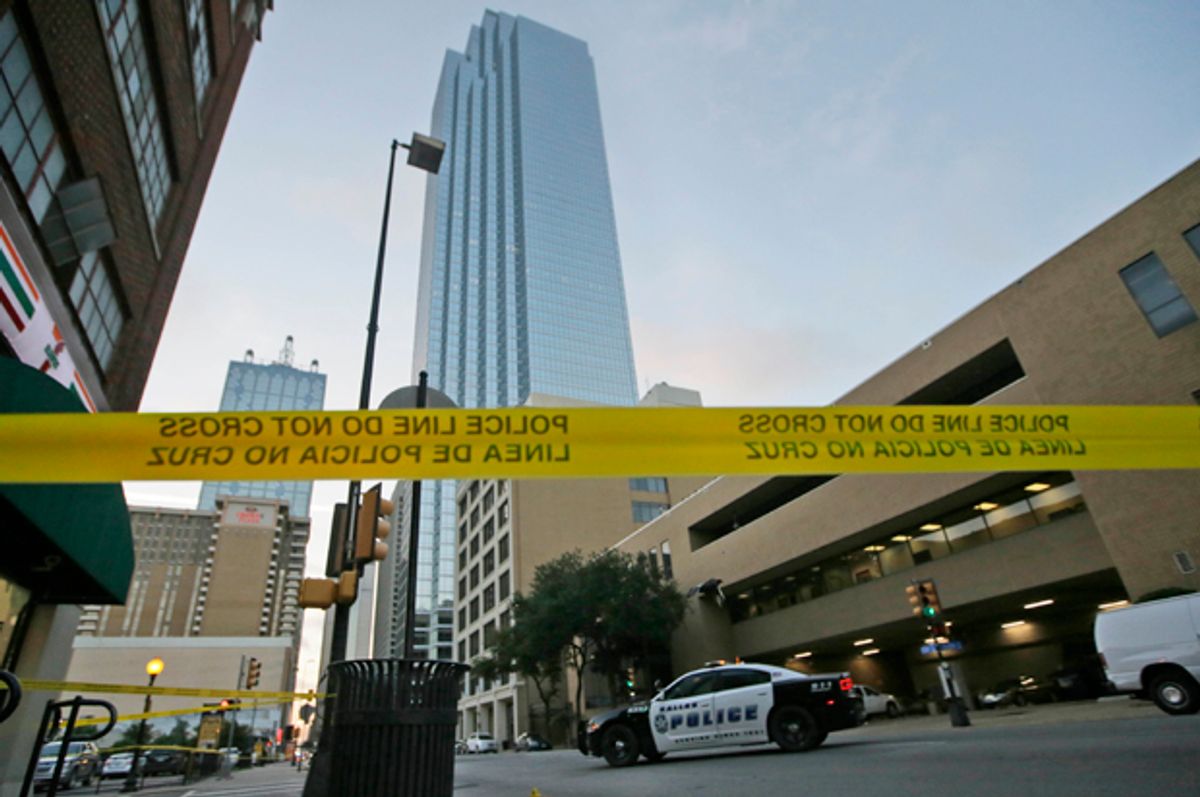 The police shootings in Dallas last week were disturbing for a number of reasons. Most obviously, five officers lost their lives. Whatever your thoughts on police brutality or racism in the criminal justice system, there's no justification for what happened. But last Thursday was also disturbing because of a dangerous precedent set by the Dallas Police Department. The lone gunman, Micah Xavier Johnson, was killed around 2:30 AM Friday morning after a protacted stand-off with the police. Trapped in the parking garage of a local college, Johnson negotiated for hours with the police, reportedly refusing to cooperate. Eventually, officers on the scene sent a robot into the garage and detonated an explosive device near the suspect, killing him instantly. “We saw no other option but to use our bomb robot,” said Dallas Police Chief David Brown. “Other options would have exposed our officers to grave danger.”

This was an extraordinary decision. It was the first time domestic police have used a lethal robot for the specific purpose of killing a suspect. As Seth Stoughton, a former cop and assistant professor of law at the University of South Carolina, told The Atlantic, “I'm not aware of officers using a remote-controlled device as a delivery mechanism for lethal force. This is sort of a new horizon for police technology. Robots have been around for a while, but using them to deliver lethal force raises some new issues.”

And those issues are fairly obvious. To begin with, this is a nation governed by laws, not men. And here an extra-judicial decision was made to kill a man. It's easy to overlook this given the circumstances and the crimes, but this has to been seen in terms of the precedent it sets. Johnson was a clear threat, but he was also pinned down. There's an enormous difference between killing a suspect while exchanging gunfire and methodically sending in a bot to execute him.

Johnson had a constitutional right to due process, no matter how despicable his crimes. If the police could have contained him or waited him out, we have to ask whether or not they had an obligation to do so. The use of deadly force absent the imminent threat of death is a violation of the constitution and the International Covenant on Civil and Political Rights, which the U.S. has ratified. The question thus becomes what constitutes an “imminent threat.” Here there is surely room for interpretation. But if Johnson was trapped in a garage and there were no civilians in the immediate area, that's a difficult case to make. It's not impossible, however.

Five officers had already been killed and several others were wounded. One can certainly argue an imminent threat existed, and as such the decision to use lethal force was justified, regardless of the method used. But the questions raised by this sort of technology remain. It's not unlike the debate surrounding the use of drones against terror suspects. In both cases, these tools make killing remarkably easy. They also minimize the risks of police and soldiers while separating the killers from the killed. There's both a spatial and moral distance here that makes it all the more urgent to discuss. When eliminating a suspect becomes risk-free, the temptations to act prematurely can be overwhelming. Which is precisely why this has to be thought through carefully. Technology has outpaced the law, and the events in Dallas are yet another reminder of this.

This incident also has to be viewed against the backdrop of police militarization in this country. Since the drug war exploded in the 1980s, police departments have assumed an increasingly militarized posture. Thanks to the “War on Terror” and the little-known National Defense Authorization Act, domestic police departments have used federal grants to procure surplus military equipment. (According to at least one report, that's how the Dallas PD acquired the robot used to kill Johnson). Drones, tanks, bomb-resisting robots, and anti-ambush military vehicles have landed in the laps of local police, who've found ways to use use these weapons of war. Images of tear gas and cops in combat garb toting military-grade weapons on American streets has become commonplace. And unsurprisingly, with the rise in paramilitary tactics and military-style raids, incidents of excessive force and police brutality have spiked.

All of this has reshaped the culture of law enforcement. A warrior ethos has replaced a commitment to public service. It's hard to overstate how dangerous that is. As Stoughton noted in his interview with The Atlantic, “The military has many missions, but at its core is about dominating and eliminating an enemy. Policing has a different mission: protecting the populace. That core mission, as difficult as it is to explain sometimes, includes protecting some people who do some bad things. It includes not using lethal force when it's possible to not.”

It's entirely possible (likely even) that the police did nothing wrong here. But we've clearly entered an ethical and legal gray area. Again, this isn't about Johnson so much as the precedent his killing sets. I've no interest in defending him personally. This is about his rights as an American citizen and by extension the rights of all citizens. Agents of the state decided to kill a suspect on the scene without a trial and at a distance when perhaps other options were available. It's easy to imagine a future scenario in which the threat is less clear and the decision more controversial. This is what we have to consider when discussing this issue.

A death-dealing robot is a weapon of war, not law enforcement. Placing it in the hands of cops and allowing them to determine on the spot when and how to use it is terrifying. It may be that the benefits of this technology exceed the risks, but that's a conversation we've yet to have as a country. And even if that is the case, the public deserves to know the protocols and the chain of command. What are the parameters surrounding the use of killer bots? Who decides when they're appropriate? If a teleoperated robot can be used to kill a suspect, can't it also be used to neutralize him non-lethally? How do you determine which level of force is necessary?

These are questions that have to be asked, and the answers ought to concern liberals as much as conservatives. Anyone worried about state-sanctioned tyranny has reason to demand clarity here. Once more, the issue isn't Micah Johnson. The issue is the erosion of due process and a nation in which domestic police are allowed to kill civilians remotely without judicial consent.

If there's a slippier slope, I've yet to see it.