There are right ways and wrong ways to treat sunburn, bug bites and poison ivy 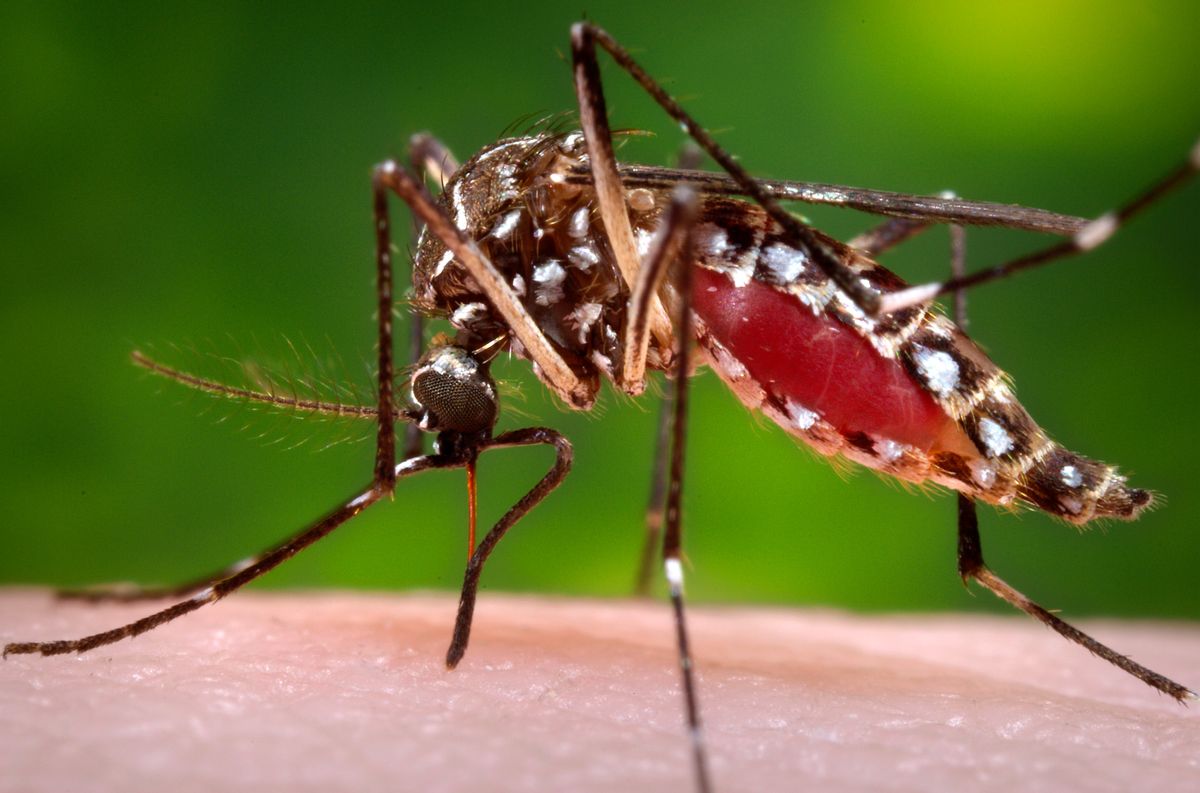 This 2006 photo provided by the Centers for Disease Control and Prevention shows a female Aedes aegypti mosquito in the process of acquiring a blood meal from a human host. On Friday, Feb. 26, 2015, the U.S. government said Zika infections have been confirmed in nine pregnant women in the United States. All got the virus overseas. Three babies have been born, one with a brain defect. (James Gathany/Centers for Disease Control and Prevention via AP)
--

Warm weather, barbecues and vacations — what’s not to like about summer? Nothing…well, almost nothing, anyway. There are a few summer miseries that dampen the spirits, resulting in desperate attempts to remedy them so as to continue your summer frolics. Beware, though. Don’t fall prey to bogus solutions to your seasonal dilemmas.

Here are three summer miseries, the bogus remedies for these common summer ills and the proven methods of treating them.

Nothing says summertime like lounging at the beach or lake, enjoying the warm breeze off the water, taking a dip to cool off, spiking the volleyball and soaking up the rays. And nothing says discomfort and inconvenience like slathering on greasy, sticky sunscreen to protect your skin against the harmful UV radiation of the sun. Maybe you’ll do it once before you head out, but more often than not, after a couple hours you’ve done a lot of sweating and swimming, and that first application of sunscreen isn’t nearly as protective. But reapplying often isn’t in the cards. One survey found that 55 percent of beachgoers suffered from sunburn even though they had applied sunscreen. Lack of re-application was one reason, but others included inadequate SPF (your sunscreen should always be SPF 30 or higher), not applying enough (you should apply at least one full ounce per application per adult, or about a cupped handful), or not fully covering all exposed areas (ears, necks and temples are often missed when applying sunscreen).

Neglecting sunscreen is no laughing matter. More than three million Americans suffer skin cancer every year, more than breast, prostate, lung and colon cancer combined, and the cost of treating these cases is over $8 billion a year. Over 75,000 of these skin cancers are of the melanoma type, which is deadly if not caught early (more than 10,000 will die from melanoma this year alone). Of these melanoma cases, 80 percent of them are directly caused by overexposure to the sun, i.e. sunburn. If you’ve had more than five sunburns in your life, you have roughly doubled your chances of getting melanoma. Conversely, if you regularly use sunscreen, you cut your chances of getting melanoma in half. The course of action seems obvious.

But you probably haven’t done the prudent thing. Not surprising. Only about 14 percent of American men and about 30 percent of American women regularly use sunscreen. How do you treat your sunburn? One of the most popular treatments for relief of sunburn is aloe vera. In the United States alone, aloe vera products account for more than $100 billion dollars. It’s in lotions, creams, shampoos, perfumes, soaps, food and countless other products. Aloe vera was first identified as a healing agent in 1935, and it was approved for treatment of burns and wounds in 1959, but there has actually been very little scientific testing to ascertain whether aloe actually does anything. Most of the stories about aloe’s effectiveness are entirely anecdotal. The journal Herbal Medicine: Biomolecular and Clinical Aspects reports that there is “a lack of consistent scientific evidence to support many of the therapeutic claims for aloe vera.” Similarly, the British Journal of General Practice stated in 1999 that “whether [aloe vera] promotes wound healing is unclear.” Then there is the question of whether the product you are spreading on your sore shoulders actually has any aloe in it. The Journal of AOAC International did a study of 18 aloe products in 1997. They found that nine of the 18 had very little of the active ingredient in aloe (acemannan polysaccaharide) that supposedly is responsible for aloe vera’s effectiveness.

Often the pain relief you experience from aloe is actually the result of other ingredients in the product, like lidocaine, a topical medication that numbs the skin and actually does bring temporary relief. The Skin Cancer Foundation has several recommendations for sunburn. First thing to do is to cool the skin for a short while with a cool shower, cold compresses or ice. While the skin is still damp, apply moisturizer (yes it can be aloe, but don’t assume the aloe is doing anything medicinal other than keeping moisture in), and continue to apply it for a few days. Take a non-steroidal anti-inflammatory medication like Advil, aspirin or naproxen for the discomfort and/or an over-the-counter cortisone cream, which can help reduce inflammation. Wear loose clothing to minimize irritation. Drink plenty of extra fluids, especially water and electrolyte drinks. See a doctor if you are blistering, feeling dizzy or having any signs of infection (like red streaks or oozing blisters).  And most of all, “learn from the burn.” Wear sunscreen.

Summertime invites relaxing with friends and family, often at a campground or backyard dinner party. The grilled hot dogs and burgers are delicious, the company enjoyable and the conversation lingers until dusk. And then the uninvited guests begin showing up. Mosquitos have been the scourge of the human race for as long as we’ve been intelligent enough to complain about them. Some varieties of the insect carry diseases that make us sick or even kill us. Fortunately, at least in the United States, they just make us irritably itchy. The red welts that keep us scratching are actually an allergic reaction to the saliva of the female mosquito (the males don’t bite) left behind as it punctures our skin and sucks our blood. Seeking protection from the itchy bites has generated a multi-billion dollar mosquito repellent industry.

Among these repellents are a large number of pretenders. Although they claim to protect you from the insect pests, scientific testing indicates otherwise. We do know that the chemical DEET is a highly effective mosquito repellent. Although it has had a bad reputation as being dangerous to human health (mainly causing neurological complications), recent studies have shown that DEET is actually very safe to use. But because of its erroneous safety reputation, many look for so-called “natural” repellents instead of DEET. Test after test has shown that most of the natural repellents are far inferior to DEET. These would include citronella, peppermint oil, lavender oil, Melleuca oil and clove oil. While some of these have some limited effectiveness, they work for minutes, not hours, and have to be reapplied constantly to afford useful protection. One botanical oil, lemon eucalyptus, has been shown to work reasonably well.

Another popular but bogus mosquito repellent is the mosquito coil. Although it contains an insecticide called allethrin, it is actually the smoke from the coil that confuses and repels the mosquito. Even so, it has a limited range (just a few feet), and more worrisome, some studies have indicated that one coil releases as much particulates into the air as 100 cigarettes. Talk about secondhand smoke. Clip-on repellents have become popular in the last few years, but despite claims of up to 11 hours of protection, tests show only about two hours worth. Bug zappers? Forget it. They kill thousands of insects, but not many mosquitos. In fact less than 1 percent of the bugs killed by zappers are biting insects. Garlic? Vitamin B12? Nope. Reliable scientific tests have shown they don’t work to protect you from the bloodsuckers. Plant insect repelling geraniums? Again, no — they're about as effective as planting nothing.

For real protection against biting insects, you really have two effective choices. Either a repellent using DEET (10-30 percent) or picardin (another popular product, almost as effective as DEET, with the added bonus of not being oily). For a “natural” repellent, stick to lemon eucalyptus oil. In all cases, don’t just spray it on your clothes or “spot” spray only certain areas. Apply the repellent as you would sunscreen — on all parts of your skin that are exposed.

Undoubtedly you have heard the old warning, “Leaves of three, let it be.” We are talking, of course, about poison ivy, the enemy of the summer hiker and gardener, not to mention child summer campers everywhere. The widespread and hard-to-eradicate plant (along with its cousins, poison oak and poison sumac) causes a persistent and itchy rash that often takes days or even weeks to go away. Despite the longstanding myth, poison ivy rashes are not contagious. They are an allergic reaction to the oil in the plant (urushiol). Eighty-five percent of people are allergic to poison ivy, according to the American Academy of Dermatology. If the oil is on your body or clothing and you brush against someone else, they may be susceptible to the rash, but it is because you have spread the oil, not because touching the rash causes a rash. The rash also does not spread. The reaction is confined to where the oil has touched. Because the rash often does not appear for 12 to 72 hours after contact with the plant, it may appear to spread, but that is only due to the fact that your body may have touched the plant at different times.

Google “poison ivy treatments” and you are apt to get any number of remedies, from apple cider vinegar to banana peels to cucumbers to aloe vera to watermelon rind. While some of these remedies may afford temporary relief from the itching, none of them will cure the rash. The best defense against the plant is awareness. Know what the plant looks like and avoid it. When hiking, gardening or being in less manicured nature surroundings, wear long sleeve shirts and pants, as well as closed-toe shoes (and gloves for gardening). For the extra-diligent, there are over-the-counter creams, like Ivy Block, that you can apply before your activity. When you are done with your activity, remove your clothes and wash them thoroughly (urushiol can last for years if not washed off). Wash your hands and any exposed skin with soap and cool water.

For the unfortunate that have developed a rash, cool baths, calamine lotion and cortisone creams can help soothe the itch. Because the rash is an allergic reaction, antihistamines like Benadryl and Claritin can also work to lessen the persistent itching, as well as redness and swelling. For widespread rashes that might include the face and genitals, see a doctor — they may administer a steroid, which can ease the symptoms. Avoid scratching the rash blisters, as that may cause an infection.