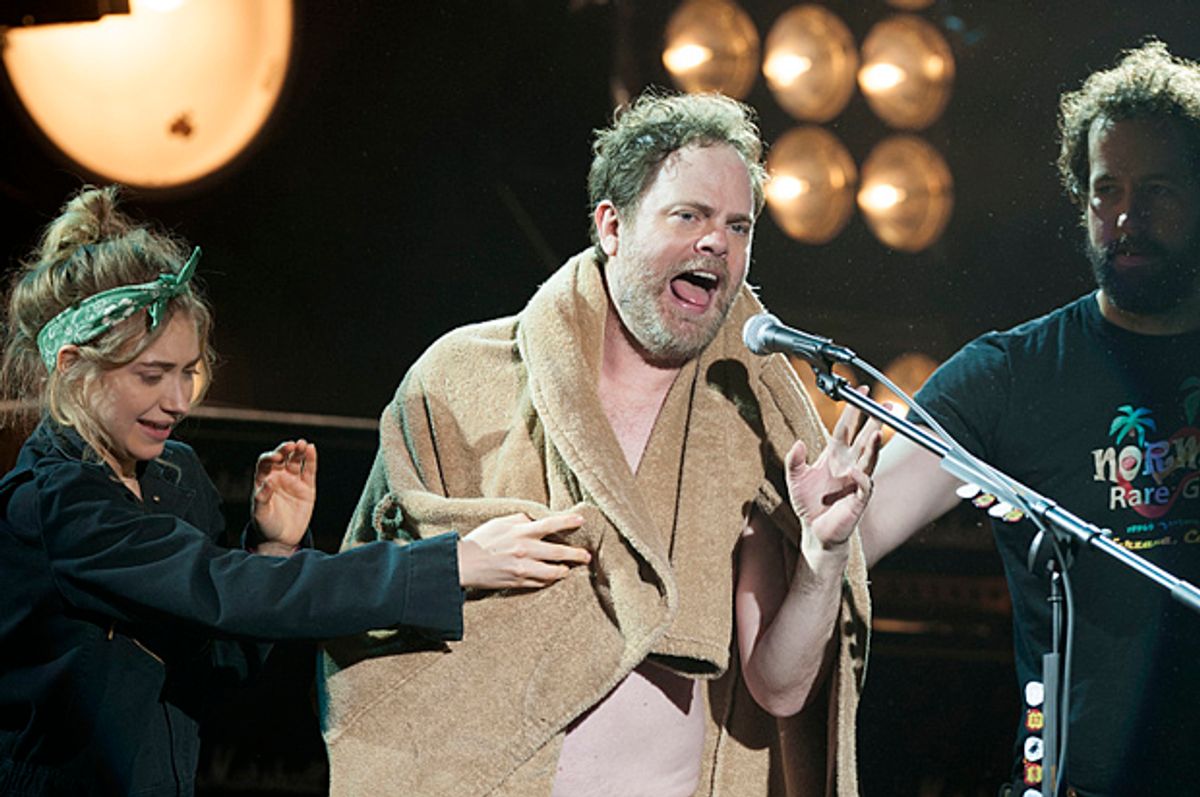 “Roadies,” Cameron Crowe’s Showtime series about the behind-the-scenes folks who make arena-rock shows happen, has gotten mixed reviews. But it still retains some lingering good will, in part for the warm feelings music fans have for their favorite bands, the sense that the crew behind the concerts are unsung heroes, and because Crowe has made some very good movies about music, including the wistful “Almost Famous.”

At the very least, he’s sincere (sometimes too much so), and so it’s absolutely no fun to gang up on him. And Rainn Wilson is one of the funniest actors of our time. There was a lot of reason to think that his appearance as an arrogant, sniveling blogger trying to take down the band these roadies support on the show’s third episode would have been the one to make clear the show’s potential and purpose. At the very least, it could have been good fun.

But somehow, the episode. “The Bryce Newman Letter,” is the show’s worst installment so far. And it suggests that after three episodes, the series can’t figure out what it wants to be or how to get there.

A number of other things happen in the episode, including an attempt by Kelly Ann (Imogen Poots) to become more likable, and a failed attempt by Bill (Luke Wilson) to make a strong connection with one of his girlfriends.

But the blogger character is the center of the episode, and it shows where “Roadies” is really getting lost. For what it’s worth, I’m only occasionally a critic, and I have no love for writers who thrill at savaging a band or film or whatever. But the episode’s portrayal of Bryce Newman is so wrong it makes me wonder if Crowe, who wrote and directed the episode, has lost his touch completely.

Even for television — which depends, of course, on heightened reality and some exaggeration to make characters stand out — Newman is a cartoon. Some of the characters in “Roadies” are a little flat, but this evil blogger seems to have arrived from another show altogether. If Rainn Wilson made a brief, wacky walk-on role to offer comic relief it would be one thing. But here, he’s a major character who drives just about all of the action, and he’s so unbelievably unlikable and unpleasant he would be out of place in just about anything. It's just sort of goofy.

Also puzzling is the way the character fits into Crowe’s own background. Crowe started his career as a music journalist, and one of the best scenes in “Almost Famous” features Philip Seymour Hoffman portraying legendary rock critic Lester Bangs. The movie’s protagonist is a young journalist based on Crowe himself, who wrote for Rolling Stone for years. So it may be that Rainn Wilson’s Evil Blogger character is not the standard Critics Are Killjoys trope, but something newer: a dissing of the new wave of pseudo-critics who have come into the field in the days of the web, a kind of Boomer nostalgia for the days of print.

Even as a non-Boomer, I kinda like the sound of that. But if so, it makes even less sense: Whatever the many faults of the Internet, it has hardly monopolized critical opinion around one or two dominant figures. Sure, a lot of people read Pitchfork, but is there any writer there, or anywhere, who could shut down an arena-rock tour? Does any independent blogger stir fear in the hearts of a road crew? Unless it’s meant to be a joke, the premise is just bizarre.

The major off note is the way this evil blogger is treated: Invited to the show and then drugged, he’s dragged into a sexual encounter with a groupie and then, still stoned, humiliates himself onstage. By the end, he’s seen the light and loves the band. Variety’s Maureen Ryan describes the show as treating “the drugging and sexual assault of a human being as a funny prank. To make matters worse, it then depicts the character in question as grateful for the assault.”

Given that the one thing “Roadies” consistently does well is convey a decent and idealistic tone, why turn nasty like this? Even the dull corporate tool who arrives from management to lay off staff isn’t treated this way. The Rainn Wilson bit seems so out of character for Crowe; it’s as baffling as it is offensive.

And do you want to hear something strange? As disappointing as “Roadies” has been so far, and as awful as episode three is, I’m looking forward to the next one. I’m not sure how many of us are left, but I keep praying – for at least a little longer — that Crowe and company gets this right. When it comes to rock music, a lot of us still want to believe.