Salon's two cents: Why Gov. Mike Pence will be tapped as VP by Donald Trump 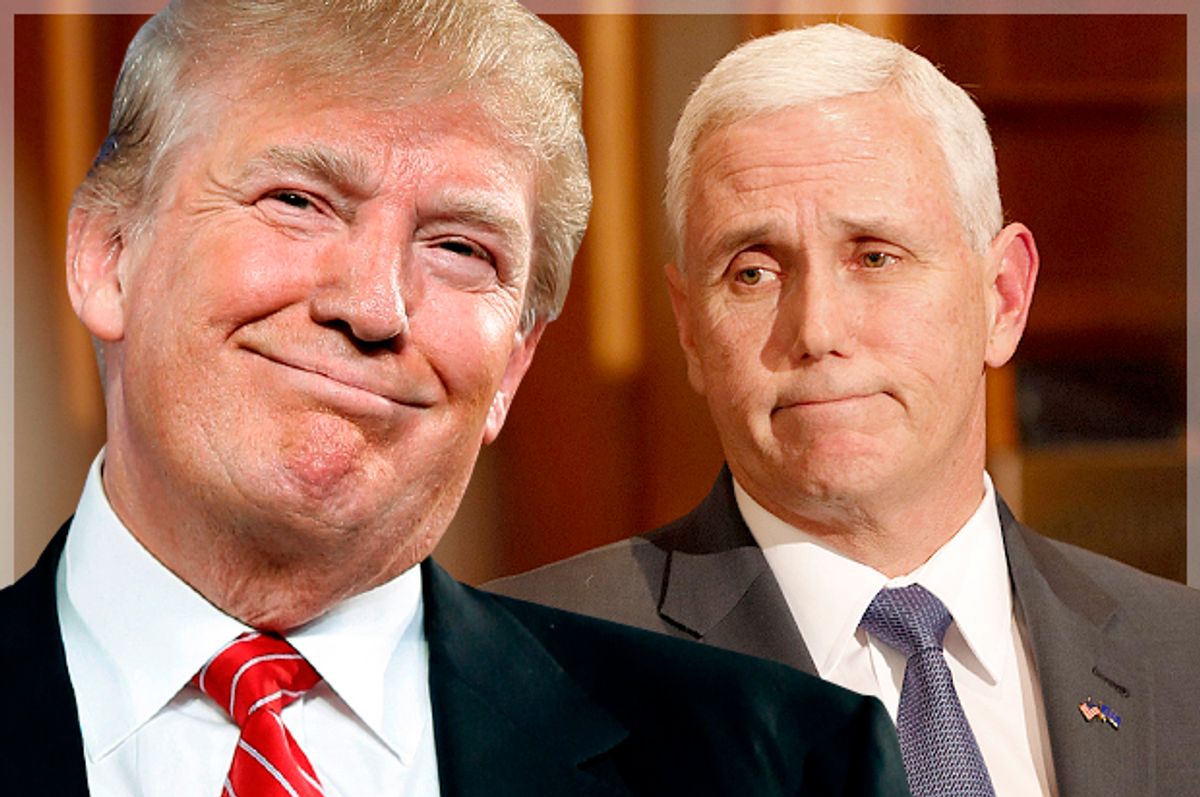 Mark it down — sometime this week Donald Trump will be announcing that Indiana Gov. Mike Pence will be his running mate.

Ever since Trump won the Indiana primary back in May — thus becoming the presumptive Republican nominee — Pence, the controversial and steadfastly conservative governor of the state, hasn't made that much buzz in the VP rumor mill.

Now, a week ahead of the Republican National Convention in Cleveland, multiple signs point to a Trump-Pence ticket, which as CNBC reporter John Harwood points out, would continue a longstanding GOP tradition:

But before we lay out the evidence for a Pence pick, let's take a look at some of Trump's other top prospects.

Trump has seen a number of potential running mates publicly back out of consideration. Tennessee Sen. Bob Corker, a onetime top prospect, dropped out after campaigning with Trump in North Carolina last week. Freshman Iowa Sen. Joni Ernst, meanwhile, told The Washington Post she'd rather focus on the Senate after meeting with Trump on July 4. But several others appear to still be openly campaigning for the position.

Being saddled with scandal and awful polls numbers in his own state rules out the New Jersey governor.

Despite suffering humiliating rebukes from Trump and widespread backlash after endorsing the billionaire in his famously bizarre appearance at Trump's Mar-a-Lago resort in March, Chris Christie has remained loyal to Trump. Politico

Politico noted that "has become the presumptive Republican nominee’s chief apologist, bucking other Republicans by refusing to call his remarks about Judge Gonzalo Curiel racist."

Trump said on Monday that Christie remains in his list of top five potential running mates, citing a need for a pick that has "great chemistry with me." His executive experience in New Jersey, however, is unlikely to help with what Trump signaled is his No. 1 priority when considering his No. 2: experience with Congress. Additionally, Christie on the ticket could ironically give Clinton an edge in New Jersey;  The "Bridgegate" governor's approval in the state has plummeted to 26 percent. More from Politico:

Then there’s the upcoming trial of a former aide and former appointee charged with closing off access lanes to the busiest bridge in the country. It's due to start in September, not only putting Christie’s biggest scandal back in the spotlight but also potentially churning up new and damaging revelations about the way the Christie administration operated — and all during the campaign homestretch.

Last week's hot pick, Trump vowed that the former house speaker would be involved in his administration "in one form or another" at an Ohio rally Gingrich attended. But Gingrich's stock dropped after Trump told the Washington Post Monday that "I don’t need two anti-establishment people" on the ticket.

A Republican who's pro-abortion rights on the ticket? There's no way that's happening in 2016.

"I have such great respect for the general, but believe it or not that will be one of my strong suits," Trump told The Washington Post after Flynn appeared on ABC's "This Week" and garbled his answer on abortion.

An outspoken critic of President Obama's Middle East strategy, Flynn has shot to the top of the pack in recent days. It it appears, though Trump  was quick to tamp down the speculation suggesting angry conservatives should deal with having a pro-choicer on the GOP ticket.

Despite Flynn scrambling to "clarify" his remarks to Fox News on Monday, Trump had already called the Washington Post's Chris Cillizza to emphasize that he values the "political" in a vice presidential pick over military experience.

"I was against the war in Iraq from the start," Trump has repeatedly — and dishonestly — claimed, suggesting he needs no assistance in with foreign policy decisions.

Which brings us to Pence.

It has been breathlessly reported that there is a 95 percent chance that Trump will name Pence as his running mate. Granted, that astronomically high probability comes from an Indiana delegate to the Republican convention who told The Washington Times that the speaker of the Indiana House had sought counsel on running for governor, because he'd heard Pence was not seeking reelection.

James Bopp, who places Pence's chances as nearly certain, may be on to something. Pence, who met with Trump last weekend, confirmed this morning that he will join Trump for a rally in the Hoosier State on Tuesday.

According to betting market PredictIT, Pence is the clear favorite for Trump, with a 55% chance. (Last week, markets had Gingrich in the No. 1 spot.) Although Pence told reporters that he hasn't spoken to Trump directly since they met last week at one of Trump's golf courses in New Jersey, spending related to his re-election campaign is suddenly on hold and his office has confirmed the red state governor is being vetted by the Trump campaign. Pence is in a tough re-election battle and faces a Friday deadline to appear on the state November ballot as either a gubernatorial or vice presidential candidate,

Pence is in a tough re-election battle and faces a Friday deadline to appear on the state November ballot as either a gubernatorial or vice presidential candidate, according to Fox News.

Pence, who has called himself  "a Christian, a conservative, and a Republican, in that order," is nationally most known for signing a controversial 2015 religious freedom bill, before quickly backtracking.  But he brings to the Trump campaign both state and federal experience. Pence served in the House from 2001 to 2013, including a stint as chairman of the House Republican Conference.

He’d be a rudder on a somewhat erratic campaign and he would have the right balance of being a full-spectrum conservative, having executive experience and legislative experience. He’s one of the best choices I’ve heard mentioned.

Pence “has got a lot of support among senior aides,” former top Trump adviser Michael Caputo recently told Politico. "I think Mike Pence already voted with his feet by going to visit with Mr. Trump,” he said

Republican Rep. John Carter told The Hill he would be "dancing in the aisles" of Congress if Pence were Trump's VP pick.

But, despite how happy Pence is likely to make conservatives, neither he nor any other VP will pull the spotlight away from the former reality TV star.

"History has said nobody ever helps," Trump told the Post, citing Lyndon Johnson's pick by John F. Kennedy as the last vice presidential selection that made a difference. "I've never seen anybody that’s helped."