The Iraq lies still matter: Bush's deceit and the seething distrust Americans have in their leaders

If you want to know why so many people believe that their leaders are liars, look no further than George W. Bush 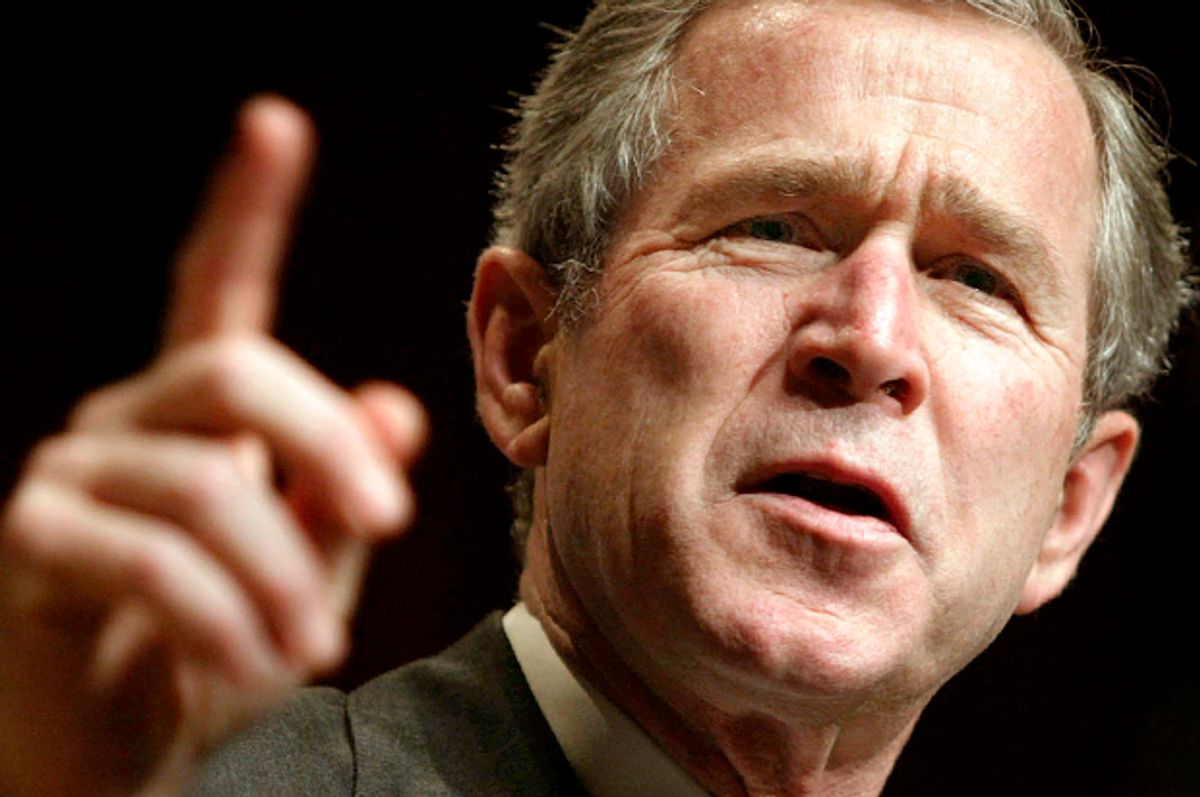 One of the more alarming characteristics of this election season is the fact that both major candidates for president are considered to be dishonest and untrustworthy by a majority of Americans. Of course when you compare it to the 16% approval rate American people give congress, both Trump and Clinton have the reputations of angels. The public generally holds all politicians in contempt, a trend that has been growing for quite some time and for a variety of reasons.

You can go back to the presidencies of Richard Nixon and Watergate to see where it began in the modern era. Ronald Reagan had Iran-Contra. George H. W. Bush had the Christmas pardons of half the Reagan cabinet. Bill Clinton was dogged by scandals throughout his term but was caught lying red-handed about a personal indiscretion and got impeached for it. But nothing can compare to the lethal dishonesty of President George W. Bush.

It was so obvious that it's rather shocking anyone would deny it. And yet the long-awaited Chilcot Report from the UK which reveals that intelligence officials knew that the invasion would cause Iraq to collapse and inevitably grow the environment for terrorism to flourish, for some reason is seen as a vindication of sorts for George W. Bush and Tony Blair by people who insist the two did not lie to the people to justify the war.

But they did, repeatedly.

Dylan Matthews at Vox helpfully laid out some of the lies, based upon David Corn's reporting for Mother Jones.  He begins with President Bush's insistence before the war began that Saddam Hussein had a massive stockpile of biological weapons. However, we know that the CIA told the White House that they "no specific information on the types or quantities of weapons agent or stockpiles at Baghdad's disposal." This was evidently something out of Bush's fever dreams.  But it was important.

As much as people were frightened of the prospect of Saddam having nuclear weapons (which Bush also lied about when he said we didn't know if he had one --- we knew that he didn't) they were also terrified about the prospect of biological or chemical weapons being used in another terrorist attack. After all, we had just been through the anthrax scare and President Bush was stoking these fears in press conferences where he warned people to be particularly aware of crop dusters and said that Saddam had a fleet of drone planes that could be used to drop bioweapons on Americans. (The Air Force said at the time that this was nonsense.)

All of this was done with the implicit suggestion that Saddam was working with Osama bin Laden, the mastermind who had proven he was willing to stage a catastrophic terrorist attack on American soil. That was the big lie that undergirded all the rest. And it was very effective. In September of 2003, six months after the invasion, a large majority of Americans believed it:

Nearly seven in 10 Americans believe it is likely that ousted Iraqi leader Saddam Hussein was personally involved in the Sept. 11 attacks, says a poll out almost two years after the terrorists' strike against this country.

Sixty-nine percent in a Washington Post poll published Saturday said they believe it is likely the Iraqi leader was personally involved in the attacks carried out by al-Qaeda. A majority of Democrats, Republicans and independents believe it's likely Saddam was involved.

The belief in the connection persists even though there has been no proof of a link between the two.

Matthews at Vox points out:

On numerous occasions, Dick Cheney cited a report that 9/11 conspirator Mohammed Atta had met in Prague with an Iraqi intelligence officer. He said this after the CIA and FBI concluded that this meeting never took place.

More generally on the question of Iraq and al-Qaeda, on September 18, 2001, Rice received a memo summarizing intelligence on the relationship, which concluded there was little evidence of links. Nonetheless Bush continued to claim that Hussein was "a threat because he’s dealing with al-Qaeda" more than a year later.

There were many large and small lies for months on end. My personal favorite is a small one but it's the one that best illustrates the "you can believe me or you can believe your lyin' eyes" tactic. In July of 2003, President Bush said this:

“[W]e gave [Saddam Hussein] a chance to allow the inspectors in, and he wouldn’t let them in. And, therefore, after a reasonable request, we decided to remove him from power….”

This is completely wrong. Hussein did let U.N. weapons inspectors in, and they  failed to find any weapons. The administration withdrew them so they could begin the invasion.

Here he is saying it

It was shocking to hear him say it. By this time it was becoming clear that the administration's stated reason for the invasion — to "disarm Saddam Hussein" — was turning up no WMD. And yet this blatant lie was barely noticed in the press. Here's how the Washington Post's  Dana Milbank explained why this wasn't a bigger deal:

“It was on the front page of The Washington Post, but I think what people basically decided was this is just the president being the president. Occasionally he plays the wrong track and something comes out quite wrong. He is under a great deal of pressure.”

How to explain that it "came out wrong" again three years later when the world was finally realizing just how thoroughly they'd been taken for fools when he said it again:

If you want to know why so many people believe that their leaders are liars, look no further than the fact that the George W. Bush administration convinced the nation that Saddam Hussein was in cahoots with Osama bin Laden and had weapons of mass destruction which the two evil-doers were planning to use against Americans. A quarter of million people (and counting) died as a result of those those lies. It's amazing there's any trust in government at all after that.