"The Night Of" recap: Down the rabbit hole

HBO's compelling new drama's debut introduces a victim, a detective, the suspect and his lawyer 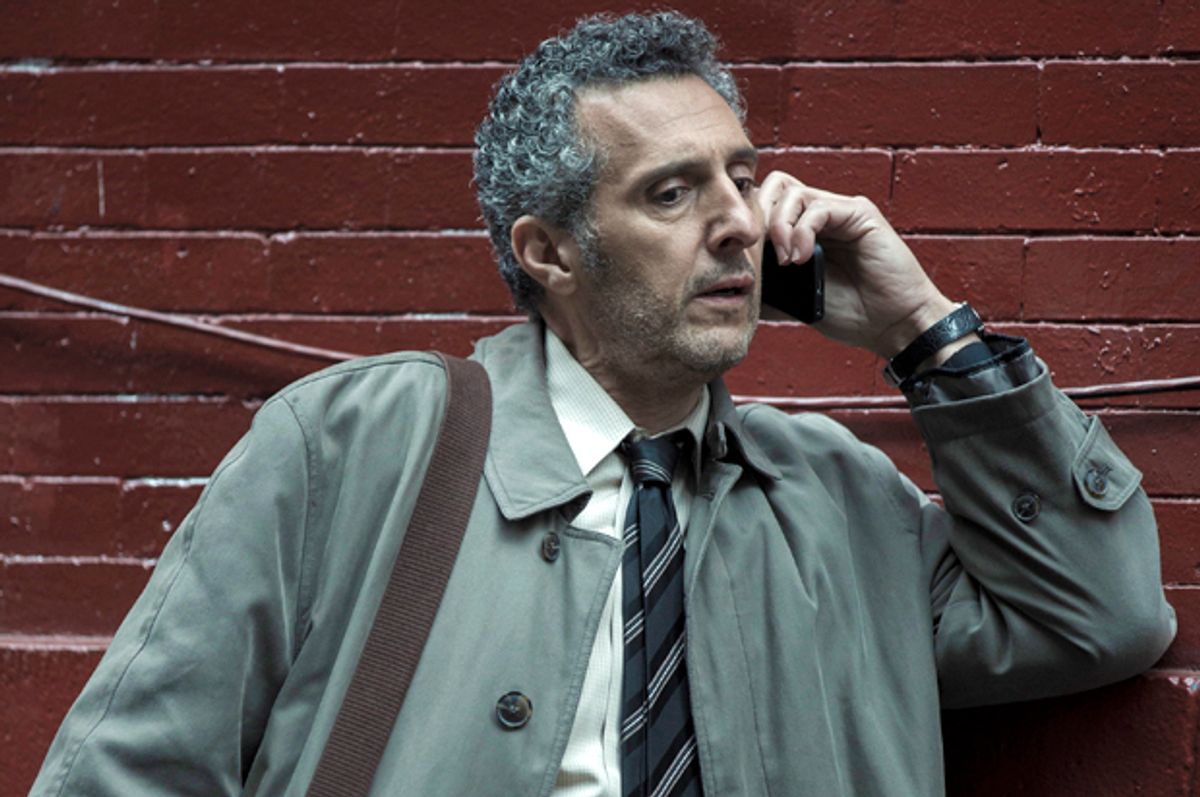 The following recap includes plot details from the premiere of "The Night Of."

The opening credits of "The Night Of" are a surrealistically dreary pastiche of images — an ecstasy pill; a bloodied hand, the black-polished fingers bearing cheap silver rings; a lone cab parked under a bridge — that will bear great significance throughout the course of the new HBO limited series. As each image rises and recedes, ghost-white against a grainy black, I’m reminded of the nightmare splendor of the opening credits for "True Detective," HBO’s last foray into crime drama, an attempt at a franchise that ultimately succumbed to its own pretentiousness. In episode one, titled “The Beach,” "The Night Of" establishes itself as decidedly uninterested in grandiloquent passages about time as a flat circle or bizarre dream sequences that seem like they missed their left turn into Twin Peaks; it is a workman-like whodunit (or, more apt, a did-he-really-do-it?) and a somber meditation on the hellishness of the slow-grinding bureaucracy of the criminal justice system. Its focus on character, along with the show’s pedigree (it counts the celebrated crime novelist and contributor to "The Wire," Richard Price, and the late James Gandolfini, among its executive producers), makes it a particularly well-constructed and beautifully varnished piece of workmanship.

From the introduction of our central character, Nasir “Naz” Khan (Riz Ahmed), a Pakistani-American college student from a good family, we know that the show will mostly shade fresh nuance into familiar story beats: Naz is a good-natured naïf of a kid, the kind of guy who tutors the basketball team and wishes that he had the height and the talent to take the court — or to talk to girls (when he hears one player mention an ex-fiancé, Naz exclaims, in utter awe, that “he has game.”). His immigrant parents, Salim and Safar (played by Peyman Moaadi and Poorna Jagannathan), often fall off the fine line between insulating their children from a cruel, capricious world, and smothering them. Naz is so desperate to get to “a team party” that he commits the quintessentially teenage transgression that will, before the episode’s end, find him calling home from the grimy smallness of a jail cell — he steals his father’s cab. Only he doesn’t know how to shut down the cab’s “off duty” light (of course he doesn’t), and soon, a slinky, Goth-lite femme fatale (whose name, Andrea, we will only discover after her death) finds her way into his back seat, insisting that she wants to see “the beach” (they settle for an impromptu conversation by a river instead).

This particular scene, and the sequence of scenes that come after it—flirtation and seduction, tasting the forbidden fruits of illicit substances, and the rough and risqué sex (she has a predilection for knife play) that seems like it will be an oh-my-God-you-will-not-believe-this-shit story for the guys in the locker room until it ends with the early morning discovery of her sliced-up corpse in the blood-sopped sheets — have the potential to seem rather rote, a casual doomsday instantly recognizable to anyone with a passing familiarity with the crime genre. However, the show invests them with a freshness that comes mostly from the performances — and from the way that certain small details accumulate, their repetition creating a palpable dread.

Riz Ahmed has a coltish handsomeness that serves as an appealing, and highly mutable, palette: Naz is wholly believable — and, more importantly, remarkably sympathetic — as he careens from nebbish to boy-gone-wild to the poor, hapless mope who builds the case against himself through one stupid, impulsive action after the next. Upon waking and discovering his momentary paramour dead, he flees the house, then breaks back into the house where he grabs the bloodied knife and puts it in his jacket pocket, where it is eventually discovered by the beat cop who pulls him over for making an overwide left turn.

For fans of "The Wire" or its predecessor and spiritual kinsman, "Homicide: Life on the Street," watching the police procedural portion of this episode is like slipping on a well-worn pair of boots: comfortable and able to carry you quite far. As Detective Box, the lead homicide investigator, Bill Camp possesses the kind of rumpled cunning that has allowed many a perp to feel safe, that maybe this cop isn’t like the others, and he’ll be genuinely unburdened if he just opens up, just a little—but when we’ve seen Jimmy McNulty or Meldrick Lewis play master interrogator and father confessor, we’ve always been squarely in the lawman’s perspective. "The Night Of" treats these scenes as a volley between Box and Naz—allowing Camp to imbue his gumshoe with a potent sense of menace. He wants his man and he wants to go home. And in truth, given the overwhelming evidence against Naz, one can hardly blame him.

Still, the tension between Box’s grim professionalism and Naz’s deepening desperation give these moments a genuine pathos, particularly when Box matter-of-factly tells Naz (who has been stripped down, his clothes taken into evidence) that he’ll need to undergo “a penile swab;” Naz’s voice is barely a quiver as he asks if this will hurt, and though Box’s tone retains that directness when he says it won’t, his eyes soften a bit, as if he’s surprised that someone he suspects of such savagery can really be just a kid—and, moreover, that he’s surprised by his surprise.

Box’s counterpart in the law and order sections of the episode is defense attorney Jack Stone, a low-rent, sandal-clad Galahad (he has severe eczema on his feet) played by John Turturro as a huckster with a heart of gold. Stone first spots Naz sitting alone, disconsolate in his cell, while he’s finishing up business with other clients; he walks out, about to make it any other day, business as usual—until he’s struck by something about the boy, that doe-eyed guilelessness or genuine aura of misery radiating off of him, perhaps. Stone’s decision to literally turn around, walk back into the jail, and declare that Naz is his client could’ve felt like a bald plot contrivance, but it’s given plausibility by Turturro, who balances Stone’s good-heartedness with an oily pragmatism. He immediately asks Naz to prove his fundamental Americanness by reciting the names of baseball players and avowing love of country—even if he doesn’t like it, Stone knows what he’ll really have to prove (beyond a shadow of a doubt) to save his client.

Stone provides some of the few moments of levity in an episode steeped in quiet terror. Director Steven Zaillian, who also co-wrote the episode with Price, holds the instruments of surveillance—a quick-stop security camera, a dashboard scanner, the cameras in the police station’s interview room—in the kind of intense close-up usually reserved for human actors; here, we see the case being built against Naz. The case is either solidified or complicated, depending upon where you stand on Naz’s possible guilt, by two eyewitnesses, one, an older gentleman who sees Naz fleeing the scene from his window; and the other, a brasher, more flippant sort (played by J.D. Williams, better known as Brodie Broadus, one of the most poignant, knuckleheaded characters on "The Wire") who sees Naz and Andrea together moments before they slip into her brownstone, and who cringingly tells Box that Naz is “one of those Arab dudes who looks Puerto Rican,” a line that not only showcases the character’s casual racism (and makes you question his motives for so readily stepping forward) but also highlights that even something that should seem unimpeachably objective — a man and a woman, walking together — can be seen through a decidedly subjective lens.

This issue of subjectivity is central, of course, to the central question of the show: whether Naz really did kill Andrea. The searing vulnerability in Ahmed’s performance makes us want to believe in Naz’s innocence, and his reckless impulsivity after he discovers his lover’s corpse would seem to vindicate that reading. After all, what cold-blooded killer wouldn’t at least wash the blood off his hands? But just when we think that "The Night Of" is poised to be one unlucky young man’s headlong tumble down the rabbit hole hellscape of the criminal justice system, another interpretation emerges. As this first episode comes to an end, Naz’s parents, Salim and Safar, finally get that phone call from the jail; Salim dashes outside, still barefoot and in his pajamas, and stares in silent shock at the spot where his cab was parked just hours before. Then we remember that his good kid, the kid that the staff sergeant calls “Bambi” did actually steal that car, and, in a drug-fueled revelry, did accidentally stab his lover’s hand during a game of “five-fingered Freddy,” and then laugh at it, as she did, both of them too glossed and primed with chemicals to feel anything. Anything is possible.