Sulu, "Star Trek" and queer sci-fi: LGBT diversity has been there all along—now it's gone mainstream 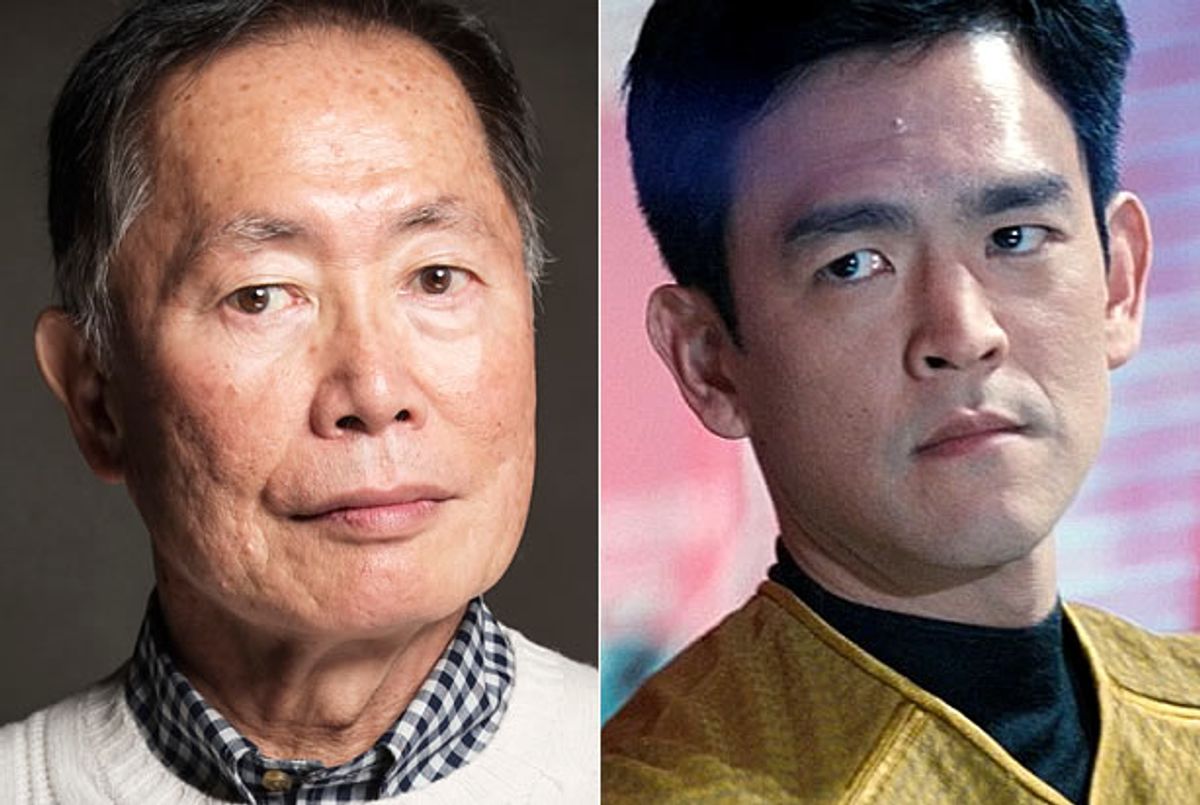 When John Cho outed his character in the forthcoming "Star Trek Beyond" to The Herald Sun's James Wigney on Friday, it was assumed by the film's cast and crew that beloved LGBTQ icon George Takei, who first inhabited the role of "Hikaru Sulu," would embrace the character's new direction.

Instead, Takei told The Hollywood Reporter that while he was "delighted that there's a gay character," he considered the queering of Sulu to be "unfortunate" and "a twisting of Gene [Roddenberry's] creation, to which he put in so much thought."

Simon Pegg — who plays Scotty in the film he also co-wrote with Justin Lin and Doug Jung — published a polite reply in The Guardian, in which he argued that what is truly "unfortunate" is that "the screen version of the most inclusive, tolerant universe in science fiction hasn’t featured an LGBT character until now."

Moreover, he added, "[w]e could have introduced a new gay character but he or she would have been primarily defined by their sexuality, seen as the ‘gay character,’ rather than simply for who they are and isn’t that tokenism?" The answer to that question would seem to be, unequivocally, "Yes" — and to engage in such tokenism would be a betrayal of the more complex relationship to human sexuality long cultivated by the best science fiction.

The history of the future has almost always been more queer than the society science fiction purports to represent. In Ursula K. Le Guin's novel "The Left Hand of Darkness" (1969), the inhabitants of Gethen are neither male nor female, but potentially both — they only acquire sexual characteristics during their "kemmer," a process of mutual negotiation with their chosen partner. As an anthropologist sent to investigate humanity's ambisexual descendants notes, while the social changes of gender fluidity seem small on the surface, in reality they are "incalculable."

The "burden" of child-bearing and -rearing is shared between the partners; children never become attached to a mother or a father, so the Oedipal complex is non-existence; and perhaps most significantly, because social relations aren't divided into strong/weak, active/passive, protective/protected, dominant/submissive pairings from the moment of birth, "the whole tendency to dualism that pervades human thinking may be found to be lessened, or changed," on Gethen.

Salon spoke to Adam Roberts, author of Palgrave's "History of Science Fiction" and an award-winning science fiction writer himself, about both Pegg's decision to have Sulu join the LGBTQ community and what the responses to it, including Takei's own, says about the future of queerness.

"The idea that some of the Enterprise crew would be LGBT is so uncontentious, so obvious," Roberts said, "that I have some sympathy with Simon Pegg’s bafflement at the fuss — he ‘respectfully disagrees’ with George Takei’s disapproval. Takei says it’s ‘really unfortunate’ that Sulu is gay since he wasn’t gay in Roddenberry’s original conception of the character. Of course he wasn’t anything very much, in Roddenberry’s original conception of the character, which is part of the reason why Pegg, Lin and Jung felt able to out him in 'Star Trek Beyond.'"

For Roberts, the more interesting phenomena at work here is the inability of science fiction "to separate out fictional characters and real life persons. The root reason why Sulu is gay in 'Star Trek Beyond' is that George Takei is so prominent, and widely loved, a campaigner for gay rights. There’s a functional blurring of Takei and Sulu here — as if Laurence Olivier were to announce to the press, ‘It’s really unfortunate that Maxine Peake had elected to play Hamlet as a woman; that’s not true to Shakespeare’s original conception of the character.’"

The science fiction community need not be so wedded to "original conceptions" of fictional characters, Roberts says, and instead embrace diversity not because of any larger social agenda, but simply because it exists. "It seems to me that the best way to handle LGBTQ characters is to represent them not as basically the same as straight characters, but certainly as human — as capable of greatness or pettiness, as interesting and varied and so on. LGBTQ characters do not deviate from a norm, and therefore aren’t ‘deviants’; the norm is a convention, not a brute fact of nature."

Even in "The Left Hand of Darkness," in which the narrative was driven by an increasing awareness and acceptance of difference — as the novel closes, the narrator states that "I saw then, and for good, what I had always been afraid to see, and had pretended not to see in him: that he was a woman as well as a man" — the Gethenians live on an isolated planet, the remnants of what some in the novel consider a failed experiment in directed evolution begun millions of years earlier. They are deviants, and they are outside the norm, even if the novel seeks to persuade the reader to share the narrator's more inclusive definition of humanity.

Which is, of course, the most significant issue — how to represent historically underrepresented communities, especially when doing so within the confines of a franchise that, however progressive it was when originally produced, was still originally produced in America during the 1960s. Should members of the LGBTQ community be treated as deviations from the "norm" who require acceptance, or simply as people whose sexuality or gender identification is a fundamental, if incidental, fact of who they are?

Roberts clearly argues that it should be the latter, whereas Takei believes that the character of Sulu will be fundamentally altered — an "unfortunate" revision of his original conception — if he happens to homosexual in the new film. In this respect, Takei is out of step with how science fiction has evolved since Roddenberry first envisioned life aboard the Starship Enterprise, at least inasmuch as straightness is no longer considered the default among characters whose sexuality isn't a central feature of the narrative.

Consider, for example, the case of Poe Dameron in "Star Wars: The Force Awakens." As played by Oscar Isaac, he's swashbuckling without being hyper-masculine and charming without imposing himself on female characters — which in 2016 and, absent an obvious love-interest, is coded as "gay," or at the very least invites that interpretation. So, too, does John "Finn" Boyega joining Isaac on "Ellen" and declaring that, like his co-star, he "was playing romance" in the cockpit scene. Even though the pair were joking, the fact that neither the film nor Degeneres' audience would be surprised if they weren't signals a significant shift in how genre audiences approach LGBTQ issues.

In science fiction, that shift began with Le Guin, but reached its heights in the works of the late Octavia Butler, whose own sexual identity remains something of a mystery to this day. Gender fluidity existed casually, not simply across the human race, but in "Lilith's Brood," across species. The subject as it once stood is perhaps best expressed by a character named Amber in her "Patternist" series, who replied to the question of whether she preferred men or women thus:

He looked away from her. “I asked for the truth. Whether I like it or not, I have to know….”

“You mean you haven’t made up your mind yet.”

“I mean exactly what I said. I told you you wouldn’t like it. Most people who ask want me definitely on one side or the other.”

The crux of this controversy, then, is that Takei represents those who still want to ask, whereas the question doesn't even occur to Pegg, Roberts, or the majority of the audiences in 2016.