The attacks on Clinton are so excessive, so misogynistic, so mean-spirited, it's impossible to criticize her at all 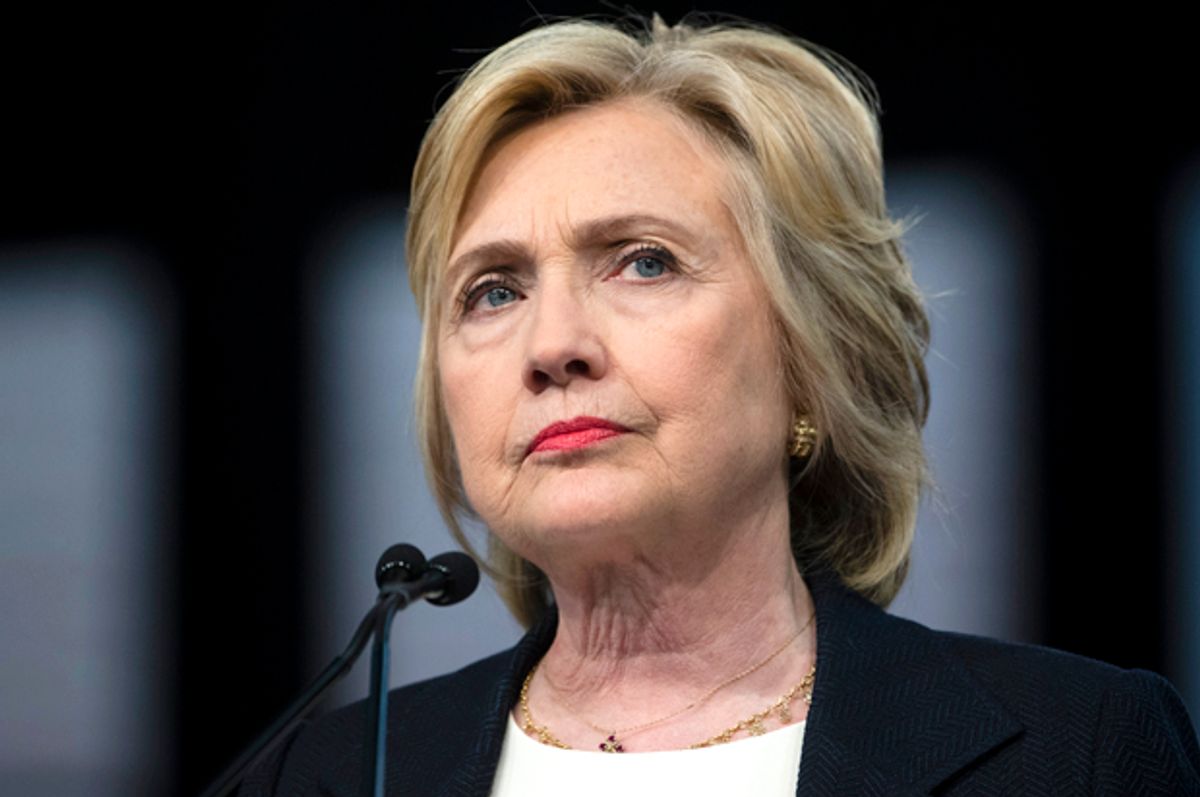 Last week brought two tales of an email scandal. In one version the former secretary of state and presumptive Democratic presidential nominee, Hillary Clinton, committed a crime by using a private email server during her tenure as Secretary of State.  She sloppily handled classified information, left our nation vulnerable to terrorist hacks, and lied repeatedly to the public and the authorities when asked about it.  She was crooked and careless and acted as though she was above the law because she is a scheming she-devil. In another version of the story, there is no story — no crime, no carelessness, no lies worth paying attention to. The case is closed and we should all move on and get ready for to root for Hillary at the upcoming Democratic convention.

For some of us, both of those versions of the story are completely idiotic. They make no sense at all.  But they aren’t equal in their nonsense. One of the versions is far more delirious and far more vicious. And that is the problem.

The right-wing attacks on Clinton are so excessive, so misogynistic, so mean-spirited and so often absent of any connection to reality, that it has become almost impossible to criticize her at all.

It’s no news that Hillary Clinton may well be the most lambasted politician in recent history. And, given the trouncing Barack Obama has endured, that is really saying something.

The shrill, vitriolic, and often hysterical attacks on Clinton have been constant. As Clinton supporter David Brock of Media Matters points out in his book on media coverage of her: There is ample evidence of a sustained right-wing plot to derail her as a candidate. Gene Lyons, another pro-Clinton commentator, has also amassed significant evidence of a “covert and often concerted effort” to take down Bill and Hillary.  If you are skeptical that a Clinton supporter could give an accurate accounting of the many ways she has been attacked, don’t forget that the GOP itself admitted that the Benghazi Committee was solely designed to attack Hillary and hurt her campaign.

Hillary hasn’t only had to deal with the covert and often-overt efforts to discredit her and her husband; she has also suffered a litany of misogynistic attacks.  Recall that Tucker Carlson once said, “There's just something about her that feels castrating," on his MSNBC show "Tucker." Of course, Clinton has often had to endure the bile of Rush Limbaugh, who claimed she has gotten every job she’s ever had because of her husband. In true Limbaugh loony contradiction, he has also repeatedly suggested that she has a “testicle lockbox” that she uses to force men to her bidding. And then there was the time that Ted Cruz suggested on the campaign trial that Clinton deserved a “spanking” for not telling the truth. We’re never getting that horrific image from our heads.

Whether you support Clinton or not, it is hard for a reasonable person to ignore the realities of how she has been bashed by public discourse.  It is also hard to ignore the fact that that very same media bashing has led to a vicious social narrative—buttressed by a pack of social media trolls-- that perpetuates deep hatred for Clinton.

But here’s the problem.  It is increasingly harder to acknowledge that Clinton has been a target of unfair attacks while also asking fair questions about her record.  The brutal and over-the-top attacks on Clinton have shut down calm and reasonable debate about her actual flaws. Any criticism at all seems to ratify the wingnuts. If you don’t want to be associated with those loons, then you might feel obliged to keep quiet.

The fact that Clinton has managed to wage a successful campaign in the midst of these continuous jabs is truly stunning.   But it is also disturbing, because it has converted her supporters into her defenders. Rather than argue for her positive qualities, the dominant narrative of Clinton supporters is that she has been unfairly attacked. Her supporters have often displayed the exact same lack of nuance and critical thinking that we have come to associate with right-wing political rhetoric.

The right-wing logic of “us vs. them” is not just seeping into every aspect of political discourse; it may well be defining the makeup of the two-party system. Much in the same way that we have heard arguments that the Tea Party lunacy of the GOP has led directly to Donald Trump’s success, we could argue that the extreme right has actually enabled Clinton’s campaign.  The more they ganged up on her like angry toddlers, the harder it was for there to be any real discussion of whether or not she would be a good leader of our nation.

If one were a conspiracy theorist, you might even imagine that the power elite on the right assumed that they couldn’t take the White House in 2016 so they angled for a Hillary success so that they could bind up the next four years (or more) with endless scandals and –if they are lucky—impeachment trials.  What better antidote for a lost GOP presidency then to elect a Democratic candidate who could be ceaselessly attacked?

Because the media has constantly pilloried Clinton and because the right has repeatedly manufactured scandals, she now plays the role of victim.  Even better she uses those transgressions to skirt valid questions about her record. When asked by Jake Tapper how she would respond to Trump calling her “corrupt” she replied: "I have a lot of experience dealing with men who sometimes get off the reservation in the way they behave and how they speak. I'm not going to deal with their temper tantrums or their bullying or their efforts to try to provoke me.”

While it makes sense that Clinton would blow off Trump’s attacks, her role as victim allows her to avoid answering any questions.  As the right has become more obstinate, so have Clinton and her camp.

That’s where we have to pause for a moment and assess how Clinton has actually responded to the email scandal.  First of all, there is ample evidence she simply lied.  A lot. We know that she originally stated she used a private server to allow her to email from one device. That has been proven false. We know that despite apologizing for poor judgment, she has consistently passed the blame onto others, suggesting that her colleagues were the ones who should have known the rules.  We also know that she has really refused to take seriously the idea that sensitive and classified information was mishandled and that that information may have actually been leaked. Most importantly we have clear evidence that she has handled this mess with spin and rhetoric more than actual leadership.

Taken together those behaviors might not make her a criminal--although there is some real doubt on that point — but I believe it is fairly clear that they suggest serious flaws in a future president.

The point is that it is time to revise Bernie Sanders’ statement that “we are sick and tired of hearing about her damn emails.” Even if the whole investigation was politically motivated, it turns out that there are some legitimate things to worry about.  As Lee Camp explains on Redacted Tonight, the actual content of the emails is real cause for concern. That’s not even mentioning the whole host of other Clinton practices—her hawkishness, pro-Wall Street record, cronyism, etc. -- that are worth critiquing.

There is one additional disturbing consequence to the Hillary bashing blowback, though.  It is not just the fact that the anti-Hillary and pro-Hillary sides have become completely incapable of nuance or reason; it is the fact that those of us advocating for critical thinking are increasingly stuck in defensive positions that lead us to become more and more intransigent, more and more angry, and more and more inclined to bully back.  In one example, Trevor Noah attempted to cover the story with some nuance, but he still ended up calling Hillary “Grandma Nixon.” The Nixon analogy might be apt, but calling her Grandma smacks of Limbaugh.

Whether fair or not, the Clinton campaign may get credit for finally driving the nation fully into sectarian opposition and away from anything resembling healthy democratic debate.  The real question is whether we will find any productive way to talk about it.