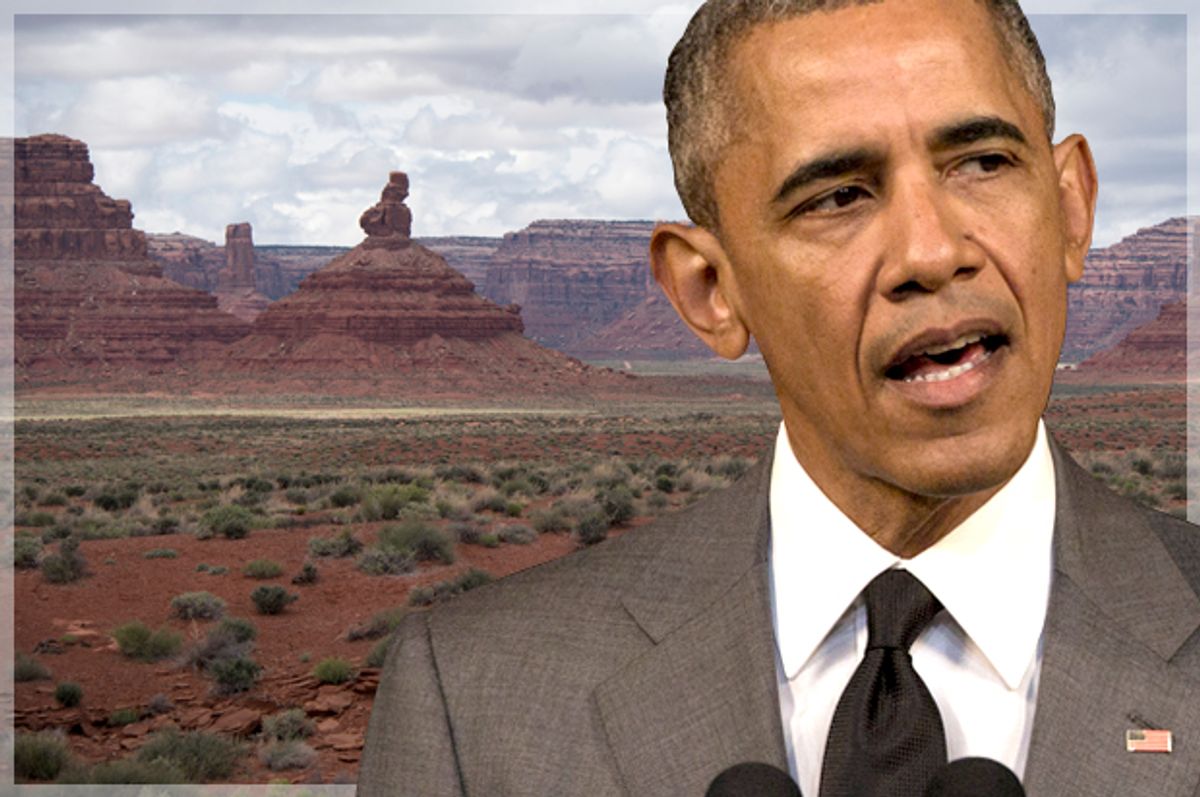 Most Republican politicians kept their distance when a group of armed militants, under the leadership of the infamous Bundy family, took over the Malheur National Wildlife Refuge in Oregon earlier this year. But while they didn't love the optics of the Oregon takeover, it appears that some Republicans do embrace radical opposition to the federal government's power to protect land from corporate exploitation.

The latest battle over public lands pits Republican congressmen against a coalition of Native American tribes over the status of Bears Ears, an area of southern Utah that encompasses 1.9 million acres of mountainous land that features thousands of sites of archeological interest.

Last summer, 26 tribes — from the Hopi Tribe , Navajo Nation, the Ute Mountain Ute Tribe, the Pueblo of Zuni, and the Ute Indian Tribe — joined together to form the Bears Ears Inter-Tribal Coalition to ask President Obama to designate the Bears Ears area as a national monument.

"All of this is threatened — by destructive land uses, such as mining and irresponsible off-road vehicle use and by the rampant looting and destruction of the villages, structures, rock markings, and gravesites within the Bears Ears landscape," the proposal continues.

"People are desecrating grave sites, leaving trash on artifacts," Willie Grayeyes, a board member of Utah Diné Bikéyah, a group dedicated toward protecting lands sacred to indigenous communities, explained over the phone.

If Obama, using the authority of Teddy Roosevelt's Antiquities Act of 1906, were to designate the area as a national monument, these lands would be preserved for the use not just of the tribes, but of any Americans who would like to bask in the beauty or explore the archeological wonders of the area.

It seems like a straightforward proposal, but the tribes are running up against a newly radicalized Republican party that, under pressure from groups like American Legislative Exchange Council (ALEC) and Americans for Prosperity (AFP), has decided to start quietly dismantling the system of federal land protections, with an eye towards turning America The Beautiful into America The Strip-Mined.

This week, the House is expected to vote  on whether to add  Section 453, an amendment offered by Rep. Paul Gosar, of Arizona, and Rep. Chris Stewart of Utah, to a standard appropriations bill that covers interior and environmental management. There have now been over 20 efforts by Republicans during this legislative session to block Obama's authority to designate new monuments.

The amendment lists 48 counties  Republicans want to bar Obama from exercising his powers in. If this amendment passes, then the president would not be able to turn Bears Ears into a national monument, and these lands deemed sacrosanct by the inter-tribal coalition would not be protected from corporate exploitation.

"In fact, the provision would prohibit new monuments from being designated across an incredible 164 million acres of land," reads a letter that a coalition of conservationist groups, including the Wilderness Society and the National Audobon Society, drafted in order to protest this amendment. "Since the Antiquities Act applies only to federal lands and waters, it would block new monuments and park units on over 26% of all federal lands in the continental US."

In addition to this amendment, Rep. Rob Bishop of Utah is trying to fast-track a bill that purports to protect the Bears Ears area, but leaves it far more open to profit-driven exploitation than it would be as a national monument.

These Republican efforts are an "11th hour" attempt to keep Bears Ears from getting federal protections, Mark Maryboy, another board member of Utah Diné Bikéyah argued.

This Saturday, Interior Secretary Sally Jewell will be having a public meeting to discuss the future of Bears Ears, an important step if Obama is to make the area a national monument. Jewell has previously spoken about the need for the national parks and monument system to be more inclusive of Native Americans.

"With the passage of this amendment, we are one step closer to preventing any President from creating new national monuments in Utah and in other areas where there is strong opposition," Rep. Stewart argued, defending this poison pill of an amendment.

Stewart claims that he is "a strong supporter of preserving our national treasures", but his attempts to keep Bears Ears from receiving the highest level of protection suggests otherwise.

Sadly, one can't write off Stewart as some fringe congressman, as he has the support of Sen. Orrin Hatch and Sen. Mike Lee of Utah.

Last month, in an op-ed for the Salt Lake Tribune, Hatch made similar noises about how Bears Ears is "a beautiful part of our state," but then immediately pivoted to demonizing the proposed national monument designation as "federal overreach."

"It would cut out of the decision-making process the local communities that know the land best," Hatch argued.

Maryboy begs to differ, however. "Utah leadership does not know how to work with Native leadership," he says of Hatch, Lee, Stewart and other Republicans, such a Reps. Jason Chaffetz and Rob Bishop, who argue that "conservation and economic development can coexist" in Utah.

"The Utah leadership is in cahoots," Maryboy argued, saying that these conservative politicians are "mostly interested in exploration for oil, gas, and minerals, things of that sort."

Lee's previous efforts to un-protect Bears Ears included an amendment stripping the president of his power to designate national monuments by requiring that any such designations be approved by both Congress and the state legislature first. This amendment, which was a naked attempt to block the movement to make Bears Ears a national monument, was killed off with a party-line vote in the Senate.

"The Antiquities Act has been used to protect gems like the Grand Canyon, Yellowstone, Black Canyon of the Gunnison, and the Tetons," Tania Lown-Hecht of the Outdoor Alliance pointed out over email.

"The Antiquities Act is a way to create greater protections for existing public lands," Louis Geltman, policy council for the Outdoor Alliance, added. "It doesn't take private property, or create new public land. It's a way to ensure that the most important places on America's public lands are protected, and many of the places where it's been used have gone on to become some of our country's most outstanding National Parks."

Most of the people I spoke with were confident that Stewart's attempts to block Obama's powers over national monument designation will eventually fail, as Lee's efforts failed before. Even if the bill passes, which is likely with a party-line vote in the House, "it's less likely it would pass the Senate," Lown-Hecht explained.

But that doesn't mean this isn't a big deal. "There is intense hostility toward public lands in Congress right now," Lown-Hecht continued. "In the year of the parks centennial, with record-high visitation to public land, and broad public support, we should be celebrating our public land and looking to provide more opportunities to protect it for the future, not wasting time trying to destroy one of the best tools we have to protect existing public land."

This widespread support for public land protection — and widespread disapproval associating with right wing militants like the Bundy family — is no doubt why Republicans are being sneaky about their efforts, by burying them in appropriations bills and spouting a bunch of empty "states rights" nonsense. But polling data shows 71% of Utah residents want the Bears Ears national monument, showing that this isn't about the people at all, but about profits.

If Republicans were truly interested in empowering local people, they would listen to tribal leaders and Utah residents who want this national monument designation, instead of listening to corporate interests that want to maximize the amount of land available to exploit for profit.

As for President Obama, designating Bears Ears as a national monument would  help secure his legacy not just as a protector of public lands, but as a president who helped preserve the richness and diversity of American history.