Poor Jeb is right for once: His brand of conservatism is dead — and he's partly to blame 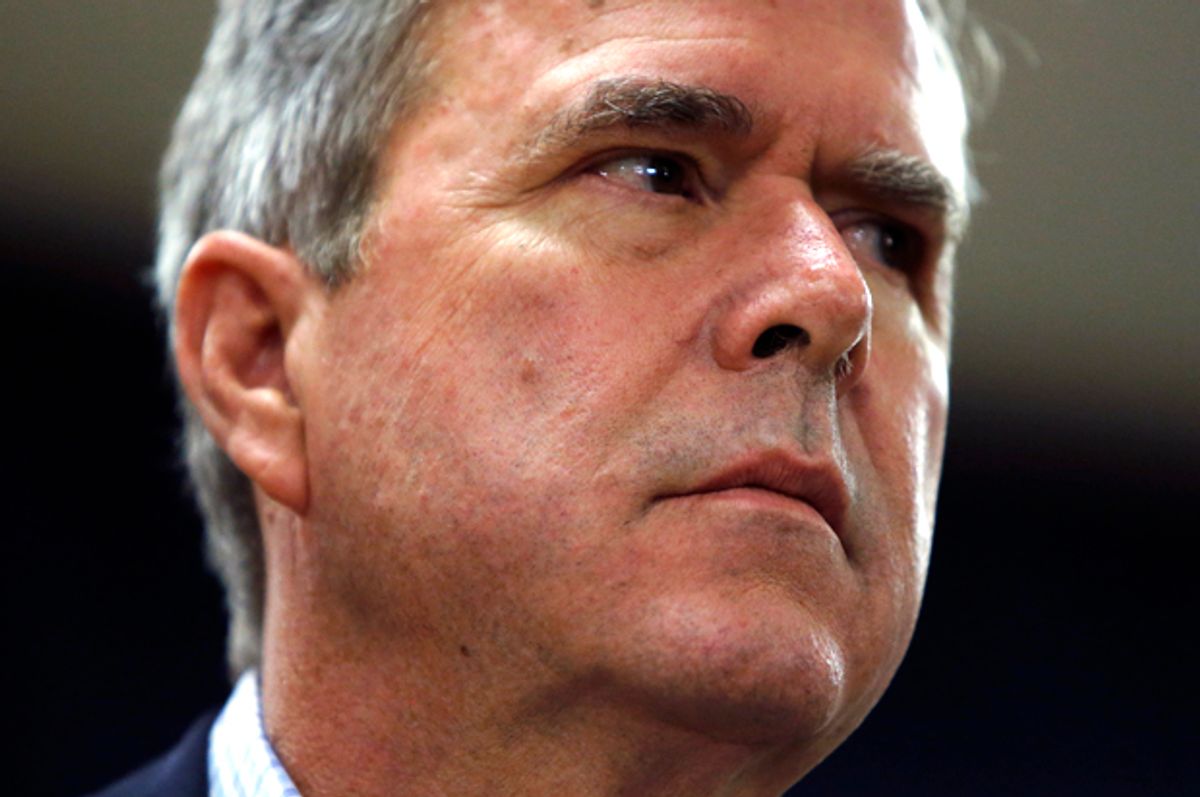 For those of you who thought “Please clap” was rock bottom for the depths of sadness plumbed by Jeb Bush this election cycle, I present to you his interview this week with Nicole Wallace.

Poor Jeb. There he was, looking natty in a collared shirt and sport coat, relaxing in a wicker chair on the lawn of the family compound in Kennebunkport with a wide-angle view of the Atlantic, a fantastically wealthy man taking a breather at his oceanside vacation home in Maine.

Yet his soul was troubled.

Jeb Bush can find no reason to vote for either of the two major party presidential candidates. A former governor of a large state, a man whose father and brother both served as president, whose grandfather was a senator from Connecticut, whose family has been involved in America’s politics at the highest levels for decades, is having a crisis of the soul because his party nominated a callow xenophobe and the other party nominated Hillary Clinton, and they are basically the same in terms of fitness to hold office.

Gosh darn it, if a man who loves his country so much can’t bring himself to fulfill his civic responsibility and vote, then what has even become of America?

When people talk about “white privilege,” you have to think Bush’s actions are a prime example. In an election when poor people around the country, a disproportionate number of whom are minorities, are being denied the right to vote thanks to voter ID and other laws pushed by Republican governors and legislatures in an effort to suppress mostly Democratic voters, here is a member of perhaps the most visible wealthy Republican family in America saying he will not vote in the election because his choices make him too sad.

But the big takeaway from this interview was this admission.

Conservatism is temporarily dead. I mean, if you look at it, we have two candidates. Donald Trump is barely a Republican. He's certainly not a conservative.

No, Trump may not be a conservative in the sense that Bush thinks of the term. But he is a conservative as the word relates to the way the Republican Party has evolved over the last couple of decades, and particularly during the Obama administration. The GOP has become a white reactionary party, paranoid and delusional, jumping at the shadows of Muslim terrorists, gay activists, and angry black people it sees around every corner. Trump is the culmination of years of the party tolerating and even encouraging these sorts of fears.

But conservatism as a political and governing philosophy as understood by the New England moderate, WASP-ish nature of the Bush family? That is most certainly dead, and its death is likely not temporary. For that, conservatives can blame the bungled stewardship of people like Jeb Bush.

Under the leadership of Bush and his generation, conservatism continued its long devolution from a set of principles invoking smaller government into a Madoff-like scheme of shoveling money from one set of accounts into another through legislative maneuvers like tax cuts. Meanwhile, on social issues, conservatives abandoned any principle of limiting government interference in people’s lives by attacking, among other issues, the rights of gay people to participate fully in civic life by enjoying the benefits our society gives to married couples, and by attacking the rights of women to choose what to do with their own bodies.

There is a tension between demanding less government interference in business through onerous regulation while at the same time using government to intervene in private lives. And Jeb Bush was as complicit in ignoring this tension as any conservative politician of the last fifteen years, through his interference in the Terri Schiavo case while he was the governor of Florida.

Now here is Jeb Bush, relaxed and so very, very sad that the con he has helped run on Republicans for decades has collapsed on itself. So sad that he won’t attend the GOP convention in Cleveland next week. So sad that he won’t exercise the right to vote that his party would deny other, poorer, less privileged people if their voting means conservatives – who, we remind you, are pushing a dead political philosophy anyway – lose a few seats in Congress or the electoral votes of battleground states.

The irony is that no matter which candidate wins in November, Jeb Bush will be fine. He’ll still be fantastically wealthy. He’ll still have the power and connections available to any member of the Bush family. He’ll still be able to retreat to the giant house next to the ocean in Maine anytime he wants.