The bright side of Brexit: Leaving the European Union could create a more just Britain 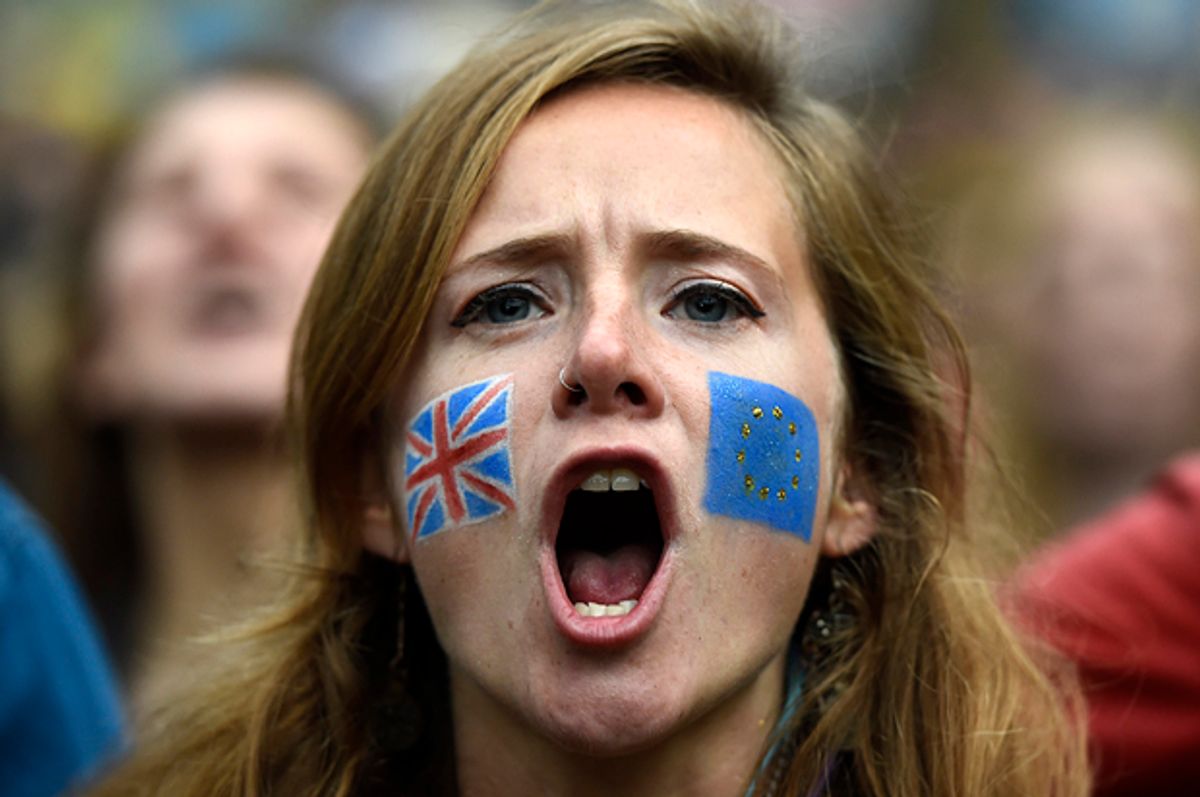 The mainstream U.S. narrative about the British decision to leave the European Union includes hand-wringing and even scorn. Yet I see it quite differently, because I know a European country that long ago decided not to join the European Union and since then has flourished, delivering even more justice and shared prosperity for its people.

This is another moment when we can’t understand a significant issue until we check in with the outliers. Conventional wisdom is occasionally correct, but it is often significantly flawed.

In 1972, the Norwegian national parliament decided, by a large majority, to enter the earlier version of the European Union, which was called the European Economic Community, or EEC. However, enormous protest erupted at the grassroots level. The government was forced to agree to a referendum, and a majority of the people voted “Nei!”

The Labor Party, which had been governing Norway for decades, was shocked. Because the nature of the issue went to the heart of Norway’s future direction, the party regarded the referendum as a vote of no-confidence and resigned. That resignation, however, led to chaos because no major party could step into its place. All had supported membership in the EEC.

Finally a governing coalition was patched together and an interim agreement was signed with the EEC, in lieu of membership, that supported a trading relationship for Norway. That relationship continued when the EEC transformed into the European Union.

The Labor Party hoped that, with further education, the grassroots opposition would wither. It therefore set up another referendum for 1994, but again the proposal for membership failed. Polls from 2013 showed about 70 percent of Norwegians still oppose joining the European Union, and the Socialist Left Party (a junior partner that joined the Labor Party in the governing coalition in 2005) went beyond that opposition, urging departure from participation in the European Economic Agreement that interfaces with the European Union.

Denmark and Sweden have differed from Norway and Iceland when it comes to this issue. The two Nordics whose boundaries meet the rest of Europe joined the European Union. Denmark and Sweden carefully avoided joining the Eurozone, however. They retained their own currencies, giving them flexibility that other E.U. countries lacked when facing the top-down controlling austerity measures that followed 2008.

For my new book “Viking Economics: How the Scandinavians Got It Right and How We Can, Too,” I interviewed Norwegians about what is now the European Union. Those who most opposed membership saw the E.U.’s member countries faltering in whatever loyalty they formerly had to social democratic ideals. In most E.U. countries, the economic elite seemed to be in charge. Joining the European Union, the dissenters feared, would mean that their small country would be submerged in the domination of giant banks and corporations.

Norwegians had corrected their own errant banks in the early 1990s, but most countries did not. When the E.U. members’ financial sectors took a dive, would governments expect the resulting mess to be paid for by the workers rather than those who caused the disaster? The question was answered after 2008: Yes, make the workers pay for the elite’s irresponsibility.

Large corporations from elsewhere continue to make threats in Norway that add evidence to the case made by Norwegians concerned about being out-maneuvered. According to labor leader Asbjørn Wahl, the U.S.-based Kraft Corporation, which bought the iconic Norwegian chocolate firm Freia, pressed workers in Oslo to accept night shifts. If they refused, Kraft said, it would take the jobs to another European country.

Those suspicious of the European Union predict that high Norwegian standards would be pressed downward if it accepted membership, including worker protection and compensation, democratic participation, support for the weakest, and access to economic necessities such as public education.

E.U. opponents say Norwegian agricultural products get such high prices in other countries because they are reliably of high quality, which cannot be said any longer of most E.U. farmers’ products.

Since Denmark joined the European Union, its farmers have become so specialized that the country has lost its food security. In contrast, Norway still meets its own needs for meat and dairy products despite its limited arable land base. Opponents ask: What will happen to food security, and the beauty of Norway’s landscape, if the country joins the European Union, loses its ability to subsidize its agricultural sector, and its farms are returned to logging trees?

Is the European Union the path to peace and democracy?

Labor Party consultant Dag Seierstad told me during our meeting in an office of Parliament that the growing trend toward a joint foreign policy in the European Union collides with the Norwegian vision of peace. When the people of Gaza in Palestine voted for Hamas to lead their government, the European Union reacted punitively, withholding previous financial support for the Gazan people. Norway stepped up its own aid to Palestinians in Gaza, aware of the increased suffering. “We must retain our independence,” Seierstad said, “in order to follow our own responsibilities as peacemakers.”

I know British voters who likewise want the chance for a foreign policy more peaceful than the European Union’s. When their peace campaigns bear fruit, they want Britain to be free to implement fresh policies rather than toe the line of the European Union (or, of course, the line of a militarist United States).

Just as important, Brits who have suffered from the post-2008 austerity program of massive cutbacks in health, education and other needs have an excellent reason to want freedom from the E.U.’s rule by the 1 percent. Their fight is with Britain’s own economic elite, and when they start winning again — as they did in the first half of the 20th century — they likewise want the freedom Norwegians have to implement social democracy.

For my book, I checked the international ratings that compare countries by measures of well-being like equality, poverty-prevention, health care, parental leave, elder care, individual freedom, etc. Typically, the ratings put the Nordic countries at the top. In the Organization for Economic Cooperation and Development list of the richest countries in the world, the United States is typically at or near the bottom of the ratings, and the United Kingdom somewhere in the middle. Within living memory of older people, the United Kingdom placed higher. Their struggles had achieved more equality and shared prosperity. But the longer they stayed in the European Union, the farther down in the ratings they went.

In the light of that track record for E.U. membership, who can say it was irrational to vote for Brexit? And who can fail to notice that so much of the working class, which has fared the worst in this downward trend, rejected the advice of its Labor Party leadership and voted to get out?

What about nasty nationalism?

Of course when the British or Norwegians vote against the European Union, some of them are motivated by racism and ethnocentrism. Mixtures of motivations are standard in politics. To reduce a whole electoral demographic to a disliked part, however, is that tired stereotyping we already get enough of when people do racist rants and indulge in Islamophobia.

An equally bogus claim is that Brexit means “leaving Europe.” As an Icelandic soccer player remarked on NPR the other day, Britain remains as much a part of Europe as ever, just as Iceland is, which is another non-member of the European Union. Many Canadians wish they were not a part of NAFTA, but scrapping NAFTA (a wish that many Americans also share) does not mean “leaving North America.”

My Nordic research tells the real story about “nationalist” behavior. Norwegians typically give the highest per-capita contribution to foreign-aid efforts like the U.N. Development Program — they are proud that the first general secretary of the United Nations was a Norwegian labor leader, Trygve Lie, and they supply volunteers and support for unarmed peacekeepers like Peace Brigades International and Nonviolent Peaceforce.  In Cambodia, I ran into a Norwegian military unit busily engaged in de-mining fields where mines had remained when the U.S. war on Cambodia was over.

When Norwegian journalists or travelers become aware of bad practices being done in some other country by a Norwegian company, they can go to a public agency funded by the government that forces the company to come in and account for what they are doing elsewhere that they would not be allowed to do under exacting, people- and nature-friendly Norwegian law. The agency has the power to ban that company’s behavior.

This is the other side of nationalism, a pride in the high standards they have achieved through decades of struggle and an insistent demand that those standards not be compromised outside the borders whether for exploitation or carelessness.

Contrast that collective self-respect that understands people-centered solidarity both inside and beyond national boundaries, with the elite-centered “unity” implemented by an undemocratic Brussels bureaucracy.

I’m on the side of the Brits — who, despite years of class war in which the rich have been winning — still hope to regain the offensive and put social democracy back on the agenda. Judging from the website of the Trades Union Congress, or TUC, labor leadership may have given up that hope. But that leadership is not reckoning with either the climate crisis that opens new opportunity for change — journalist Naomi Klein’s observation — or the yearning of the TUC’s own rank-and-file dramatized by the Brexit vote.

And who knows? Maybe in this next period of struggle, the Brits will go beyond implementing the social democratic model and invent a 2.0 version — a deeper step toward liberation.