Dance into the fire: A close look at Duran Duran's low-key red-hot tour of the summer 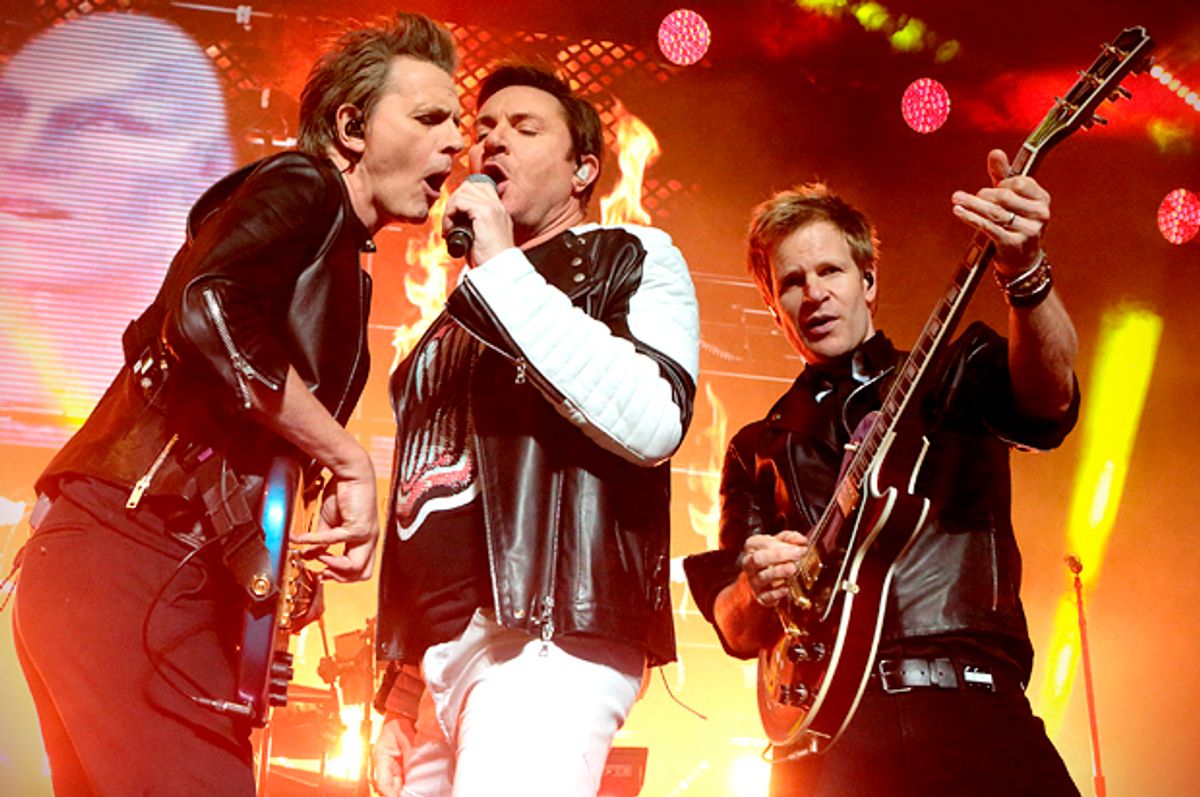 By now, the summer touring season is in full swing. Although superstars such as Taylor Swift and Katy Perry are taking the season off, there's no shortage of in-demand blockbuster treks—to name a few, Adele, Beyoncé, Guns n' Roses, Radiohead, Paul McCartney and (starting in August) Kanye West—and the usual slate of classic rock and country package deals, amphitheater shows, stadium tours and outdoor festivals. Still, the hottest tour of the summer is actually more low-key than any of these outings: Duran Duran with opening act Chic featuring Nile Rodgers.

From a musical level, the pairing is a no-brainer. Duran Duran has collaborated with Rodgers off and on since the early '80s, and this partnership has led to No. 1 hits ("The Reflex"), fan favorites (1986's funky strut "Notorious") and genre-busting singles (2015's "Pressure Off"). Both have also redefined dance music, mainly by scribbling outside of the lines: Rather than going by trends or formula, Duran Duran and Rodgers—the latter both with Chic and in his own production and writing work—rely on feel, instinct and groove to create indelible tunes.

Yet from a career standpoint, both Duran Duran and Rodgers know what it's like to be an underdog. Although chart success has never eluded either, they've had to navigate and overcome negative stereotypes and shifting trends. Chic's association with disco became detrimental in the wake of the "Disco Sucks!" movement of 1979. "It happened and then we had one of the biggest records of our career with Diana Ross! [1980's 'Diana']," Rodgers told The Guardian in 2014. "But by that time Chic was toxic. Even my friends were bad-mouthing us. It was really not a nice period." In fact, he credits David Bowie with helping salvage his career. "At the time in my life that I was persona non grata, when no one would work with me because of 'Disco Sucks,' this guy, who was considered one of the great, innovative rockers, picked a disco guy, who nobody wanted to work with, to collaborate with," Rodgers told Yahoo! in January after Bowie passed away. "And we wound up making the biggest record of his career, 'Let’s Dance.'"

Duran Duran, meanwhile, was considered a boy band—which meant the group wasn't taken seriously from a musical standpoint—and weathered lineup changes that disrupted the creative process. By Y2K, they were at a low point, playing smaller venues and floundering after albums such as 2000's "Pop Trash" didn't take off commercially. Still, Duran Duran's fortunes turned around after an early-'00s reunion of the original quintet: In fact, last year's "Paper Gods" LP debuted at No. 10 on the album charts, the band's best performance since 1993's self-titled effort.

Yet what's great about "Paper Gods" is its commitment to progress. Duran Duran isn't trying to rewrite "Rio" or "Planet Earth"; instead, the album focuses on modern-sounding synthpop with an ear to futuristic sounds, beats and textures. Rodgers' body of work as well reflects his constant forward motion. His Daft Punk and Pharrell collaboration/smash "Get Lucky" was both retro and out of this world, while he recently released a song with country star Keith Urban and pop staple Pitbull, and just had a No. 1 on the Billboard Dance Club Songs chart with the Alex Newell and DJ Cassidy collaboration "Kill The Lights." If anything, Rodgers is busier and more creative than ever—a state he's said came about after his very-public (and successful) battle with cancer.

As a result of these personal and career-based ebbs and flows, neither act takes music for granted—a mindset which translates to an exuberant concert experience. On a recent Monday night at the DTE Energy Music Theatre outdoor amphitheater outside of Detroit, the two groups threw what felt more like a riotous Saturday night dance party.

In a quirk of timing, Chic featuring Nile Rodgers—which had a horn section, keyboardists and powerful vocalists as well as the usual band instrumentation—strolled onstage when it was still daylight. No matter: The nightclub vibe erupted immediately with the crisp disco triptych of "Everybody Dance," "Dance, Dance, Dance (Yowsah Yowsah Yowsah)" and "I Want Your Love." A medley of Diana Ross and Sister Sledge tunes let Rodgers demonstrate the breadth and depth of Chic's songwriting and production; this led to an uplifting, cathartic take on "Get Lucky" and an emotional performance of Bowie's "Let's Dance"—whose icy percolations still sound beamed in from a distant, funky planet. After that, the energy just kept building: By the end of the set and the one-two punch of "Le Freak" and "Good Times," the entire audience was up and dancing—sweaty and grinning, absorbing Chic's good vibes, and primed for the rest of the show.

Duran Duran delivered too, of course, with a set drawing from "Paper Gods"—the soulful electro title track and the astronaut-floating-in-space atmosphere of "What Are The Chances"—and their vast catalog. (They also paid tribute to Bowie with a touching "Space Oddity" segue—appropriately—during the alienated "Planet Earth.") This set had just as much infectious energy as Rodgers' opening slot did, with highlights including a fist-pumping, guitar-heavy "The Wild Boys"; the Bond theme-sophistication of "A View To A Kill"; a stunning "Ordinary World"; and the Roxy Music-goes-glam "Girls On Film." In a nod to die-hards, Duran Duran also dug deep into their career and dusted off a few chestnuts: the marbled funk of "I Don't Want Your Love" and an industrial-punky cover of Melle Mel's hip-hop classic "White Lines (Don't Do It)."

Of course, Rodgers' presence on the tour meant he joined Duran Duran mid-set for "Notorious" and "Pressure Off." Hearing the former song with Rodgers adding his familiar, effortless guitar strokes was an added treat for fans and, not so secretly, the band. Vocalist Simon Le Bon—who was in a cheeky mood all night—even introduced his long-time pal by enthusing about his talents and then noted his majestic presence by noting, "If he were British he would be Sir Nile Rodgers. Tonight, he's Sir Nile of Rodgers!" The affection was mutual and universal, going by the gigantic grins on the faces of everyone onstage during this particular interlude.

Above all, the positive energy circulating around the venue the entire night lingered well after the show ended. Moms brought their kids to see what the fuss was all about; married couples were moving and grooving together; and groups of old friends were dancing together like they were 15 again. Nobody was being a jerk or rude; everyone was simply enjoying the music. (As any concert-goer will note, that's not always the case.) Being able to engender this kind of goodwill goes a long way to explain the career longevity and renaissance of both Duran Duran and Nile Rodgers, however. Their music is (and always has been) fearless and celebratory—exuding the kind of sincere joy that resonates and endures simply because it comes from the heart.