"Stick to sports" is no longer an option: What it means for NBA stars to take a stand for Black Lives Matter 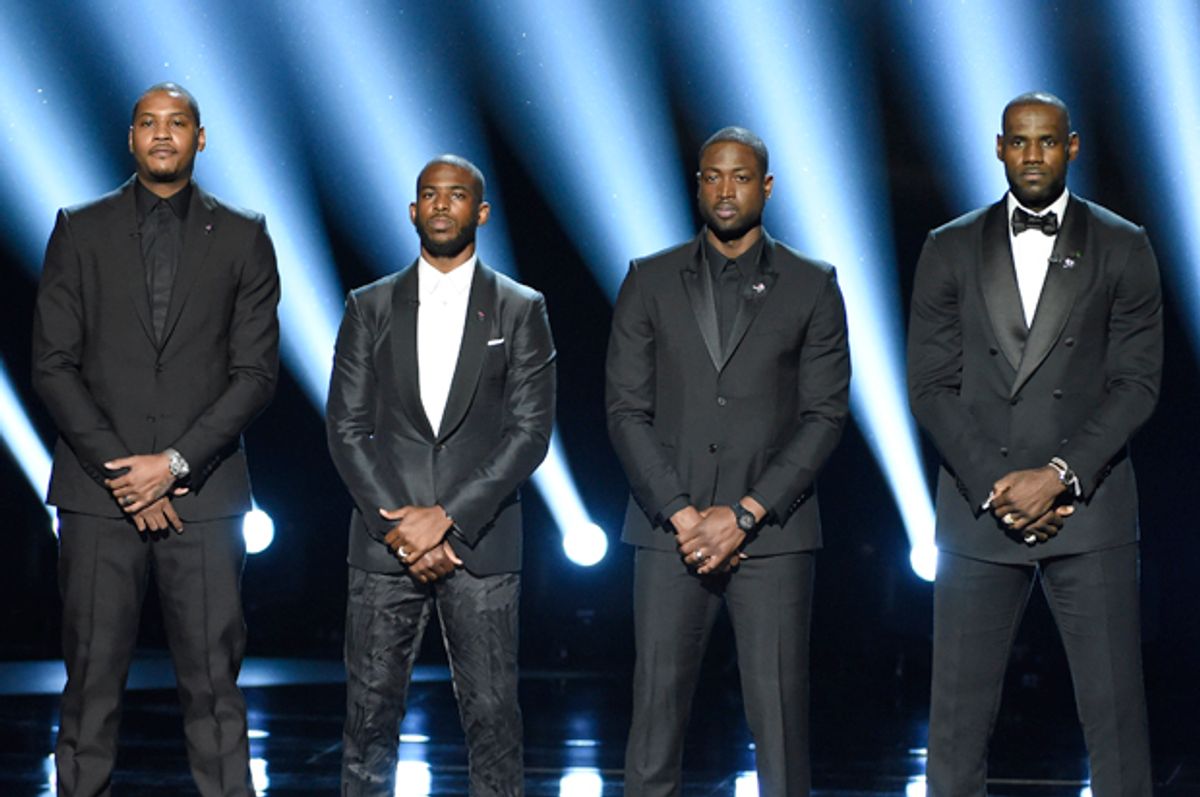 Last night, four black men spoke candidly on national television about race and police violence in America. It’s encouraging, if long overdue, that these conversations are now happening in the plain light of day; law enforcement has been killing African-Americans with relative impunity for decades but over the last few weeks, there’s been such a spike in (white) awareness that even Newt Gingrich has issued a statement just this side of woke.

But what made Thursday’s statement so remarkable was that it wasn’t pundits or talking heads sounding off. And the forum wasn’t a mainstream news program. Instead, it was LeBron James, Dwyane Wade, Carmelo Anthony and Chris Paul—four of the NBA’s most prominent players—taking the stage to open the ESPYs, ESPN’s annual awards show. Clad in black suits, these perennial All-Stars took a stand against racial profiling and extrajudicial murder before issuing a challenge to themselves and fellow athletes. As James put it, “we can all do better.”

Athletes rarely, if ever, talk like this. They mince words and dance around issues; when they do speak out, it’s generally in broad strokes. And you can hardly blame them for their reticence. When an athlete takes a stand on a divisive issue, he’s often dismissively told to “stick to sports.” More cynically, his personal brand could take a severe hit. For them addressing issues is optional; when they decide to do so, it’s a calculated decision. For fans with a political conscience, we’ll take it where we can get it. After all, these are celebrities, not experts. They never asked for this platform.

What we heard from James, Wade, Anthony and Paul, though, was something else altogether: Athletes can no longer afford silence. It’s not just a matter of responsibility. We’ve reached a point where the plague of police violence represents an existential threat to people of color in this country. As black men, these four players know they are affected no matter how wealthy or removed from daily life they may be. They don’t have the luxury of sitting back and weighing their actions or, to paraphrase Wade, present themselves as well-intention without significant follow-through. This time, it’s personal.

To be fair, this group—a tight-knit group of friends who routinely flex their power around the league—haven’t exactly ignored current events. Over the past few years, all have expressed their frustration and concern, albeit in relatively subtle ways. Lately, Anthony has been particularly vocal, with a long Instagram post and Guardian op-ed that addressed the topic head-on. But by presenting a unified front at the ESPYs, they embraced their role as activists. In calling for other athletes to follow suit, they weren’t laying a guilt trip on anyone. They were sending a clear message: Whether we like it or not, this is our fight.

It’s telling that it was four basketball players on that stage. While many people would love to keep politics out of sports—or pretend that that the internal politics of sports aren’t shaped by race, class, gender, and labor—with the NBA, the visibility of race is unavoidable. Football players are invisible, cogs in a system who play with their faces hidden. Baseball has plenty of issues but not that many African-Americans. The NBA, on the other hand, is a predominantly black league where a relatively small number of athletes play a game that both exposes them almost completely and often encourages self-expression. Professional basketball is practically set up to generate fame and visibility, generating exactly the kind of figure expected to have an opinion about race-related matters. James, Anthony, Wade, and Paul may have presented their statement as necessary, but it was still brave. By taking the stage as a group, these four NBA players, in effect, acknowledged that their sport is the standard-bearer when it comes to athletes refusing to “stick to sports.”

We should acknowledge also that their inspiration could very well have come from outside of their sport. The legacy of Muhammad Ali cast a long shadow over the ESPYs; while Paul presented a long list of other activist-athletes, Ali’s passing threw into sharp relief not only how little we usually get from today’s athletes but also the degree to which we’ve lowered our expectations. Whether or not they’re obligated to speak is beside the point; until last night, any gesture whatsoever was applauded. Despite their near-universal respect for Ali, today’s athletes haven’t exactly followed in his footsteps.

By admitting that they simply haven’t done enough, James and his peers have raised the bar. The four may have acted because they themselves feel threatened. But in so explicitly doing so—and in laying out such a convincing case for athletes engaging with the issues of our day—they strongly implied that going forward, they have no interest in playing it safe. This has the potential to be a breakthrough moment for sports, not only in calling for real action but also in transforming the “should” of athlete activism from an obligation to a responsibility. While still an imperative, it’s one that they can fully embrace, rather than having it imposed upon them.

There were certainly a few concessions made, or at least attempts to broaden the topic. Paul emphasized the need for a positive relationship with the police. Elsewhere, there were nods to the Dallas shooting and black-on-black crime. But the optics of that night were simply unavoidable: The statement was almost immediately labeled “a Black Lives Matter speech” by people on both side of the issue (that this is even an “issue” with “sides” is itself repugnant); its polarizing reception and proliferation across social media were an indication of just how powerful it was to hear athletes talk this way.

After the four were finished, news leaked out that ESPN never planned for this to happen; the athletes themselves had approached the network with the idea. Kudos to them for being game, I suppose, but at the same time, they couldn’t exactly say no; at a time when corporate entities are voicing support for BLM, it would have been a public relations disaster if a network refusal became public knowledge. At the same time, though, ESPN can’t afford to refuse LeBron James. He’s too important, too influential, for a media property that huge (or for that matter, a professional league that relies so heavily on him) to get on his bad side.

Athletes speaking out may still be taking a risk. But last night taught us a lot about the possibility of them doing so on their own terms, at the times they deem appropriate. On every level, it was an exercise in autonomy. LeBron James, Carmelo Anthony, Dwayne Wade, and Chris Paul may have felt like they had no choice. They made a plan and, just as Wade insisted others do, made sure it was realized. Hopefully, athletes—or at least those at the top of their respective sports—no longer feel like they need permission to voice opinions. And if they’re the ones who take the initiative, this responsibility becomes something else altogether. It becomes a way of life.