Theresa May is kind of dangerous: Britain's new prime minister has a nasty Islamophobia problem

Conversative Party's May has driven extreme policies that surveil and criminalize Muslims, migrants and refugees 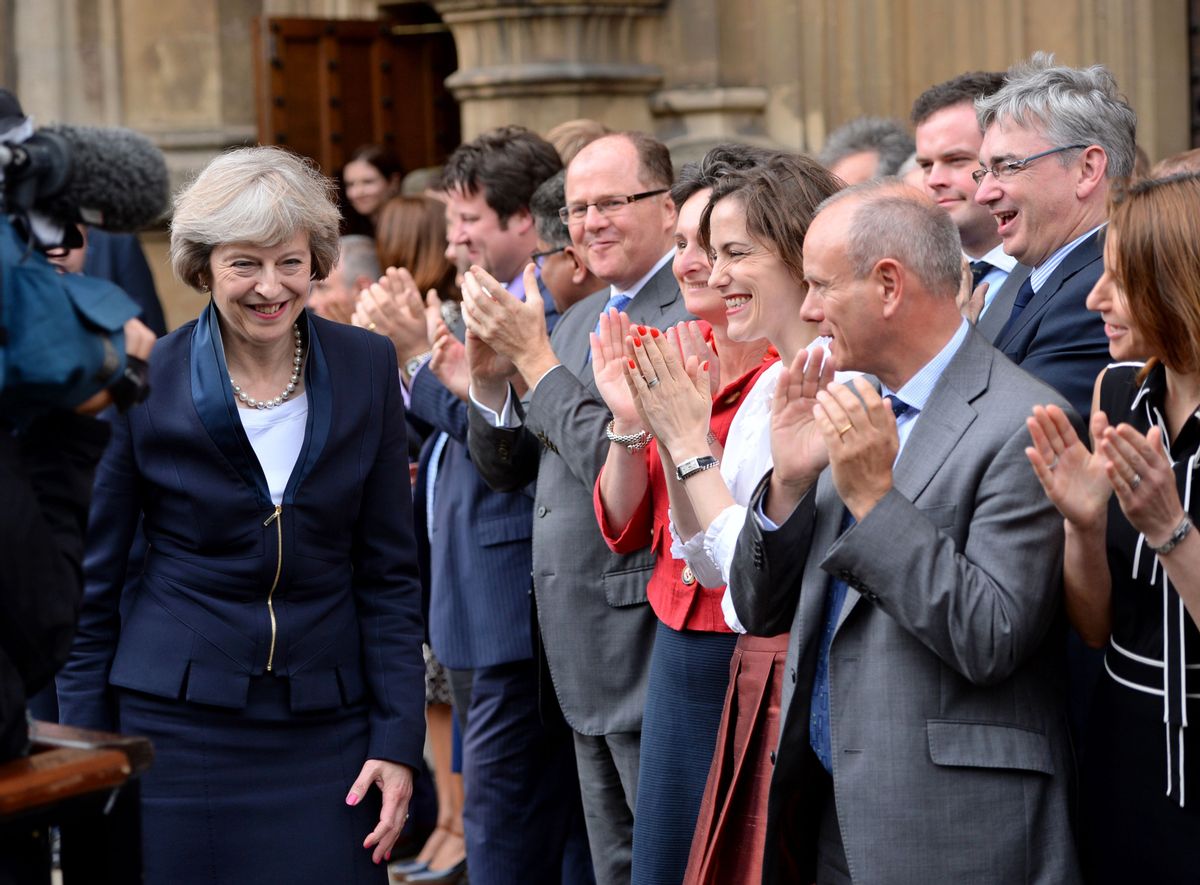 Britain's Theresa May, left, is applauded by Conservative Party members of parliament outside the Houses of Parliament in London, Monday July 11, 2016. Britain's Conservative Party has confirmed that Theresa May has been elected party leader "with immediate effect" and will become the country's next prime minister. Prime Minister David Cameron has said he will step down on Wednesday July 13, 2016 and May will immediately replace him. (Dominic Lipinski/PA via AP) (AP)
--

Now that the Conservative Party’s Theresa May has officially become the next prime minister of Britain, much of the media coverage is focusing on her “unpredictability,” “resolve” and, unfortunately, her favorite style of shoes.

But as the United Kingdom reels from a post-Brexit surge in racist hate crimes and xenophobia, a key aspect of May’s legacy is going underreported: her role in driving policies aimed at surveilling, criminalizing and extraditing Muslims, refugees and migrants.

From the beginning of her tenure as home secretary in 2010, May has been a key backer of the controversial “Preventing Violent Extremism” (Prevent) program, which was launched in the aftermath of the 2005 London bombings. Under this strategy, Muslims unconnected to wrongdoing have been subject to surveillance and criminalization. The initiative is so stigmatizing and alienating that it was criticized by a committee of British lawmakers in 2010.

While the government claims that Prevent targets extremism in all forms, data shows that Muslims — who only make up 5 percent of the national population — are targeted in the vast majority of cases.

May immediately threw her weight behind the program, declaring in 2011, “Prevent is an integral part of our counter-terrorism strategy and aims to stop people from becoming terrorists or supporting terrorism. Our new Prevent strategy will challenge extremist ideology, help protect institutions from extremists and tackle the radicalization of vulnerable people. And we will not fund or work with organizations that do not subscribe to the core values of our society.”

But her legacy has gone beyond mere support for Prevent. According to Arun Kundnani, author of The Muslims are Coming! Islamophobia, extremism, and the domestic War on Terror, May has “defended it, backed it and driven it to a more authoritarian place.”

“Under her influence," Kundnani said, "the policy has gone from paying lip service to the idea that it was focused on terrorism to being focused on what May refers to as ‘extremism,’ which is actually a different concept from terrorism. She has been responsible for introducing a concept of extremism that means someone who does not share fundamental British values. This has meant a clampdown on people who can be perceived to be outsiders, as not having the right culture.”

In November 2014, May proposed the “Counter-Terrorism and Security Act,” which was implemented in 2015 and dramatically expands the powers of the government to seize passports of people suspected of traveling outside of the United Kingdom for a “terrorist activity” and permits the temporary expulsion of suspected terrorists. The bill also widens government powers to spy on online communications data and, in its perhaps most controversial measure, requires that schools monitor and surveil students for signs of “extremism.”

The National Union of Teachers roundly condemned Prevent for unfairly targeting Muslim students, and in response to the policy, a youth campaign called “Students Not Suspects” has emerged. According to a briefing released in February by the advocacy organization CAGE, “Children across the U.K. are being interrogated at school on their personal beliefs and religious practice without the consent of their parents or guardians.”

This bill earned May the dubious distinction of “the year’s worst Islamophobe” in the Islamic Human Rights Commission’s 2015 Islamophobia awards. "May, who beat her ex-cabinet Tory Party colleague Michael Gove to the prize, has been a driving force behind the introduction of yet more repressive legislation targeting the Muslim community," said the organization.

May’s anti-Muslim tendencies predate the recent mass surveillance bill. Under May in 2012, Mahdi Hashi was left stateless after being stripped of his British citizenship and rendered to the United States on terrorism charges. He was held in solitary confinement for at least three years before his sentencing in January 2016.

Also in 2012, May oversaw the extraditions of British men Talha Ahsan and Babar Ahmad to the United States in cases that for many are emblematic of the overreach and injustice of hardline "war on terror" practices.

May is also known for aggressive anti-immigrant policies. In 2013, she organized a campaign to post billboards, flyers and even drive a van around London featuring the message, "In the U.K. illegally? Go home or face arrest." As recently as March 2016, she was accused of wrongfully deporting up to 50,000 international students.

May’s hardline positions extend far beyond domestic surveillance. She voted in favor of the 2003 invasion of Iraq, as well as troop deployments to Afghanistan, Syria and Libya.

May takes the helm of a deeply divided country, in a continent facing a far-right resurgence. According to Kundnani, in the post-Brexit U.K., “there is a kind of celebratory racism going on where people are ramping up hate crimes enabled by the Brexit vote. In that context, what we need is a strong commitment to principles of racial equality and defending communities from racist violence. Unfortunately, it is difficult to imagine Theresa May as part of the solution.”