Up in smoke: We’ll spend billions tomorrow for not helping the poor quit smoking today 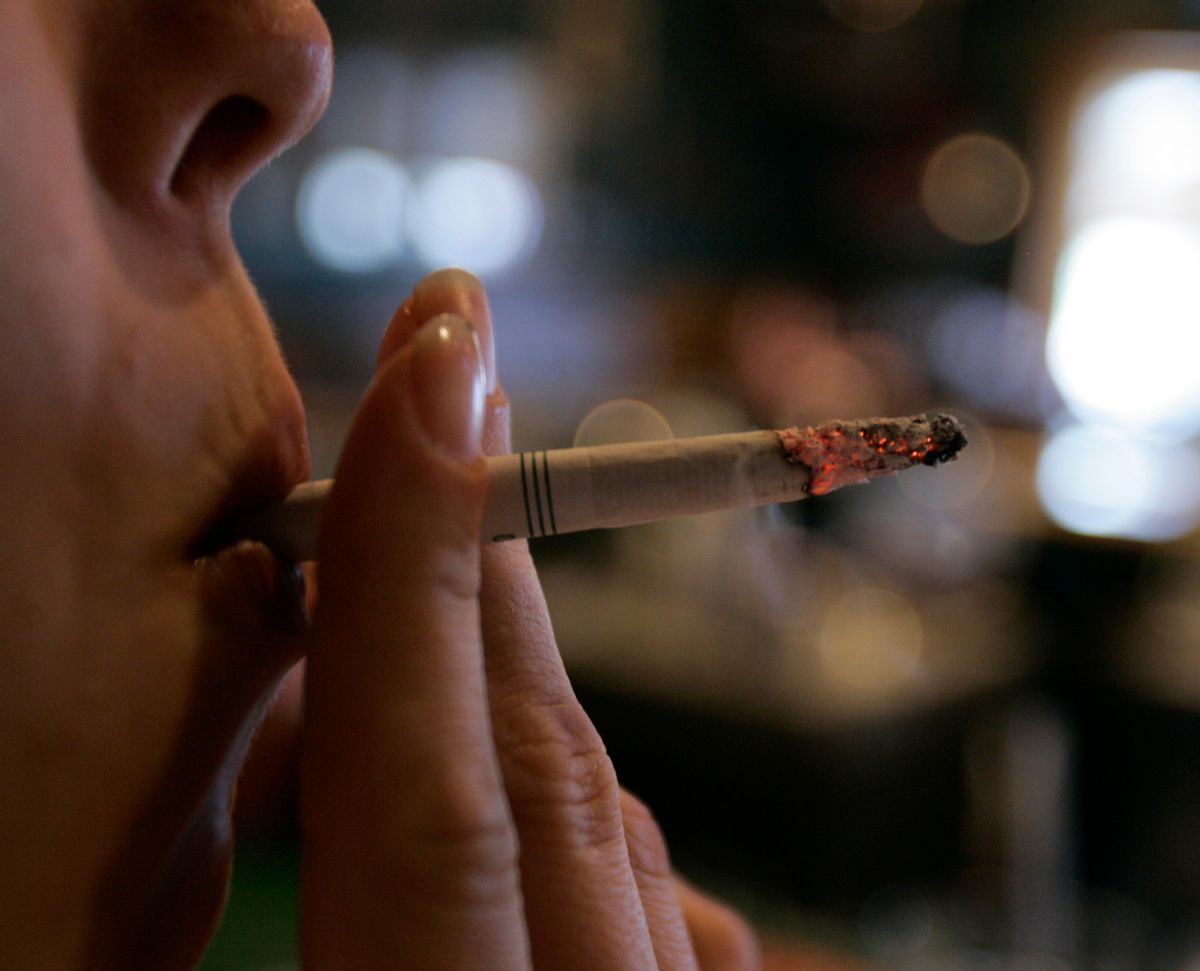 FILE - In this Tuesday, June 3, 2008 file photo, an employee smokes a cigarette at a bar and restaurant in Harrisburg, Pa. In a study released Wednesday, May 13, 2015, smokers with $150 of their own money at stake were far more likely to quit than smokers who didnt have to wager their money to get cash rewards. "A bit of a stick was much better than pure carrot," said the study's lead author, Dr. Scott Halpern of the University of Pennsylvania. But heres the catch: Few people were willing to bet on themselves. Nearly everyone who was offered the rewards-only option, though, signed up for a stop smoking program. (AP Photo/Carolyn Kaster) (AP)
--

The gradual reduction of smoking — the number one cause of preventable death and illness — is one of the triumphs of public health in the United States. About 16.8 percent of Americans smoke today, compared to 42 percent in the 1960s.

But even as those in the middle class have given up the habit, smoking has remained a serious problem among low-income Americans, who are about twice as likely to smoke as middle- and upper-income adults. Smoking rates for those with a GED certification are 43 percent, compared to 5 percent of those with a graduate degree.

Public health efforts focus on the twin goals of preventing Americans, particularly youth, from smoking in the first place and the more difficult task of helping those already addicted to quit. But key public policies to prevent smoking, through cigarette taxes and laws that limit smoking in offices and public restaurants, have stalled. The Centers for Disease Control and Prevention (CDC) researchers found that the extent to which states are raising cigarette taxes or creating smoke-free areas is not continuing to climb in recent years. Thus, progress in those areas — which are known to be effective — has stalled.

These gaps will not only result in greater health problems down the road but will also cost the nation many billions of dollars because of resulting medical bills and lost productivity.

And yet, the very people who need help the most — the poor — are not getting the help they need. Research that others and I recently conducted at George Washington University indicated that Medicaid could be doing much more (as could private health insurance) to help smokers who are poor to stop smoking. Our study showed that Medicaid, the nation’s health insurance program for the poor, could help its enrollees far more than it already is.

Medicaid generally covers the costs of medications that make it easier to quit by easing nicotine withdrawal and the costs of counseling about how to change habits. What it has not yet done effectively is encourage or enable its enrollees to use these benefits to stop smoking.

The Obama administration’s Affordable Care Act has led to major expansions of Medicaid in more than half of the states. It is now the largest insurance program in the country. Using the reach and financial clout of Medicaid to promote smoking cessation could greatly advance the nation’s health.

And yet, only about one in 10 of smokers in Medicaid receive the medications, nicotine patches or gum that can help them quit. And while there is no data indicating how many people receive counseling, we do know that it is a very small percentage — certainly lower than ten percent.

Heart attacks, cancer and a price tag of $75 billion

Medicaid programs are primarily managed by the states.

Some states reach up to one-quarter of Medicaid smokers, but many do not even reach 10 percent, according to our study. This, to our mind, is a major public health crisis. Medicaid agencies, working with their public health sister agencies, managed care plans, advocates and ultimately with physicians, nurses and patients, should make smoking cessation a priority.

Why should smoking cessation be so vital? It is not just the toll of heart attacks, cancer, asthma, chronic obstructive pulmonary disease and other illnesses caused by smoking that steal the lives and health of smokers and their family members through secondhand smoke. Smoking also has enormous financial costs.

The CDC estimates that 15 percent of all Medicaid costs — now over $75 billion a year — are related to smoking. We are already paying this bill and will pay even more down the road. The costs of treating emphysema, heart disease and the more than 30 cancers caused by smoking combined with the lost productivity associated with smoking are estimated to be $300 billion per year. And smoking is costly to smokers and their families, too: a pack of cigarettes per day can easily cost $2,000 to $4,700 per year.

To help smokers quit, Medicaid has the wherewithal to eliminate financial barriers to the use of medications and counseling. In addition to coverage available in Medicaid under the federal health reform law, smoking cessation, like other evidence-based prevention methods, must be offered without co-payments or deductibles to those insured by Medicare and most private insurance, essentially making these free. Moreover, all states have telephone quit lines that can give free advice to smokers, as well as their family and loved ones.

These systems, however, cannot be effective if patients and their doctors do not even know that the benefits are available, if patients are not sufficiently motivated, and if health systems and insurers do not actively promote quitting.

It’s worth emphasizing that more deliberate efforts to bolster quitting can pay off. A study of a Massachusetts program to promote smoking cessation in Medicaid showed that it helped reduce the rate of smoking and saved $3 in hospital costs for every dollar invested. The savings were due in large part to the prevention of heart attacks and other cardiovascular diseases.

And yet, Medicaid spends a minuscule fraction of the $75 billion in medical costs caused by smoking — only about $100 million per year — on medications to help people quit.

We should be realistic. Cigarettes (and other forms of tobacco) are addictive and can be really hard to quit. People often stop for a short time but then relapse. However, even short periods smoke-free can rapidly improve health, particularly cardiovascular health. And those who relapse can try again and eventually attain longer-term success. The research evidence shows that medications and counseling improve success rates for quitting.

It is important to acknowledge that we do not know the most effective ways to help all smokers quit. Approaches that work for some patients might not work for others. But we can start by giving these issues attention and monitoring what works and what does not.

A final remaining issue is that 19 states, largely in the South, still have not expanded eligibility for their Medicaid programs, and smoking tends to be even more common in those states. Residents of those 19 states continue to bear a heavier health penalty because they cannot readily get access to benefits to help them quit smoking. Expanding Medicaid will make smoking cessation available to more people, something that can reap benefits for smokers, their families and taxpayers for years.