Report: Sept. 11 hijackers "received support or assistance from individuals who may be connected to the Saudi Gov." 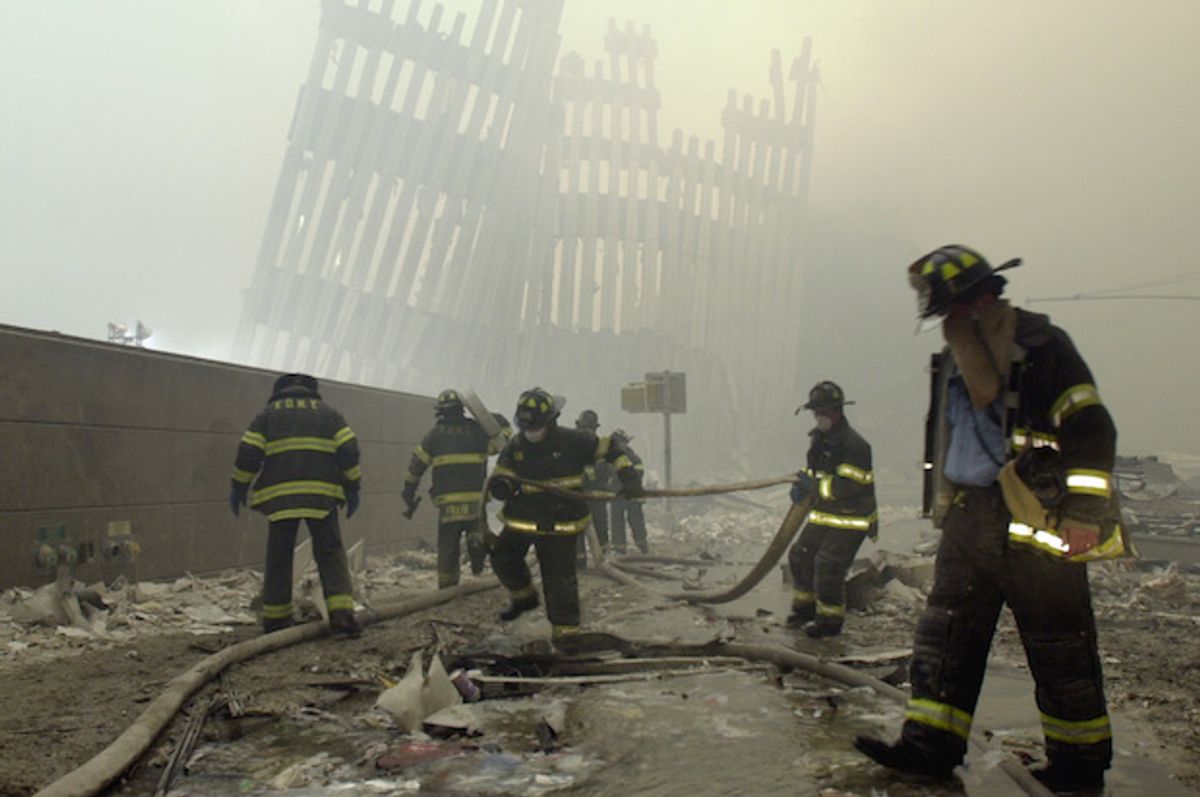 Firefighters at the World Trade Center, after the attacks on Sept. 11, 2001 (AP/Mark Lennihan)
--

"While in the United States, some of the September 11 hijackers were in contact with, and received support or assistance from, individuals who may be connected to the Saudi Government," states the previously redacted portion of the 2002 joint Congressional inquiry into the 9/11 attacks.

The redacted pages of the report were released on Friday, after nearly 14 years of pressure. The document was published on the website of the House Intelligence Committee.

Activists had persistently called on the U.S. to declassify this material, which actually consists of 29 pages, although it was long reported to be 28 pages. Even former members of the 9/11 commission asked the Obama administration to release the pages, saying they show Saudi support for the al-Qaeda attackers.

FBI and CIA documents disclosed that, while some of the Sept. 11 hijackers were in the U.S., they likely had contact with Saudi intelligence officers, the pages reveal.

The declassified document also shows that the intelligence community had information "indicating that individuals associated with the Saudi Government in the United States may have other ties to al-Qa'ida and other terrorist groups."

According to the report, however, "it was only after September 11 that the U.S. Government began to aggressively investigate this issue," given how oil-rich Saudi Arabia has been a close U.S. ally since the 1940s.

The FBI and CIA told the joint inquiry that "they are treating the Saudi issue seriously," the report says, but they still had "only a limited understanding of the Saudi Government's ties to terrorist elements."

"In the view of the Joint Inquiry, this gap in U.S. intelligence coverage is unacceptable," the report says, slamming the intelligence community and calling on it "to address this area of concern as aggressively and as quickly as possible."

The report notes that the FBI and CIA created a working group to study Saudi Arabia's ties to violent extremist groups.

Of the 19 Sept. 11 attackers, 15 were Saudi citizens. The Saudi monarchy has long staunchly denied involvement in the attacks.

Zacarias Moussaoui, a convicted 9/11 plotter, confessed in sworn testimony to U.S. authorities that members of the Saudi royal family had funded al-Qaeda before the attack. Saudi Arabia strongly denies this.

Former Sen. Bob Graham, who chaired the Senate Intelligence Committee during and after the 9/11 attacks, had for years insisted that the now declassified pages show Saudi involvement.

“There was an awful lot of participation by Saudi individuals in supporting the hijackers, and some of those people worked in the Saudi government,” former commission member John F. Lehman said in an interview published by The Guardian in May.

Internally, the U.S. and E.U. have long acknowledged Saudi Arabia's links to extremist groups, as Salon has previously reported.

“The United States is well aware about the financing network starting from Arab countries and reaching terrorists organisations through charitable institutions,” the European Parliament report noted, cited similar statements made in secret by the U.S. government.

“Saudi Arabia remains a critical financial support base for al-Qa’ida, the Taliban, LeT, and other terrorist groups,” said the U.S. government cable, which was released by whistle-blowing journalism organization WikiLeaks. (LeT is an acronym for Lashkar-e-Taiba, an extremist group based in South Asia that has its origins in U.S. support for Islamic extremists in Afghanistan in their war against the Soviet Union in the 1980s.)

The State Department wrote, “It has been an ongoing challenge to persuade Saudi officials to treat terrorist financing emanating from Saudi Arabia as a strategic priority.”

Saudi Arabia is a theocratic absolute monarchy that governs based on an extremist, sectarian strand of Islam known as Wahhabism. Wahhabism is ideologically very similar to the kind of Salafi extremism spread by violent groups like al-Qaeda and ISIS.

Many Muslims do not consider Wahhabism to be a legitimate form of Islam, arguing it is a distortion of the religion similar to the type of extreme, bigoted Christianity preached by fundamentalist groups like the Westboro Baptist Church or the Ku Klux Klan.

The Western-backed Saudi regime has also spent an estimated $100 billion in the past few decades exporting its extremist interpretation of Islam throughout the world, infusing its fundamentalist ideology in its ostensible charity work, funding madrasas, mosques and other institutions often in poor Muslim communities.

Despite this, the Saudi regime remains a close U.S. ally. In the past several years, the Obama administration has done more than $100 billion in arms deals with Saudi Arabia.

Widows of victims who died in the 9/11 attacks have long called on the U.S. to declassify the 29 pages of the report. In an op-ed in The New York Times in April, five wives of Sept. 11 victims blasted the close U.S.-Saudi relationship.

“We struggle to understand how financing the murder of 3,000 innocent people on 9/11 equates to being ‘closely allied with the United States,'” they wrote. “The Saudis should not be trusted, nor should they be considered our friends.”

The declassified "28 pages" can be read below: