The GOP is going back to the well, building at least the first 2 nights of the convention around stale attacks 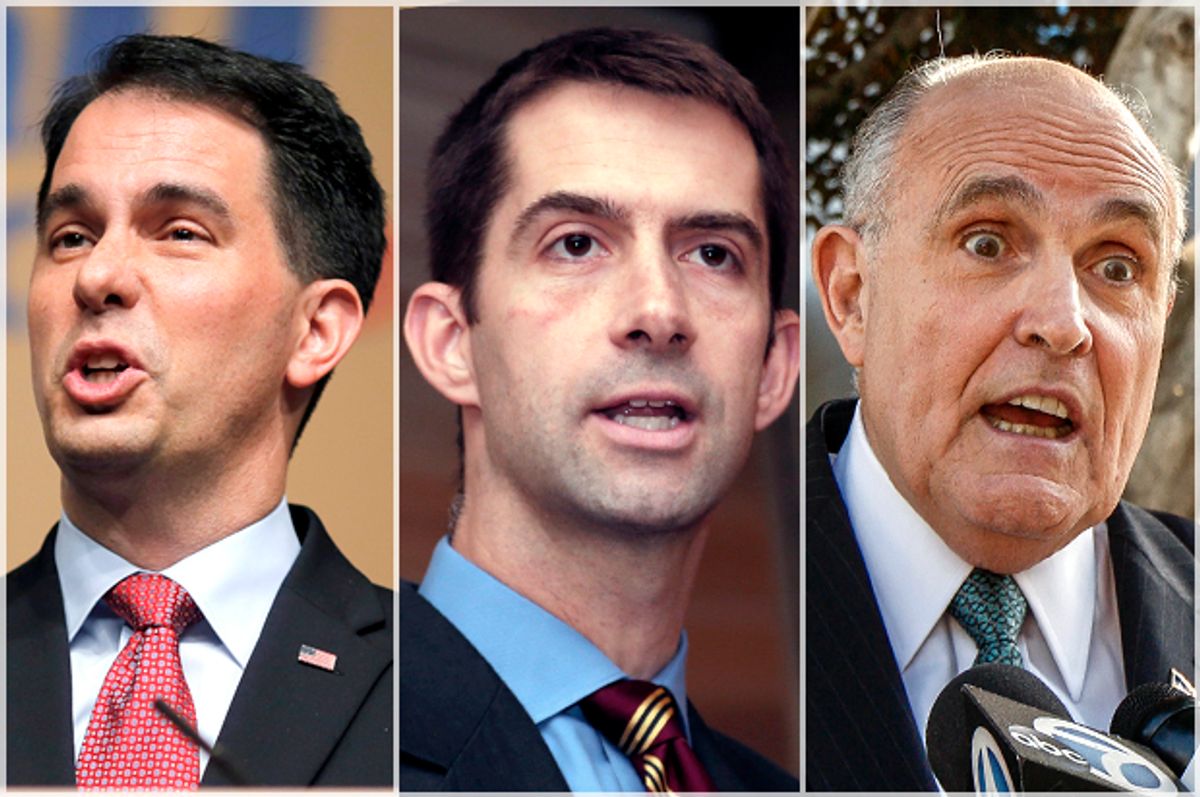 You have to hand it to the Republican Party. It never lets reality get in the way of a good time.

The central theme of the Republican National Convention in 2012 was a response to “You didn’t build that,” a line from a campaign speech by President Obama. In context, the line illustrated the non-controversial idea that no one in America truly starts a business with zero help of some sort. The business owner relies on taxpayers to pay for the infrastructure, to regulate (sort of) the banks from which he borrows money, the markets in which he operates, the schools that educate potential employees, and on and on.

Republicans misinterpreted this line, either deliberately or out of genuine stupidity, to imply that Obama was trashing the rugged individualism of American citizens. That he was suggesting they were all a bunch of socialists who had become successful thanks only to the government and not the truth that all the Republicans in the convention hall and across the country knew: that they built their business and homes and the entire country alone, with naught but the sweat of their own brow to fuel them.

Thus the 2012 RNC was a convention built not on the solid ideology of a political movement, but on the vaporous gas rising from the fever swamps of right-wing talk radio and blogs. It made no sense to anyone who did not spend all his time reading the #tcot hashtag on Twitter. It was a convention, and a campaign, premised on responding to something the president had never said, and doesn’t believe, in the first place.

Late Wednesday the schedule for this year’s RNC leaked out onto the Internet, and one thing was immediately clear. Having enjoyed such rousing success with its 2012 theme, the GOP is going back to the well, building at least the first two nights around chimeras that most of America will need a wingnut-to-English Google translator function to understand.

Night 1: The first night of the convention will have “a Benghazi focus.” Having gotten absolutely nowhere in four years of trying to make the tragic attack on an American consulate in Benghazi, Libya the worst scandal for an American administration since Teapot Dome, the GOP is going to…rehash the whole mishegas again, apparently. Sure, eight separate congressional investigations may have found that the rumors about the attack were garbage ginned up by the right (The stand-down order! No one knows where Obama was during the attack!). None of that will likely stop the GOP from parroting all these old attacks from the podium as if all of them aren’t staler than a loaf of bread buried at Pompeii.

Considering that facing down Trey Gowdy’s Select Committee on Benghazi during a grueling 11 hours of testimony was probably Hillary Clinton’s best moment of the last year, I’m not sure why the GOP would want to bring this all up again. But then, it’s not meant to appeal to the general public. It’s meant to rile up those conservatives who can hear the frequency at which the dog whistle is pitched.

Night 2: Some sort of presentation detailing Bill Clinton’s sexual history. Which has always been such a boon to Republicans, who threw it at the Big Dog during his two presidential runs and all through his administration.

Think about this. Back in 1998, Republicans in Congress impeached Bill Clinton for lying about a sexual affair with a White House interns. Three months later, the GOP got crushed in the midterm elections, at levels nearly unheard of for the party not occupying the White House in a midterm occurring during a president’s second term. Clinton’s approval rating hit a high point of 73 percent immediately afterwards, and was still above 60 percent when he left office two years later.

In other words, none of his sexual history, which got a pretty thorough airing back in the 1990s, seemed to affect how people felt about him. The public decided long ago, rightly or wrongly, that the women making some of the allegations were not credible.

Now Clinton’s wife is running for the presidency, and Republicans are going to try and stick her with his indiscretions, and probably exaggerate them to boot? Does this seem like a strategically sound idea? Especially since their own presidential candidate allegedly has some skeletons in his own closet in this area.

The dumbest part of this whole spectacle is that there is genuine room to criticize Hillary Clinton without sliding into the fantasy world of a Brad Thor thriller or a Washington, D.C.-themed bodice-ripping romance novel. One could criticize the way the Clinton Foundation conducted business over the last decade, particularly during her time running the State Department. One could argue that the Libya intervention, which she advocated for, was a terrible idea with catastrophic consequences, even without the attack on the Benghazi consulate. Pick something. Anything!

But no. The GOP, as is standard practice, will base its nominating convention not on the world as it is, but on the Clintons that exist in its addled and feverish collective consciousness, where everything seems to come right out of a bad direct-to-cable political thriller from the 1980s.

It would all be entertaining as hell if it wasn’t for the fact that this is our democracy we’re talking about. It’s almost enough to make me miss Clint Eastwood and his empty chair.