Don't fear the Poképocalypse: Pokémon Go is a fun phone game, not the end of life as we know it

Hands are wringing over the supposed dangers of Pokémon Go, but history suggests it's an overblown tech panic 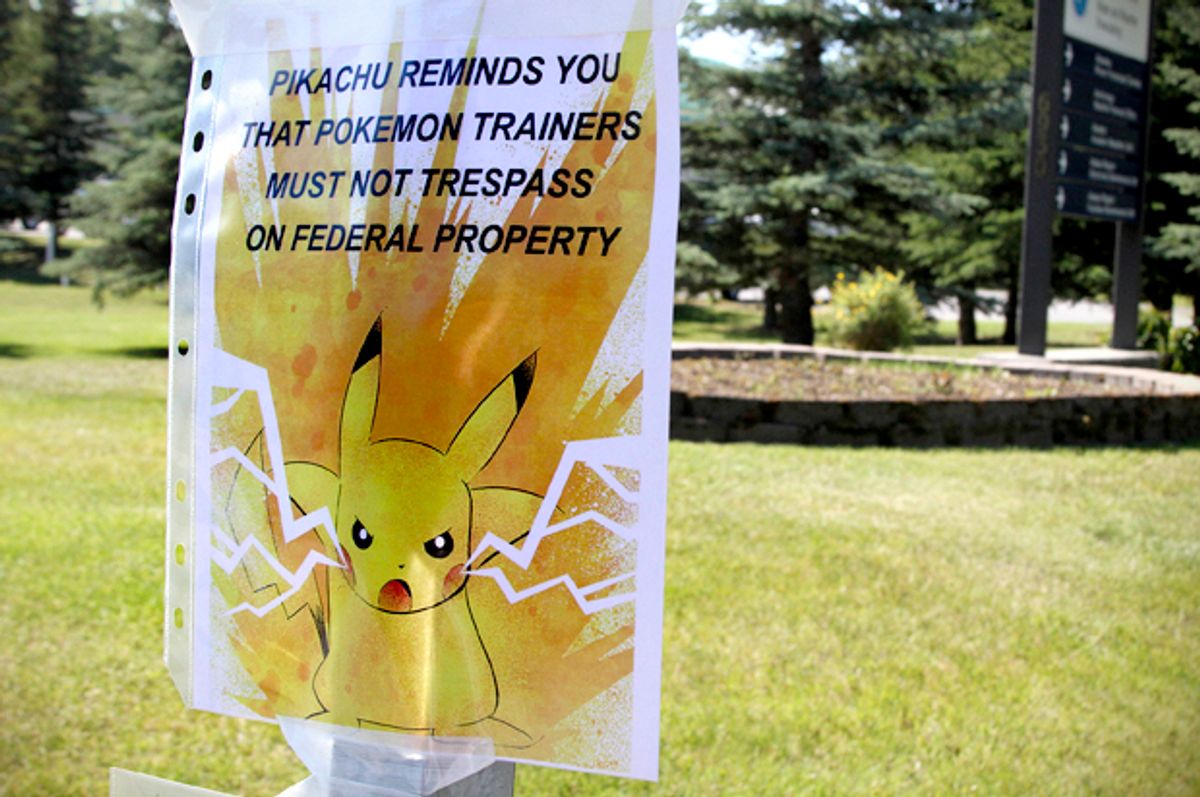 Pokémon Go is a new smartphone game that has become an instant international sensation. The game uses GPS technology to populate the real world with digital creatures called Pokemon, which can be seen through a player's phone screen, in a technology called "augmented reality" (AR). (Note to readers: That is not a real three-headed bird standing on my cat.)

The players collect these cartoon characters and then play combat games with them at virtual "gyms", which are also located digitally throughout the cities using modern mapping technology.

To players, it's a silly game, a way to while away the time and explore your city.

To many others, however, Pokémon Go is a portent of doom, a terrifying new technology that puts people, especially children, in mortal peril, while also signaling the destruction of life as we know it.

"Pokémon Go is a harbinger of things to come," Ezra Klein writes dramatically at Vox. "We are being warned. By Pikachu."

"The easy analogy here is drugs," Klein writes. "We know drugs are a cheap way for people unhappy, or unsatisfied, with this reality to escape to a (temporarily) more pleasurable one."

Many people are already augmenting their reality during their work commutes by listening to podcasts, radio or audiobooks, but sure, cartoon animals on your phone will be the tipping point where alleviating boredom turns into social catastrophe.

Klein is far from the only one intoning about the grave dangers of Pokémon Go. The news features a steady stream of overblown stories about players getting hurt, being robbed or being predated on by pedophiles. Police are reporting phone calls from busybodies who claim to believe that people goofing off on their phones is "suspicious activity." (911 is an important public service, people. Don't abuse it.)

"Concerns about social decay are nothing new — and they’re certainly not exclusive to video games," Norman Caruso, the host of "The Gaming Historian," explained. "Before people were wringing their hands over Pokémon Go, there was panic over the Harry Potter series. Before that, there were concerns about the way Elvis danced and before that, people worried about flapper-style haircuts."

There's an irony in this particular panic, IGN writer Kallie Plagge argued, as the typical "anti-technology sentiment is that young people are on their phones too often, not going outside and doing things," but with Pokémon Go, the panic is "about going outside and being with people."

"It was inevitable that Pokémon Go would bring out ironically viral neo-luddism, in the form of fake news stories and rumours about causing traffic accidents or paedophiles luring kids to their doom," feminist sociologist Katherine Cross argued. "Moral panic attending new technologies is inevitable, and if nothing else, proves that augmented reality has well and truly arrived."

An instructive historical example is the Dungeons & Dragons panic of the '80s. Nowadays, most people see the role-playing game, correctly, as just a fun, immersive game that encourages players to use their imaginations, but in the early '80s, the immersive aspects set off a nationwide panic.

"The 1980s were prime years for accusations that the game fostered demon worship and a belief in witchcraft and magic," Clyde Haberman notes in a historical piece for the New York Times. "Some religious figures cast it as corrupting enough to steer impressionable young players toward suicide and murder."

The concerns over D&D, a game where players sometimes act out their characters, echo Klein and others' fears about Pokémon Go: That the fantasy is too immersive, and that people who play with it are in danger of going so far in they can never come back.

This fear was stoked in the '80s by a movie called "Mazes and Monsters", a cautionary tale about  fantasy role-playing games. The main character, played by Tom Hanks (!) in his first major role, gets so caught up in the game that he starts to think that he is his D&D character. For some reason, this makes him think that the World Trade Center is not only a fictional set from D&D, but that he has to jump off it. No, the plot doesn't make much sense, but neither do these moral panics.

Caruso traced concerns over video games to 1976, when the game Death Race led to "psychological studies on the effects of video games," and into the '90s and 2000s, when games like DOOM and Mass Effect caused what-about-the children panics.

Caruso argues that "some concerns are valid", and those valid concerns have led to productive conversations about rating video games and the portrayal of women in them.

"Most of the time," however, Caruso adds, "panic over the latest video game is overblown. The hysteria dies down almost as quickly as it starts."

"This isn’t the first time that people have panicked over Pokémon," Caruso continues. "When it came out in the United States in 1998, parental groups said that it created a drug-like addiction. Religious groups said that it promoted Satanic activities."

"Is Pokémon Evil?" asked a headline in a November 1999 edition of Newsweek.

"Schools are banning it; parents worry about addictive behavior," the piece reads. Parents that journalist Malcolm Jones spoke with compared it to drugs. There was even a lawsuit against Nintendo that tried to argue the game was illegal gambling.

"Some also have expressed concerns that because the Pokemon figures include characters that suggest supernatural powers apart from God, they may provide children with an entree into witchcraft and the occult," the Washington Times reported in December 1999. One church reported a service where children relinquished their Pokemon cards, which were then burned.

The panic grew so large that the Vatican stepped in, issuing a press release that reassured parents that Pokémon has no "harmful moral side effects" and is instead "full of inventive imagination".

The same pattern is repeating itself, but there's no reason to panic about the panic.

"What is miraculous about Pokémon Go, compared to D&D back in the '80s, is that it's not a niche hobby," Cross explained.

"There is just as much press, if not more, celebrating Pokémon Go than there is stoking anxieties about it," she said, which she attributes to the fact that "'early adopters dramatically outnumber the hand wringers," demystifying the game and making it harder to scare people about it.

"Pokémon Go is nothing to fear," Caruso says. "It’s getting people outside, it’s bringing people together, and most importantly, it’s fun."