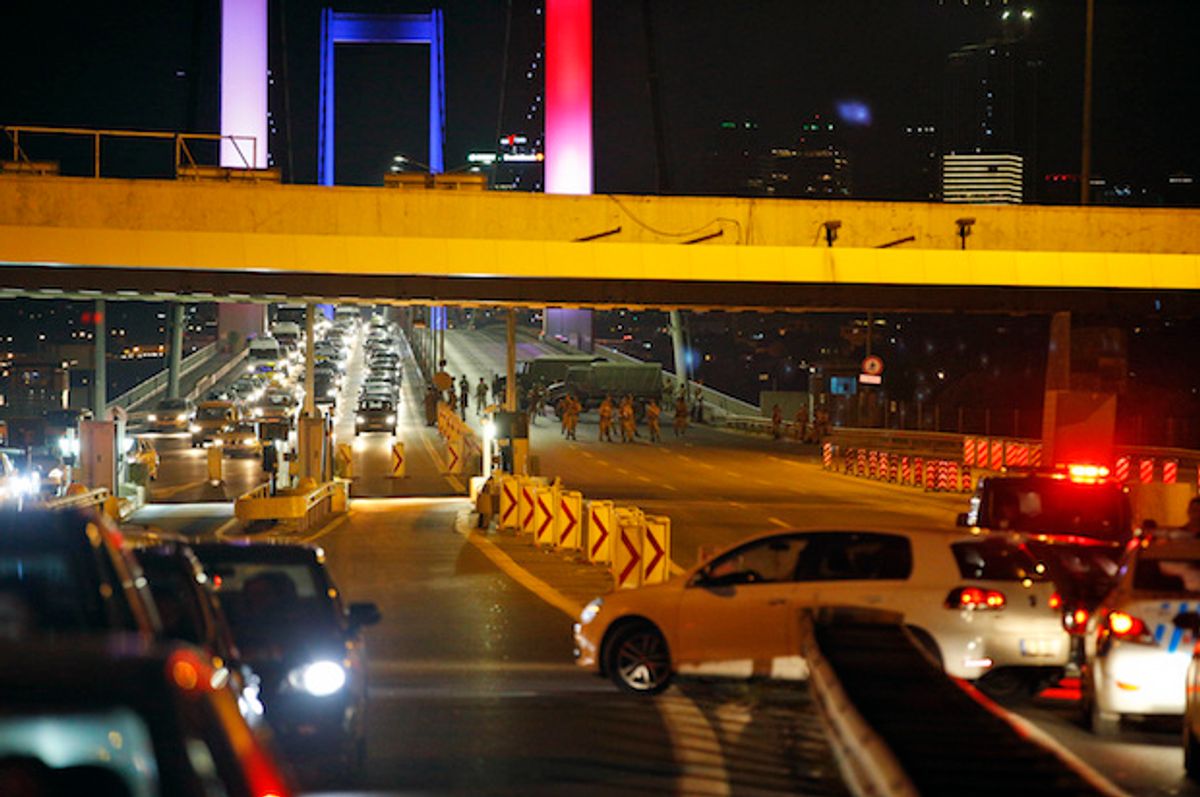 The coup leaders disseminated a statement on state broadcaster TRT on Friday night claiming they had taken over.

They condemned the Turkish government's erosion of democratic and secular rule of law and declared that the country is now being run by a “peace council” that will guarantee citizens' freedoms, regardless of religion, race or language.

“Turkish armed forces seized the rule of the country completely with the aim of reinstalling the constitutional order, democracy, human rights and freedoms, to make rule of law pervade again, to re-establish the ruined public order,” the military said, The New York Times reported.

“All the international agreements and promises are valid. We hope our good relations with all global countries goes on,” they added.

The military said it was temporarily instating a curfew and martial law.

President Recep Tayyip Erdogan escaped. His location is unknown. Erdogan reportedly tried to seek refuge in Germany, but was denied. He then allegedly sought refuge in London, although his plane was later reported to have landed in Istanbul.

Turkey is a NATO member and a close Western ally.

Erdogan has become increasingly authoritarian in recent years. He has imprisoned large numbers of critics and clamped down on journalism, closing anti-government newspapers and jailing reporters. Erdogan has repeatedly called human rights activists and journalists as "terrorists."

Opponents have described Erdogan, a right-wing Islamist leader, as an autocrat who hopes to restore the Ottoman empire, with himself as the sultan.

Western governments allied with Erdogan, such as the U.S., also condemned the coup. The U.S. said it did not recognize the military takeover. The White House released a statement urging "all parties in Turkey should support the democratically-elected government of Turkey, show restraint, and avoid any violence or bloodshed."

According to the state-run Anadolu Agency press agency, Turkey's chief of military staff was held hostage at the military headquarters in the capital Ankara. Other hostages were reportedly also being held.

There were numerous reports of violent attacks, including bomb blasts in the capital Ankara.

The Turkish parliament was allegedly bombed. According to state media Anadolu Agency, 12 people were wounded in this attack.

According to state-run Anadolu Agency, 17 policemen were also killed in attack a special operations headquarters.

A Turkish F-16 jet also reportedly shot down a helicopter used by the coup plotters.

Turkish soldiers blocked both of the Bosphorus bridges in Istanbul.

There were numerous of planes flying low in the capital.

A senior E.U. source told Reuters, "It looks like a relatively well orchestrated coup by a significant body of the military, not just a few colonels. They've got control of the airports and are expecting control over the TV station imminently. They control several strategic points in Istanbul."

The Turkish president and prime minister blamed the coup on the political movement led by opponent Fethullah Gulen, although is no evidence linking Gulen or Gulenists to the coup. Erdogan's administration has often claimed its opponents are working for Gulen.

Gulen's group the Alliance for Shared Values released a statement calling statement by Erdogan and his supporters "highly irresponsible."

Erdogan called on Turkish citizens to flood the streets in protest of the coup.

Prime Minister Binali Yildirim said in a television broadcast, “Some people illegally undertook an illegal action outside of the chain of command,” The New York Times reported.

“The government elected by the people remains in charge. This government will only go when the people say so,” the prime minister insisted.

All flights from Istanbul's Ataturk airport have been cancelled.

It is unclear what forces within the military are behind the coup.

The coup leaders say they are secular and pro-democratic. And their statement promising to protect the freedom of citizens of different religions, races and languages suggests they may not be far-right forces or Islamists.

For months, Erdogan has also waged a brutal war on Kurdish militants who hope to create an independent Kurdish state. The Turkish military has killed hundreds of Kurdish civilians and displaced hundreds of thousand.

At the same time, the hyper-nationalist far-right has been on the rise in Turkey, which opposes both Erdogan and the Kurds.