The mystique of Daniel Johnston: "There’s something ancient in all of this — the notion of the eccentric"

Salon talks to Scott McClanahan, author of a new graphic novel about the outsider musician and artist 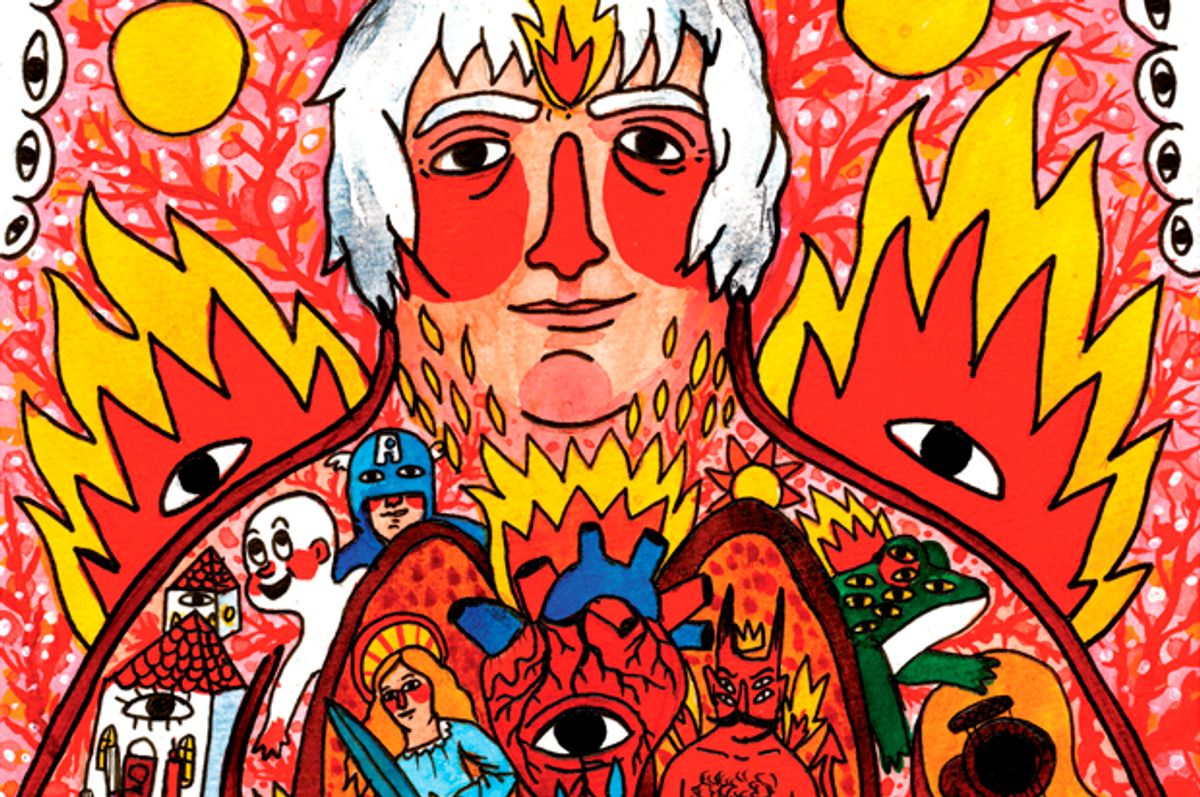 If there’s a cultural ambassador to Appalachia at this moment, it very well may be West Virginian writer Scott McClanahan. “Crapalachia,” McClanahan’s captivating pseudo-memoir partially based on his own childhood, encapsulates what it’s like to grow up in the not-quite-deep South of America. But McClanahan has been careful to underscore that his portrayals of Appalachia and West Virginia have always been his own takes on the region.

Following praise from both establishment literary figures as well as those on the outskirts of the mainstream publishing world, McClanahan is in high demand. Indeed, his long-anticipated work, “The Sarah Book,” has been dubbed “the ‘Chinese Democracy’ of indie lit” by his own publisher at Tyrant Books, Giancarlo DiTrapano.

McClanahan’s latest work, “The Incantations of Daniel Johnston,” out next week from Two Dollar Radio, is a graphic novel about the life of Daniel Johnston, the influential outsider rock musician and artist also from West Virginia. Like the accompanying images provided by Spanish artist Ricardo Cavolo, McClanahan's prose is intoxicating, taking care to detail magnificent anecdotes from Johnston’s life while simultaneously shedding light on ineffable notions like culture, psychology and fame.

Salon spoke with McClanahan to discuss his first foray into writing for a graphic novel, how he addressed his subject’s infamous mental illness and why he prefers small, independent presses to release his writing.

“The Incantations of Daniel Johnston” is compelling for a number of reasons, but I find it fascinating that you were a hired gun for the project. Ricardo Cavolo had already published a version of the book in Spain and then Two Dollar Radio, your publisher, asked you to write the prose for the American release.

It’s like prostitution almost, right? [Laughs.] It’s been something completely different for me. There’s something kind of freeing about it in some way. I’ve always made these very private, personal books with private, personal stories for an audience of a few people. I don’t know if I feel like I’m at the end of that, but you use up your material after a period of time, writing personally about yourself.

I’ve always been interested in biography. Biography is fascinating whether you’re talking about Plutarch or one of my favorite writers, like James Boswell’s "The Life of Samuel Johnson." It’s almost like working with a ventriloquist’s dummy. You use another person as a way to continue talking about yourself.

There’s an element of it that is kind of freeing in that way. I want to do more of it in maybe a more traditional, biographical format more so than a weird art book. It’s been nice.

There’s another layer of complexity to this because you haven’t met or spoken with either Johnston or Cavolo. Is there a bit of anxiety over whether or not you’re satisfying these other individuals that are involved in the production of this work?

I always remember Proust: All personality is a social construction. I believe in that to a certain extent. You can think you have a personality, but in reality, it’s people’s ideas of who you are that create the person that you think you are. Or, that great Robert Burns poem, “To A Louse.” The woman comes into a Presbyterian Church and she’s all dressed to the nines, but what she doesn’t realize is that the person sitting behind her can see the lice in her hair. What would that do to us, to perceive ourselves the way others see us? That would almost destroy us.

With the Daniel Johnston I created, I wanted to it make my Daniel Johnston. At the end of the day, that’s me. You have friends that are probably versions of your own self that you accept into your own life and psyche. They’re probably much different with someone else and if you saw them with their other group of friends, you wouldn’t know them.

I think the book’s kind of about that -- the mysteries of who we are and the way people label us or construct us or create us.

Johnston’s troubles with mental illness are almost unavoidable and the book addresses this head on. But the topic of mental illness is often deployed as a marketing device in some way. I’m struck by your ability to address Johnston’s problems in a way that doesn’t feel like you’re trying to aggrandize his mental illness to sell books.

I guess it’s an old idea. I mention English Romantic poets in the book. We live in an age of post-New Criticism where we try to separate the life of the artist from the art. But would you be reading Shelley or Byron if we didn’t have so many great, fucking cool-ass anecdotes about them and their lives? Maybe not.

It’s the same question of Hank Williams. Is Hank Williams a genius who was an alcoholic or is it because he felt life differently and in a darker, more emotional level? Is that core of him what allowed him to produce those songs?

I don’t know if we’ll ever really answer that. Part of the thing about Johnston that I love about him is the life. It’s the anecdotes. He takes the plane down that his father is piloting. That is compelling, even if he wasn’t this amazing songwriter.

There’s something really touchy about these issues -- especially mental illness. You don’t want to romanticize it. I hope that I didn’t romanticize it. But I guess it gets back to that Proust quote. Psychology is there to normalize us within some consumerist, capitalist society so that you can work a job, start a family and buy a bunch of shit that you don’t need.

There’s also something ancient in all of this -- the notion of the eccentric. We’ve almost destroyed that notion of someone that is trapped in their own house. Now, we say that person is agoraphobic. In the eighteenth century, we called them eccentric. We’ve replaced old ideas about the brain with new ideas. They’re the same concept, we’ve just changed the terminology.

This is not to say that these aren’t serious issues and people aren’t helped every day by modern psychology and medication. God bless that stuff. But I hate when we’re condescending toward visions or hallucinations without realizing that there’s some truth in them. I think there’s a power in the idea of an individual behaving as an individual.

It’s like the Thelonious Monk story. He comes back from Europe and his suitcase is full of pop bottles. His suitcase is full of them because he’s been drinking soda pop in Europe and he wants to make sure he gets his five cents when he returns them for recycling. There’s still some logic and there’s still some beauty in that anecdote that tells us something about us.

You’re using very real examples, but it gets at this notion that the function of literature is pedagogical.

Yeah, for sure. Things are so much more complicated than anything you can get on the surface. Just look at Weston State Mental Hospital, right here in West Virginia. I grew up with jokes about that. “We’re gonna send mom to Weston!” I had an uncle that spent quite a bit of time there. My roommate in college, his uncle spent a decade there.

We think, on the surface, of mental institutions as these horribly repressive, “One Flew Over the Cuckoo’s Nest” places, but at the same time, this was the home of these people. These were individuals who were prisoners of their time. You get the same idea when you think of lobotomy, this evil concept. There was a part of people that thought they were doing some sort of good.

It’s such a complex and multifaceted issue.

You seem to take a lot of stock in the home for your books. How important is the company you work with for your books to your process?

I think it’s been incredibly important. It’s hard in some ways to remove myself from it because I’m putting out more books with Giancarlo DiTrapano at Tyrant Books in the future, including a quote-marks-around-it traditional novel here in the next year or two or three or four.

It’s difficult to separate friendships now. With Eric and Eliza [Obenauf] at Two Dollar Radio and Giancarlo at Tyrant, it’s maybe past the point of friendship now. I feel incredibly close. It’s hard to figure out now what will be or what was some sort of ideology or whatever that I had about independent press.

I’ve just been left alone for the most part. I think that’s what you want and need to a certain extent.

It seems very punk rock from my standpoint.

Yeah, yeah. I’m at the age now that I’ve been doing internet literature since 2008. I was keeping up with it a little before then, but I’m seeing my contemporaries that I knew from 2008 who go on and publish with a big house or a big press. Some of them work out well, it appears. And some of them don’t work out so well. I mean, they might get a crappy looking cover, right? And they might wind up getting lost in the shuffle of the other twenty books that the big house is putting out that month.

The books that I love, for the most part, have always come from the independent presses. I’m thinking of the Evergreen Review, New Direction and Olympia Press. These were mom-and-pop amateur operations. And thank God they were. This isn’t to say that a big press is bad. There are editors like Emily Bell [at Farrar, Straus and Giroux] that feel like they belong at an independent press.

Maybe it’s a personality thing. I don’t know if I could play the game of big press. I have an agent, but I’m sure she just thinks that I’m stupid. Maybe I am. But there’s something holy about my stupidity.

It’s similar to what you said about friends. Maybe the mode of delivery of your work is just an extension of yourself.

Yeah. You can have two or three or four emotions at the same time. Is there a part of me that would want to be a part of a big press and apply for fellowships and go to parties where all of the guys are dressed like they are in GQ and everyone is drinking champagne out of really tall glasses?

I’ve heard Jarvis Cocker talk about that, like the world is a kind of hotel in terms of what you’re trying to achieve. You want to be invited. “Come in here! This is the celebrity room. There are only five people invited!” And you want to be one of those five people that are invited. I’ve said that maybe I’m stupid. But maybe I’m smart enough to know that that room, once you get in it, stinks. [Laughs.]

I want acceptance. I do. But maybe my personality is just too orney to ever get it.