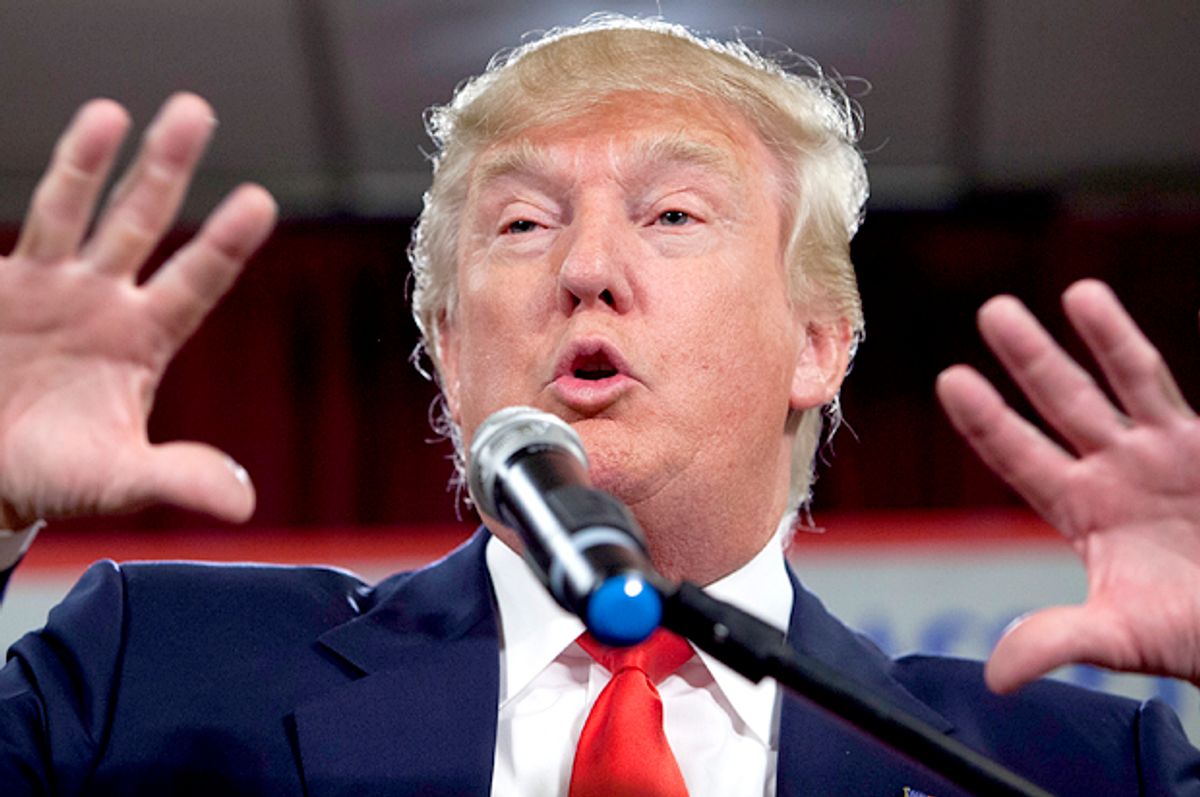 More than a full year after Donald Trump first threw his hat in the ring, the political establishment still doesn't know what to make of him. Sure he's a performer who ad-libs a lot, but underlying the performance there's a lot more consistency than the establishment is willing to admit, a body of interconnected, sometimes weaponized ideas that have been taking shape on the hard right since at least the late 1980s. Taking the lead in explaining that consistency and its consequences is researcher Bruce Wilson, co-founder of the influential Talk To Action blog.

Wilson was the first to uncover Sarah Palin's network of religious extremist associations, within days of John McCain naming her as his running mate, providing the first coherent body of evidence of the sort of candidate she would turn out to be. Given that track record, it's not surprising that Wilson is once again a step ahead of the pack in bringing hidden connections to light to help make sense of things that are staring all of us in the face.

Salon interviewed Wilson by email; the transcript has been edited for clarity and length.

The corporate media haven't been able to make much sense of Donald Trump. One thing they've said is that he's non-ideological, or at least at odds with "true conservatives." But you've pointed he has strong affinities for paleoconservative ideas, particularly as laid out in the 2009 book, "The Next Conservatism" by Paul Weyrich and William Lind — a copy of which Lind recently gave to Trump.  You wrote, "Trump could have derived most of his 2016 primary positions from a two-hour session with Lind’s and Weyrich’s book." Could you elaborate?

For example, an eleven-minute pro-Trump infomercial from August 2015, "'On Point' With Sarah Palin and Donald Trump" — which now has over 3,800,000 views — begins with a mini-Trump speech that could have been ghostwritten by William Lind:

I don't like what I see happening to America. The infrastructure of our country is a laughingstock all over the world. Our airports, our bridges, our roadways — it's falling apart. It's terrible thing to see. Our politicians are all talk, no action. Millions of people are flowing across our Southern border. We've got to build a real wall... Let's make America great again.

The Lind/Weyrich cultural Marxism/PC/multiculturalism conspiracy theory is radically anti-immigrant. Lind and Weyrich have especially targeted Muslim immigration. According to Dr. James Scaminaci, they were targeting Islam years before the 9-11 terrorist attacks.

Indeed, one plot line in William Lind's 2014 race-war novel "Victoria" is the invasion of Boston by Muslim troops under the auspices of the UN. At the close of the novel, the victorious white Christian insurgents prepare to launch a 10th Crusade against Islam.

There's been a lot said about "why Trump is not a true conservative," but what does Lind have to say about the style of "conservatives" who make these sorts of claims?

Lind says they're intellectually vacuous, and that the current conservatism is "rubbish" and filled with "'I've got mine' smugness."  He says Republicans (along with Democrats) have aided the deindustrialization of America and the dispossession of the middle class, wasted the national treasure on idiotic wars (such as in Iraq) and enabled the dramatic expansion of repressive federal power.

Most progressives would tend to agree.

According to Lind, "cultural Marxism" is Marxism translated from economic into cultural terms (whatever that's supposed to mean.) Lind's narrative goes like this — that after the initial success of the Russian Revolution, the Bolsheviks got bogged down and failed to take other countries — such as Germany. So, a small school of Jewish Marxist intellectuals, the Frankfurt School, came up with a neat answer — the revolution hadn't spread because the culture wasn't receptive enough. First, you had to change the culture.

You had to destroy conventional morality and religion — especially Christianity — and undermine other existing cultural institutions. Above all, you had to promote "political correctness", the slavish privileging of the feelings of just about any identity group except white European-American Christians (especially male) and you had to push multiculturalism, the notion that all cultures are all equally valid.  Both of those serve to demolish existing standards, so nobody — or everybody — is right and baseline truth no longer exists.

And you had to bring in a flood of immigrants so fast that they couldn't properly assimilate — especially if they came from traditions very distinct from the American norm. All these things would destroy national cohesion and, eventually, the centrifugal forces would shatter the nation.

Then, the Marxists could just waltz in and take over, banish the dissenters to gulags and impose godless collectivism. Of course, if the end goal was to undermine capitalism, well — it's obviously so far been an absurd failure.

Like the Protocols, Lind's cultural Marxism idea purports to expose a secret Jewish plan for world domination. The interesting thing is that Lind's alleged conspiracy has a real counterpart on the American religious right and Lind's part of it.

How has the term been spread throughout the right and been picked up by some rather unsavory types?

I've been tracking that and there have been so many vectors that it's startling. One was Paul Weyrich, who spread the idea through his 1999 open letter to conservatives. Lind probably knew pretty much anybody among religious and social conservatives worth knowing and so the "cultural Marxism" conspiracy theory spread through elite circles. Weyrich's letter was republished in Christianity Today.

There was the 2004 Free Congress Foundation mini-book, "Political Correctness - A Short History of an Ideology," edited by Lind (who wrote the first chapter.) Norwegian terrorist Anders Behring Breivik plagiarized that book almost unchanged in his 1500-plus page political manifesto, which uses the terms "cultural Marxism" and "cultural Marxist" over 600 times. The conspiracy theory was Breivik's core inspirational idea.

Then, there are the best-selling books of paleocons such as Pat Buchanan. William Lind was one of the five advisers Buchanan listed as having played significant roles in the genesis of his 2001 book, "The Death of The West." Buchanan's book contains a chapter titled "The Frankfurt School Comes To America" which closely tracks Lind's description of the genesis of the grand "cultural Marxism" conspiracy.

Another major aspect of Lind's thought is "fourth generation warfare." He introduced the concept in 1989 in predominantly military terms, as a continuation of a process of how warfare had changed from the time of Napoleon to now. What was it about, initially? How does it break down traditional distinctions between war/peace and combatant/noncombatant?

Lind anticipated the coming of an age of "non-trinitarian" warfare. In Clausewitz' famous construction on war, there's the government, the army and the population. Each have distinctly different functions, and there's little to no overlap.  The army does the fighting, the government and population do not. In 4G warfare those categories you mention — war/peace, combatant/non-combatant — disappear.

How did it develop to synergize with his "political correctness"/"multiculturalism" conspiracism?

While the two ideas might seem unconnected, they appear to have developed in Lind's mind more or less simultaneously. In a paper on Fourth Generation Warfare, published in the December 1994 issue of the Marine Corps Gazette, William Lind explicitly laid out the "cultural Marxism" conspiracy theory, as an ongoing 4GW attack on the nation:

Starting in the mid-1960s, we have thrown away the values, morals, and standards that define traditional Western culture. In part, this has been driven by cultural radicals, people who hate our Judeo-Christian culture. Dominant in the elite, especially in the universities, the media, and the entertainment industry (now the most powerful force in our culture and a source of endless degradation), the cultural radicals have successfully pushed an agenda of moral relativism, militant secularism, and sexual and social "liberation." This agenda has slowly codified into a new ideology. usually known as "multiculturalism" or "political correctness," that is in essence Marxism translated from economic into social and cultural terms.

This new, cultural Marxism has had remarkable success in discrediting America's common culture and substituting for it cultural fragmentation based on ethnic groups, gender, sexual identity, and class. If this trend continues, Americans will increasingly find they have less in common with each other as Americans. National identity will weaken. Other, mutually hostile identities will strengthen, until the nation comes apart: region vs. region, minority vs. minority, and gang vs. gang. When one nation comes apart at its cultural seams, eventually it turns on itself and fights.

This is more subtle than it appears — it's arguable that the 1994 paper was itself an exercise in 4GW in which Lind revealed to readers, presumably, for the most part, patriotic Marines, the existence of a plot to destroy the nation and identified the enemies behind the plot, who were for the most part associated with the American left.

But there's yet another aspect to this Fourth Dimensional chess game — in his subsequent writings, William S. Lind has proposed a new domestic security regime in which local militias, perhaps operating under county sheriffs, would deter crime and terrorism. Now a number of anti-federal sheriffs are already networked with militias and other far-right anti-federal groups.

The sort of racial and ethnic hatreds stoked by paleocons and related political tendencies feed the centrifugal tendencies that could erupt into mass violence and tear the nation apart — an outcome that would resemble the scenario detailed in William Lind's 2014 race-war novel "Victoria," in which militias topple the government and carry out ethnic cleansing of African-Americans and other minorities.

Lind's enthusiasm for such a horrific civil war shines through in "Victoria."

Another aspect of Trump's candidacy the media hasn't handled well is his relationship with white nationalists and others normally regarded as "beyond the pale," whom the media usually ignores. But paleoconservatism provides a big tent for them, and Lind has played a key role in raising that tent. So I'd like to conclude by asking you to address two sides of the same coin. First, how has Trump been able to take advantage of the groundwork that Lind has helped lay?

With regards to the "cultural Marxism" conspiracy theory, every time Donald Trump heaps scorn on "political correctness," whether by intent or not, he's telling people who have encountered Lind's conspiracy theory that he's on board with the program — he knows who the enemies are.

As far as Trump's campaign platform goes, he appears to be capitalizing on the ideas of some of America's most astute right-wing thinkers, Weyrich and Lind, who have crafted a new breed of conservatism with far broader populist appeal than the increasingly discredited trickle-down economics, big government, interventionist, corporate capitalism-beholden style of conservatism that's become dominant in the years since Reagan.

Think of the power of the platform. Prior to the election, it was taken for granted that funding from plutocratic billionaires — the Kochs, Adelson, and so on — would shape the GOP primary outcome. Now, Trump has unique talents that set him apart, sure — but without the paleocon program, Trump would be just another Republican in the pack.

On the flip side, how have Lind, his followers and those he's influenced or facilitated been able to take advantage of Trump's candidacy?

We don't know yet, at least in demonstrable ways. But Trump has clearly emboldened racists. Over the course of Spring 2016, Donald Trump and his son have met significant leaders connected to that 4GW network, not just Lind.

The very fact that Trump has made these sorts of connections, especially to Lind, the author of a race-war novel like "The Turner Diaries," a man who seems to have inspired a major 2011 act of terrorism and suggested he's inspired al-Qaeda as well, is jaw dropping.