"Beautiful is a woman being her true self": Why I declined reconstruction after my double mastectomy

Five years after my surgery, I still feel like a whole woman despite not conforming to society's beauty standards 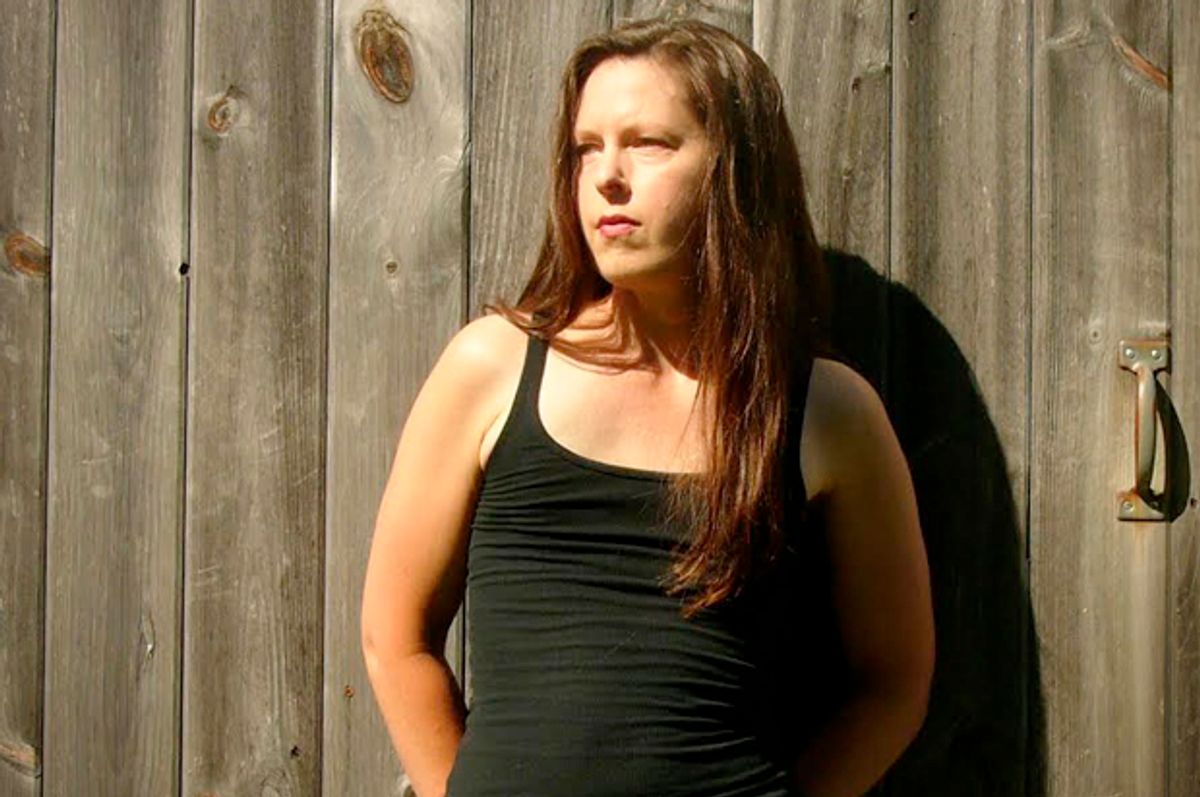 A photo of the author (Theo Congdon)
--

Early on the morning of my double mastectomy, I wash my chest with a noxious-smelling pink soap that kills germs before surgery. In the shower I scrub, rinse and repeat, dawdling under the hot water, not quite ready to face this day. My fingertips trace the lump in my left breast for the millionth time since discovering it three months ago. On my doctor’s recommendation I’ve been doing chemo to shrink the tumor before surgery. Four rounds so far, but the lump doesn’t feel much smaller to me.

Frankly, I’m terrified about what the mastectomy is going to reveal. According to scans, my organs are free of cancer, but it has spread to the lymph nodes in my armpit. Today we’ll find out how many, and whether or not my ovaries are clear. They’re also being removed because, to my shock, I’ve tested positive for a BRCA2 mutation. This faulty gene is what caused me to develop breast cancer and puts me at increased risk for ovarian cancer.

All week I’ve had a recurring dream that I’m in my car, driving down a steep hill, quickly picking up speed, and when I go to apply the brakes, there’s no pedal. I always wake stomping my foot and yelling. My husband, Theo, holds me until I calm down, whispering reassuring words in my ear even though he’s scared shitless too.

When the water runs cold, I reluctantly step out of the shower, wrap myself in a towel and tiptoe into the bedroom so I don’t wake Theo. It’s not dawn yet but he’s already up, dressed and ready to head to the hospital. He stands in front of me wearing a sad, worried expression. We both sigh. I unwrap the towel.

“Well, it’s been real,” he tells my boobs. I laugh. Eighteen years together and we’ve cracked each other up through everything, even this. Even things worse than this.

“I’ve had a lot of fun with you two,” he says. Then his voice cracks and his face crumples. He kneels on the floor and gently kisses each of my breasts. Kisses them goodbye.

The women’s surgery center at the hospital is decorated like a spa with soft lighting, plush white robes and stacks of expensive magazines on every table. As if I’m here for a mud bath rather than the removal of major body parts. Actually, I appreciate that whoever designed the space tried to make it comfortable, to take the edge off the terror of this experience. I sit in my robe on a deep couch next to Theo, waiting for the surgeon and reminding myself to breathe.

Months ago, at my first pre-op meeting with Dr. C, he launched into a spiel about the various options available for reconstruction after my mastectomy.

I heard him out and thanked him for the information. “But I’m pretty sure I don’t want reconstruction,” I said.

“Oh.” He raised his eyebrows in surprise. “May I ask why?”

I explained to him that, much as I like my breasts, they aren’t really integral to my sense of self or womanhood. I’ve never gotten a lot of attention for my rack, so it’s not a feeling I’ll miss. I do, however, know how it feels to get pleasure from my breasts and that’s something no reconstructive surgery can restore. For all the upbeat talk about new-and-improved tits after a mastectomy, the fact is that those big perky numbers will have little or no sensation.

“It’s just not worth it to me,” I told Dr. C then. “The extra surgeries, the risk of infection. I’ve been through enough with the chemo, and soon I’ll be in menopause from having my ovaries removed, and then radiation … My gut is telling me to let my body heal and just … be what it is.”

Dr. C listened respectfully. He didn’t object or pressure me into getting reconstruction the way I’ve heard some surgeons do. “It’s your decision,” he said. “But remember, you can always change your mind down the road."

Since then, every single doctor I’ve seen – oncologist, gynecologist, radiation specialist – has echoed my surgeon’s assurance that I can have implants put in later. Later, as in, after I’ve gotten over the trauma of a Stage III breast cancer diagnosis, of testing positive for a BRCA mutation even though there is no strong history of cancer in my family. These doctors all assume I will want implants once I’ve finished treatment and am ready to “get back to normal.”

But there is no normal anymore. Given the aggressiveness of my tumors, I’m not sure I’ll be here five years from now. Time is precious. I don’t want to spend any more of it than necessary in surgery, or recovering from surgery, or sitting in a waiting room like this one, no matter how comfortably decorated. I have other shit to do. Finish the book I’ve been working on for the last decade. Get out of New York, move to Maine with Theo and plant the gardens I’ve always dreamed of. Allow my body to get strong and expend its energy on keeping stray cancer cells at bay.

Finally Dr. C breezes into the waiting room, bright eyed and freshly shaved. He perches on the coffee table in front of Theo and me to go over the details of the procedure again.

When he’s finished, I clear my throat and say, “Just so you know, I’m not planning to get implants down the line. I wanted to mention it in case that makes any difference in how you do things today.”

“It does, actually. Normally I would leave extra skin so there’s room for tissue expanders to be inserted.”

Now, five years later, luckily cancer-free and back to “normal,” I am still just as sure about my decision to go flat. Thanks to Dr C’s handiwork, the scars are hardly visible. It’s as if my breasts have been erased. Sex without them is different, but I imagine sex would also be different with two numb implants on my chest. I’m glad that I didn’t saddle my body with foreign objects in order to conform to our society’s current porn-ified standard of beauty. To me, what’s beautiful is a woman being her true self. I happen to be a woman without breasts or ovaries, and anyone who doesn’t like it can lump it, so to speak. Of course, that’s easy for me to say. I have a husband who accepts me as-is and didn’t want me to get implants. I like to think I would’ve made the same decision even if I were single, but I’m not sure that’s true. Dating without boobs seems like a daunting proposition.

My thought process might also have been different had I tested BRCA2+ before cancer struck and gotten a prophylactic mastectomy instead. Maybe if my body hadn’t been ravaged by chemo I would’ve been more receptive to reconstructive surgery, more willing to risk the possible complications, like infections and loss of strength and mobility in my upper body. If I were in the same position as, say, Angelina Jolie.

But I’m no Angelina Jolie. I don’t look like her or live like her. As a professional gardener in rural Maine, it’s more important that I be able to wheelbarrow a load of compost up a hill than look good in a low-cut gown. Whenever I do dress up, I just stick falsies in a bra or else wear pants so crazy and colorful no one notices my flat chest.

One of my friends from the chemo infusion room had implants that leaked into her chest and caused a major infection that required multiple trips under the knife.

“The only reason I got these is because everyone said I’d be happier with them,” she told me. “But I’m not fucking happy.” She ended up having the implants removed and was glad she did. Another friend from chemo loves her implants and feels they helped her reclaim her life after cancer treatment. To each her own.

With the recent rise in BRCA testing and early cancer detection, more women than ever are facing the reconstruction dilemma. It would be great if we could all make this decision based on our own gut instincts about what’s best for our bodies and lifestyles, to not be so affected by the opinions of other people – whether pushy doctors, tit-man husbands, or our breast-obsessed society at large.

Easier said than done, though. A few years after my mastectomy, I went in for a routine follow-up with Dr. C and mentioned how a female doctor had recently asked if I was “ready for reconstruction” yet.

“She seemed skeptical when I told her I’m fine without implants,” I said. “But it’s true. I don’t feel maimed or disfigured at all. I was a whole self before I grew boobs and I’m a whole self now that they’re gone.”

“Plus you’re feminine as hell,” Dr. C chimed in.

I blushed at that. May have even giggled. That afternoon I walked out of his office with extra pep in my step, feeling more attractive than I had since, well, to be perfectly honest, since my boobs were cut off.

I’m not even sure what the doctor meant when he called me “feminine.” Maybe just that, since finishing chemo, my hair had finally grown past my shoulders, or maybe he was just trying to be nice. I don’t know, but I thought a lot about his comment over the following months, always with a flush of pleasure. Because a man other than my husband had approved of my body, had deemed it womanly enough. And his opinion meant more to me than I like to admit.

Kerri Sandberg’s essays have appeared in the New York Times, the Boston Globe and xoJane. She has recently completed a memoir and is working on a novel