The servants behind Hillary's server: Meet the staffers tied up in the email debacle

Clinton's computer club: Her use of a private email server was a true team operation 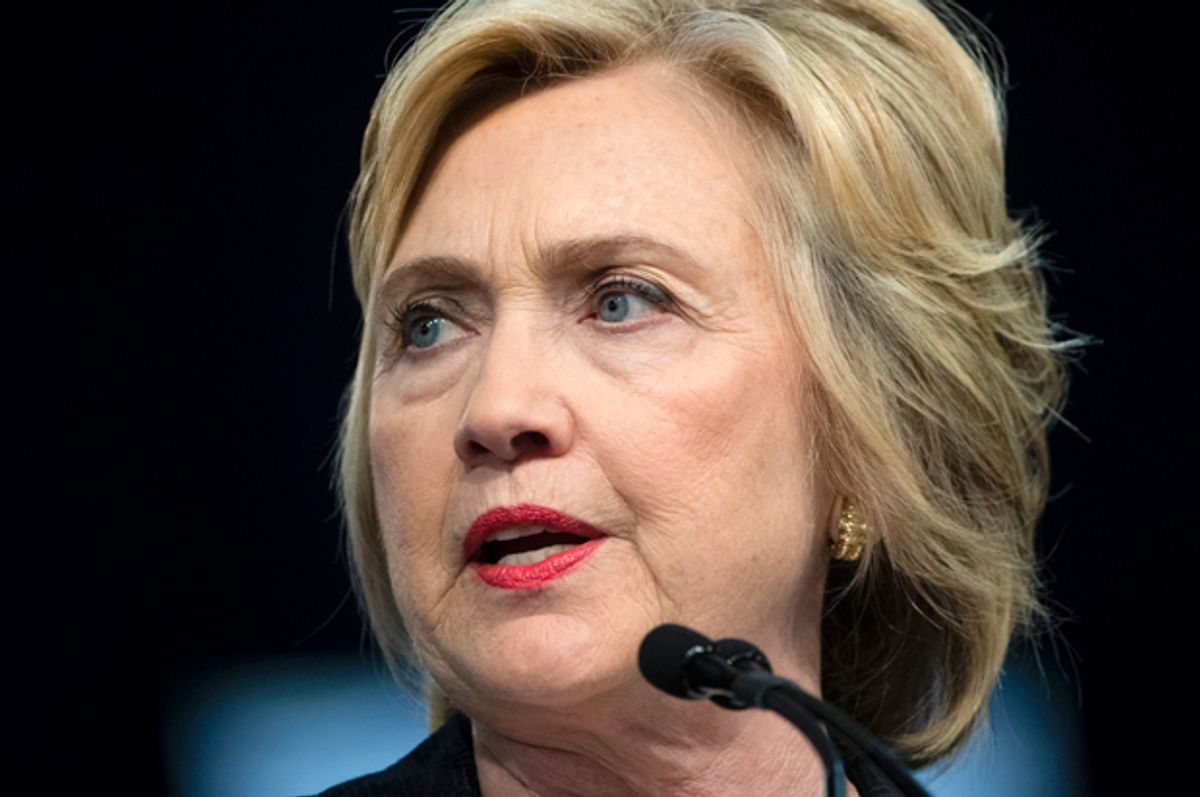 Before Hillary Clinton became secretary of state, an aide to Bill Clinton set up a private email server in a “telephone closet” in the basement of his and Hillary’s suburban New York home. Mrs. Clinton says she used email from that server out of “convenience,” as she wanted to use her personal BlackBerry smartphone for all messages. Some hypothesize that she did it to shield herself from Freedom of Information Act requests, which would only apply to emails sent to or from someone using a government email address.

Whatever the cause, Clinton used a risky private email server that an upper-level IT director allowed and a number of her staffers and aides interacted with. Sometimes Clinton’s messages to employees using government addresses were held up, or didn’t go through at all. The server had to be shut down several times because of hacking threats.

“If you don’t have to run an email server, don’t,” Brian Krebs, an investigative journalist and author focusing on computer and Internet security, told Salon. “They can be a challenge to secure, especially against a determined adversary… Let someone who handles very sophisticated attacks every day do it. It’s a no-brainer.”

To set up and maintain such a server, according to The Atlantic, you need to purchase a physical server, roughly the size of a desktop computer; an operating system; an email exchange program such as Microsoft Exchange Server; a digital certificate of encryption (in Clinton’s case, the certificate wasn’t established until two months after she began using the server); and a domain name. Next, you install the software, virus and spam filters and set up firewalls. Then you establish a business-class Internet connection and configure the devices that will use the server.

After doing all this, correspondence will enter the Internet, unlike in a closed government server such as the State Department’s special system for emailing classified information. So who were the people who participated in this reckless arrangement that put classified documents at risk?

A number of Clinton aides and staffers, some dating back to before her secretary of state tenure, used the private server or exchanged messages with Clinton, who used it exclusively. Other aides to the Clintons set up and maintained the server. These individuals may no longer be eligible for elite security clearances in the future, potentially hampering their chances for an ambassadorship or a job in the Clinton administration, should she win the November presidential election, The New York Times reported. And any current State Department employees who were involved may face administrative action.

The staunchly conservative watchdog Judicial Watch has attacked the Clintons for years, initially launching 18 lawsuits against Bill Clinton while he was president. More recently, the group filed Freedom of Information Act requests relating to the aftermath of the Benghazi killings and for records detailing the “special employment status” of Huma Abedin, one of Mrs. Clinton’s top aides at the Department of State.

After the private email server was revealed, a federal judge allowed Judicial Watch to interview seven Clinton associates under oath. The group is now asking for permission to depose Clinton as her lawyers fight the request.

Here are some of the characters who facilitated and/or interacted with Clinton’s email server:

Bryan Pagliano is the aide who reportedly set up the private server, initially for Mr. Clinton to use for personal and Clinton Foundation business. Before becoming a “Schedule C political appointee” as a senior advisor in the State Department’s Bureau of Information Resource Management (IRM), he was an IT director for Mrs. Clinton’s 2008 presidential campaign, according to the State Department Inspector General’s report. While under the employ of the State Department, Pagliano helped maintain the server. In his June 22 deposition with Judicial Watch, he answered only one question: “Can you please state your full name?” Pagliano also pled the 5th before the House Benghazi Committee and was granted immunity by the FBI before testifying with the bureau.

Justin Cooper, a close former aide to Mr. Clinton, registered the clintonemail.com domain name and set up Mrs. Clinton’s email address on the private server days before she became secretary of state. Cooper also helped maintain the server, shutting it down in January 2011 when a hacker attempted to access it. According to the Washington Post, Cooper had no security clearance or “particular expertise” in computer security.

John Bentel directed the State Department’s IRM division during Clinton’s tenure. After two staff members voiced concerns about the private server, Bentel said that “the Secretary’s personal system had been reviewed and approved by Department legal staff and that the matter was not to be discussed any further,” according to the inspector general’s report. However, the report found no evidence that the legal team had reviewed or approved Clinton’s server. Bentel communicated with Clinton over email as the secretary used her private email address. Judicial watch is trying to depose him.

Huma Abedin is well known for being a close confidant and “adopted daughter” of Mrs. Clinton. She served as Clinton’s deputy chief of staff at the State Department before becoming a “special government employee,” allowing her to consult for outside clients while still advising Clinton at the State Department. She’s now vice chairwoman for Clinton’s 2016 presidential campaign. Prior to these posts, she has worked for Clinton in various roles since the mid-1990s.

At Abedin’s request, Cooper set up an account for her on the Clinton server around the same time he established Clinton’s address. Abedin was the second most frequent correspondent with Clinton and her private email address, according to the Washington Post. In her June 28 Judicial Watch deposition, she said she used her State Department email for the “vast majority” of her Department work but did use her clintonemail.com address at times for state-related matters. In the deposition, Abedin claimed not to have thought about the server until “all the press reports in the last year and a half came out.”

Cheryl Mills, Clinton’s chief of staff during her time at the State Department, was the most frequent correspondent with Clinton and her private email address, per the Washington Post. She was deposed by Judicial Watch on May 27. Mills messaged other staffers, saying that Clinton wanted to use her BlackBerry for email because she didn’t know how to use email on a computer.

Jake Sullivan, Clinton’s deputy chief of staff at the State Department and the third most frequent correspondent, according to the Washington Post, allegedly sent and received messages that are now considered “top secret” by the State Department, as well as many others deemed “confidential.” Sullivan is now a foreign policy advisor to Clinton’s presidential campaign.

In his position as executive director of the Executive Secretariat from 2008 to 2011, Lewis Lukens oversaw many employees, including those in the IRM division. In 2009, he emailed Abedin, Mills and Patrick F. Kennedy, suggesting Clinton be set up with a computer she could use in her State Department office to use the Internet — but not through the Department’s server — to access her private email account. The computer was never set up. Lukens’ May 18 deposition with Judicial Watch is here.

Monica Hanley, who has worked for Clinton for years and was an aide in the State Department, corresponded with Clinton from her State Department email account and a personal account. Hanley sent Clinton two emails marked “confidential,” but she may have improperly marked them as such in the body of the messages, not in the header, which is standard practice.

Stephen Mull, executive secretary of the State Department from 2010 to 2012, wrote to Abedin, Hanley and Kennedy that “we are working to provide the Secretary per her request a Department issued Blackberry … We will prepare two versions for her to use – one with an operating State Department email account (which would mask her identity, but which would also be subject to FOIA requests), and another which would just have phone and internet capability.” In his June 3 Judicial Watch deposition, he claimed not to remember anything regarding the communications or the topic. Mull is still with the State Department, now its lead implementation coordinator of the U.S.-Iran nuclear deal.

The fiery Philippe Reines is former deputy assistant secretary of state and senior communications advisor and spokesman for Clinton. He reportedly at times used a personal Gmail account for state business and lied about it, and he wrote once that he “want[ed] to avoid FOIA.”

Most of these individuals refused to meet with State Department investigators.

While some of these staffers may face disciplinary action and could be denied security clearances, it appears Clinton will escape punishment, as the Justice Department heeded the FBI Director’s advice not to criminally prosecute her. However, critical statements by the FBI director appear to have caused a dip in national polling in her presidential race against Donald Trump.

As president, Clinton would have access to virtually all classified and top-secret material. She will soon receive the Democratic Party’s nomination for that office.