All hate is not created equal: The folly of perceiving murderers like Dylann Roof, Micah Johnson and Gavin Long as one and the same 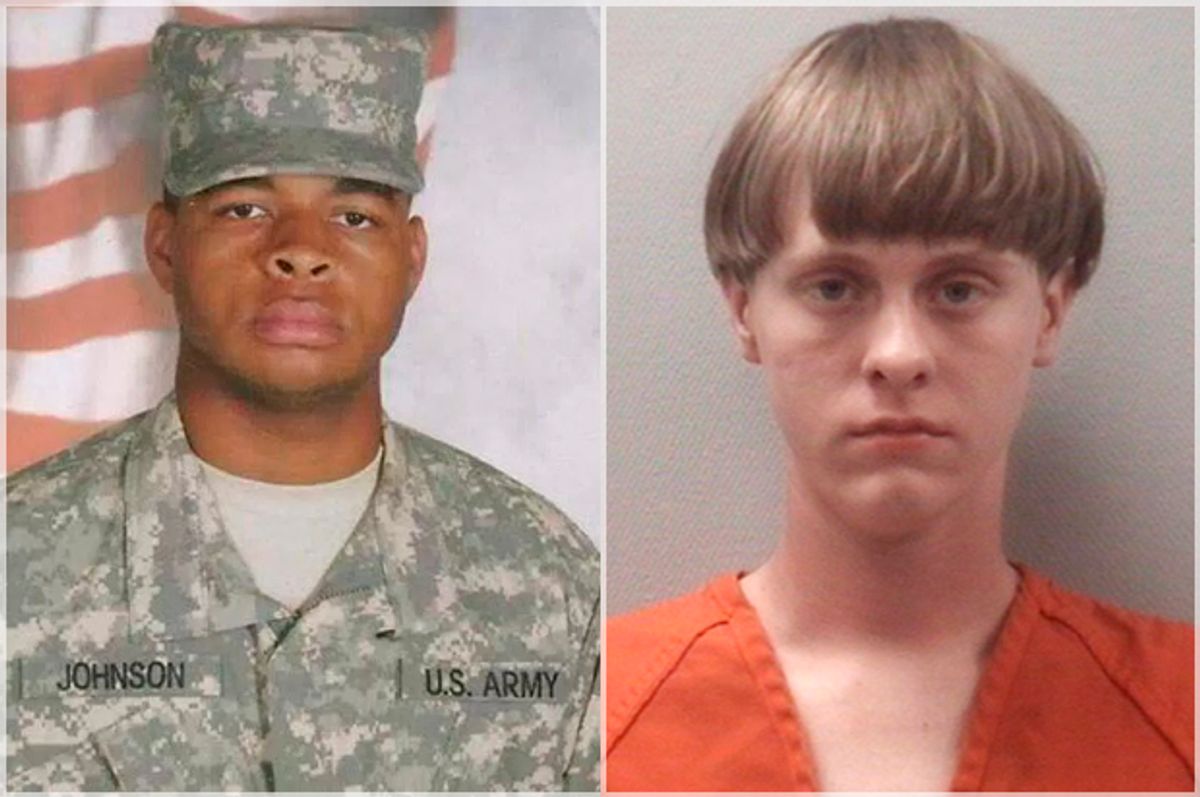 The Internet and social media are powerful tools for communication. They can help people organize to create positive social change. The Internet and social media can also help amplify the public voices of oppressed and marginalized communities. These same technologies are also a means to both circulate and give credence to lazy thinking, lies, and distorted understandings of empirical reality.

During America’s recent weeks of tumult and pain, when two black men were video recorded being killed by police and a peaceful march in support of Black Lives Matter was attacked by a gunman, leaving five officers dead, social media was aflutter with two repeated narratives.

Sunday’s attack by Gavin Long that killed three Baton Rouge-area police officers has only made them resonate more loudly.

The first narrative is that “killing someone because of the color of their uniform is the same thing as racism." This claim reveals a profound misunderstanding of what constitutes racism, as well as its impact on the life chances of people of color in the United States. A police uniform can be removed. A person’s skin color — and the value assigned to it by dominant society —cannot be so easily changed. In all, a belief that racism and the wearing of a uniform have anything in common with one another is the type of lazy thinking which is encouraged by the fiction that America in the Age of Obama is somehow “colorblind” or “post racial."

The second narrative is that, “Dylann Roof and Micah Johnson did the same thing”. This is not true. Yes, both men committed a horrible act of mass murder. But their motivations as well as the social and political context of their deeds are fundamentally different.

Roof is a terrorist. He committed an act of political violence against a marginalized and historically oppressed group.

Roof is a white supremacist. Driven by that belief, he decided to kill 9 unarmed black people after a prayer meeting in Charleston, North Carolina’s Ebenezer Baptist Church. Roof’s manifesto explains that he wanted to kill black people because white people were “oppressed” in their “own country," “illegal immigrants” and “Jews” were ruining the United States, and African-Americas are all criminals. Like other white supremacists and white nationalists (and yes, many “respectable” white conservatives as well) Roof’s political and intellectual cosmology is oriented around a belief that white Americans are somehow marginalized or treated badly in the United States. This is perverse and delusional: white people are the most economically and politically powerful racial group in the United States; American society is oriented around the protection of white privilege.

Ultimately, Roof’s views are absurd, twisted, fantastical, and possess little if any relationship to the world as it actually exists.

Micah Johnson is also a terrorist. Unlike, Roof, he targeted symbols of state power and authority.

Micah Johnson supposedly told police that he wanted to “kill white people," especially “white officers," because he was angry and upset about the recent killings of Alton Sterling and Philando Castile, as well as a broader pattern of anti-black bias and violence by America’s police. While Johnson may have exhibited signs of mental illness, his analyses, observations, and claims about police thuggery and violence against black and brown people in the United States are not untrue — no matter how vile his response may have been.

Gavin Long is also a terrorist, who like Johnson, targeted police. Long communicated via Facebook and other means his anger at the recent killing of Alton Sterling by the Baton Rouge police. He also felt that non-violent resistance and protest by groups such as Black Lives Matter would do little if anything to stop police thuggery and abuse against African-Americans.

Gavin Long felt that violent resistance would ultimately be necessary:

“If y’all want to keep protesting, do that, but for the serious ones, the real ones, the alpha ones, we know what it’s going to take.”

As such, he endorsed the actions of Micah Johnson. A day after Johnson killed 5 Dallas police officers, Gavin Long said via a video posted online that: “With a brother killing the police you get what I’m saying—it’s justice."

The sum effect of this unequal treatment is that the human dignity, sense of belonging and citizenship, as well as mental, psychological, physical and emotional well-being of black Americans is under assault by the country’s police.

Psychologist Monnica Williams has done extensive research exploring how racism impacts the mental health of people of color. She told Salon that, “comparing Dylann Roof to Micah Xavier Johnson or Gavin Long is akin to apples and oranges. We cannot compare the two groups of men. They all acted out in a maladaptive, violent, and unhealthy way. But there are very different reasons that people turn to white supremacy as opposed to the reactions we saw in Dallas and Baton Rouge — they are motivated by very different causes.

Dr. Williams continued with, “I am very surprised there haven’t been more Micah Johnsons and Gavin Longs. By all indicators, conditions have not improved for African-Americans relative to whites in the last 20 years. It is a testament to the strength, dignity, and character of black people that we’ve been able to forgive and that there has not been more violence and retaliation. At some point, black folks are going to wake up, and perhaps we will see a second civil rights movement, and I hope it will not be as bloody and awful as the first one was.”

Ultimately, Dr. Williams feels that, “It is very important to understand that trauma is not something that always happens in a single event, it is often a function of repeated actions and abuse that festers. This is all on top of community trauma, personal trauma, and historical trauma that African-Americans experience. It often does not get resolved, and these repeated traumas can lead to PTSD."

"For example, we see police killing black people on television and they are not punished. This contributes to the traumatization of black people because we can’t rely on law enforcement. And this is why we see riots and revolutions. That will likely not happen in this country. But when people can’t get justice it often leads to that," Williams said.

In many ways, it is a miracle that America has produced so few black men like Micah Johnson and Gavin Long. The Atlantic’s Ta-Nehisi Coates speaks to this sentiment:

Last week, 25-year-old Micah Xavier Johnson murdered five police officers in Dallas. This abhorrent act of political extremism cannot be divorced from American history—recent or old. In black communities, the police departments have only enjoyed a kind of quasi-legitimacy. That is because wanton discrimination is definitional to the black experience, and very often it is law enforcement which implements that discrimination with violence. A community consistently subjected to violent discrimination under the law will lose respect for it, and act beyond it. When such actions stretch to mass murder it is horrific. But it is also predictable.

The Southern Poverty Law Center has also taken note of how police brutality is fueling the growth of black “hate groups." ABC News reports that:

The public backlash against police shootings of black people is helping fuel the growth of black hate groups, some of which advocate retaliatory violence against law enforcement, watchdog groups said Monday.

The Southern Poverty Law Center counted 113 groups advocating black separatism, black supremacy or some other extreme, black-centric ideology in the United States in 2014. By the end of 2015, in the aftermath of last year's killing of a black man by a white police officer in Ferguson, Missouri, the number had grown to 180, an increase of nearly 60 percent in less than a year…

No one knows exactly how many people have been drawn to black extremist groups, but there's no reason to believe the growth of violent ideology is slowing. Last week's protests of police shootings in Louisiana and Minnesota have only spread since a black sniper killed five police officers at a demonstration in Dallas.

"It draws people to their ranks, people who are mad about what is going on with law enforcement," said Heidi Beirich, director of the Alabama-based center's Intelligence Project, which tracks extremist organizations.

As Professor David Franfurter explains in his book "Evil Incarnate: Rumors of Demonic Conspiracy and Satanic Abuse in History," it is tempting to call Micah Johnson, Gavin Long, Dylann Roof, or other people who commit horrific acts “evil," but such a label often hides and obscures more than it reveals.

The label of “evil” also interferes with doing the political and philosophical forensics that are necessary to correctly identify what features of American society drove both men to commit their acts of murderous rage.

Micah Johnson was motivated by anger about police violence and thuggery against people of color. In short, Johnson and Long were, in many ways, “the hate that hate produced."

A belief that Micah Roof, Dylann Roof , and Gavin Long did the “same thing” also reflects a tendency to ignore questions of societal power relationships when discussing race in America.

Explaining this dynamic, sociologist Jessie Daniels told Salon that, “The actions of Dylan Roof, Micah Johnson, and Gavin Long are not the same, though they may seem so to those who insist on a very narrow and facile view of race. In this narrow and facile view, we want to apply the identical, symmetrical "rules" to everyone, but it doesn't work when you're trying to understand how racial inequality works because it's asymmetrical. When one group (whites) has a disproportionate share of power, the exact same actions (a mass shooting) can have completely different meanings.”

Dylann Roof was delusional; his understanding of reality colored by white racial paranoiac fantasies. However, Roof was not born that way. He was socialized into hatred by a right-wing news media that encourages stochastic terrorism among its audience by the repeated use of eliminationist rhetoric, subtle and overt racism against non-whites, conspiracy theories, and reactionary language such as “real America” and “take our country back."

Roof was also taught hatred by white supremacist and white nationalist organizations that have increased their recruitment in the United States since the election of Barack Obama, the United States’ first black president, in 2008. Roof is also a sign of much broader systemic problems in American society where working class and poor whites have been taught to ground their identities in the psychological wages of whiteness instead of the struggles and common interests they share with people of color in the same economic cohort.

Dylann Roof’s wicked deeds were widely and resolutely condemned. Micah Johnson’s attack on police in Dallas have been (and quite rightfully so) condemned as well.

But to move forward, together, as we try to stop police brutality, and also work to end the mass gun violence that is all too common in the America, will necessitate asking hard questions about our national character and values.

It will be tempting for many Americans to look away when they learn something inconvenient and painful about their country. But if American society is to be made more equal, fair, and just for all people it will require that we not avert our eyes because of the uncomfortable truths that we need to confront as a people.