Free Jillian Holtzmann: It’s time for Sony to let the most compelling Ghostbuster be out and proud 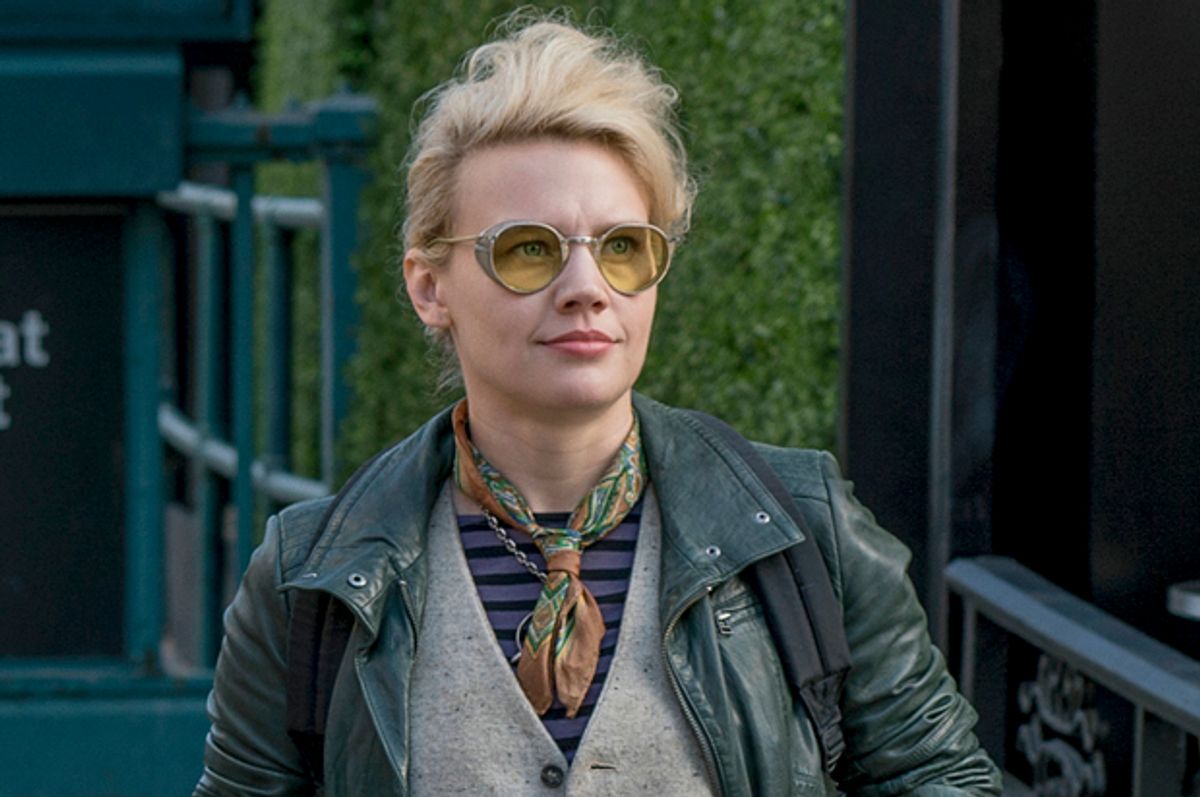 In a recent interview with The Daily Beast, the prolific director discussed Jillian Holtzmann, the breakout fan favorite from his “Ghostbusters” reboot. Played by Emmy nominee Kate McKinnon (“Saturday Night Live”), Holtzmann is nothing short of a revelation. Sporting yellow-tinted goggles, a leather jacket, and a haircut that suggests her barber is a light socket, McKinnon exudes an off-kilter bravado that’s reminiscent of a young Bill Murray, whose deadpan delivery made the 1984 feel unique and unpredictable. Whether it’s eating a potato chip while hunting down ghosts or appearing out of nowhere wearing a bright purple wig, anything can happen when Holtzmann is onscreen.

For many viewers, one facet of her character particularly struck a chord: her flirtationship with Erin Gilbert, a fellow scientist played by fellow “SNL” alum Kristen Wiig. The first time they meet, Holtzmann appraises Erin, giving her a long, penetrating stare. “Come here often?” she asks. Later, Holtzmann offers a sly smile and a wink in Erin’s direction, the tease that launched a thousand Tumblr posts.

Queer audience members, like AfterEllen’s Trish Bendix, took it as a sign that Holtzmann is a lesbian, but Feig was evasive on the subject. As he reminded The Daily Beast’s Jen Yamato, Feig has a studio to please. "I hate to be coy about it,” he said, “but when you’re dealing with the studios and that kind of thing.” The director said that most of Holtzmann’s persona was based off McKinnon herself, who is an out lesbian. “This is stuff that is coming out of Kate!” he explained. “That’s why you connect with those characters. They’re playing versions of themselves. That’s what makes a comedic actor fantastic, when that personality comes out.”

A separate interview with screenwriter Katie Dippold (“Parks and Rec”) didn’t clear things up much. Speaking to The Wrap, Dippold said that she would describe the character as “outside the box.” She added, “Someone like that would never have any kind of labels.”

It’s difficult to speculate what the creators of the “Ghostbusters” reboot have and have not been allowed to say, but Feig strongly hints that Sony is keeping a tight lid on the subject of Holtzmann’s sexuality. In an era where television is breaking unprecedented ground in LGBT representation, you might wonder why Sony would consider issuing a gag order on something that doesn’t seem like that big a deal. It’s 2016! Hasn’t Sony seen “Empire?” But the problem is that Hollywood has become increasingly conservative about queer inclusion in an era where big-budget tentpoles have to make as much money as possible to justify their production costs. That bottom line will keep forcing characters like Holtzmann back into the closet.

With or without Holtzmann, “Ghostbusters” faces an uphill battle to breaking even financially. The film, also starring Melissa McCarthy (“The Boss”) and Leslie Jones (“SNL”), bowed to $46 million its first weekend in theaters. That’s the best live-action comedy opening since the smash debut of “Pitch Perfect 2” last year and the best opening of Feig or McCarthy’s careers. Their previous best was “The Heat,” which premiered to $39 million three years ago.

Those would be big numbers for a movie with a smaller production budget. “Spy” and “Bridesmaids,” two of Feig and McCarthy’s previous collaborations, carried respective budgets of just $65 million and $32.5 million, chump change by studio standards. “Ghostbusters,” though, cost $144 million to make, and that’s before production and advertising. Deadline estimates that Sony spent over $100 million to market the film. Factoring in the costs of worldwide distribution, “Ghostbusters” will likely have to earn at least $300 million at the box office to finish in the black, twice its production budget.

That will be much harder to do after the film was denied a release in China, the second-biggest film market in the world. Although many speculated the ban was due to their distribution board’s prohibition on movies with supernatural content, its members just didn’t feel there was a demand for the film in China. "Most of the Chinese audience didn't see the first and second movies, so they don't think there's much market for it here” one executive told The Hollywood Reporter.

The Chinese film market has been a godsend to “X-Men: Apocalypse,” “Alice Through the Looking Glass,” and “Warcraft,” domestic underperformers that all earned big bucks overseas. As of the time of writing, “Warcraft” has earned $220 million in China, which accounts for more than 50 percent of its worldwide gross. “Ghostbusters,” without that cushion, has a much steeper climb to profitability.

“Ghostbusters” was always considered a risk to its studio. In order to get the picture off the ground, Feig told Jada Yuan of Vulture that he had to “[cash] in all [his] chips.” He continued, “I had to use every chip to make this happen.” According to Feig, there’s a mentality at the studio level that women can’t carry tentpole movies—especially women over 40. (In “Ghostbusters,” only McKinnon is under that mark.) Any factor that adds additional risk to the equation—such as having the best queer character in a big-budget film in recent memory be out and proud—is not considered an option for a studio that has to answer to its shareholders.

When it comes to pleasing the Chinese film market, that may be one gamble too many. Although same-sex intercourse was decriminalized in 1997, the portrayal of homosexuality remains banned outright on Chinese television. A 2013 report from USAID shows that the subject remains equally taboo in the workplace: 47.62 percent of LGBT people in China reported that they weren’t out to their coworkers in fear that they might lost their job. Statistics from PFLAG further showed that many queer folks in China aren’t open with friends and family about their sexuality either: Although there are an estimated 40 million LGBT people living in the country, 98 percent choose to stay in the closet.

The issue, however, is not solely a Chinese problem. “Captain America: Civil War,” the biggest international hit of the year so far, earned a not inconsiderable sum from territories where homosexuality is still punishable by law. These include Malaysia ($10 million), India ($12 million), Singapore ($8 million), Russia ($16 million), and the UAE ($6 million).

Things are, however, changing in many of these countries. India’s Supreme Court, for instance, is set to rule on its prohibition against homosexuality, which dates back to the colonial era. That law was struck down in 2009 but reenacted by a court decision four years later. In China, progressive cities like Hong Kong and Shanghai are now home to some of the continent’s most vibrant Pride festivals, safe havens for the country’s LGBT community. In Shanghai, there’s even a yearly LGBT film festival.

“Star Trek Beyond” will represent a major test for the global film market. The Justin Lin-directed film will feature the long-running movie and television series’ first gay character: It’s revealed that Hikaru Sulu (John Cho) is gay and that he and his partner have a daughter together. Simon Pegg, who co-wrote the script for “Beyond,” says that the reveal is true to the groundbreaking history of “Star Trek” itself. “I don’t believe Gene Roddenberry’s decision to make the prime timeline’s Enterprise crew straight was an artistic one, more a necessity of the time,” he said in a statement. "Trek rightly gets a lot of love for featuring the first interracial kiss on U.S. television, but ‘Plato’s Stepchildren’ was the lowest rated episode ever.”

Could “Star Trek Beyond” follow that trend by bombing at the global box office? Perhaps. Rebooting Sulu’s sexuality has proven surprisingly controversial—with George Takei, who portrayed Sulu in the original series, claiming that the decision isn’t true to creator Gene Roddenberry’s original vision.

But if things are getting better for LGBT people around the world, there are signs that Hollywood may be changing along with it. Currently, the biggest movie of the year in the U.S. stars an out lesbian actress: “Finding Dory,” which is set to become the highest-grossing animated movie of all time, features Ellen Degeneres in the title role, playing a perpetually confused fish. In addition, a lesbian couple briefly appears in the film. Their inclusion initially sparked outrage from conservative groups on the Internet, but the backlash has done nothing to harm the film’s box office grosses. Arguably, it has only helped raise awareness about the movie.

If it wants make continued progress for its queer viewers, Hollywood has a lot of work do to catch up. As of last year, just 17.5 percent of major studio releases featured an LGBT character, and many of those representations were less than ideal, to say the least. For things to improve, they have to be willing to boldly go where no tentpole has gone before—by allowing everyone’s favorite queer gadget whiz to say what we already know.

It won’t change the world, but if you have to start somewhere, why not with a wink?