Let the madness begin: All signs point to four days of complete insanity 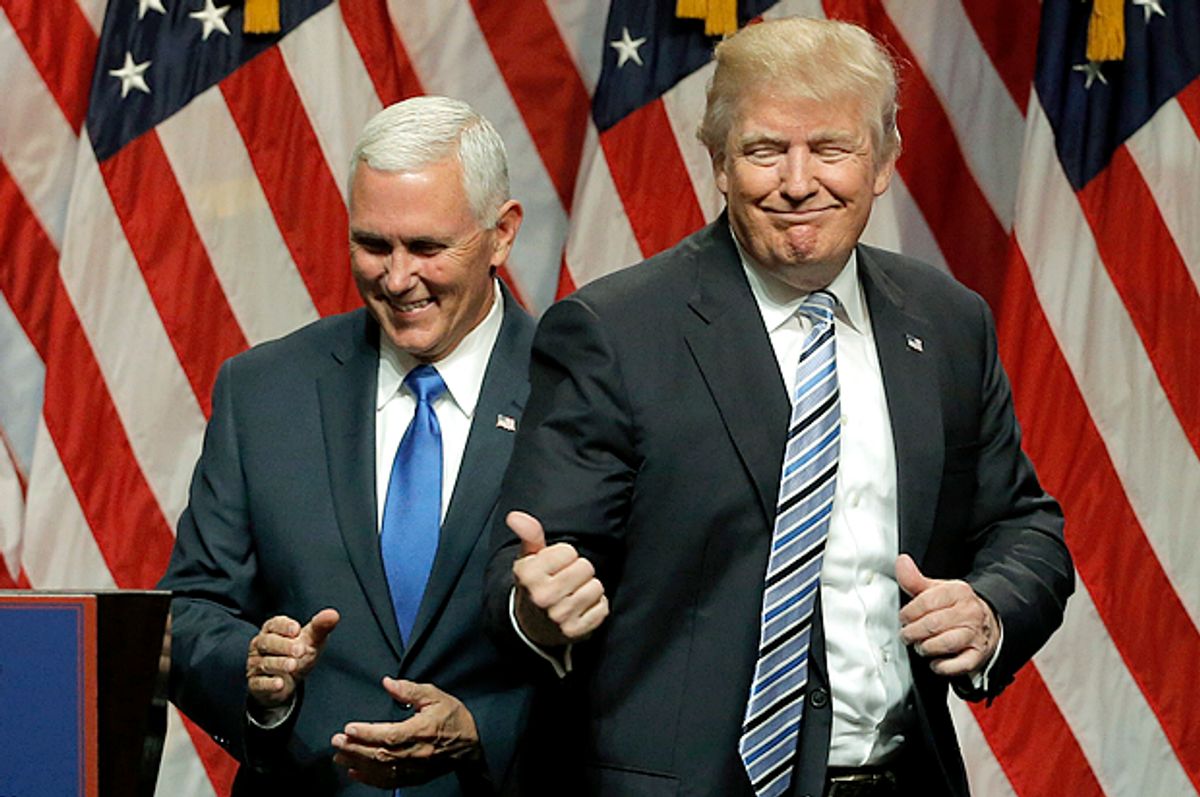 The GOP convention kicks off today and if it goes as well as Trump's vice president roll-out drama it should be exciting in a fiery train wreck sort of way. If there's one thing Trump does understand it's the reality TV show formula. His most important decision of the campaign was an exercise in public humiliation for every one of the sad, desperate men who threw their integrity to the wind and prostrated themselves before him. He didn't even offer them a rose.

By the middle of the week, it seemed to have come down to three, Gingrich, Christie and Pence. Keeping the suspense high, a formula requirement, the campaign leaked like a sieve, each story contradicting the other. Chris Christie who had pretty much become The Donald's man servant over the last couple of months was probably the most pathetic, appearing to have sold his soul without realizing that Trump's trusted son-in-law, Jared Kushner would likely put the kibosh on him since he put Kushner's daddy in jail for a very long time. It's a pretty big ego that would have believed that wouldn't be a problem, but this is Chris Christie we're talking about.

Then there was Newt, the garrulous psuedo-intellectual whose aggressive nasty streak was very appealing to the equally nasty Trump. Kushner was rumored to be in his corner, largely at the behest of Sheldon Adelson, a real multi-billionaire, who actually writes big checks. But the rest of the Trump brood reportedly preferred the midwestern wingnut Mike Pence, likely out of some deluded and desperate belief that they could normalize their father by choosing a standard issue conservative Republican. Unfortunately, after it had leaked that he was chosen, the campaign insisted that a choice hadn't been made so they could keep the "suspense" alive until the big announcement. When that had to be postponed because of the horrific events in Nice, Newt went on Fox and made a last minute hail Mary play for the job by taking a position on terrorism even more preposterous than Trump's, by proposing a sort of Inquisition demanding that all Muslims disavow Sharia law and deporting all those who "fail the test."

It was later reported that Trump was calling his advisers that night to find out if there was any way he could get out of his dull choice. Whether it was because he saw Gingrich's boldly fascistic performance is unknown but it wouldn't be surprising if it made him wish he'd gone with his gut. Sadly, the end result is that Gingrich abased himself for nothing and had to backtrack madly the next day while the man who was left waiting in New York for the big announcement looked like a consolation prize. The NY Times reported one wag commenting about the process, “It’s death by humiliation. Slow, twisting and played out in public, like a reality show elimination.”

Trump finally announced his choice via twitter and the campaign released the new Trump Pence logo which featured a weirdly suggestive image of the letter "P" being penetrated by the letter "T." Coming as it did from a family that is known for being branding experts it seems odd someone wouldn't have noticed this before.

At the ceremony Trump openly implied that he was reluctantly talked into Pence saying, "I think if you look at one of the big reasons that I chose Mike, and one of the reasons is party unity. I have to be honest. So many people have said 'party unity,' because I'm an outsider" and went on to talk about himself for about half an hour. He didn't even bother to stand on the stage next to Pence as he accepted the honor. There's only one dominant silverback and he doesn't share the stage with a lesser males in the clan.

Reports about the haphazard convention planning and Trump's interference are everywhere. According to The New York Times, the Republican establishment is very nervous:

Republicans are queasy over the possibility of Mr. Trump going off half-cocked if a convention moment is not to his liking or rebellious delegates go ahead with a plan to try to block his nomination, while some are concerned that he will be heavy-handed in urging speakers to attack the Clintons, immigrants or others with language that alienates undecided voters.

Have they met Donald Trump?

Meanwhile, Trump has been working overtime to continue his feud with the #NeverTrump contingent which was defeated in the Rules Committee over the week-end. Always the gracious winner, he tweeted:

#NeverTrump is never more. They were crushed last night in Cleveland at Rules Committee by a vote of 87-12. MAKE AMERICA GREAT AGAIN!

The Rules committee meetings were contentious, with accusations of the votes being "rigged" from the #NeverTrump forces. There were even reports of Trump associates strong-arming delegates who attempted to organize against their man, according to the Washington Post:

Kim Taylor Fralick, a delegate from Lousiana, said she received at least three emails from Carl Paladino, a New York delegate and close associate of Trump. He was responding to an email sent by Fralick encouraging convention delegates to join Unruh's group.

"It's like pissing up a drain pipe. You get wet. A revolt will never materialize," Paladino wrote to Fralick.

He was downright threatening to a delegate from Utah.

"You should be hung for treason Stefani. There will not be a Republican Party if you attempt to replace Trump. I'll be in your face in Cleveland."

Lest you think Paladino is just some fringe right-wing functionary from an upstate dairy farm, he was the Republican nominee for Governor of New York in 2010.

Trump and his followers managed to enrage the  #NeverTrump group so much that there are now plans afoot to create chaos on the floor by forcing procedural motions that will bog down the program. And they may attempt a full roll-call in prime time where delegates from each state can call out their preferences for anyone but Trump. Whether that's a real possibility remains to be seen but feelings are running very high.

And that's just the drama taking place inside the hall. In the streets of Cleveland, there are groups gathering from around the country to protest and counter-protest, from bikers to anarchists to open-carry zealots. For many reasons, let's hope that Trump is not spared the spectacle of an angry mob inside the convention hall because of one outside of it.