There is one cop estimated for every 10 attendees, while the RNC did not even release a detailed schedule 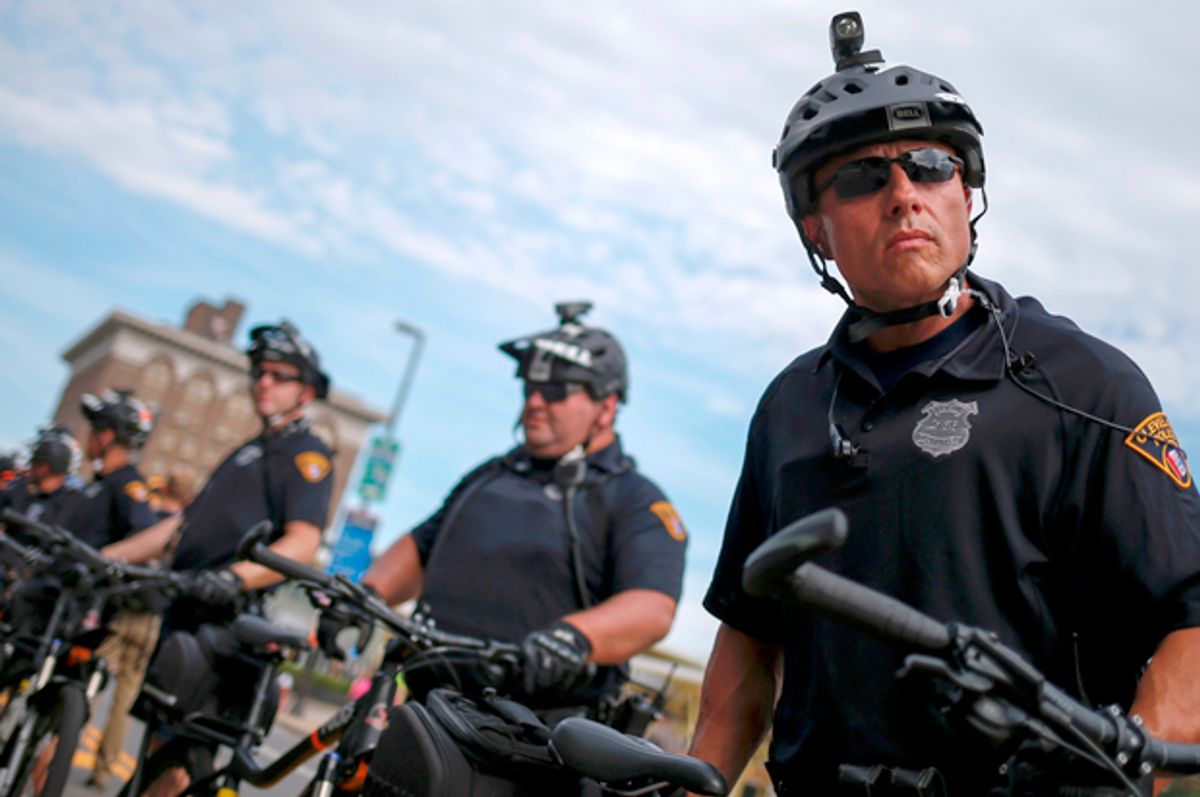 So far, the RNC has been low on organization and high on police presence.

In fact, organizers did not even release a detailed schedule of speakers until Monday afternoon, when the convention began.

The official guide for the RNC — which does not include a schedule — did, however, open with a photo of a smiling Donald Trump embraced by his wife, Melania.

Numerous reporters told Salon they were frustrated at the lack of available information, which made it difficult to organize coverage.

At the same time, while it appears that the RNC under-prepared, the police may have over-prepared. Cops flooded the streets; everywhere one looked, they were there.

Estimates put the number of police at one for every 10 attendees. Approximately 5,000 officers were deployed throughout downtown Cleveland, with roughly 50,000 people expected to attend.

Many of the police were not from Ohio. Some of the officers were from states as far as Texas and California.

Police were everywhere. In many ways, it looked like the city is under martial law. Tall barricades stretched throughout downtown Cleveland, preventing cars and even pedestrians from crossing. Even taxis were unable to get through.

There were "No drone zone" signs on the barricades.

Police are preparing for massive protests. Sunday did not have a lot of protest activity. The official convention began on Monday. Large demonstrations are planned to be held throughout the week.

Cleveland spent $50 million in federal grant money on police for the RNC. The city spent $20 million on riot gear and equipment — including at least 2,000 full-body riot suits, 24 sets of ballistics body armor and 300 patrol bikes. It also spent another $30 million on "personnel-related expenditures."

The American Civil Liberties Union, or ACLU, sued Cleveland in June for "placing unacceptable restrictions on free speech and other rights of people living and visiting downtown Cleveland for the RNC."

The civil liberties group called for a reduction in the size and regulations of Cleveland's “Event Zone,” a 3.3-square-mile area downtown with restrictions on protests and possessions. The ACLU argued this policy made political demonstrations difficult and effectively "criminalize[d] everyone."

Cleveland and the ACLU reached a settlement in late June.

On Sunday night, the RNC held an introductory "Rock the Night" party. It featured a concert by the band Three Dog Night, along with a fireworks show outside the Rock and Roll Hall of Fame.