Terrifying politics aside, let's take a moment to lavish in the supreme weirdness of the RNC spectacle

A parade of supplement-shilling ex-pols and underwear models are just a warm-up for the main event: Trump himself 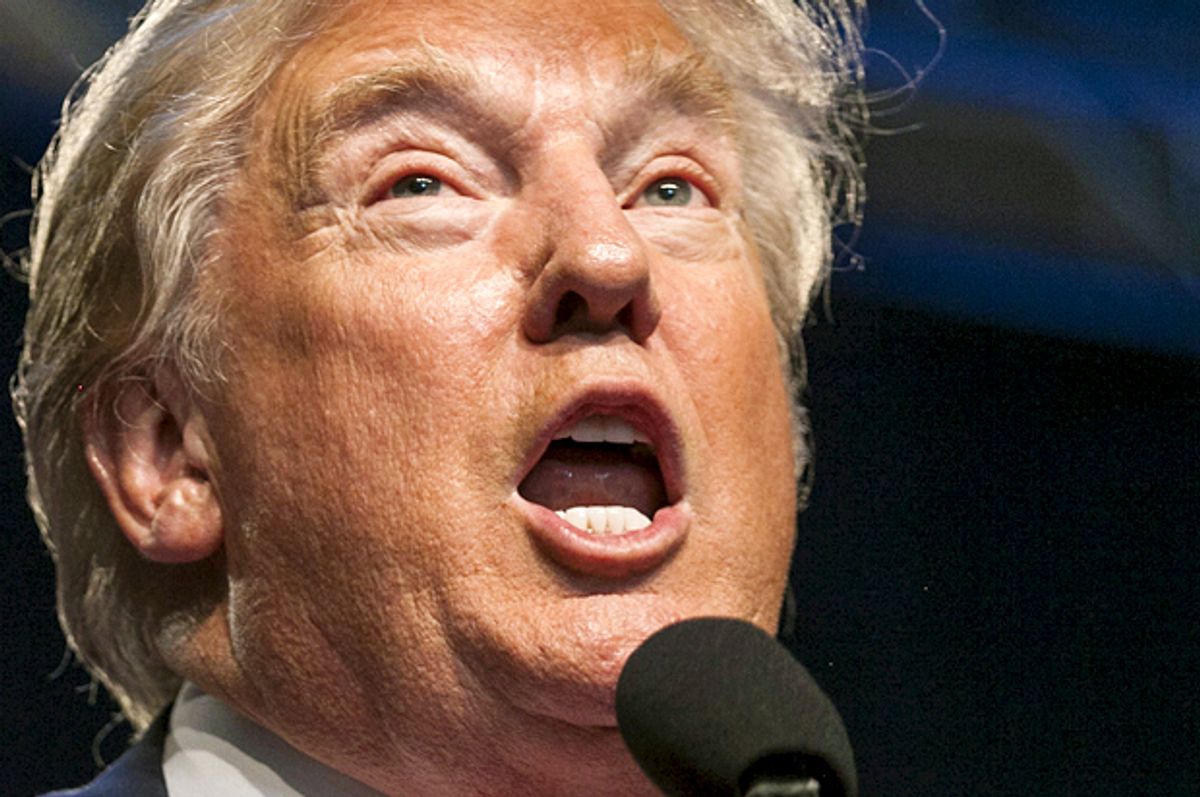 Here we go! The Republicans are streaming into Cleveland for what almost certainly will be one of the weirdest and wildest political conventions ever. It’s going to be a spectacle to behold.

Say what you will about Donald Trump’s almost infinite ignorance about every issue confronting the country, there is nobody, absolutely and unequivocally nobody, who can stage a Trump adore-a-thon better than Donald Trump.  It’s going to be huge! The best convention ever convened! The best speakers ever gathered! It will have the best platform ever conjured forth by a political party (not that Trump will ever read it or know what’s in it, but it’ll be great!). Xenophobes, Klansmen, White Nationalists, misogynists, Birthers and other Republican constituency groups will be gathered as one to sing hosannas to Donald Trump.

Trump endorser and Speaker of the House Paul Ryan, who (not that it mattered) denounced Trump as a textbook racist, will be there to lend his support to the leader of his party. Senate Majority Leader Mitch McConnell will speak at the convention. Presumably the same Sen. McConnell who said (not that it mattered) that Trump was not qualified to be President and said (not that it mattered) that Trump was not a credible candidate. Sadly, that doesn’t stop Mitch from continuing to be Trump’s bootlick. At least Paul Ryan is mildly entertaining pretending to wrestle with himself in some enormous existential struggle with whatever should be his next step after determining that the guy he sucked up to and endorsed is a serial lying, racist, con man. Everyone knows what Ryan will do, but we appreciate the Kabuki. Does it get easier every time Paul? How ‘bout for you, Mitch?

Several of the Republican Party’s presidential candidates flim-flam wing will speak for Trump; the ones who run for the publicity and the mailing lists to exploit later.  Dr. Ben Carson will give a rousing speech extolling Donald Trump’s virtues and the apocalypse if Hillary is elected. In a weird twist, Dr. Carson is a real physician who plays a politician on TV. In between these roles, Dr. Carson hawks Mannatech corporation’s “glyconutrients food supplements” which they claim can cure autism and cancer. Former Gov. Mike Huckabee is going to speak, too. Huckabee uses his mailing list to sell the Matthew 4 Protocol which comes with not only a pamphlet but a bonus video(!), too, which together reveal a cure for cancer hidden in Bible verses. Mike also used his mailing lists to peddle the Diabetes Solution Kit food supplement which they claimed could cure diabetes. The American Diabetes Association and the Canadian Diabetes Association both “urge caution” and both organizations say these supplements are not effective. But who are you going to believe, Gov. Huckabee or those elitist snobby people who talk about all that science stuff? Yeah, yeah. But who are you going to believe if you’re on Huckabee’s email lists?

Can you imagine the level of cynicism that goes through someone’s mind that after they lose a Presidential political race and then they look at their mailing lists and think that if those people on their lists were gullible enough to believe the claptrap nonsense they peddled as a candidate, they’d be easy marks to be cheated with email spam selling worthless food supplements, survival seeds, over-priced gold, expense-laden annuities, charlatan medical cures and, really, anything at all that someone is willing to pay for to have their product endorsed? The Democrats don’t have a scam-wing of candidates that run for President like this. The Republican Party has it as a cottage industry complete with media outlets like FOX and Newsmax (which get a cut) to promote whatever malarkey the former and future candidates are cheating their flocks with at any particular moment. No wonder the Republican base is so angry.

Dana White will speak. If you are an elitist snob and don’t recognize the name, Dana is the President of the UFC, the Ultimate Fighting Championship.  He just turned the UFC into a billion-dollar business, negotiated a sliver for himself and made a little money and made a lot more money for a lot more people along the way. Good for him. Is this a great country or what? I like Dana, but I can’t figure out why he’ll be speaking at the Republican convention except he does tweet about his genitals a lot. Stuff like slapping them in your momma’s face. Yes, really. And an underwear model is going to speak and extol Trumps virtues at the convention. I have no idea the relevance, or if he is Trump’s private underwear model or what, nor any clue what he will speak about. Maybe Dana and Donald and the underwear guy will borrow some AR-15s from Ted Nugent and wave them in the air while dancing around the stage comparing hand sizes.

Jerry Falwell, Jr. will be there to lend his righteous oratory to Mr. Trump. You would think that he would have been embarrassed when Trump visited Liberty U. and referred to his favorite Bible verse as being from the book of “Two Corinthians” proving that he had no first-hand knowledge of the Bible whatsoever. Or you might imagine that Trump’s multiple affairs and subsequent multiple divorces or Trump saying that avoiding STDs in the 70s was his own personal Vietnam would give Falwell pause. Instead, Jerry Jr. declared that “Donald Trump lives a life of loving and helping others, as Jesus taught in the Great Commandment.” Since expressing this remarkable insight into Donald Trump’s character, Jerry Jr. has compared Trump to Jesus and to Martin Luther King. They were favorable comparisons, too.

Florida Attorney General Pam Bondi will give a speech at the convention. A few days before the Florida Attorney’s General office was to decide on whether or not to join in a multi-state fraud lawsuit against Trump University, Pam personally solicited a $25,000 “contribution” from Trump to her re-election campaign. A few days after one of the Trump foundations transferred the $25,000 to her campaign, she had her office drop the case against Trump U. Pam probably won’t mention all of the ensuing ethics investigations. The theme of her speech is reportedly going to be respect for the law.

Gov. Mike Pence, who last December said (not that it mattered) some of Trump’s policy proposals were offensive and unconstitutional, will accept the Vice Presidential nod and will presumably endorse Trump. I must say I’m still a little baffled by the selection. Does Trump sincerely feel that after all he has said about women, he has not pissed them off enough yet and so he felt he had to select Mike Pence to prove his utter contempt for them? Gov. Pence actually has a lot going for him vis-à-vis Trump’s Veep. He’s not a member of a white nationalist group and, as with seemingly most any of today’s Republican political figures, as soon as Trump offered him Veep position, he was able to make his deeply held ideals and principles and beliefs and positions on issues like international trade and immigration just dissipate into nothingness like the sugary effervescent spray from a soda can when you pop the top. Anyway, Gov. Pence is almost certainly going to speak.

But THE speech, the speech that will be the pièce de résistance of the whole campaign so far, the best and biggest speech of the best convention ever, the speech that the whole world is quivering in anticipation for, will be the speech that chief Birther Donald Trump gives when he accepts the nomination as the Republican candidate for President of the United States. God forgive them. And it will be a good speech, vetted by everybody and laid out on the teleprompter just like Hillary’s speech will be when it’s her turn.

Who knows what he will say? It could literally be anything. He could segue from promising to match the barbarism of any terrorist torturer to advocating using small, little-bitty, limited tactical nuclear weapons in the Middle East against ISIS. He could be listening to the voices in his head as he walks up to the dais and then say he heard that Hillary had her Foundation finance the contract with the New Black Panthers to protect Planned Parenthood facilities.  Maybe in the audience, Trump will welcome back into civilization one of his Birther investigators who has been found after being lost for the last eight years heroically wandering through the wilderness of Hawaii searching for the elusive long form. The crowd goes wild! The feedback feeds back. Trump is going to be Trump in the biggest speech of his life speaking from the podium of the Republican National Convention accepting their astonishing nomination to be President of the United States.

It’s going to be a spectacle to behold.