"The Night Of" recap: Naz goes into the belly of the beast 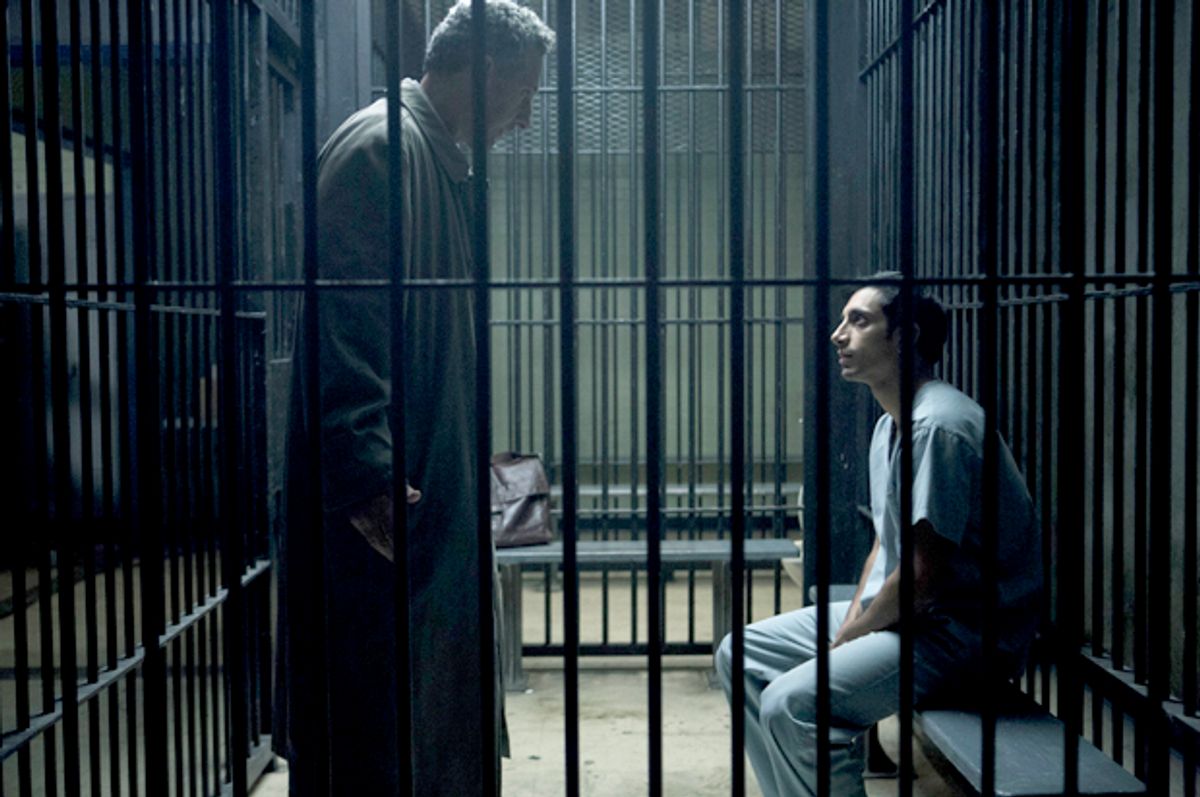 John Turturro and Riz Ahmed in "The NIght Of" (HBO)
--

The following recap includes plot details from the second episode of “The Night Of.”

The title of this second episode, “A Subtle Beast,” functions as a sort of creative imperative for "The Night Of": Though the subjects it addresses—murder and racism, and the hellishness of the criminal justice system—lend themselves too easily to salaciousness, the series parses out their nuances like a pair of steady hands panning for gold. A causal poetry of details—an inhaler, an object evoking the idea of breath itself, left next to a corpse; the grimy glass partitions separating two sets of parents from the bureaucracy that holds their children; and the Harvard University t-shirt that Detective Box gives to Naz before the latter’s transfer to Riker’s Island—reveals the brutality of life. And if the series premiere was a pulse-quickening, breath-stealing rush into a nightmare, this episode, in doing the slow work of positioning our characters for Naz’s trial, allows us to exhale.

I’m tempted to describe this as a place-setter episode, since the bulk of the plot churns toward the inevitable fact that Naz will be formally charged and tried for Andrea’s murder: Box attempts to procure a confession; Jack Stone tells his client, with varying degrees of snappishness and sass, not to talk to the lawman; Naz’s parents endure the byzantine beastliness that is the municipal system as they try to see him; Box brings his case to a delightfully wry district attorney who’s seen it all and rented the sequels; and finally, Naz is shuttled off to jail, where his innocence is contrasted with the stark hardness of his fellow inmates. This is all well within the frame of any conventional crime story—and yet, place-setting seems too meat-and-potatoes a term for the work that’s being done beyond the surface here. From the performances on to the camera angles and even the color schemes, this feels like world-building.

The illuminative power of tiny details makes the world of Westeros or "Mad Men"’s throwback Manhattan so potent and alive, and yet "The Night Of" makes the work-a-day world we all live in now seem as menacing as a planet where dragons blitz fire from the sky (or a city where you could end up as Pete Campbell’s co-worker). If anything, working within a relatively narrow narrative scope—crime, trial, and resolution—has freed co-creators (and, respectively, writer and director) Richard Price and Steven Zaillian to get more expansive with the individual elements of their story.

Take, for instance, the ways that Naz and Andrea are faintly, almost imperceptibly, paralleled, even from the first images: a series of discordant close-ups of the deer head hanging in Andrea’s brownstone. As we zoom in on the dead animal’s glossy black eye, we hear Andrea and Naz grunting and sighing in their brief moments of passion—and then, transitioning into a shot of Naz sitting helplessly in his cell, we hear something new: Andrea’s voice pleading for him to do, whatever he’s doing, “harder.” Is this memory an erotic reverie meant to distract Naz from his solitary terror, or an unconscious answer to the question that Box that will ask him, point-blank: How did this happen?

And yet, for a crime procedural, the show is not obsessively vested in the issue of Naz’s guilt or innocence (at least right now). It actually establishes a kind of shared pathos between Naz and Andrea, with the slate-gray walls of his cell as an eerie complement to the metal-gray autopsy table where her body will be cleaved open one final time. After all of this, two lives will be over—one very literally, of course; but, after the lawyers and the media vultures have picked the bones of Naz’s culture, identity, and family clean, leaving only the gristle of slurs and insinuations, the other one might simply not be worth living. The victim and accused are now just as doomed, and displayed, as that dead deer.

If the pilot episode had one flaw, it was Andrea herself, who felt more like a manic pixie dream murder victim than an actual human being. In this second episode, we learn a little more about who she was in life, and how that life led her to become the nihilistic party girl who slunk into Naz’s cab. Her only next-of-kin is an aloof stepfather (played by Paul Sparks) who greets Detective Box’s call with a weary, “what did she do now?” The stepfather tells Box that both of Andrea’s parents have died, and that, in her grief, the girl turned to drugs and drink and dubious bedfellows. It’s so on-the-nose that it falls flat on its face (at this point, I’m fearful that the show may have an ongoing “Andrea problem”)—particularly when juxtaposed with some of the smaller, more powerful moments, like the twinned journeys of Naz’s parents, Salim and Safar, and Andrea’s stepfather (who we learn is named Don Taylor), through dirty, fluorescent-lit hallways, and behind those glass partitions, as they endeavor to see, or identify, their children. The flatness of Don’s feelings (he approaches seeing Andrea’s body with a dead-eyed listlessness) only amplifies the Khans’ urgent, and very lived-in, love for their son. They even try to bring food for him—like he’s away in a dorm room. There is such pathos in that tinfoil-wrapped plate, and the camera returns to it, over and over, as if it is some failed talisman of protection.

The other thematic pairing that emerges this episode is Detective Box, the titular “subtle beast” and the not-so-subtle beast who gives him that nickname, John Stone. One of the best, and most telling moments, is Stone’s jailhouse speechifying about Box as “a talented oppressor” superimposed over footage of Box investigating the crime scene with nimbleness and intensity. The slight tenderness that crosses his face as he examines Andrea’s body is heartbreaking, as if, no matter how often he sees scenes like this, they’ll never stop wrecking him, just a little. Box and Stone anchor the “law and order” side of the show, and though each man’s motivation may seem clear—to get justice, or to get his client off the hook—there are other, more submerged, reasons for their actions. Box is very transparently all about the job. Most of the kindnesses he shows—like letting Naz’s parents into the interrogation room with their son (so he can tape their conversation); or returning Naz’s inhaler to him (which only further implicates him, since the inhaler was found with Andrea’s body)—are about closing cases. And yet, the t-shirt he gives Naz before he sends him off to the courthouse jail, a blue Harvard shirt, is a gift in more ways than one: That shirt announces Naz as a college kid, a non-threatening entity, as he shuffles into a cell with a cluster of angry men itching for a fight. When the district attorney asks Box if he really thinks Naz is his guy, tells him that he’s “blinked,” Box retorts that he's simply been up for 56 hours. Still, the seemingly insignificant gesture of giving Naz that particular shirt evokes Box’s unconscious sense of doubt.

In one of the better scenes, Stone even ribs Box about his initial hesitance to drop the hammer and charge Naz—and there is a lovely, if not quite camaraderie, then at least warmth in their mutual antagonism. If Box has been defined by his unfussy devotion to his job, then Stone has been pegged as flim-flam man with a J.D. (Stone smiles sadly when he spots one of his own ads on the subway; his tagline, “No Fee ‘til You’re Free,” suggests that he shares an ad agency with Saul Goodman). Yet, when almost every other character—from the D.A., to the judge at Naz’s bail hearing, and even Box—hears that he has taken Naz’s career-making case, they can’t help but smile and say, “good for you.” There’s a palpable admiration, even respect, for him, despite the Goodman-esque ads and the eczema-scabbed feet; and his vigorous, intelligent defense of Naz at the bail hearing suggests that this respect has been well-earned. Sure, Stone is quick to find a cameraman outside the courthouse, but the fire in his words isn’t just flash for the six o’clock news.

In this episode we discover, quite casually, that Stone has a son who is only a few years younger than Naz, and, who, like Naz, has brown skin in a piercingly racist world. There is nothing overtly paternal in Stone’s scenes with Naz (and his interactions with Naz’s parents are perfunctory and clipped), but, after watching Stone send his son out into the world, one can’t help but see a subtle protectiveness in his interactions with his client—even though he knows that this protectiveness won’t save the poor kid from the bureaucratic chaos of the prison system, or a media determined to smear him as the exotic brown killer of a pretty white girl, still, he tries. And even this trope, the crusading lawyer who is too close to his case, is the absolute staple of the prime-time drama. But that’s the thing about "The Night Of"—it breaks your heart just inside the rules.

Hbo Recap The Night Of