The RNC's pop-culture wasteland: This Republican convention is seriously lacking in star power

Heavy hitters in Cleveland are Kid Rock and Scott Baio, who pale next to former RNC stars like Clint Eastwood 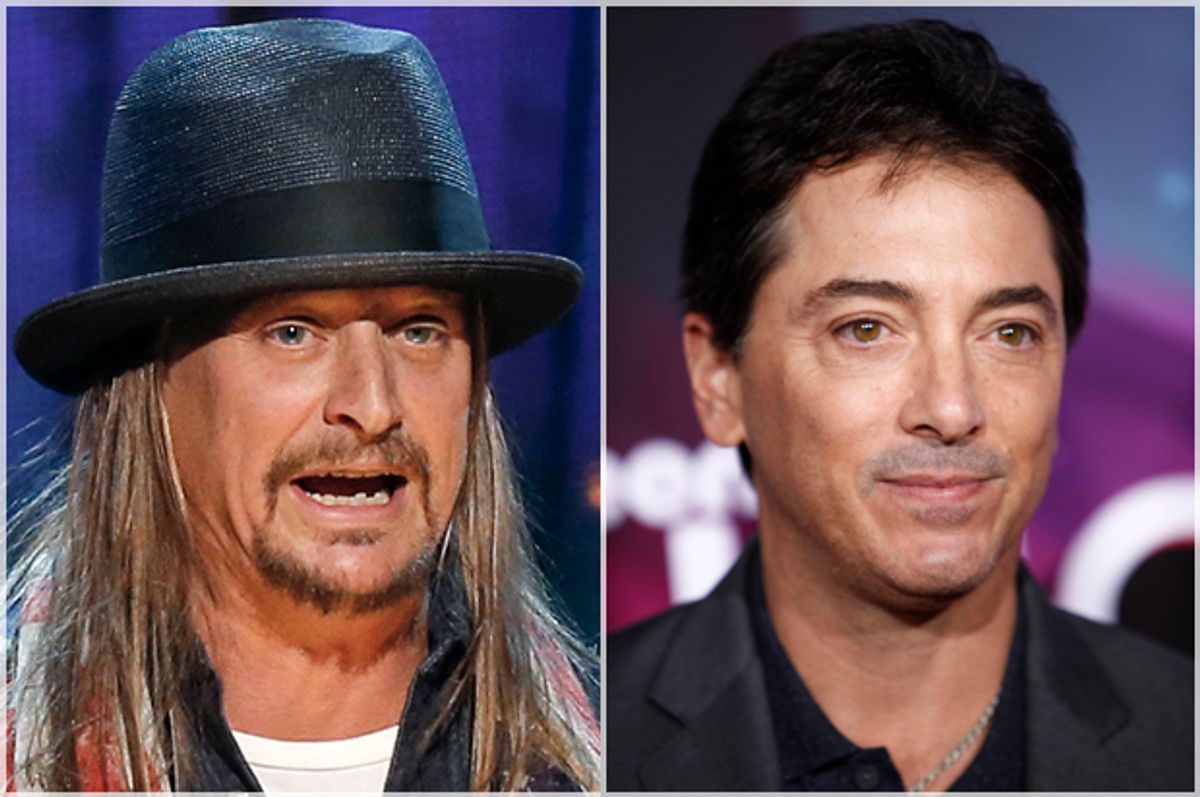 Entertainment and cultural figures are typically part of the political conventions both major parties put on. Culture can distract people from boredom, make them temporarily happy, and allow a party to define itself. This year, the GOP has chosen an electric guitar, inspired by the rock hall of fame, as part of its convention icon. But finding musician and actors who support the party’s likely nominee, Donald Trump, can’t be easy. The proof is that the big time talent this year seems to be pretty underwhelming.

So alongside the usual array of generic we-love-the-USA country bands, soap stars, the Cleveland bash includes the aggressive white rock-rapper Kid Rock and “Joanie Loves Chachi”/"Charles in Charge" star Scott Baio. (Country star Martina McBride, who is conservative but not particularly provocative, will perform as well.)

Kid Rock actually performed Sunday — along with Lynyrd Skynyrd — at a private concert. Rock is a Trump supporter who loves the Confederate flag, a symbol that Skynyrd has a decades-long relationship with. Whether the band and the rapper are racists is hard to say, and Skynyrd has probably been unfairly tarred with that brush. But they both have white supremacist followings. And Kid Rock goes out of his way to say offensive things about women and other musicians.

Over all, if the GOP establishment is trying to make this convention more moderate and civilized than their likely nominee, they are either not trying very hard or they are not in much control of the symbolism in Cleveland right now.

The arrangement with Baio is worth looking at. Many of us who grew up watching “Happy Days” have a place in our heart for the actor for the charismatic and light-hearted Chachi character, even if his ensuing shows are among the weakest of all ‘80s television.

Trump is either desperate for celebrity cred, or a genuine fan, because here is how the booking went down: "I was at a fundraiser for Mr. Trump the other night with my wife and he invited me to speak at the convention, which was completely unexpected and out of left field," Baio has said. "He had given a speech and he was walking out. I looked at him and said, 'Mr. Trump, Scott Baio,' and he goes, 'Oh my God.' And he said to me, 'Did you want to speak?' And I went, 'Here?' And he goes, 'No, no, no, at the convention.’"

Baio clearly disdains both Barack Obama and Hillary Clinton, and he shares Trump’s appetite for destruction. "It's very simple, because when [Trump] speaks I understand him," Baio said of his support for the mogul. "He speaks like I speak, he communicates with people very well. I want him, as any one person can do, to go into Washington and blow it up."

Given the amount of literal American violence over the last few years, you’d think people speaking publicly would be a bit cautious about endorsing metaphoric violence.

But in any case, what’s most striking is that Baio is so much less substantial than previous GOP convention celebrities. Say what you like about the politics or personal behavior of Arnold Schwarzenegger (who spoke in 2004) or Clint Eastwood (who addressed an empty chair in 2012). The former served as governor (not terribly well) of the nation’s most populous state, and acted (badly, but still) in numerous films. The latter served as mayor of Carmel, acted in some of the greatest films in history, and has become a major director by any measure.

With Baio speculating on Fox recently that Obama may be “a Muslim sympathizer” and that he and Clinton want to “totally eliminate the United States,”tonight should be worth watching. In the best of all worlds, the actor will reprise his role from “Bugsy Malone” and show us all what a tough guy he is.