"Campaigns against Gaza are a continuation of a campaign against all Palestinians": The directors of "Gaza in Context" on their new film

Noura Erakat and Dia Azzeh discuss their documentary, BDS, and the challenges of forming a counter-narrative 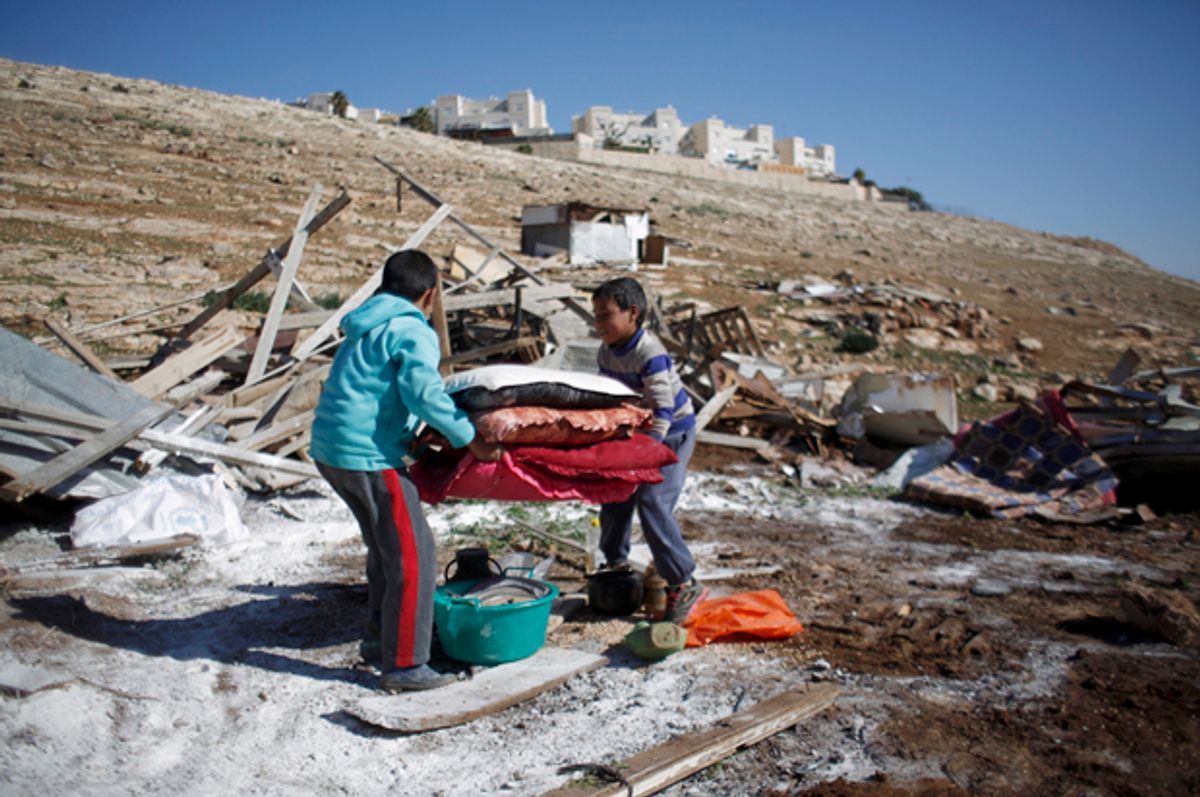 Two years ago, the world witnessed Israel’s massive and brutal assault on Gaza. According to the World Health Organization, the attacks injured 11,000 Palestinians, killed 2,130 (including 551 children), destroyed or severely damaged 18,000 homes and buildings—including hospitals and schools—and displaced 100,000 Palestinians.

One of the most powerful military forces in the world did so through the use of warships, drones, missiles, one-ton bombs, and hellfire missiles, many paid for by U.S. taxpayers — we contribute more than $3 billion a year to Israel’s “security.”  All this military might was aimed against a captive people under occupation.  To put this in perspective, U.S. aid to Israel already comprises 53% of our total military aid to all the other countries in the world.  And now the Obama administration is considering increasing this amount even further in what it calls “the largest pledge of military assistance to any country in U.S. history.”

Given this, it is more urgent than ever to learn about what we are funding, and enabling, with this massive outlay of funds.  A newly released film, “Gaza in Context,” helps us understand both the history behind the attacks and also the implications of Israel’s policies toward the Palestinians.  The film is intended to make a critical intervention in the struggle to present the Palestinians fairly.

Since the assault broke out in 2014, there has been an increasingly heated battle over the narrative on in Israel-Palestine.  On the one hand, during the attacks protest over Israel’s actions erupted in both large global metropolitan cities and small provincial towns.  This is captured vividly in a global Tumblr feed, “The World Stands with Palestine,” where ordinary people from around the world uploaded photos of the demonstrations taking place in their hometowns and voiced their condemnation of Israel and their sympathy for the Palestinians.  On the other hand, as world sentiment has gradually shifted toward the Palestinians and more support conferred to the non-violent tactics of Boycott, Divestment, and Sanctions, supported by artists, activists, trade unions, and religious groups, the state of Israel and its supporters have mounted a massive campaign to intimidate, harass, and silence critics of Israeli state policies and actions.

In Israel we find attacks on human rights NGOs and the beginning of what one Israeli minister called “targeted civil eliminations” of dissenters and activists.  Here in the United States casino magnate Sheldon Adelson convened a high-powered summit in Las Vegas to fight BDS; the Koch brothers channeled money into the effort; politicians like Andrew Cuomo and Hillary Clinton have used the power of their offices and their public prominence to attack BDS; and current and former heads of academic institutions like Janet Napolitano and Larry Summers have acted in collusion with outside organizations to squelch free speech on U.S. campuses.

Pushing back against these efforts to silence dissent and distort the reality of what is happening in Israel-Palestine, in a clear and compelling manner “Gaza in Context” explains not only the events of the summer of 2014, but also the historical and political circumstances that are necessary to any real understanding of what is going on. The film is meant not only for a broad general audience, it also forms the centerpiece of a pedagogical project that includes a teaching guide for use by educators, a bibliography for use by researchers, and a compendium of Jadaliyya articles featured in a JadMag. Together these resources are part of a larger research project of the Arab Studies Institute.

Using a direct address to the viewer, blended with graphics, photos, and archival footage, in its 20 minutes “Gaza in Context” serves as a concise and eminently lucid representation of the struggle for Palestinian rights.  Two of its key take-away points are these:

Whereas the violence in Gaza during the 2014 attacks has largely been attributed to Hamas’ rockets, the film-makers ask a series of questions that force us to think of the broader context:  “If Hamas didn’t launch its first rocket until 2001, nor its first suicide attack until 1994, then what explains an ongoing conflict for nearly 7 decades? If Hamas was not established until 1988, then why has Israel occupied the Gaza Strip since 1967?”  The film goes on to state, “Even if Hamas were to disappear, Israel’s policies towards the tiny coastal enclave would go uninterrupted. What Israel demands is for Palestinians to accept Israeli domination as a way of life — an unfathomable possibility to all humans whose first instinct is to be free.”

A second crucial issue that the film addresses is the difference between Israel’s actions in the West Bank compared to Gaza — What accounts for the difference in Israel’s stance toward the West Bank and Gaza?  Why is it willing to essentially destroy Gaza?  How can we possibly see the two as part of the same project of colonization?  The film asserts:

Israel wants the West Bank. Its religious claims there are more pronounced. It desires control of the Western Aquifer, one of the most significant sources of water in the region; and it wants to control the easternmost border –the Jordan Valley.

In contrast, Israel does not want the Gaza Strip. (At least not anymore.) By 2005, Israel only had 8,000 settlers in the Gaza Strip compared to 400,000 in the West Bank. It considers Gaza a cancer.  The Strip has always been a hotbed of popular resistance, well before the establishment of Hamas. Israel has repeatedly tried and failed to suppress the population using violence as well as cooptation strategies.

This helps explain the particular brutality of Israel’s treatment of the land and people of Gaza —i t has little to lose in transforming it into a dead zone, a token of its will to power and its amorality.  Defenders of Israel say that it gave control of Gaza over to the Palestinian Authority in 2005, but again this claim is entirely disingenuous, or willfully deceitful.  For Israel has maintained an illegal blockade of Gaza since 2007 that is part of its overall control of the territory, including control of all ingress and egress of goods and people as well as the sea port and the air space—Israel is in fact not only still controlling Gaza, it is maintaining a stranglehold that will, according to the World Health Organization, render Gaza “unlivable” by the year 2020.  Hence the urgency of this film’s release.   The world is witnessing a human catastrophe unfolding. We must understand the causes and consequences of this project of annihilation so that we might better work to fight against this planned destruction.

I asked the two directors of the film project to talk about what motivated them to make the film and what they sought to accomplish.  Noura Erakat is a Palestinian human rights attorney, activist, and writer. She is currently an Assistant Professor at George Mason University and a Co-Founding Editor of Jadaliyya.com. Dia Azzeh is a Palestinian filmmaker and animator. He works as a freelance artist on several projects, mainly in Belgium and Palestine.

You both already make prolific interventions in writing and film- what made you want to make this film?

In the summer 2014, we witnessed Israel pummel Gaza’s captive population for the third time in a span of 6.5 years and although mainstream media was finally beginning to skeptical about its military campaigns, the most radical narrative that commentators offered was, “Israel went too far this time.” They never interrogated the situation more deeply and we felt that this was a missed opportunity to shift the framework to highlight Israeli settler-colonial practices and demonstrate how the campaigns against Gaza are a continuation of a campaign against all Palestinians. We didn’t initially intend to make a film — we wanted to create a resource to help provide that framework that was both accessible and thorough; it organically developed into a pedagogical project that included a short narrative multimedia documentary.

What were you trying to accomplish?

This pedagogical project is an attempt to reframe the issue in order to place greater emphasis on the broader question of Palestine and to explain Israel’s policy towards the Gaza Strip in that context. This effort is part of a larger research project on Palestine headed by the Forum on Arab and Muslim Affairs at the Arab Studies Institute. Operation Protective Edge, and any past or future Israeli onslaughts, should be read within this framework in order to highlight the abnormality of the Palestinian condition and to help realize a viable and just alternative. We hope that educators use this as a resource within the classroom and that community organizations, activists, and individuals show and discuss this film in many venues, especially when considering taking a stance on Palestine.

The film is based on a tremendous amount of research and so there are many different vectors that we could not adequately highlight. That is why we also developed a teaching guide for each of the four parts, a bibliography featuring 105 sources, as well as a compendium of relevant Jadaliyya articles in what we call a JadMag. We also provide the script itself for reference.  We hope that the film is the beginning of an educational journey.

Why is it so hard to get these sorts of representations out there?

There are a lot of reasons - among them is the fact that the media itself is quite politicized and inserting a Palestinian narrative has been a primary challenge. Featuring Palestinians to speak for themselves on mainstream media is actually only a recent breakthrough and has still not become the norm. We are not trusted to narrate our own stories but instead have to rely on non-Arab and Muslim allies verify our truth. Repressing Palestinian voices is such an endemic condition and it reflects the general dehumanization of Palestinian lives. In the worst cases, our critique of Israel’s state practices that aim to diminish, marginalize, and erase our communities are equated with anti-Semitism. This accusation has significant professional, personal, political, and social ramifications as demonstrated in countless recent and historical examples of individuals and institutions.

What can ordinary people do to help the Palestinians?

Change depends on ordinary people. States and diplomats have been unwilling or unable to shift this condition for decades. In the United States, ordinary people are part of the problem as they are funding these atrocities in the amount of at least 3 billion USD annually in military aid to Israel. These are our tax dollars and we have a right to demand that that money is not used to subsidize the systematic abuse of Palestinian human rights. In 2005, Palestinian civil society called on allies globally to join the boycott, divestment, and sanctions movement to help with an effort to highlight Israel’s abuses and to pressure it to dismantle its racist regime in the same that the divestment movement during the eighties did towards Apartheid South Africa. Ordinary people are the key to ending these atrocities.