Dispatch from the Cleveland lions' den: What I learned at a Donald Trump rally

If there's a thread to Trump's incoherent message, it's that America sucks and Democrats are to blame 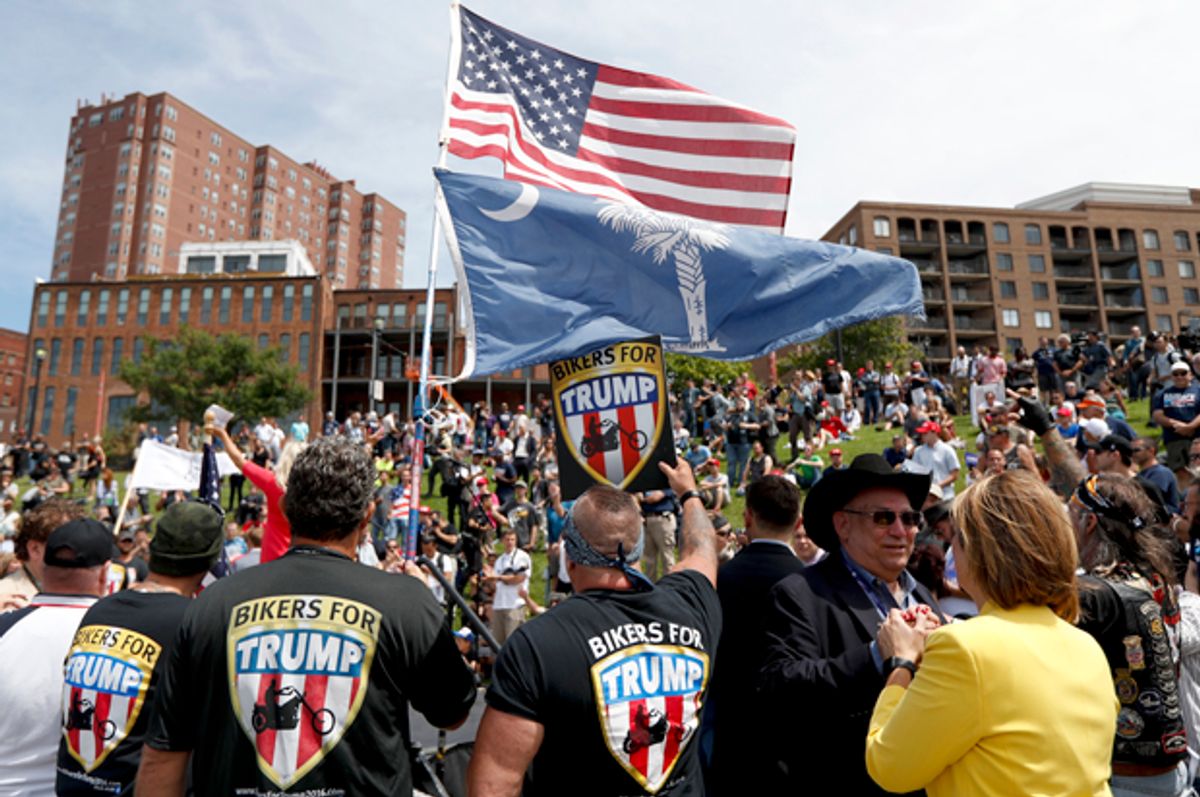 Members of the group Bikers for Trump watch during a rally for Donald Trump at Settlers Landing Park, July 18, 2016, in Cleveland. (AP/John Minchillo)
--

CLEVELAND - The more you listen to Trump supporters, the more you realize his candidacy isn't about policy or even politics in the conventional sense. It's a nebulous cultural reaction. Pundits have been perplexed at how effective Trump is without saying anything concrete or specific. But this is less perplexing when you talk to people voting for Trump, and when you pay attention to the rhetoric of politicians following his path.

At a pro-Trump rally just outside the Republican convention on Monday afternoon, I listened to speeches from organizers and other Trump supporters. I listened to them parrot Trump's platitudes. I listened to people like Republican Arizona Senate candidate, Kelli Ward, repeat empty line after empty line, and each time the crowd applauded rapturously. “We gotta put Americans back to work,” Ward said. “We've gotta bring God back into the country...We've gotta bring economic freedom back to America.” At one point she said: “We've gotta make America healthy again by repealing Obamacare.” The only one of these lines that flirted with specifics was the last one, but of course it made no sense. Millions more Americans now have health coverage because of ObamaCare; ending it may yield benefits, but it won't make those people any healthier.

But these are questions no one in the audience cared about. Just as no one bothered to ask “How are you going to bring those jobs back?” or “What exactly do you mean by economic freedom”? That requires peeking past the cliches and dealing with the complexities of the real world, and that's not as fun as blind rejectionism.

Ultimately, this rhetoric, like Trump's entire campaign, is a banal signifier that dog-whistles change to audiences disposed to hate the direction of the country. If there's a connective thread linking Trump's otherwise incoherent message, it's that America sucks and Democrats are exclusively responsible for that suckiness. Importantly, this movement is not fundamentally a Republican one. This is all about Trump and the sweeping repudiation of the system he claims to represent.

I bumped into a strangely dressed man at the rally, for example, and I asked him a few questions. His name was Thomasio Vendetti and he claims to have founded a Facebook group called “Catholics for Trump.” I wanted to know why he was here, what it was about Trump that appealed to him, and whether he was a Republican in any meaningful sense. His answers were both revealing and unsurprising.

Vendetti said he was there because “Donald Trump is going to defend my right to free speech as a Catholic in this country...He said he'll protect Christianity.” If you're wondering what that means, you're not alone. In what way is this man's “right to free speech” under attack, and why on earth would he think Trump is going to be a great defender of Catholics? Trump is scarcely religious at all, and when he pretends to be more than that, he says things like “Two Corinthians.” After unsuccessfully pressing him for specifics, I finally asked Mr. Vendetti whether considers himself a Republican or whether this is all about Trump. “All about Trump,” he said. He couldn't offer a compelling justification for this; he just knew Trump was his man.

And he wasn't alone.

As my colleague Amanda Marcotte noted, this rally – like much of the pro-Trump rhetoric I've heard in Cleveland – has little to do with conventional Republican themes and more to do with the “fringe right.” At rallies like this, one discovers few traditional Republicans but plenty of open-carriers decked out in “Infowars” t-shirts. These people are awash in conspiracy theories and are distrustful of all things government, including Republicans. To them, Trump is sledgehammer. They've no idea what he'll do, but they're convinced he'll explode the system. There really isn't a positive agenda to be found anywhere.

And I was reminded of this every time there was a lull at the rally. Whenever a speaker or audience member detected an awkward pause, they would yell “Hillary for Prison” and the crowd would promptly play along. That's what this was about at the end of the day. I doubt most of the people here could agree on what they think ought to be done, but everyone shared a vague negation – of Clinton, of Obama, of the state. Hence you only get coherent answers from Trump supporters – at least the ones I spoke with here – when you ask them what they're rejecting.

Beyond that, you get blank stares and confused expressions. It's as though no one has considered what's next. Take the country back first, I suppose, and then worry about fixing it later.