Protesters from CODEPINK, Black Lives Matter, 350.org, the IWW and more traveled from around the country to the RNC 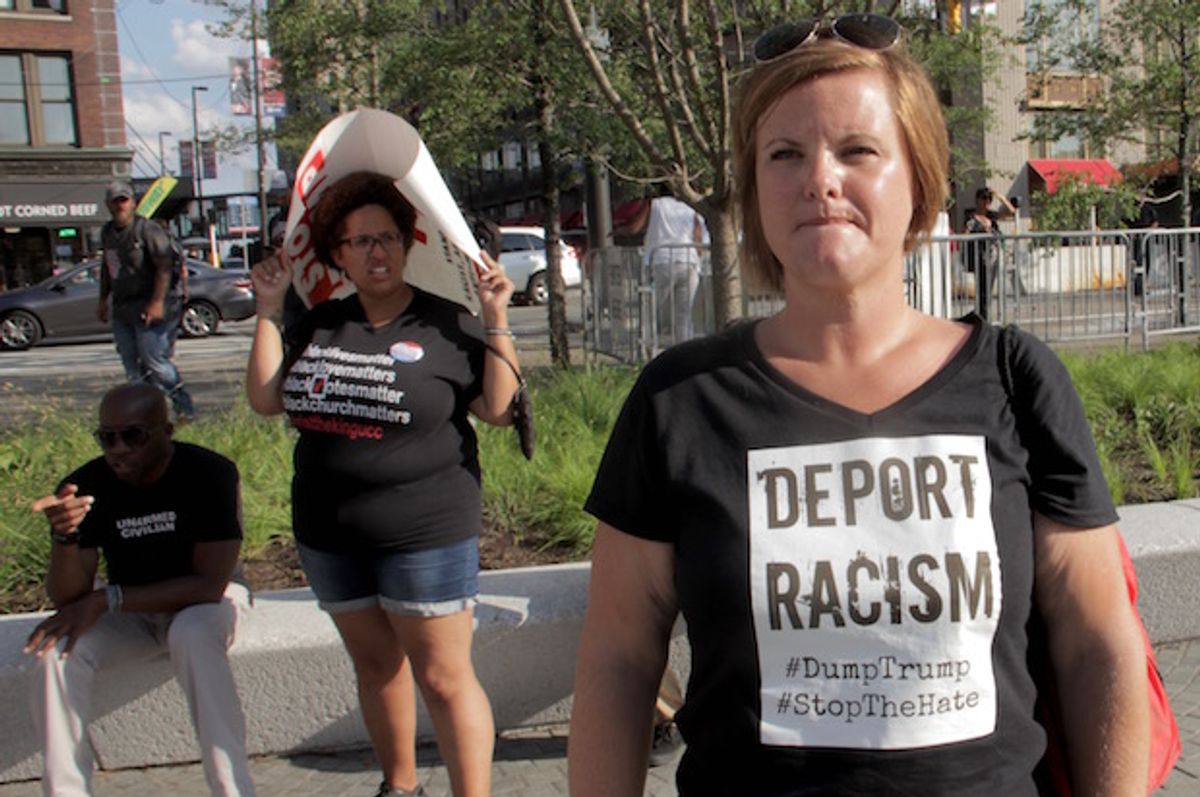 The 2016 Republican National Convention has taken over Cleveland this week as 50,000 conservatives from across the nation convene at the Quicken Loans Arena to anoint Donald Trump.

Protesters from numerous groups throughout the country disrupted and protested the convention, bringing anti-racist, anti-war and environmentalist messages.

Just before Donald Trump himself spoke on Monday night, two activists from the women-led anti-war group CODEPINK disrupted the RNC from the inside.

McCracken was on the ground floor. She held a banner and chanted "Trump's hate makes us less safe!" She also shouted, "Stop Trump's Islamophobia!" and "Stop Mike Pence's war on women!"

Subsequently, Byers unfurled a banner reading "refugees welcome" on the level above.

Giuliani stopped his speech. The crowd began chanting "U-S-A! U-S-A!" and Giuliani repeated three times, "It means we're getting to them!"

"I spoke out during the RNC because the GOP's Islamophobia and racism have no place in our country, and especially not in the White House,” McCracken explained after the action.

“We cannot stand silent as Trump and his supporters continue to spread hateful rhetoric that leads to violence and war. I want to live in a country that is based on diversity and compassion, not racism and hate."

A contingent of activists from Ferguson, Missouri, the birthplace of the Black Lives Matter movement, also protested outside the convention in Cleveland's Public Square.

Alicia Street, a Ferguson activist, told Salon, "I am supporting my people who dislike Trump as much as I do."

Street warned Trump is a dangerous candidate who stirs up hate and "incites riots."

Emily Davis, another Ferguson activist, told Salon, "It's my responsibility as a white person to stand against the racism Trump represents."

Davis emphasized that Trump's campaign is built on racism and she had to speak out against it. Activists from the environmental justice group 350.org scaled 60-foot flagpoles outside of the Rock and Roll Hall of Fame during the RNC on Tuesday and displayed a 625-square-foot banner reading: "Don't Trump our communities — Ban fracking. Tear down the wall. Stop climate injustice."

Four protesters participated in the action. They linked the environmentalist, immigration justice and anti-racist movements together in their demonstration.

"Communities directly impacted by oil and gas extraction have come together with immigrant communities being torn apart by deportations to take a stand against an unjust system that targets us all,” said Emmelia Talarico, an activist from Maryland, in a statement issued by 350.org after the surprise action began.

“Through the power of direct action, our movements can and will stop the hateful rhetoric of Donald Trump, and continue to push Hillary Clinton to ban fracking and stop the deportations,” explained Shane Davis, a protester from Colorado who was forced to leave his home because of damage caused by fracking.

“We must remember that fracking often targets low income communities of color, often many of which are immigrants such as the Central Valley of California, where over 95 percent of fracking occurs in California,” Davis added.

“We cannot stand by and accept a political system in which both candidates support the toxic fracking industry, and one candidate freely uses violent racialized language against immigrant communities.” Another contingent of activists were from the Industrial Workers of the World, or IWW, a century-old revolutionary socialist union.

A young member who identified simply as Robert said Trump is tapping into the "racist, far-right populism" in U.S. society, which he warned is growing.

Robert spoke highly of Jill Stein, the Green Party presidential candidate. He applauded the party for adding an anti-capitalist position to its platform.

The protester also commended the socialist European parties Die Linke, from Germany, and Podemos, from Spain.

Robert said there were some good things about Bernie Sanders, but stressed that Sanders is far from perfect.

"Bernie wasn't the be-all and end-all," Robert told Salon. "He built a huge movement that I really wish he took outside the counterrevolutionary Democratic Party."

Approximately 20 Wobblies (the term used for members of the union) came from other cities in Ohio to protest at the RNC.

The IWW was once very powerful, but was systematically destroyed by the U.S. government during the First Red Scare, with the passage of the Espionage Act and the Sedition Act during World War I.

Another Wobbly held a sign reading, "No war but class war!"