The ghouls have won: The first night of Donald Trump’s RNC was a political death cult

Last night was a clinic in the enduring hold that authoritarianism, racism, and fear has over GOP voters 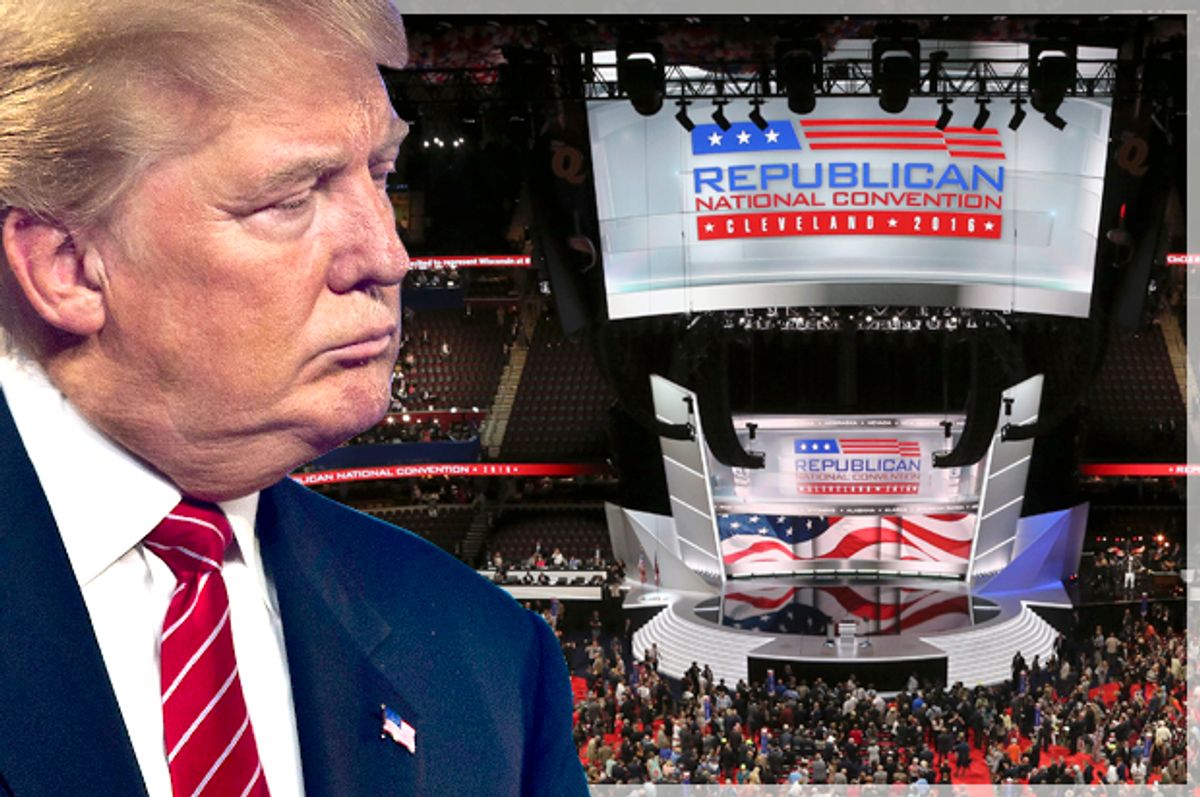 In an earlier essay here at Salon, I described Donald Trump’s campaign as a political death cult. The first night of his coronation in Cleveland as the presumed Republican 2016 presidential nominee confirmed my observation to the extreme.

The Republican National Convention’s theme for Monday was “Make America Safe Again.” In order for Donald Trump to best remind Republicans of how he will supposedly save them from harm, Trump had to inflame a state of existential terror among both the attendees in the venue, as well as likely supporters viewing at home.

Trump and his surrogates did this by repeating several themes.

Barack Obama and Hillary Clinton are either incompetents at best or traitors at worst. The two of them wish to do harm to “real America.”

“Illegal immigrants” from Mexico and other parts of Latin and South America come to the United States in order to rape, kill, and murder (white) people.

America’s police are under existential threat from organizations and movements such as “Black Lives Matter”. By implication, the country’s cops will not be able to keep the “silent majority” safe from “those people,” i.e. black and brown folks whose primary reason for existence is to prey upon, loot, rob, and kill good white Americans…unless Donald Trump is elected president.

Black conservatives played their role perfectly during Monday night’s parade of pain and fear. They were the “professional best black friends” for the Republican Party and served their assigned roles as mouthpieces and human puppets for white racial animus and bigotry towards non-whites.

Former New York City mayor Rudy Giuliani was in a near-apoplectic state as he channeled the energy and anger of the late right-wing hate talker Morton Downey Jr..

And in one of the most disturbing, uncomfortable, and low points in recent American politics, Donald Trump featured Pat Smith, the still grieving and emotionally distraught mother of intelligence analyst Sean Smith who died in the attack on the American consulate in Benghazi.

The attendees at the Republican national convention have no interest in the truth. They were enraptured by Pat Smith and her conspiratorial fantasies about Hillary Clinton and how the latter should be put in jail for committing de facto "murder" at Benghazi.

This pattern of sick and ghoulish behavior should not be a surprise. During the 2012 presidential primaries, Republican audiences cheered when the death penalty was discussed. This same public booed and heckled a gay man who was in the United States military. The 2016 Republican primaries featured discussions where Donald Trump and other candidates debated the appropriateness of torturing and killing the family members of Islamic terrorists. Donald Trump even went so far as to brag about being able to kill a person in the street and not be punished because of his popularity with the “American people.”

In total, the first night of the 2016 Republican National Convention was a clinic in the almost irresistible hold that authoritarianism, racism, and fear has over the GOP’s voters. The election of Barack Obama as the country’s first black president, twice, has amplified such feelings to a mania and panic.

As Donald Trump walked out at the end of the convention to the band Queen’s immensely popular song “We are the Champions”--with effects provided by a smoke machine and back lighting--I thought immediately of cultural theorist Guy Debord’s concept of the “spectacle”, and what it tells us about celebrity culture and interpersonal alienation in a society organized around consumer capitalism:

Stars — spectacular representations of living human beings — project this general banality into images of permitted roles. As specialists of apparent life, stars serve as superficial objects that people can identify with in order to compensate for the fragmented productive specializations that they actually live. The function of these celebrities is to act out various lifestyles or sociopolitical viewpoints in a full, totally free manner. They embody the inaccessible results of social labor by dramatizing the by-products of that labor which are magically projected above it as its ultimate goals: power and vacations — the decision-making and consumption that are at the beginning and the end of a process that is never questioned. On one hand, a governmental power may personalize itself as a pseudo-star; on the other, a star of consumption may campaign for recognition as a pseudo-power over life. But the activities of these stars are not really free and they offer no real choices.

Donald Trump is a very dangerous presidential candidate for a number of reasons. Most importantly, he is a proto-fascist. Trump is also extremely unqualified in terms of the emotional temperament, intellectual curiosity, and policy knowledge necessary to be an effective president of the United States.

But Trump’s real power (and thus, danger to American politics) comes from how the so-called smart people in the commentariat have tried to make sense of a campaign that is, on a fundamental level, just a celebration of buffoonery, stupidity, and bigotry. Unfortunately, there is no singular voice such as that of Walter Cronkite or Edward R. Murrow with the courage to publicly and plainly state that Donald Trump’s presidential campaign is an exercise in bovine scatology.

Donald Trump is one step away from being President of the United States of America because of this fact. The American corporate news media has elevated Donald Trump to the level of being a serious presidential candidate when they should have instead thrown him into the political dustbin many months ago.