“The Mistake on the Lake": What Trump and the GOP could learn from Cleveland 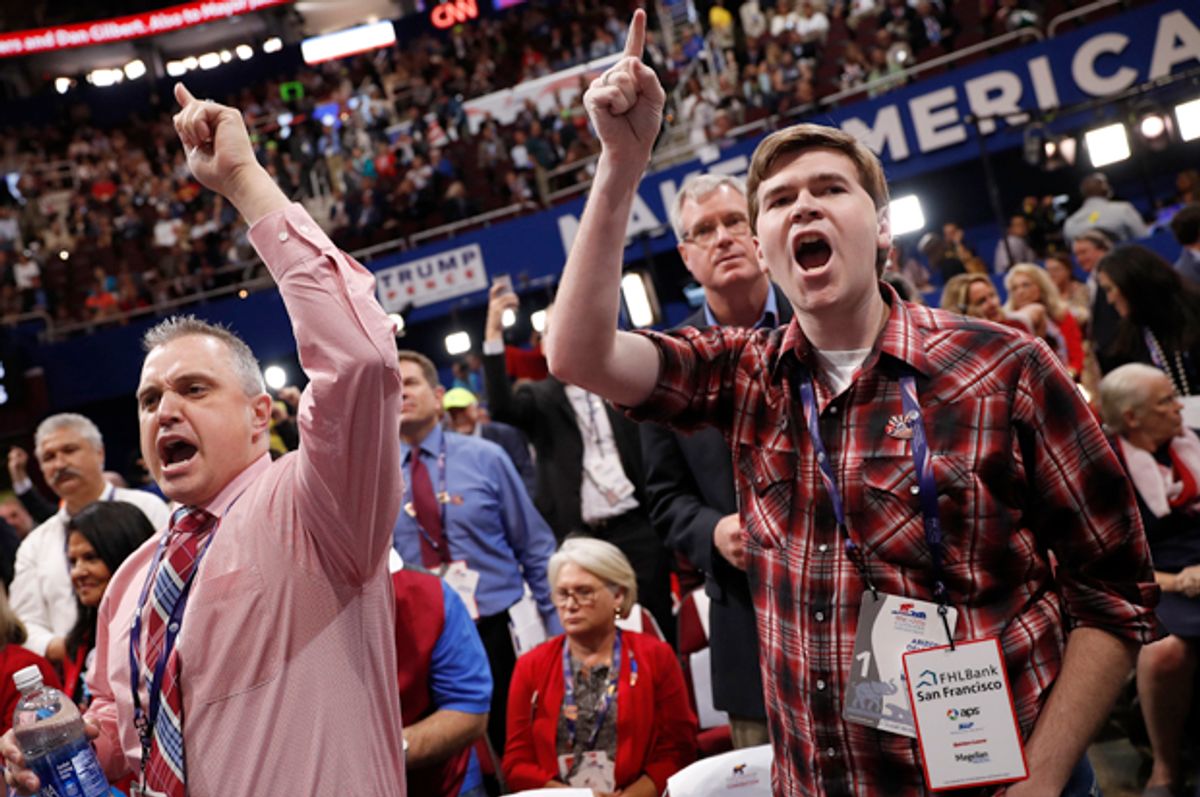 Delegates yell after the temporary chairman of the Republican National Convention announced that the convention would not hold a roll-call vote on the Rules Committee's report and rules changes and rejected the efforts of anti-Trump forces to hold such a vote, Cleveland, July 18, 2016. (Reuters/Mark Kauzlarich)
--

When Donald Trump’s 24-karat-gold-laden jet touched down in Cleveland this week, the GOP nominee found a long-embattled city undergoing an uncertain transformation.

Derided for years as “The Mistake on the Lake,” Cleveland is often used as a synonym for urban decline. In 2016, it ranked as the most distressed big city in America. However, Ohio’s second-biggest urban center (Columbus now has more than twice the population), located in one of the most important swing counties in the country, is a tale of two cities: one represented by an increasingly vibrant downtown and a growing knowledge economy and the other, a hollowed-out collection of neighborhoods increasingly left behind.

Two years ago, after his party chose Cleveland over Dallas for its national convention, Republican National Chairman Reince Priebus described Cleveland as “a city on the rise.” It seemed an unlikely sobriquet for a city that, with 390,000 residents, is less than half the size it used to be, and an improbable location for the party to launch a quest for the White House after eight years out of power.

But Cleveland is representative of the struggles facing many Rust Belt cities in key swing states, and it symbolizes much of the promise and peril for both parties, neither of which has formulated an extensive urban policy for an America increasingly driven by urban economics. For the Republicans especially, the importance of reaching a growing base of urban voters is critical for the party’s future relevance.

At its peak population of more than 900,000 in 1950, Cleveland was the country’s seventh-largest city and represented the upwardly mobile working class of midcentury America. Starting in the 1960s, however, deindustrialization and suburbanization began to unravel the urban core. By the 1970s, Cleveland trailed only Newark, N.J., in terms of urban decline. While the city defaulted on its debt in the late 1970s, local organized crime bosses actually plotted the assassination of beleaguered Mayor Dennis Kucinich. The city seemingly had hit bottom.

Over the next 20 years, a series of public-private partnerships bolstered the area and pulled it from the flames of urban crisis. Yet Cleveland still faced a “quiet crisis” by the early 2000s — industrial decline and continuous outmigration.

Today, thousands of new residents live downtown. An “eds and meds” sector is powering new job creation, and many once forlorn neighborhoods are home to young millennial professionals and trendy microbreweries.

“You have these little pockets of knowledge economies that are growing,” noted Richey Piiparinen, director of the Center for Population Dynamics at Cleveland State University. “But this whole idea of getting better and worse at the same time, it’s true. Our [census] tracts of concentrated poverty are growing, just like our tracts of educational attainment, income and real estate appreciation are growing.”

Only a few miles from the convention at Quicken Loans Arena, the predominately African-American neighborhood of Hough symbolizes a Cleveland beyond the trendy bars and downtown lofts. Between 1950 and 1960, Hough went from being 95 percent white to 74 percent black. In 1966, six nights of riots rocked the neighborhood, leaving four dead. The area has yet to recover. In a strange irony, the convention is set to begin on the 50th anniversary of the riot. And in that past half-century, the Republican Party has increasingly lost touch with the country’s urban centers.

In 2013, Sen. Rand Paul introduced the Economic Freedom Zones Act of 2013. Designed to reduce tax and regulation burdens in order to spur reinvestment in municipalities, it represented one of the few Republican efforts to engage with urban policy since the late Rep. Jack Kemp (R-NY) pushed the similar urban enterprise zones concept in the 1980s. Paul travelled to Detroit several times before and during his ill-fated campaign, but few other Republican candidates said anything about urban issues.

That failure is bipartisan, according to urban studies theorist Richard Florida. “When was the last time you heard a national politician even utter the word ‘cities’ or ‘urban policy’? They’ve barely been a footnote in the current presidential debates.”

Cities like Cleveland certainly haven’t received much attention from federal urban policy since Lyndon Johnson’s “Model Cities” program of the late-1960s. There should be plenty of room for the GOP to challenge Democratic dominance in urban centers, but the Republicans are failing to compete for votes in America’s largest and even mid-sized cities — instead, they’ve completely missed out on the growing share of the electorate, especially young people, concentrated in urban areas.

Trump started his career and made a fortune during a struggling period of transformation in New York. He of all Republican candidates in recent memory should understand the concerns of urban voters. Yet he’s mirrored the party by failing to engage. But what does Trump’s party offer urban voters? Not much, judging by the recently unveiled party platform.

Nor has Trump received much help from the Ohio Republican Party. Gov. John Kasich’s state tax cuts have led to a series of financial crises for cities. Cleveland is losing an estimated $21 million annually due to the budget cuts made by the Republican governor and Republican-controlled legislature. The impact on Cleveland could be severe, according to Piiparinen. “Cleveland is at a teetering point,” he said, “and $30 million would go a long way in basic services, crime reduction and schooling.”

Cleveland today represents many of the problems facing post-industrial cities — it also symbolizes the vastly uneven nature of the American economic recovery. While both political parties have neglected these issues, it’s the Republicans who stand to lose the most.

In the last presidential election, Republican nominee Mitt Romney received no votes in 16 of Cleveland’s precincts. He lost the city and surrounding Cuyahoga County — along with Ohio itself. The Buckeye State is a must-win for Republicans. Since Abraham Lincoln became the first Republican in the White House in 1861, the party has never won the presidency without winning Ohio’s electoral votes. That was undoubtedly part of the strategy in bringing the GOP’s party to the city.

If Trump is to lead the Republicans to victory in November, however, he needs to do more than just show up in Cleveland — he and the GOP must acknowledge urban issues and urban voters, or face defeat in Ohio and nationwide this fall.