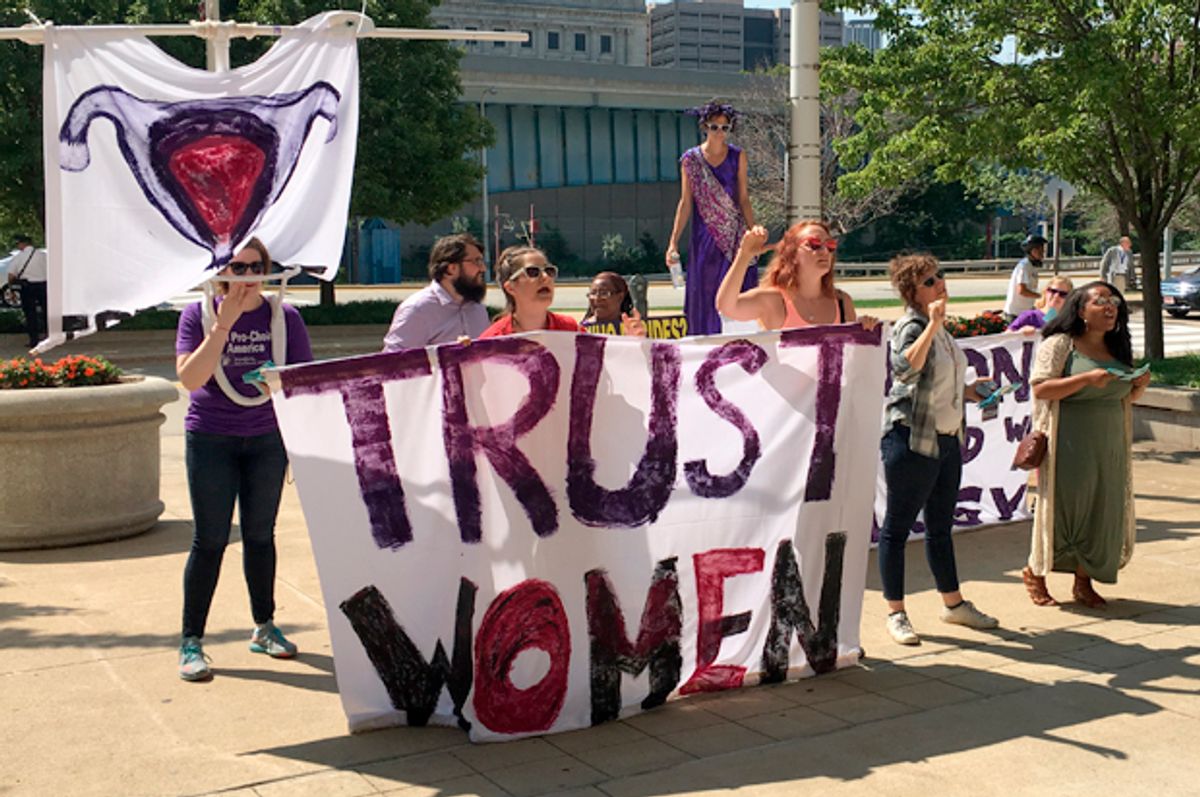 Attendees for the Republican National Coalition for Life Luncheon, held Tuesday at the FirstEnergy Stadium in Cleveland, were greeted with an uncomfortable surprise as they lined up to hear anti-abortion luminaries Phyllis Schlafly and Lou Holtz speak. A group of pro-choice activists from NARAL and Lady Parts Justice gathered around the door, begging the attendees to reconsider going inside.

“Phyllis Schlafly is sort of the Steve Jobs of anti-women, women-hating activities,” Lizz Winstead, co-creator of The Daily Show and co-founder of Lady Parts Justice, explained to me. “So what we thought we’d do today is come on down and do some sidewalk counseling, not unlike what all the people here do on a weekend basis, torturing women who need abortion services.”

The protesters sang hymnals and told the attendees that God wants them to trust women to make their own choices. Attendees were repeatedly warned that they would regret it if they chose to go ahead with this decision to listen to Schlafly’s anti-choice lies.

The dead-on nature of the satire was only highlighted by the presence of a real-life anti-abortion “sidewalk counselor” named Myra Jean Myers, one of a small army of anti-choice women who argue that, because they regret their abortions, the procedure should be banned for everyone else.

“My husband believed the lie, as abortion was being debated in 1973,” Myers explained, of a pregnancy, her 6th, that she aborted 43 years ago. “I was concerned that our marriage was not strong enough to say no to him. But about 90% of marriages are destroyed after abortion!”

(I searched high and low for the source of this statistic and could not find it, even on those anti-choice sites that use shady or even fake statistics. Readers can safely chalk this “statistic” up to the tendency of anti-choice activists to make stuff up.)

Myers handed me some anti-abortion literature, including cards from the Oil & Wine Ministry featuring some right wing efforts at poetry. The attendees at the luncheon were full of praise for Donald Trump, despite his history as a pro-choice libertine.

“Donald Trump has made it very clear he is pro-life,” a woman from Alabama named Suzy, who declined to share her last name, told me. She hastened to explain that the pick of Mike Pence, a more traditional, hard-line religious conservative, made her even more enthusiastic about Trump.

Myers was, if anything, even more excited.

“I was for him out of the 14,” she said of the Republican primary. “Because I knew he had the leadership and that he was a Christian.
Trump claims membership in the Marble Collegiate Church of Manhattan. The church put out a statement agreeing that the Trump family has a history with the church, but that Trump himself “is not an active member of Marble"