Conservatives think their hero worship of cops looks earnest, but it comes across as performative and political 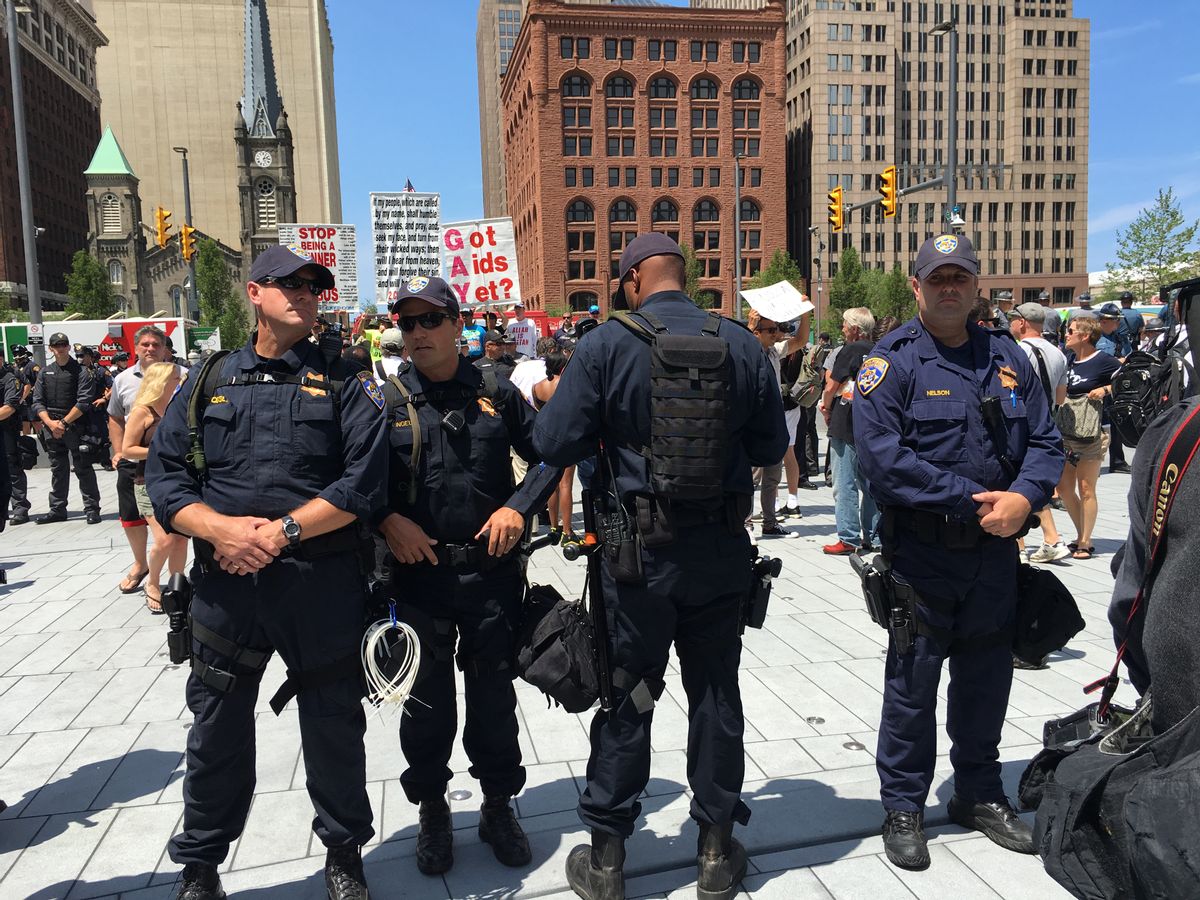 CLEVELAND — It’s no secret that cops are everywhere at the Republican National Convention in Cleveland. Every street corner you turn around, every event you go to, every move you make is attended by dozens of stiff-faced men and women in uniform, exuding a mixture of boredom and authority. They’ve been flown in from around the country to provide security for the RNC, and the relative peacefulness of the proceedings is leaving them with very little to do.

Little, that is, except bask in the newfound — and temporary — status of rock stars they’ve been awarded by the conservative delegates at the RNC.

Everywhere you go in Cleveland this week, you get to enjoy the uncomfortable and newly minted ritual of RNC attendees offering effusive praise to police.

I first noticed it when walking around Sunday night with my colleagues, Ben Norton and Andrew O’Hehir. A line of po-po stood in menacing poses in front of the Phoenix Coffee Shop of beautiful downtown Cleveland, protecting the lattes against exactly no one. Some middle-aged white people rushed over to say, “Thank you for all you do.”

The overwhelming pressure to blubber gratefully in front of police for doing their jobs got to us, and we awkwardly offered our own, “Yeah, thanks, what they said” responses.

It’s not that we are some kind of lefty cop-hating villains. It was just so obnoxiously performative and political. These folks probably don’t thank their maids nearly as ecstatically.

Since then, it’s only gotten worse. The cops can barely walk down the street without being covered in hosannas and hero worship.

This particular tradition, now three days old and likely to only last as long as the convention, reached peak (for now) obnoxiousness in the “Freedom Plaza,"  aka where they serve booze and fast food to convention-goers, on Wednesday evening.

I was trying to eat my bowl of mushroom-covered perogies when a group of state troopers marched by in formation.

You would have thought we were witnessing Beyoncé marching through with a troop of leotard-clad dancers in formation. The Republicans turned to the troopers, applauding so hard their arms nearly fell out of their sockets, letting everyone know they loved the police more than their clearly less patriotic neighbors.

The applause rang out for more than a full minute, giving the troopers the kind of standing ovation usually seen only with "Hamilton" audiences or the Oscar crowd after an accused child molester gets a lifetime achievement award.

The applause reads less as genuine appreciation for the efforts of law enforcement and more as a perverse middle finger thrown at Black Lives Matter protesters. Conservative media has spent months equating protests against police violence and unprovoked killings with opposition to police generally.

In that sense, this reaction isn’t really a tribute to the hard work of law enforcement, but a show of support for being able to kill unarmed people without consequence. The form may be one of gratitude, but the underlying meaning is rather more hateful than that.