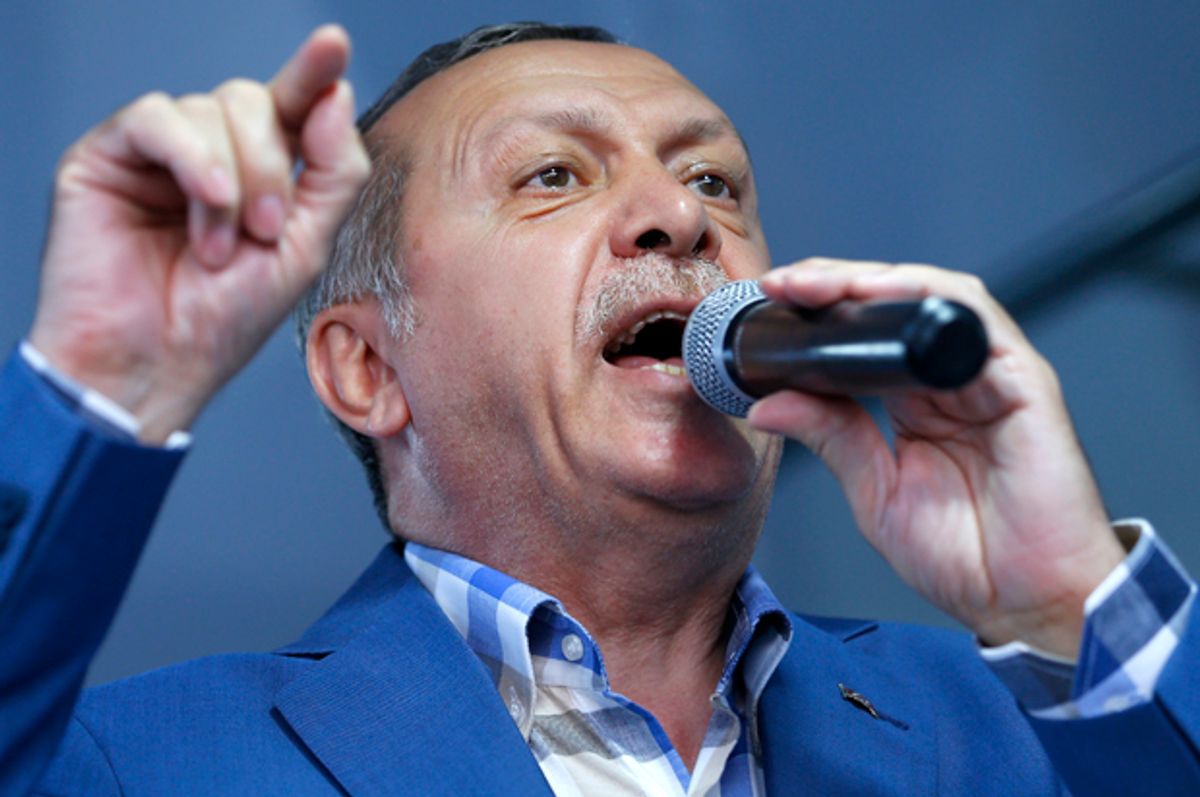 Recip Tayyip Erdoğan has to be the most exotic political figure to come down the pike in who can say how long. “Tinpot” is too good a term for the Turkish dictator. Desperate for a place in the larger-than-life file, he nonetheless comes over as smaller — crudely corrupt, artless in his political schemes, delusions of grandeur but no grandeur. It is astounding to watch as Erdoğan, who possesses the very soul of a mooching client, brazenly abuses the interests of those who prop him up in the service of his parochial self-aggrandizement.

And that is what Erdoğan is doing as we speak.

We do not yet know with certainty if Erdoğan was the object of a coup attempt last Friday or if the Islamist autocrat has just treated the world to another bit of the political theater — make that vaudeville — of the kind he uses to preface his purges. But that matters less than one might think when placed against the larger realities: This guy is now embarked on the final stage of his long campaign to turn Turkey into an Islamist nation. This seems to be it—the moment he has spent his political career preparing for. And as he witchhunts a nation of 80 million people, he is once again — and it seems to me willfully — playing Washington and the Europeans like violins.

The Obama administration gets the worst of it. Erdoğan, long consumed by vengeance and resentment, now demands that the U.S. extradite a Sufi cleric named Fethullah Gulen from his self-imposed exile in Pennsylvania. Gulen—moderate in his political views, patently opposed to violent political action and bearing no mark of Islamic extremism—is charged as the mastermind of last Friday’s events. It is shocking to watch President Obama parries Erdoğan as he persists with his extradition request—leveled with a veiled threat to scuttle the bilateral relationship entirely if Washington does not cooperate.

Hard evidence or no, I stand wholly with a well-connected source in Istanbul with whom I have had an extended email exchange since last weekend. “I don’t mean a total fabrication,” he wrote Saturday in explaining what had happened. “Probably more of a provocation and trap laid by Erdoğan.” Never mind what you read in the corporate press: These suspicions are widely shared, I am told, among diplomats with long records of Middle East service and some of the better people at State.
Recall for a sec: After the sarin gas attack in a Damascus suburb three summers ago, we were invited to ignore the astonishing clumsiness of the operation and accept the proposition that the Assad government gassed a nearby community just as U.N. personnel arrived to inspect chemical weapons inventories. It took the inimitable Seymour Hersh four months to trace the attack to Syrian provocateurs supplied with lethal gas canisters by none other than Erdoğan. Hersh, who speaks more truth than Americans are supposed to hear, publishes in The London Review of Books. His piece on the Damascus incident is here.

The ham-fisted farce in Damascus three years ago is my historical reference. It has clear echoes in last weekend’s events in Ankara and Istanbul, as I read it. Sinners can repent, as a friend kindly reminds me, but stupid is forever.

*
A shroud of anomalies and unknowns cloaks the events of Turkey’s latest “coup,” and I will dispense with the quotation marks from here on out. Cengiz Candar, a Turkish journalist exiled in Sweden, notes some of the most interesting in a piece published Sunday in Al–Monitor, a Middle East website edited in Washington.

“Why did the putschists—knowing that Erdoğan was spending his vacation in the Mediterranean seaside town of Marmaris—not move to detain him?” Candar asks. “They let him travel from Marmaris to the nearby Dalaman airport and then fly to Istanbul on a flight that took over an hour.”

He continues: “Why did the putschists not seize the main TV news channels and instead waste precious time taking over the least-watched state TV channel, TRT, allowing their targets to regroup and use more popular channels and social media effectively to challenge the coup attempt?”

There is no answering numerous such questions, at least for now, but neither is there any denying they require more investigation than American media will ever give them. Questions about the veracity of official accounts now evaporate in the press so the world may play Erdoğan’s preposterous game of pretend. The same happened, I will add, after a few correspondents with heads on their shoulders questioned why Assad’s people would launch sarin rockets over the heads of U.N. inspectors as they settled into Damascus hotels.

Erdoğan, who has faced mounting resistance from secularists, even within the governing party, now has the horsepower, as the Istanbul source put it, to ram a lot of anti-democratic legislation through parliament, where his Justice and Development Party has a majority. Already his universally anticipated purges proceed at an astonishing pace. By Wednesday morning those removed, arrested or both—soldiers and officers, police, civil servants, prosecutors, professors, political and business figures—approached 75,000. Bretton Woods Research, a U.S. firm that does macro work on political economy, reported that 7,500 judges are among this number. Teachers: 21,000 now gone; university deans: 1,500. Now likely to follow are constitutional revisions awarding the president unprecedented powers and “a series of show trials,” as my Istanbul source, who requests anonymity to protect his political contacts, puts it.

In fairness, the Obama administration inherited a relationship based on military convenience that has been flawed since its Cold War heyday. But he has ridden the same tiger. Think about this: Two years ago the Pentagon cut a deal allowing U.S. jets running bombing sorties in Syria to base at Incirlik, in southern Turkey. The U.S. still stores several dozen nuclear bombs there. The Turkish commander at Incirlik was just arrested as one of the coup’s leaders.

Now what, Mr. President? Humoring this frenzied dictator is good money after a lot of bad.

It is possible that a clique of military officers just tried to restore the army’s role in Turkish politics. Good enough, in such a case, that they remain confined to barracks. But there is ambiguity here: The army is the only institution left that can stand up to Erdoğan. It is by tradition secularist, and the officers now under arrest were quoted opposing Erdoğan’s rape of democratic process. This leaves Washington’s assertion of “absolute support for Turkey’s democratic institutions” looking convenient but pathetically threadbare. It weirdly mirrors where the U.S. stood after the coup in Cairo three summers ago, when Secretary of State Kerry applauded a new dictator for “restoring democracy” after he ousted the nation’s first democratically elected president. That was convenient, too.

As to the Europeans, last year’s agreement enlisting Turkey to stem the flow of Syrian refugees—this in exchange for two checks of $3 billion each and renewed talks on Turkish accession to E.U. membership—looks as craven as some observers (this columnist among them) argued from the first. “Relations with the E.U. are going nowhere,” my source in Istanbul wrote. “The U.K. was the biggest supporter of Turkey becoming a member. There’s no chance after this.”

I cannot decide whether the spectacle of another Islamist autocrat in the act of ruthlessly consolidating power while enjoying Western support is more repellent than familiar or it is the other way around. But how Washington and the Europeans field this embarrassment is only the most obvious question. There are others. Here are my three:

There are 85,000 mosques in Turkey, and the weekend’s events demonstrate the extent to which Erdoğan has turned them into mobilization centers in his long campaign to subdue urban secularists. My source in Istanbul asserts we are watching Erdoğan fashion “the Turkish version of the Islamic Brotherhood.” For good measure, he quotes an E.U. diplomat’s observation Saturday: “The Middle East just got one country closer to Europe.”

Erdoğan is a Sunni nationalist who supported the Islamic State until it bit him on the backside. This is a reality from which the Obama administration and its E.U. allies have averted their eyes for years. It just got a lot harder to flinch.