Inside Milo's "gays for Trump," virulently anti-Islam party at the RNC 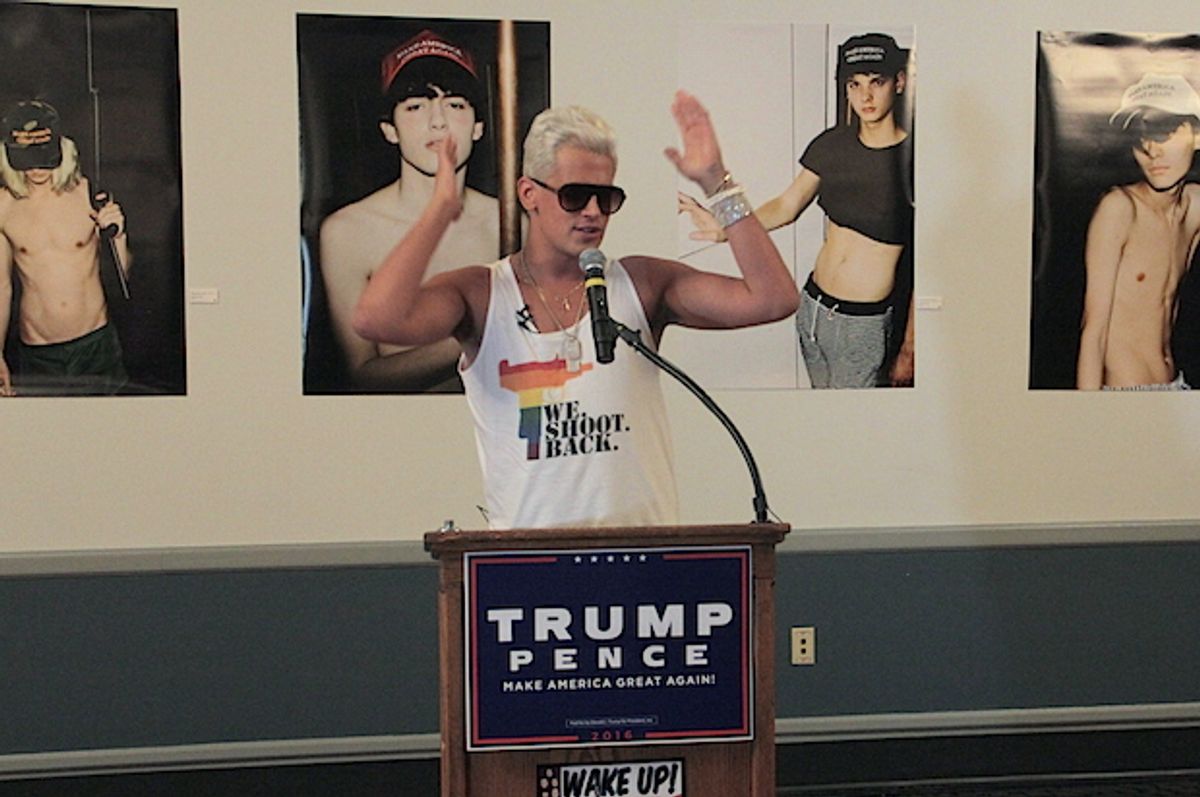 Milo Yiannopoulos at the "Wake Up!" pro-Trump, anti-Muslim LGBT party at the RNC (Salon/Ben Norton)
--

The most far-right party at the 2016 Republican National Convention may have also been the most pro-LGBT.

The rhetoric was strikingly reminiscent of the extreme anti-Semitism of the early 20th century, yet directed at Muslims instead of Jews. All of the speakers explicitly condemned Islam itself, not just Islamic extremism.

LGBT for Trump founder Cris Barron stressed the importance of defending "Western civilization" from the existential threat posed by Muslims.

Wilders spoke of a "war" against Islam. He proclaimed "Islam is the problem" and condemned refugees for turning Europe into "Eurabia."

Geller joined the speakers in applauding Trump's "ban on Muslims from jihad nations," which she called a "logical, rational and reasonable" policy.

Milo called Trump "the most pro-gay candidate in American electoral history" and proclaimed, "The left's stranglehold on homosexuals is over."

Not one speaker mentioned U.S. and European foreign policy and wars, instead conflating the Islamic extremism fueled by Western-backed military conflicts and the political Islamism spread by Western allies with the millennium-old religion practiced by 1.6 billion Muslims.

The speakers all also excoriated the left, which they accused of supporting Islamism and of valuing Muslims over LGBT people. The art used to publicize the event is a cartoon depicting Donald Trump as a superhero, joined by sidekicks Milo and Geller.

The party, which was officially named "Wake Up! (the most fab party at the RNC)," was a big event for the so-called "alt-right," a far-right movement that supports liberal social policies and portrays itself in certain ways as libertarian, but harbors some extreme right-wing, fascistic views.

A large yellow Gadsden flag reading "Don't tread on me," a common libertarian symbol, was in fact hung on the wall behind the DJ, but the speakers are people who have no problem with big government when it comes to Muslims and migration.

Unlike the so-called New Atheists, who claim they oppose all religions equally — although they reserve particular hatred for Islam and Muslims — the alt-right does not feign impartiality.

Milo mentioned his Catholicism, and Geller openly argued that Christianity and Judaism are better religions than Islam, insisting Islamic law subjugates non-Muslims while Canon and Jewish law do not repress those of other faiths.

Chris Barron, the founder of the pro-LGBT conservative NGO GOProud and the leader of the "LGBT for Trump" campaign, introduced the speakers.

Barron set the tone of the event right from the get-go, warning a "radical Islamic ideology" threatened LGBT Americans. He called it a "life or death situation."

Barron and the other speakers blamed the massacre at a gay nightclub in Orlando in June on Islam, although the U.S.-born shooter was likely himself gay and had previously attended the club. Additionally, a former gay lover of his called it a "revenge" attack.

Trump not only supports LGBT people, Barron claimed, but also employs them, "making gay people part of the Trump empire."

None of the speakers mentioned Trump's running mate, Indiana Gov. Mike Pence, although the Trump poster on the podium clearly displayed his name.

Protesters outside the event uniting under the name Queers Against Racism emphasized that Pence has a long history of openly opposing LGBT rights, including voting for legislation that allows business to deny services to people based on their sexual orientation and gender identity.

While they stood behind the Trump-Pence poster, all the speakers also stood in front of photography depicting young slim white men wearing "Make America great again" hats. These works are part of a series by art photographer Lucian Wintrich titled "Twinks4Trump." Wintrich told Salon he will soon be having a Trump-themed gallery exhibit in New York City's East Village.

Barron noted that the event was funded by far-right website Breitbart; Andrew Marcus, director of the film "Hating Breitbart"; and Mike Flynn, the founding editor of Breitbart's Big Government blog, who passed away in June. Barron also thanked Fox News for its support. Geert Wilders, a far-right politician from the Netherlands who has frequently been described as a fascist, was the first to speak at the party.

Barron introduced Wilders as the "hope for Western civilization," rhetoric the Dutch leader himself frequently uses.

Wilders opened his speech warning Europe has been turned into "Eurabia," due to Arab and Muslim migration.

"Europe is imploding," he claimed, adding it has been flooded with "jihadis."

"It will only get worse," Wilders insisted, because Europe's "stupid governments" keep letting in refugees from Muslim-majority countries.

He called open borders "the worst policy ever." He also condemned "cultural relativism, the biggest disease in Europe today."

Wilders claimed refugees and migrants are not integrating and assimilating into white European culture, leading to a "suicide policy."

The far-right Dutch leader stressed that the enemy is not just Islamic extremism, but Islam itself.

"Get rid of your political correctness," Wilders declared, as the audience went wild. "Islam and Sharia law are exactly the same," he said, warning Americans not to "allow Islam to be planted in your soil."

He accused Muslim migrants of being behind an "explosion of crime, rape... of harassment of our daughters, of the gay community."

"We are at war," Wilders proclaimed and reiterated, claiming Sharia law is being implemented in Europe and the U.S.

"Islam is the problem," he stated clearly, condemning "bullshit about 'radical Islam.'" The audience applauded loudly, and a young man with a Trump hat on shouted, "Send them back!"

"I don't want any more mosques in the Netherlands," Wilders said. He proposed closing borders to Muslim refugees and migrants and deporting those in the country. Then the government should "de-Islamize" society, he said, not expanding on what exactly he meant.

Wilders called for electing new far-right leaders. "We are no longer represented," he lamented, and boasted that his far-right Freedom Party is on the verge of taking state power, having topped the polls for a year.

"We have no alternative," Wilders concluded. "We will win this war." Pamela Geller, a leading figure in the anti-Muslim hate movement in the U.S., was next to speak.

"Pamela has been fighting against the jihad for several years," LGBT for Trump founder Chris Barron said as he introduced her.

In May 2015, Geller and Wilders were attacked by Islamic extremists at a "Draw Mohammad" event in Garland, Texas. Geller said the "Wake Up!" RNC party was her first public speaking engagement since the attack in Garland.

Geller opened her speech with a joke: "A jihadi walks into a gay bar," she began, to laughs from the audience. What does he order? "Shots for everyone," she said.

The room erupted in laughter. Geller replied, "It's not funny, because it's true."

She said she supports Trump, LGBT rights and "freedom," proudly calling the Republican Party "the party against jihad."

Geller — who backs a presidential candidate who wants to deport 11 million people and ban refugees from particular racial and ethnic groups — went on to accuse the left of becoming "increasingly authoritarian."

"You've got to love Trump, 'cause he gives them all the middle finger," she said simultaneously. "His ban on Muslims from jihad nations is logical, rational and reasonable."

Geller criticized more mainstream right-wing pundits like Bill Kristol. People in the audience shouted "cuckservative" (a popular insult in the alt-right) and "traitors!"

At one point, she stopped her speech to join the audience in a "Trump! Trump!" chant.

The GOP supports "equality for all," she claimed, ensuring "no special treatment for special classes."

The left, she added, is embracing Islamism. "It's not PC; it's Sharia," Geller said. In his speech, Milo Yiannopoulos reaffirmed many of the same points, with his characteristic narcissistic flair.

Barron introduced the Breitbart columnist as "the world's most dangerous faggot."

"It's a war," Milo began his speech, "a culture war." He insisted that politicians should stop talking about economics and politics and instead talk about culture.

Milo argued that the left no longer defends LGBT rights, that it is only the right that does so.

"Radical Islam, or let's say it, Islam" threatens gay people, he said, while the left is "welcoming a religion that wants us dead."

Muslims are fundamentally incapable of integrating into capitalist democracy, Milo claimed, which he called "the only system that works."

Milo, who is British, pointed to Europe as a "warning" to Americans. He said he will soon be traveling to Sweden to lead "a gay pride march through the Muslim ghetto in Stockholm." A man in the audience shouted, "Bring bacon!"

Unlike the other speakers, who focused almost exclusively on Muslims and the left, Milo also made his hatred of journalists very clear.

"Most journalists are idiots," he stated casually. He later swore that he is "dedicated to the destruction of liberal media."

"I have the entire American media at my disposal," he taunted at one point, listing the leading news outlets who had reporters at the party. "Fuck the lot of you; fuck you," he said to the room full of journalists.

Milo accused the left of "shutting down free speech" with political correctness. To the room full almost exclusively of white people, he joked about his sexual preference for Black men, claiming they have big penises and do not know who their fathers are.

Trump is "the most pro-gay candidate in American electoral history," he asserted.

"The left's stranglehold on homosexuals is over," Milo concluded, summarizing the underlying thesis of the event. Outside of the event, in the early hours of Wednesday morning, protesters could be heard chanting "8-6-4-2, if you love Trump we don't love you!"

Salon spoke with a protester who declined to be identified. "We heard there was a gay pro-Trump event and we were like, hell no!" she explained.

She said the demonstration was not organized by a group, but rather by a collection of individuals. The protesters were from all around the country, not just Ohio, and had convened to protest the RNC.

The protesters did not like speaking with the press, so they passed out a "Queers Against Islamophobia, Racism and Fascism" handbill reading:

"There's nothing fabulous about racism. You can't hide racism and Islamophobia behind gayness.

Our grief is not a catalyst for xenophobia. We will not be opportunistically used to promote Trump's rhetoric of hate.

What happened in Orlando is a result of a homegrown culture of homophobia promoted by Trump, Pence and conservatives for decades.

Racism and xenophobia further erodes the safety of LGBTQ people, many of whom are Muslims, refugees, immigrants and people of color.

We will fight for the liberation of all people!