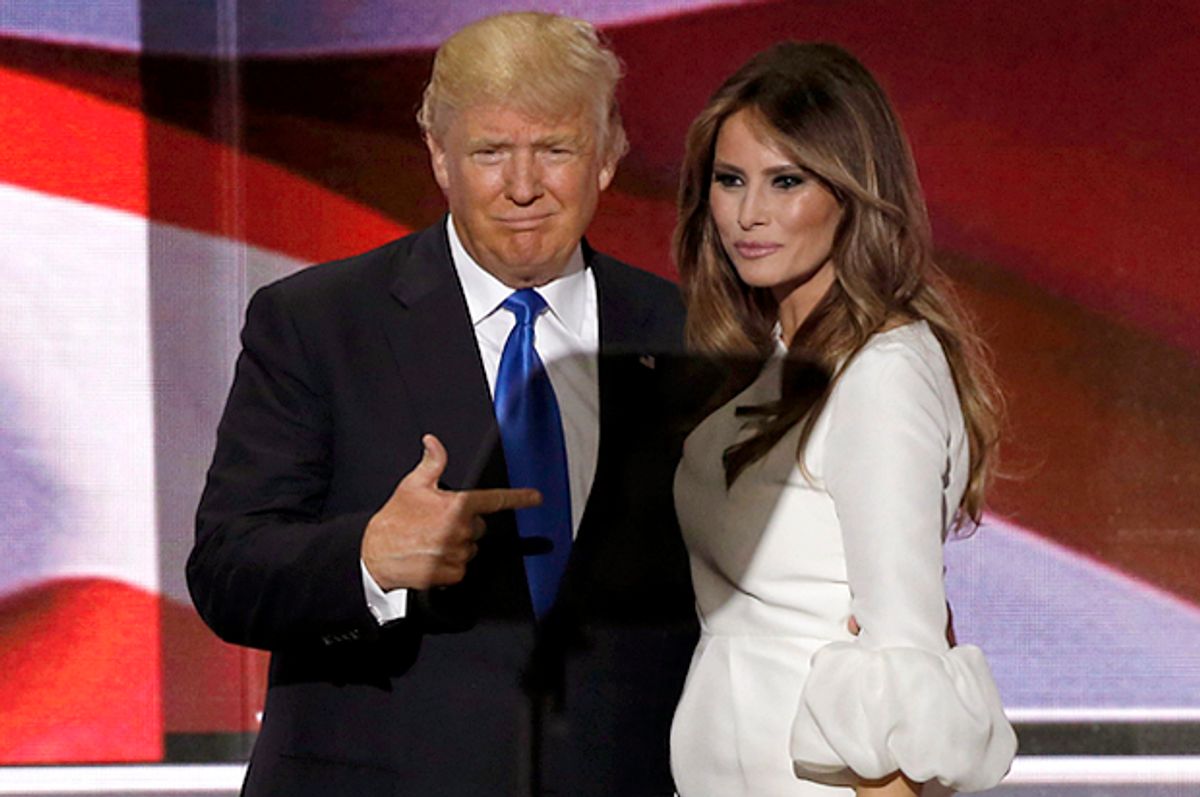 CLEVELAND – By now we expect it. An amateurish non-campaign from the start, Trump has never taken the process seriously. He has very little infrastructure, an infinitesimal staff, no voter targeting scheme, and no digital operation to speak of. For all intents and purposes, Trump has been winging it since he launched his campaign a year go.

But what happened on Monday night was needlessly stupid, even by Trump's admittedly low standards. Melania Trump gave the headline speech of the evening, a speech that was prepared by staffers days, if not weeks, in advance. Nevertheless, whole paragraphs were essentially lifted from Michelle Obama's speech at the 2008 Democratic convention.

The Trump campaign has responded clumsily. At a morning briefing, campaign manager Paul Manafort denied reality and instead deflected blame to Hillary Clinton. “This is once again an example of when a woman threatens Hillary Clinton, she seeks out to demean her and take her down,” he said. “It's not going to work against Melania Trump.” The official line is that it's “absurd” to suggest that Melania plagiarized. After all, we're only talking about a couple paragraphs here. As Chris Christie later put it, “93 percent of the speech is completely different than Michelle Obama's speech.”

I won't bore you, the dear reader, with a pedantic definition of plagiarism. But I'll say this: I was a teacher for several years - I know what plagiarism looks like. If 7 percent of an essay or speech is plucked from another author, that's rank plagiarism.

By itself, Melania-gate is embarrassing, but hardly a catastrophe. Given the enormity of Trump's gaffes during this campaign, this is minor by comparison. On the ground in Cleveland, however, there is a lingering doubt, which was palpable before Melania's speech. Establishment Republicans are doing their best to wear a happy face. Most of them didn't want Donald Trump to win the nomination, and that's especially true of elected officials. But they're stuck with him, and so feigning enthusiasm is the only option at this point.

But Melania's speech has strained those efforts, however faintly. It's not so much that she plagiarized Michelle Obama; it's that the Trump campaign was incompetent enough to let her. For Republicans already struggling to take Trump seriously, this was a reminder of a fact they're trying (successfully) to ignore: Trump isn't serious and his campaign is laughably unprofessional.

I spoke with two Republican delegates on Tuesday afternoon, neither of whom wanted to be named in this piece. One delegate was uncommonly blunt: “It's dumb. I can't defend it. The worst thing is, it adds to this belief that the campaign is a farce, which isn't true. I'm a lifelong Republican and I've never seen anything like this. It just makes the entire party look terrible.”

Another delegate struck a similar tone: “I just don't understand how this happens. This is why you have people vet and review speeches. This probably doesn't change anything as far as the overall race goes, but, honestly, it sends a bad message to the country about the kind of candidate we're backing.”

There were plenty of delegates, likely the majority, who were dismissive of the Melania story. One told me that "this is a media-fueled ploy to damage Trump," and that "conservatives know better by now." The most common response, as reported by Vox's Jeff Stein, was that Michelle Obama doesn't own the language and that, despite the parallels, there's no evidence Melania "deliberately" lifted the speech. It's hard to know how much of this is genuine and how much is obligatory defensiveness, but there's no doubt many of the Republican attendees were determined not to take the bait.

I've no idea how pervasive the skepticism is among delegates, but if you watched the other speeches on Monday night, you might have noticed the unease on many of the faces in the crowd. The string of contrived speeches from B-listers felt different. It was apparent that Trump isn't a normal candidate and this isn't a normal convention. Many of the GOP's most prominent figures declined to attend precisely because they knew this would be a spectacle. And that's exactly what it appears to be.

The plagiarism story is the latest con in a campaign that is itself one long con. To the extent that Monday night confirms that narrative, it's a big deal. Will it matter to the Republicans in Cleveland? Probably not. But it might to everyone else.