Melania's speech mess: Why you shouldn't rule out that it was an inside job

Melania's plagiarism scandal may be a non-issue for Trump die-hards, but it is indicative of the company he keeps 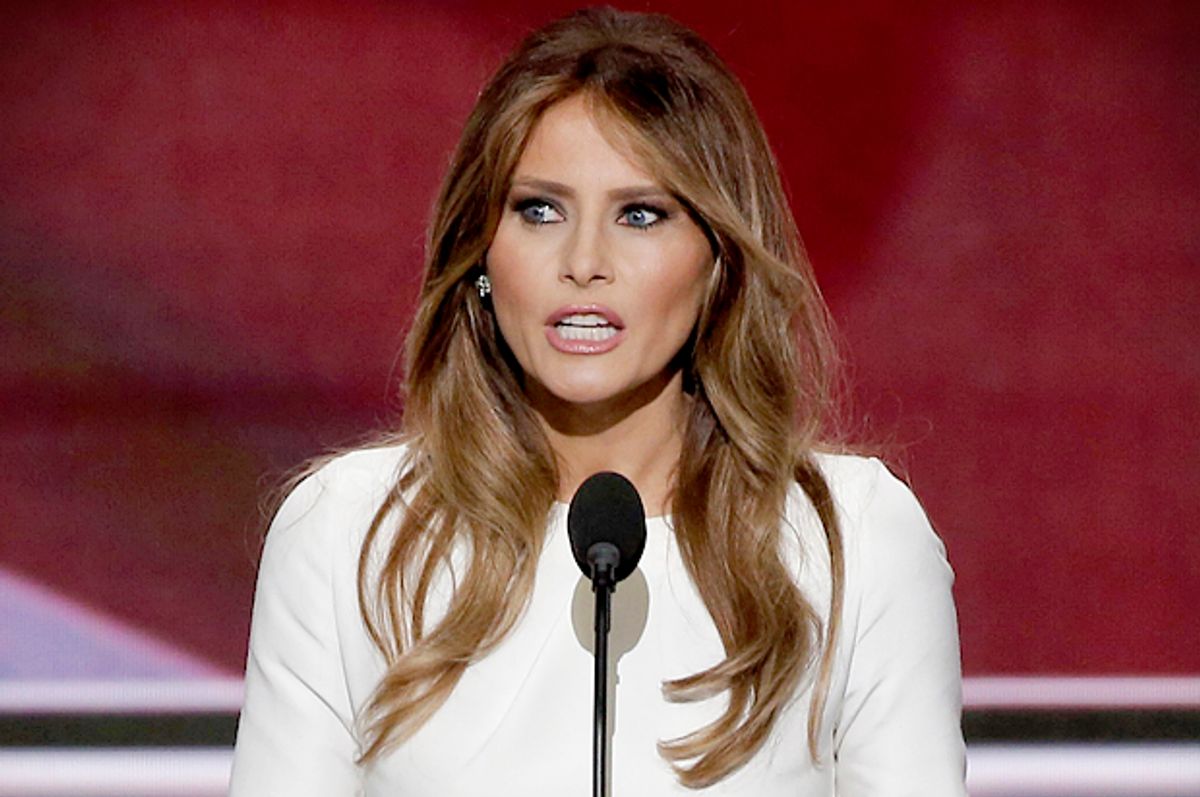 Let's for a moment concede that Melania Trump's RNC speech wasn't a soft coup d'état by disgruntled Trump staffers who chose to deliberately and obviously embarrass the nominee's wife in order to derail the convention. Let's also agree that Trump's writers were pressed against a hard deadline and, lacking rhetorical spark, chose to secretly borrow key paragraphs from Michelle Obama's 2008 convention speech.

Frankly, I don't think it went down that way at all, and at the risk of appearing conspiratorial, I tend to believe this was an inside job. Even if the report from NBC News exonerating speechwriter Matt Scully is accurate, it's difficult not to conclude that the plagiarized portions must have come from another source within the campaign rather than from Melania herself.  It had to have been friendly-fire payback against Trump by staffers who felt slighted in some way, so they ripped off the passages in question from a really, really obvious source and punctuated it all with a reference to Rick Astley and the now universally well-known "Rickroll" prank — just to insure that social media and the political press caught the plagiarism. (Melania's speech included the sentence, "He will never give up, and most importantly, he will never let you down," which closely resembles the chorus from the Rick Astley song/meme.)

Let's go with the innocent mistake theory anyway. The serious question, therefore, has to be: How the hell did they believe no one would notice?

For the sake of underscoring what happened, here's the most flagrantly stolen sentence:

Melania Trump: “We want our children in this nation to know that the only limit to your achievements is the strength of your dreams and your willingness to work for them.”

Michelle Obama, 2008: “We want our children — and all children in this nation — to know that the only limit to the height of your achievements is the reach of your dreams and your willingness to work for them.”

Any sane adult can plainly see this wasn't coincidence. Additionally, it wasn't stolen from a mid-level state politician, it was taken from one of the most historic convention speeches of our time, delivered by the eventual first African-American First Lady who Trump and the Republican Party have relentlessly demonized almost as much as President Obama himself. The irony is as thick as the pilfering itself, but the true keyword in this matter has to be "incompetence." Set aside the Rickroll, which, reasonably speaking, could've been a coincidence. Assuming the speech was written by Trump's writers and not Melania herself, were they unaware of what social media is all about? That social media is built upon the practice of micro-analyzing everything that happens everywhere?

Along those lines, it's possible they figured someone might notice but that it simply wouldn't matter. In other words, the surface tension of the Trump/Fox News bubble is so unbreakable that any fringe accusations of plagiarism would fall on deaf ears as just another plot by the liberal media to screw the GOP nominee for president. Indeed, Trump's various surrogates made the rounds on cable news Tuesday morning, to establish just enough reasonable doubt as to exculpate Melania and the Trump campaign from accusations of theft. Chris Christie was perhaps the most flagrant obfuscator, suggesting that 93 percent of the speech wasn't stolen. This is good news for thieves who merely rob people of seven percent of their property.

Sadly, the scandal will have very little impact with Trump loyalists, who are so ensconced in the throes of Obama Derangement, and drizzled with a healthy portion of fetus fetishization that nothing will sway them from their Trump zeal. The rest of the nation, meanwhile, will likely forget that it happened, especially when the next big news story draws our attention away. There's a solid chance this was part of the calculus within the Trump campaign: at the end of the day, it simply won't matter.

But let's say it does, and Trump's numbers begin to evaporate due to this colossal eruption of incompetence by Trump's staffers. Such incompetence ought to undermine Trump's entire campaign, and here's why. Generally, when we hear about folksy candidates like Trump, George W. Bush or even Ronald Reagan, we're told not to worry because they'll hire wise old men — policy wonks and political insiders to make key decisions about topics such as our nuclear triad, which, by the way, Trump was unaware of as recently as December.

There's no evidence whatsoever that Trump is capable of hiring competent staffers. In the past, Trump hired Dr. Ben Carson to spearhead his vice presidential search team, even though Carson nose-dived his own campaign with bizarre rants including one in which he stabbed someone as a kid, and another in which he claimed to have aided a robbery at a "Popeye's organization." There's Corey Lewandowski, Trump's former senior adviser, who manhandled a female reporter and was eventually fired because he wanted to leak the name of a vice presidential contender — weeks after Carson accidentally did the same. And now, it's becoming increasingly clear that Trump hired a writing staff that deliberately (or accidentally) sabotaged Trump's own wife. How, in any universe, is this acceptable?

The question, therefore, needs to be asked: if Trump can't hire people to successfully pen innocuous remarks for his wife, how can we expect him to hire people to advise him on issues such as ISIS or job creation or the climate crisis? Clearly we can't.

Day one of the Republican National Convention was precisely indicative of what we can expect from a Trump presidency. We can expect reality show celebrities; we can expect turmoil and disunity within the GOP itself; we can expect raging hatred and megalomania; and, worst of all, we can expect rank incompetence of the highest order. The worst aspect of Trump’s incompetence is that millions of disgruntled baby-boomer men, along with racist red state zealots, will backstop Trump's ineptitude no matter what, virtually denying it exists, or by deflecting to alleged incompetence by the Obama administration.