Politics are a family affair: What you need to know about Trump's sons Eric and Don Jr. 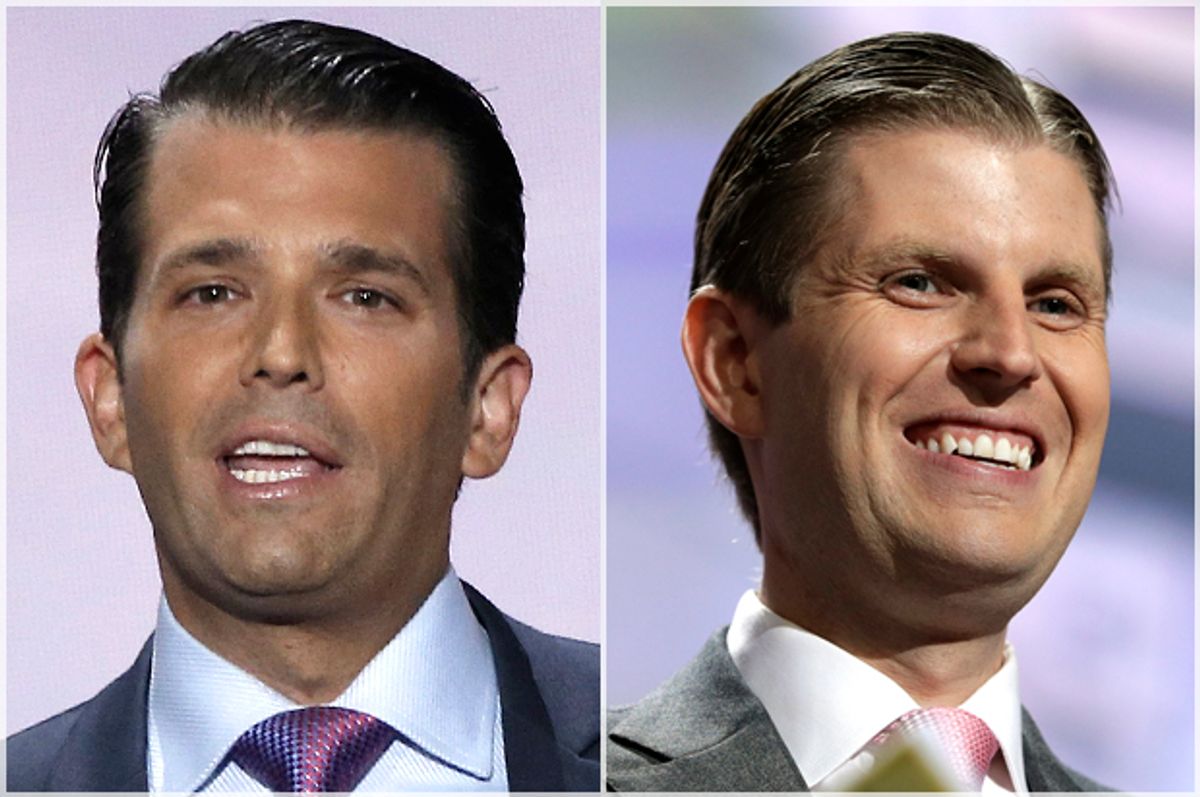 Republican presidential nominee Donald Trump has five children, all of whom except his 10-year-old son will have delivered speeches by the end of the Republican National Convention. Last night, his oldest son, Donald Trump Jr., delivered a speech, and tonight, Eric Trump will take the stage. Here are some things you need to know about them.

1. In an interview with The New York Times in 2006, he said, “In a way, [Donald Jr.] raised me. My father, I love and I appreciate, but he always worked 24 hours a day.” This seems to fly in the face of the story Tiffany Trump told last night of her father being extremely present in her life.

2. Donald Jr. and Eric are both big game trophy hunters. In 2012 they came under fire when pictures of them on an African safari surfaced on the internet. Trump Sr. told TMZ at the time, “My sons love hunting. They're hunters and they've become good at it. I am not a believer in hunting and I'm surprised they like it."

3. While all three of the oldest children work for Trump, Eric is in charge of the Trump winery and golf courses (like the one recently opened in Scotland, site of the Trump news conference on Brexit). Eric was named Rising Star of the Year in 2013 by Wine Enthusiast Magazine.

4. Eric married Lara Yunaska, a producer for CBS Inside Edition, in 2014 at the same beach resort in Florida where his older brother got married.

1. Don Jr. is married to model Vanessa Haydon, and the couple has five children. Haydon was introduced to Don Jr. twice in the same night by Donald Sr., but it took a third introduction by a mutual friend weeks later before they actually started dating.

2. One of his sons is named for his maternal grandfather, Milos, with whom he was very close. In fact, it was Milos who gave Don and Eric their love for hunting.

3. The three oldest Trump children all work for the Trump Organization and none of them were really the rich-kid wild child you might expect. Don Jr. credits this to his parents making them earn their pocket money as teens: “If there was something we wanted, we had to earn it. Even in college, we were very fiscally responsible. I had 300 bucks a month — anything I wanted beyond that, I had to work for.”

4. That being said, Don Jr. took a year off after college and stayed in Aspen, Colo., drinking and partying. “I had a great time,” he says, “but your brain starts to atrophy. It just wasn’t enough for me.”

5. Don Jr. was featured on "The Apprentice" as a boardroom advisor, along with his brother and sister, Ivanka Trump. “It’s an hour-long infomercial,” Jr. said of the show once. “People pay millions of dollars for a 30-second advertisement, [and] we get to be on it for a full hour promoting all our projects.”